Much has been happening in Frome as September ends. There's been a carnival, a climate strike in the streets, music sessions - including Pete Gage band at the Grain Bar Roots Session - and all kinds of other livelinesses but this bulletin will digress to a brief account of sunny Spain, as viewed from a motorhome travelling through landscapes ranging from beach to mountain, trees to towns, with long walks and lingering tapas meals... a holiday, in other words.

Here's a whistle-stop tour of our fortnight: 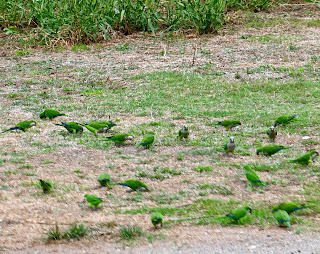 From an excellent coastal start in Torre del Sol (where wild parrots outnumbered tourists, and a Stones cover-band played at the beach bar) we headed to the Sierra Nevada mountains and explored the 'whitewashed village' of Güéjar. The church here seemed to have been hijacked from moorish origin by the addition of a bell-tower, but the spirit of rebellion is still healthy - there's an avenue dedicated in 2015 to all victims and one of the street statues was sporting a flag in support of the November 25th International Day of Elimination of violence against women. 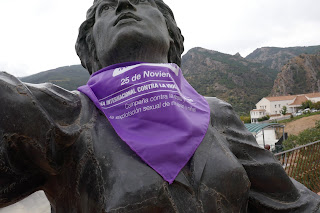 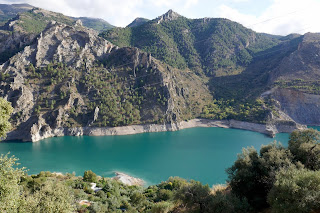 After driving to the Sierra Nevada summit to gaze at the awesome views, we turned back south and spent several days in Ronda walking the lanes that circle the town which give far more impressive views of the famous gorge than the over-popular bridge, and enjoying excellent 1€ cortado coffees at the Bodega San Francisco. 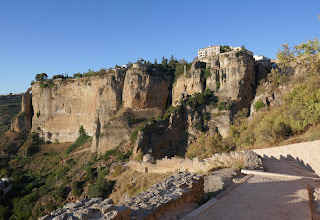 The next plan was to find a campsite near enough to Seville to take a bus into the city, but as the temperature was edging up to 30° that day, we opted instead to use the pool - 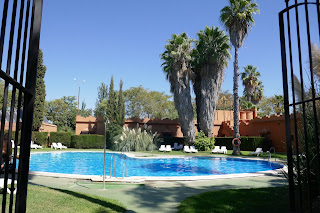 - and next day headed south-west to just north of Cadiz, past the parque natural, to a remote but lovely campsite by a long soft sandy beach that offered a 3-kilometre walk to Sanlúcar.  In the other direction a stroll brought us to a tiny clifftop bar perfect for watching the sunset as local children played on the beach. 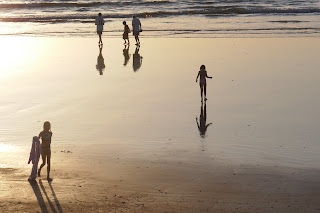 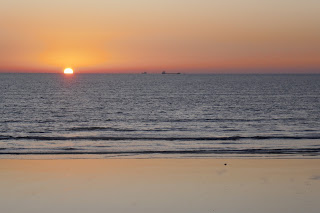 An even shorter walk from our (exclusively Spanish) site took us to a tiny village where no-one spoke any English at all, so shopping and tapas meals were a combination of my pidgin Spanish, the odd bit of Googling, and a lot of smiles and nods. 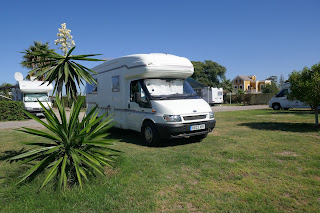 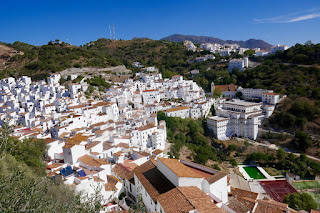 We found an Aire on the outskirts of Casares, now a lively town but still with its ancient castle and with views right across the hills to the rock of Gibraltar. Our camping area doubled as an ornithological centre and we could watch the Leonardo vultures slowly circling above.  Here also, at El Rincón de Zoya, we had a tapas so splendid I broke my no-pitctures-of-meals rule... 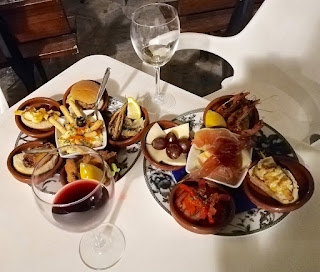 And then it was back home via Malaga airport for me, as the motorhome trundles on the rest of its holiday journey. Normal service will be resumed in the next blog. In the meantime feast your eyes on a few of my Spanish highlights...
Posted by Crysse at 10:14 PM