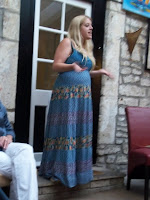 but Liv Torc guesting at Words&Ears in Bradford-on-Avon looked like a don't-miss event, so Muriel Lavender and I went along to hear the Wondermentalist poet whose website mission statement pledges Liv Torc seeks the humanity and absurdity within the human condition and when she finds it, she strips it naked and kicks it...
The Asbo bard did not disappoint. Kissing, beards (nastiness thereof), the wet patch (its charm), love generally and Amy Winehouse in particular, Liv is empathetic and enchanting. 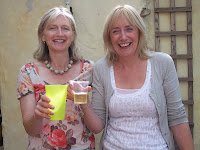 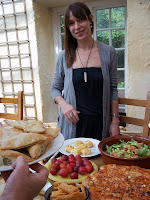 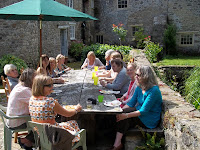 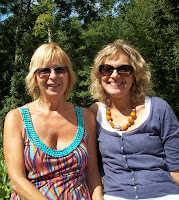 To be fair to the English weather, although it's rarely fair to me, we've had some lovely days since my return, one of which occurred for the Writing BootCamp picnic party. This has been the summer inspiration of Alison Clink and Frances Liardet, whose lovely house we've weekly invaded for intensive inspections of work-in-progress.
Around two dozen local writers (I told you Frome was prolific, didn't I?) arrive at these sessions to share current work, pitch projects, and generally expose our vulnerable authorial bellies for the compassion, and passion, of like-minded scribes. Groupings - there are obviously several, with such high numbers of participants - are by lot, but always seem to provide the right mix of diversity and empathy. So here we are, some of us at least, celebrating this amazingly egalitarian and supportive experience, a summer Boot Camp with flip-flop friendliness, marching us all on to further writerly achievements. 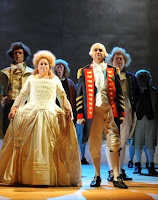 The Madness of George III, directed by Christopher Luscombe for the Peter Hall Company at Bath Theatre Royal, is not as much like the Nigel Hawthorne/Helen Mirron movie as you might expect. Alan Bennett's script is clever and dazzling, of course, with intriguing insights into 18th Century attitudes to politics, medicine, and manners, but the focus here is on spectacle. Characters place themselves like playing cards lined up for an elaborate game and there’s no pretence of natural interaction as they deliver their lines. Scenes are static, so static that the production seemed almost like an elaborately costumed play-reading – but hey, hey, as the Farmer King would say, what costumes! Gillray lived and breathed through the Prince Regent and his coterie.
In a big bland theatre with a vast stage to fill this was probably the best strategy, and evoked a sense of Shakespearean drama, from the broad comedy of the kings poo to the tragedy of his downfall into lunacy. George recalls Richard II in his collapse to the ground to tell sad stories of the death of kings, and the parallel is plangent in a late scene as he reads from King Lear.
George III is a fascinating character, sane or mad: grieving for the lost colonies of America in a John of Gaunt-like speech, childlike games of Mr and Mrs King with his unerotic but much-loved wife, and plaintive repetitions of “I am the King!” as sanity spirals out of his grasp and his people slip away from his control. A thought-provoking, splendidly visual, evening with a first class cast – especially the king himself, played due to illness by understudy Simon Markey who was promoted from footman for the occasion and received well-deserved cheers at the final curtain. 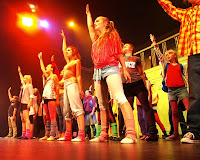 And to round off the week: The Merlin Young Company presented their production of Fame, unbelievably well choreographed and performed after an incredible two-week-only intensive workshop. 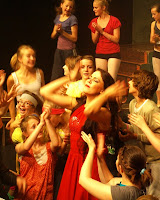 A full auditorium laughed and wept and cheered the huge cast of energetic youngsters who sang and danced their way through this iconic 80s story making it fresh as tomorrow, the hiphop dancers adding especial vibrancy. Ensemble sets fantastic, and especially moving performances from young Dillon Berry, Matt Graham as the shy thespian, and Kara Horler as Carmen. Claudia Pepler, who directed the show, should be proud as well as delighted. (Thanks Mike for the pictures)
And on the way home we called in at The Cornerhouse, Frome's favourite live music pub, where the John Law Trio were making amazing jazz with luschious singer Emma Harris.
This is Frome on a Friday night - nothing bought in, all local produce.
Now I don't mean to be boring but honestly, where else in the world.....

I began my second week in Cortijo Romero with a bang – on my head, caused by reckless lane-leaping and resulting in a trip to Motril hospital with Maggie for an x-ray. My Spanish doesn't extend beyond bright & benign holas and gracias, but I could tell from the sniggers that Maggie was repeating the tale of the fig-scrumping granny with gleeful relish. 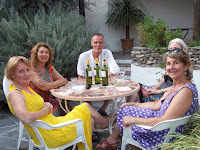 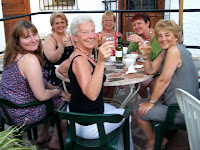 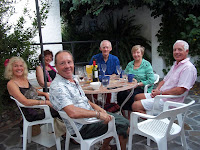 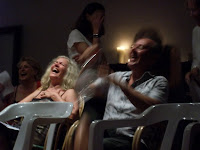 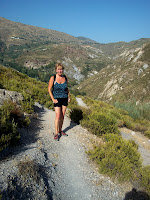 Luckily no repercussions ensued, other than the obvious teasing, and I was back in time for supper with the new group.
There seems to be a special energy for writers at this venue, perhaps something to do with the calm of our moorish work room, the inspirational gardens, physical stimulation of yoga and pool-play, and the nourishment of knowing that amazing meals will frequently appear... Or maybe the people who are drawn to find their writing voices in this venue are simply exceptional people, open-minded and open-hearted. I'll remember this group for its wonderfully varied explorations of mood and style, and huge mutual support. Which is what makes it all happen, so mega-thanks Ray, Jacqui, Russ, Annette, Lucy, and Pauline - and everyone else too, for walks, talks, word-'tasting', and companionship.
I especially like the image (below) of popular facilitators Tristem and Yvonne enjoying the cabaret interpretation of their yoga sessions.. and I've loved the long walks into the foothills along the acequias - ancient moorish irrigation routes still used today. 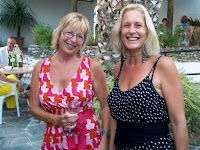 And when not in the Alpujarras I’ve been in New York – in 1909 Manhattan, to be specific.
I don’t usually do book recommendations here as there are so many sites devoted to reading & reviews, but The Interpretation of Murder achieved the near-impossible, creating a world almost as vivid and irresistibly compelling as Cortijo Romero. Probably the best novel I’ve read this century, it's a murder mystery narrated from various viewpoints with cliff-hanging intensity, solved through a mix of psychological and Shakespearean analysis; real events and social history are entwined inextricably with dramatic – and melodramatic – inventiveness. You can get a taste of the style here - I was hooked from that opening paragraph. Author Jed Rubenfeld's exploration of the psyches of Freud, Jung and Hamlet shows inspiringly how personal specialism can enrich fiction.

Home now, scampering to catch up with all that's occurring in & around Frome - including next month's Poetry Platter at the Merlin, featuring Elvis Mcgonagall, World Slam winner, festival favourite, radical rhymester of Radio 4, and standup comedic genius, of whom it has been so rightly said: "If poetry is the new rock'n roll then Elvis is Elvis". I'm so excited I managed to twist his arm, bite his ankle, and generally pester him into agreement to be our guest, and look forward to a brilliant night. If you're anywhere near Frome on 29th September, Merlin stage is the place to be - seats severely limited so do book! 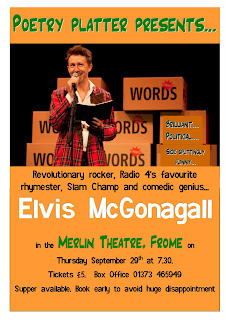 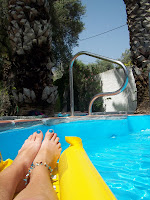 Being Here in Andalusia – the apt and delightful name for last week's session in Cortijo Romero – was sheer bliss. Most of the group has gone now, no longer singing I believe I can fly while dancing in the pool but actually doing so, heading back to UK debris and political post-mortems, leaving only six of us to meet the oncoming group. Strange how much you can miss people after only a week, still glimpsing their smiles everywhere… the laughter of last night’s cabaret seems still plangent in the air. Hazel Carey, our amazing & incomparable group leader, left early in a taxi, her tap-dance razzle dazzle still glittering in the full moon sky.
And what, apart from dance, song, yoga, and creative play, does being here mean?

No riots, no rain, only the fireworks of fiesta
and a solidity of sunshine. We cut it in slabs,
munch it all day, garnished with mountain herbs.
We write wish-lists of beautiful aspirations,
wanting almost to hide in this light,
so luminous are we, basking, floating on water,
watching dark shadows and the rustling fronds of the palms.

No dramas this week so here's a miscellany of random writerly snippets. As a starter: for collectors of curious words, I offer you the paraprosdokian, meaning a figure of speech which takes a surprising turn, like I want to die in my sleep like my grandfather, not screaming and yelling like his passengers, and The last thing I want to do is hurt you but it's still on the list, or I asked God for a bike, but God doesn't work that way so I stole a bike and asked for forgiveness. So now when you see those irritating office signs You don't have to be mad to work here - but it helps! you can say "Is that intended as a mission statement or merely a paraprosdokian?"

Moving swiftly on, I'm Abegail Morley's featured poet this month - a real privilege as Abi's book with Cinnamon Press How to Pour Madness into a Teacup was shortlisted for the Forward Prize Best First Collection.

the very wonderful Elvis McGonagall is feature poet at Poetry Platter at the Merlin on Tuesday 29th September. Stand-up poet, revolutionary, rocker, and frequent contributor to BBC Radio 4’s “Saturday Live”, Elvis is a World Slam Champion and internationally popular performance poet - this is a fantastic opportunity to enjoy this “brilliant, political, and side-splittingly funny” poet sharing his lyrical and witty views on life in the intimate space of our very own onstage Poetry Café – with real supper!

And before the season of mists and mellow fruitfulness brings clouds that blooms uncomfortably close to the soft-dying day, I'll have another taste of sun on Kalymnos with a new holistic holiday centre, Greek Retreats, which looks just idyllic.

And now I'm off, going where the sun keeps shining and the weather suits my clothes. Dawn tomorrow will see me over Bristol, backing off of the Northeast wind, sailing on a summer breeze and skipping over the ocean like a stone, leaping from Keats to Midnight Cowboy in my excitement. Tomorrow night I'll be in beautiful Cortijo Romero in the Andalucian mountain region where signal is flaky at best so if everybody's talking at me I may not hear a word they're saying. I'll miss you all madly, but only for a couple of weeks - speak then.

Posted by Crysse at 1:00 PM No comments: