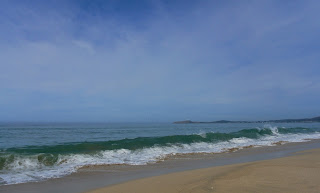 Just south of San Francisco there's a five-mile crescent of champagne-pale soft sand, and at the northernmost tip, behind the headland from Mavericks beach - one of California's top beaches for surfing - a small community developed in the last century as a seaside resort. It has a 'concentric circle street planning' (very easy to get lost in, if you were wondering) with wide avenues of eucalyptus trees, and a coastal path runs alongside the beach, between the sand dunes and the mega-busy Highway One running down the Pacific Coast all the way to Mexico.  Around 5000 people are lucky enough to live here, and I've been lucky enough to visit annually for the last five years.
This year, as usual, my plan was to walk and to write and enjoy the incredible beauty of this peaceful place, but somehow all I've done for a week is walk and take pictures. 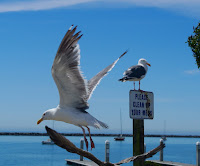 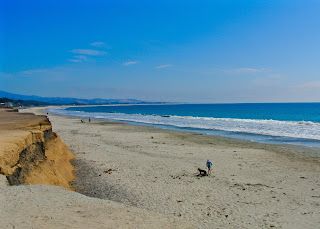 For around five or six hours every day,  I've walked along beaches and coastal paths and across Pillar Point bluff: I've pictured seals & pelicans, flowers & butterflies, rabbits and even a racoon as well as long views of rolling waves and closeup patterns on sand and bark... peaceful solitary days, supplemented with some pleasant interaction: a yard party and folk concert on Saturday ~ here's my generous friends' lovely home, and my host Mo Robinson headlining with harmonies from Peter Bland, 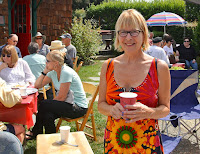 and a few of the images that stay with me, along with songs like Sunny Afternoon, Hotel California, and a phrase from a poem by Pablo Medina: what the ocean says, and says again and then forgets. 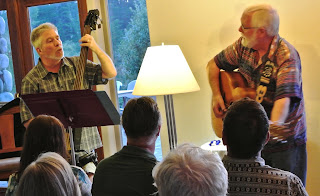 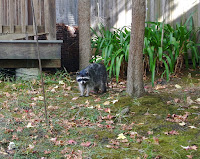 Posted by Crysse at 8:51 PM No comments:

Email ThisBlogThis!Share to TwitterShare to FacebookShare to Pinterest
Labels: California

As blackberries ripen and August ends... 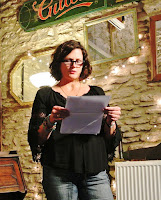 It's that heavy end of summer now, fields stripped down to cornrow ridges and the verges decorated with silver thistledown & bright red hips. Autumnal, in short, but a pleasant aftertaste of  the summer festival this week: readings from the Writers in Residence event revealed the impressive inventiveness mustered on sight by the phrase 'It was a chance meeting that changed everything". Impromptu tales penned in shops and cafes, romantic, historical, poignant, quirky and very funny, were all shared at the Bell in Buckland Dinham on Thursday night in a delightfully laid-back event hosted by Sue Watts for Frome Writers Collective. Here's Nikki Lloyd reading her winning story, about the relationship between two women revealed with beautiful delicacy and an unexpected ending. 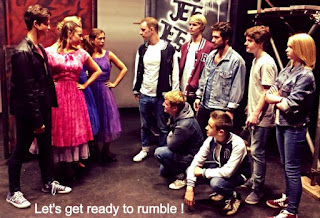 And what can I say about the Tri-Art Summer School production of West Side Story at Merlin Theatre except that it was a spectacular triumph, thoroughly deserving the standing-ovation applause of each full-house audience: a vibrant ensemble show that dazzled from the opening chords of  the overture to the moving final moment, with funky dance routines, superb voices, fabulous costumes, great filmic visuals, and a stark set that cleverly utilised mirror effects to increase impact.  The boys' gang set pieces were terrific but even more impressive were the girls: I like to be in America and I feel pretty were absolute highlights, as was the poignant duet between Maria (Tabitha Cox) and Anita (Marie-Claire Wood) after the street killings. 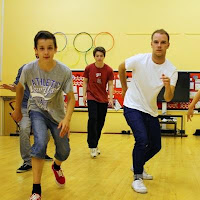 Strong support from Ryan Hughes as Riff and Aynsley Minty, Nick White and Steve Scammell as the grownups, but the night belonged to the youngsters. There was a ban on cameras but I do hope someone managed to video the lads' unforgettable Officer Krupke routine with Ben Hardy-Phillips as Action leapfrogging his gang across the stage and 'Baby John' Dillon Berry's incredible trilling social-worker pastiche ~ posted on Youtube it would get about a zillion views.  Creative Team Leader Claudia Berry must be very happy ~ and brochures are out now so you don't miss out on the next big Merlin production, Little Mermaid. 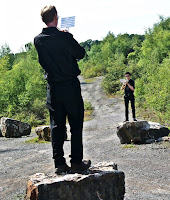 There's art stirring in wild places too, with the Step in Stone project in the disused rock quarries of East Mendip.  Six different venues throughout the summer till 18th October are featuring site-specific artworks in various media, and on Sunday the Westdown/Asham Quarry featured a call-and-response trumpet duet by Frome composer Helen Ottaway, together with birdsong and shadow sounds from long-gone industrial processes. 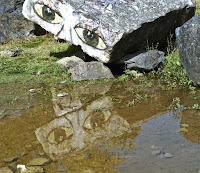 The art trail is intriguing but the whole place is enchanting now, reclaimed by trees and buddlia bushes and reedy marsh pools where dragonflies flit, reminding me of the temples of Cambodia reclaimed into jungle by determined Ficus Strangulosa trees.  The trail route is a walkers' right of way now, definitely a place to return and explore, when I'm home again in a few weeks. 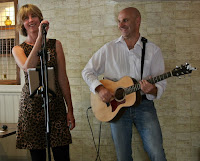 I'm off to California now, to walk the coast and write and spend time with good friends. As always, there's much over here I'll miss ~ Merlin's 40th birthday celebrations for one, and all the excellent live music around in pubs & bars ~ here's Chic Mystique at the Artisan this afternoon.

Also happening while I'm away is the Festival of Puppetry in Bristol which looks awesome, various stage shows, and the Great British Bakeoff (only joking) but I did at least get to see the extraordinary and brilliant Grayson Perry self-portrait in Bath's adventurous little Victoria Gallery. It's a map of his life, half-chronicle half-citadel and totally engrossing.

Posted by Crysse at 9:56 PM No comments: 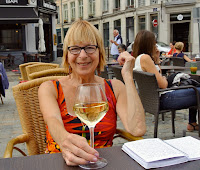 Travel to a new place is always thrilling, reminding me how soon the unknown becomes familiar. Some deep territorial instinct seems to claim the small details and promptly spin them into remembered knowledge while the bigger picture remains indifferently mysterious. That's how it felt last weekend in Lille.

Our room overlooked the railway and traffic in ‘Toutes Directions’ and massive new build, but the larger life of the city was far less interesting than our daily trips along 'our' route ~ the cycle track discovered on the first night ~ taking us directly into the old town of Flemish buildings painted ochre & russet with sloping triangular roofs and rococo cherubic & garlanded mouldings. 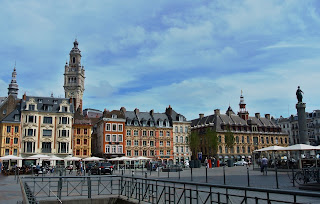 It’s easy to lose yourself here, as the tourist ‘city map’ apparently locates roads where there's room for the print rather than with reliable reference to location and has no truck with scale, but Lilleans are friendly, and speak English far better than my pigeon French.

And anyway Hazel and I were happily indifferent as we sat with our notebooks at a pavement bar, beside a fountain, by the river, on a bench in the park or a log in the Bois du Boulogne. This was a writing retreat, our ‘artist’s date’ with the kind of process writing we used to do when we performed  words together as Live & Lippy a decade ago.

Why a citybreak in Lille? Because this random location and impulsive decision had a quirky energy we hoped would re-ignite a shared creativity that has, inevitably, lapsed since Hazel left Frome to live further and further north, now among the Cumbrian hills. So this post is not a travel guide to a city in Northern France, just a few personal glimpses: our notebooks filled daily without attempting much objective analysis. We observed life around us, flaneur-style, at the Palais des Beaux Arts, at the Veille Bourse on Argentinian tango night, at the student bar in the old horse market, the pop-up cafe in front of the cathedral on Sunday, along the river where paddleboarders glided by like swans, beside crumbling walls of the old citadel, at the open-air zoo in the park... For me this trip was about staying offline & offscreen for three days, using a notebook & pen, and connecting more intensely with a physical world. And having a really nice time too.

Posted by Crysse at 2:34 PM No comments:

Email ThisBlogThis!Share to TwitterShare to FacebookShare to Pinterest
Labels: Lille

art and nature in Bruton 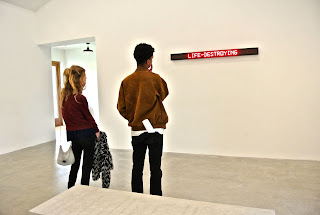 Hauser and Wirth in Bruton is a great place to visit, I discovered this week: not only beautiful barns filled with extraordinary art, but the most amazing gardens stretching seemingly into the far hills of Somerset, with massive clumps of pink, purple, blue and bronze flowers humming with bees and swifts darting across the pool. It's a short train trip from Frome, with a footpath stroll through fields and allotments from close to the station. The reward, as well as this luschious vista, is a one-woman show from Jenny Holzer: Softer Targets  features a series of dark aphorisms flowing in liquid light through differently coloured rooms, with coffin-like  sculptures carved with sinister phrases that could be the last words of someone unknown... there are bones too, tagged with messages that might be the last thoughts of the dying victim. It's sombre and challenging but too interesting to be depressing, and well worth a visit. Plus there's the Bruton Art Factory exhibition near the station, which is very jolly.

I'm heading off now with my writer-friend Hazel Stewart for a weekend in Lille, which has apparently reinvented itself as France's most underrated major city & an architectural feast (there's even an art gallery in a swimming pool). Lonely Planet is enthusiastic: "this once-grimy industrial metropolis has shrugged off its grey image and transformed itself into a glittering and self-confident cultural and commercial hub. Highlights include an attractive old town with a strong Flemish accent, three renowned art museums, stylish shopping, some excellent dining options and a cutting-edge, student-driven nightlife scene."  Expect a glittering and cutting-edge report later.
Posted by Crysse at 9:58 PM No comments:

"In August most of Europe goes on holiday" 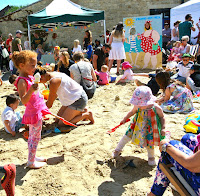 In Frome however, summer holidays come to us, with a beach party throughout Sunday's Independent Market. 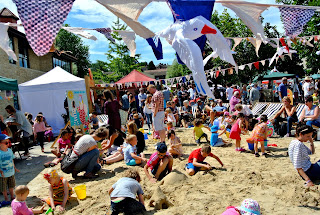 Sand, seagulls, seaside disco and superbly steady sunshine supplemented by seaside disco to create this blissful idyll in the market yard, with retro photo-booth, donkey rides and ice-pops (I chose Pina Colada, but no-added-sugar, so that's ok.) With all the usual artisan food, art & craft, and clothing stalls, extensive flea market, and busking stage including a great set from Leander Morales, this street market unfolded into a perfect English holiday. 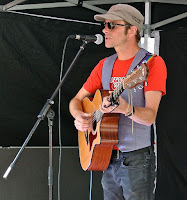 Writers don't stop for the sun, of course: Words at the Black Swan monthly workshop was led in the afternoon by Bath poet Sue Boyle who led us into the magic of mysterious glimpses in poetic postcards, 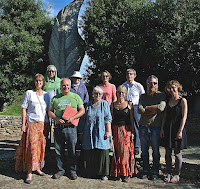 and then a swift scamper up to the Merlin amphitheatre to join the 'Flash Fiction' picnic. Organised by Frome Writers Collective, this was a great little showcase of the group's varied talents: the challenge was a 500-word story starting There's that sound again, & I loved the winning story by Alison Murdoch, a witty sci-fi take on trying to live in a human body when you've never heard of hiccups... 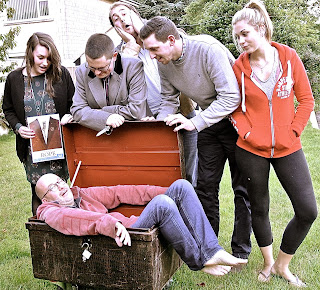 Meanwhile, Frome's new theatre company Shot In The Dark is heading for Edinburgh with a fair wind blowing from a big plug in The Scotsman for their suspense thriller Rope. It's a psychological study of a Dostoevskian motiveless murder, and writer Geoff Hunt who also directs, has studied several real-life cases to create a site-specific scenario for the streets of Edinburgh. If you're heading for the fringe festival, this is a production to look out for. A line-run before the trip gave me an opportunity to hear the script and take some typical, and non-typical, pictures of the show. Guess which this one is...

Looking ahead even further, Nevertheless fringe theatre company is making big plans for the future and for our next production, so I'll end this post with me and Rosie plotting... at Castello, if you're wondering where in Frome is good for planning your own next artistic endeavour. Other venues also available....