March 2011. The Independent publishes a picture of a vandalised water-tank beside the Pacific highway near Los Angeles and investigates why this sparked furore and may - or may not - have made a man homeless. Removal of the now-notorious "Banksy Elephant" for sale as valuable art delighted locals: "I've been trying to get that piece of junk removed for years," a council member told the newspaper, "in fact, I'm now a big fan of Banksy's work." The resident of the tank, a vagrant called Tachowa Covington, was a self-crowned king who scavenged for art to decorate his interior until, ironically, the exterior became art-with-a-message: in this case, the 'elephant in the room' of homelessness.

It's a story to fascinate any writer, and Bristol playwright Tom Wainwright chose to tell it as a monologue, renaming the tank's ex-resident Titus Carpenter and making him privy to his role onstage at the Brewery, as well as filming his own story-telling. In The Room in the Elephant, Titus is an unreliable narrator who resents 'Mr Wainwright', and metatheatrical complexities though thought-provoking were almost overwhelming, but Gary Beadle's performance was totally gripping. Oh, and there's a pie & a pint with every ticket-holder ~ an excellent way to spend an autumn Saturday afternoon. 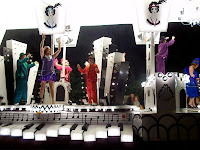 By evening we're back in Frome in time for Carnival, a seasonal celebration untouched by the pursed lips of PCness and seeming barely changed in spirit since Thomas Hardy's days. There were nods to the world as we know it, of course: majorettes following the tractors flourished tinsel pompoms and there were lumberjacks and vampires as well as Young Farmers. Here's "Hot Rock ~ The Twenties", which won a cup and a shield too, for best costumes.

Homecomings... always some big change, isn't there, this time not just a 15° drop in temperature but the end of a radio era... I thought I might mourn, but tbh Moyles in the Morning was getting a bit of a yawn, so welcome Nic Grimshaw, I'm enjoying waking up with you. 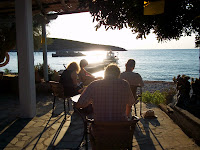 A visual glimpse to end this posting as my mental images of glittering sunlight on seas recede leaving me nostalgic for the sands of Twenty-minute Beach and the pebbles of Silverfish Bay, and most of all those dusk writing sessions at Maria's Taverna as the tomato-red sun lowered over sea framed by scented pines...
Sto Kalo, all of you, wherever you are.

Posted by Crysse at 8:00 AM No comments:

Email ThisBlogThis!Share to TwitterShare to FacebookShare to Pinterest
Labels: Carnival, Skyros, The Room in the Elephant

Update from Athens, poised half-way in journey time between end-of-summer on the island of Skyros, half sultry, half stormy, and a staid English autumn. 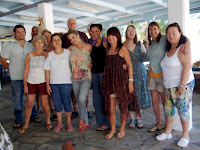 The 'Writers Lab', as the brochure calls our loose impulsive gatherings at Maria's taverna by the shore, has been a challenge and a delight. The challenge, which was purely logistical ~ 16 writers is about twice my usual number ~ created the solution: we met twice a day, in the morning with frappés as the fishermen mended their nets (this is not the simple darning I'd always imagined, by the way, it involves slicing floats out of old nets and threading them into the new ones) and then again as the sky paled and the sun dropped below a fringe of pine into a sapphire sea. 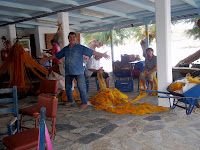 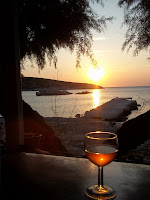 Nets are sunflower yellow, floats are terracotta red, and local wine is pink... To confirm what may be already evident, this was an amazing session for venue, sunshine, and participants combining enthusiasm, goodwill, and talent. I'd love to list & praise everyone but this isn't the place so I'll just say: Go forth and prosper ~ I know you will. 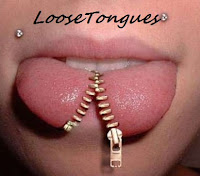 "Frome's premiere pub theatre team will be bringing lively new drama to the town when Loose Tongues start wagging at The Cornerhouse" promises This is Somerset, anticipating "a powerful play produced by Nevertheless Productions, run by Rosie Finnegan and Crysse Morrison, in association with Inkling Productions, on Thursday, September 27 and Friday September 28 at 8pm." There's more, so do check out the link and don't be deterred by the accompanying picture in which I look like a deranged nonagenarian and Rosie looks like my carer.

And I'm also looking forward bigtime to Theatre West autumn season of plays with Bristol settings, starting next week at the Alma Tavern Theatre: Steve's play Sleep Lane promises to be a cracking opening to the A-Z theme, and I'm thrilled that my shortie Park & Ride is to be curtain-raiser for the following production, David Lane's Rush.
Posted by Crysse at 2:00 PM No comments: 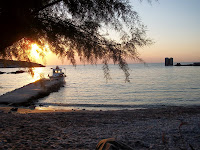 If you've ever had a wild urge to write on a Greek island, here's just one reason to indulge it... Skyros island is one of my favourite places in the world. For the last week I've had the privilege of working with sixteen diverse and genuinely talented wordsmiths, and here's our base. It's an intensive course so we all really need a day off in town today and a chance to reconnect with what we laughingly call the real world ~ a bar by the plateia with funky remixes, wine, and wifi!
Kale'nikta...
Posted by Crysse at 7:38 PM No comments:

Email ThisBlogThis!Share to TwitterShare to FacebookShare to Pinterest
Labels: Skyros

This has been a good week for intimate performances: on Tuesday I was at Bristol's Bierkeller for Panning for Gold, back from its 4-star run in Edinburgh. From a simple premise ~ three jilted brides meet in a therapy group for a series of sessions ~ writer Jasmine Smart has crafted a play of surprising diversity, devoid of cliché or sentimentality, and with deep emotional impact. The women's words are angry and painful but also witty, lyrical and inventive, and the actors (Anna Gillingham-Sutton, Charlee Lauren, and Jasmine herself, with Penny Lamport at the counsellor) all movingly credible. The slow reveal of each suicidal story continues to the final moments ~ no spoilers as hopefully Thrice Three Muses will tour this show further ~ but this is ultimately about human capacity to heal. As Auden says, we must love one another or die.

Bradford on Avon Fringe Festival began in 2010 "to give an opportunity to local talent... with events that reach beyond the familiar arts format, to surprise, startle and delight perhaps." The even-better news is that even though the actual festival promptly took a 2-year sabbatical, lusty toddler Fringe B.O.A has decided to become a stand-alone event. There's a range of events from bring-it-yourself BBQ in the park to burlesque night, and a lively cartoon-style programme - wish I could find a link to the brilliant artwork: punching stylishly beyond its weight is the phrase that springs to mind. I went with a Frome posse to be surprised startled and delighted perhaps by the double bill in the Cellar Bar at The Swan: Bootleg Theatre opened with Rosie Finnegan's 'poignant, gently funny' short play The Girl with Blue Hair in an excellent revival with the same cast (Sara Taylor and Joe Bossano) successfully adapted to suit the small performance space. A change of mood followed as Bath Drama group took on Shakespeare's mechanicals from Midsummer Nights Dream to give us the tragedy of Pyramus and Thisbe, both in rehearsal and final performance. 'Definitely an Arty Farty evening,' as the listing promised.

Thursday too was a night of intimate delight at Poetry Platter, a dramatic supper-party-on-stage concept unique to Frome's Merlin Theatre, as Chris Redmond and Patrick Jones shared their Private Passions. Chris, whose passions include food, foxes, family & most of all music, crafts his performance pieces with wonderful lyricism and rhythm. Patrick's experience of social outsiders & personal hardship gives his reading a more overtly political edge though he too introduced us to the family he loves. Two fabulous & very different poets, both able brilliantly to engage and entrance their audience, to mix moods between hilarity and profundity, and to consistently surprise ~ what else could we want? Well, nothing, and even the heckler ended up new-best-friends with Chris - you'd need to be there to get that one though. 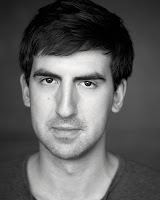 Finally on Friday, The Deep at the Brewery, a sea story 'based on a true event' ~ or maybe thousands such: a monologue account of the last hours of a fisherman drowning in the North Sea. Timeless simplicity and a rich poetic voice made for a powerful script, adapted from an Icelandic play by Graeme Maley, and Joshua Manning was superb as the 'big, braw' young sailor who finds himself living for real the Titanic disaster he's just narrated to entertain his shipmate. My only quibble was the unsubtle embellishments: lights popping on and off, violin soundtrack appearing and disappearing, and an unnecessary amount of pacing about. With an actor of this calibre and a story this moving, less would definitely have been more.

Final footnote for a busy week: a thought from poet and dramatist Edna St Vincent Millay:
My candle burns at both ends,
It will not last the night.
But ah, my foes, and oh, my friends
It gives a lovely light.
And after quite a bit of candle-burning recently, I'm poised now for a change of pace for a while on idyllic Skyros island. I'll think of you all as I watch the sunset... 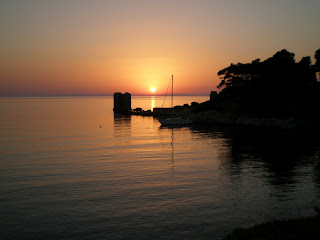 Posted by Crysse at 3:30 PM No comments: 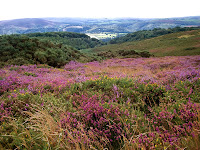 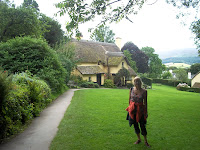 September began with 3 days walking in Exmoor along moorland tracks and coastal paths probably little changed since Coleridge escorted Dorothy Wordsworth across these hills and she wrote in her diary of the 'furze gay with blossom' and 'songs of lark and redbreast' and mists over the sea. Late summer sunshine and an excellent base (White Horse Inn in Exford) enhanced a blissful break, and I was back in time for Blahblahblah at Bristol Old Vic, the 'relaunch' (when did it run aground?) of their monthly performance poetry event Word of Mouth. Luckily the makeover didn't change Byron Vincent, still self-deprecatingly endearing & the most absurdly funny MC around. The main difference apart from free wine and sweeties was the extensive line-up of guests ~ a dozen, in fact. Most performers were splendid, some were superb. I especially liked Harry Baker's witty mathematical twist on freshers week, James Bunting's fantastic love poem to Bristol, Anna Freeman's powerful personal poem My Right Hand, and everything Chris Redmond does. 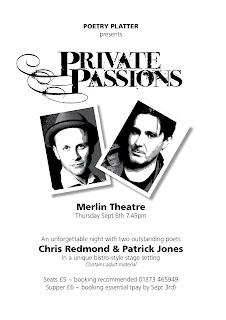 Which is really good because on Thursday he's coming to Frome's Merlin Theatre, to do some more!

Posted by Crysse at 2:00 PM No comments: