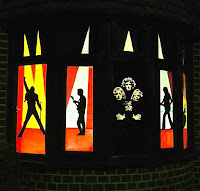 On a freezing weekend evening the town's streets in every direction saw friends and families all out and about appreciating Window Wanderland as Frome joined this international project and around two hundred homes and businesses transformed their windows into illuminated showcases for every kind of imaginative tableaux up to & including complex fairytales like Rapunzel - even the Town Hall joined in. Big appreciation to all who took part, and to Lisa Glass for bringing this illuminating & wanderful idea to Frome.

Poetry - another Word Play recording at Visual Radio Arts for your delectation: four poets shared words and chat live on air on Saturday afternoon. Dawn Gorman, Josephine Corcoran, Jennie Gilling and Louise Green can be enjoyed on the archive link here - many thanks to Phil and Mags for their awesome commitment to supporting creativity. And I should also give a quick plug to an Open Mic at Three Swans next Saturday, organised by Edventure.

Music corner: I couldn't resist a break from writing to see the marvellous country-rock band Shootin the Crow at the Grain bar on Wednesday, and Sunday's jazz at the Cornerhouse when the John Law Trio played melodies as arranged by Bill Evans - both really special events, the kind that get people saying, isn't it amazing you can walk around Frome and hear stuff like this every week, for free? (well, there is a hat, but nevertheless!) 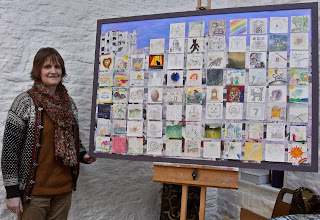 Art now, and an art & craft exhibition at Silk Mill all weekend in support of refugees with funds going via RAISE - I loved the big compilation picture created by visitors and stall holders contributing their image of 'home' - some fabulous evocations of family and safety, all a big contrast to the camp at Calais
and a new opening at Black Swan: Here's Kate Cochrane, one of the organisers, with the result - framed free by Mount - which will be auctioned.

And another art display opened at Black Swan on Friday with the spring exhibition of Frome Art Society, as always a huge range of styles and subjects depicted by talented local visual artists. As always also, on the Monday following an opening Words at the Black Swan offered a poetry workshop inspired by the art in the gallery. Dawn Gorman who led this session invited the group to respond to the overall vibrance of the works with a focus on colour, reading Choosing Yellow as further stimulus just as Liam bizarrely arrived with a random yellow rose. One of Frome's little moments... and another inspiring session.

Now, through snow flurries, whirling but light, to Bristol, to see the first Shakespeare at the city's Southville theatre since Andrew Hilton retired from Shakespeare at the Tobacco Factory, the separate company he founded in 1999 to bring a double drama season to that in-the-round theatre space. His directorial approach was strong but subtle: Lyn Gardner summed it up: "Hilton .... is a plain cook, whose unadorned approach – no concept, the barest stage possible, music used sparingly – pays dividends," and, in another critic's words, "It is tiresome a small, unsubsidised company in the suburbs of Bristol beat the great RSC, but one lesson ....is that it is time to return to basics." Some of the best bard productions I've seen have been there, often with local actors in lead roles. 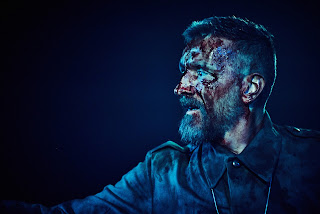 Perhaps I'm grieving the end of an era, or maybe this Macbeth came too soon after the stunning wordless performance by Mark Bruce Dance Company, but this Blood Means Blood version, without Hilton's sure hand restraining over-embellishments of symbolism and sound, didn't do it for me. Awareness of audience seemed an unresolved issue, with actors circling throughout their speeches, and some casting seemed designed to baffle anyone unfamiliar with the play (the women dressed like Miss Marple's maids for soldiers, priests, and the drunken porter). And who'd have thought the old play to have so much blood in it?  Everyone seemed to be puddling their hands in blood and pawing the next person they saw.  Katy Stephens as Lady Macbeth though was extraordinarily impressive. Perhaps you should go & decide for yourselves what to make of it - on at Tobacco Factory till 7 April.
Posted by Crysse at 1:09 PM No comments:

Words, weaving, and a quick dip into history

Another post with one eye on my project... a parkour ride round Frome past and present, and with time-pressure still set firmly on Silly - that's above High but just below Manic - what's had to give is again music: sadly I heard neither foot-stomping blue-grass Old Boston Tea Party at Grain Bar, nor Don Kipper's Balkan Beats at 23 Bath St. I couldn't resist Emma Harris' scratch band at The Cornerhouse party though, with- great music, great dancing. 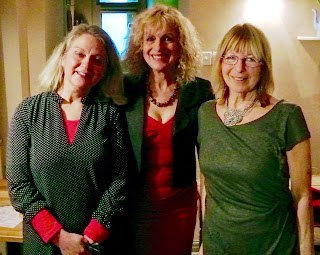 And I did get to hear some terrific poetry, at a crammed Frome Poetry Cafe with a February theme ~ 💖love, naturally ~ twenty poets from the floor and a great atmosphere, with guests Josephine Corcoran and Rosie Jackson both much enjoyed. I haven't heard Josephine before, and really enjoyed her memories of people and places, especially Winter in Trowbridge, the town of three smells: beer, meat pies, and sewage. This and other great poems in her new collection The Misplaced House. 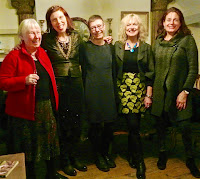 Another evening of poetry too as eco-poet Helen Moore paid a flying visit back to Frome to launch two new books: Intatto/Intact, an innovative Italian/English collection (The Italian poems beautifully read by Annie Lionnet) and The Disinherited, her sad & angry poems about British treatment of the natives and the transportees in Australia. Again a full audience and a great atmosphere, as Helen's readings were further enhanced by readings from two Frome poets ~ Rosie Jackson and B Anne Adriaens ~ and a story-telling by Bard of Bath Kirsten Bolwig. 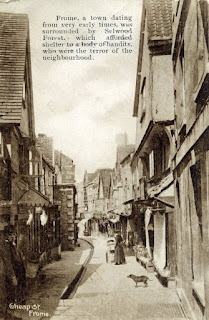 Most of my time though is still absorbed in interviewing, transcribing, and struggling to wrestle big balloons of information into a shape that, if not logical, is at least coherent.  I've learned an unbelievable amount, not just about the past & present of Frome but unexpected things like the tragic life of the queen bee and the lexicon of graffiti.  I've met a neighbour who was filmed in her punk days, another who was played on John Peel, and many more fascinating people with amazing memories - in fact when this project is finished there's scope for so many spinoffs ~ I definitely want to do something about decorating the fabric of our town too.

So I'll end with a contrasting couple of images: an ancient postcard inscribed with what the publisher considered the sole fact of any interest: Frome, a town dating from very early times, was surrounded by Selwood Forest which afforded shelter to a body of bandits who were the terror of the neighbourhood  - and the newest bar in town, The Loft at 23 Bath Street, with decor by internationally-renowned street artist Paris. 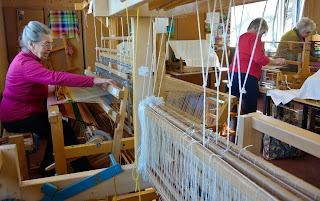 And also plea from the wonderful weavers of Frome, who I also met on my investigations, who urgently need a new home. Big enough for 7 floor looms 18 table looms and stacks of other paraphernalia I failed to comprehend, and a lot of yarn in wondrously diverse colours. In Frome or as near as possible. Anyone know anyone contact them on this link - as soon as you can!
Posted by Crysse at 2:39 PM No comments: 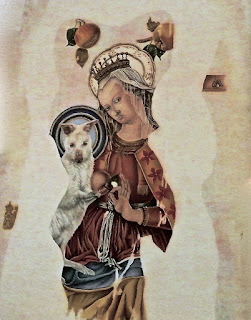 Renaissance Reimaginings is the enticing title of the new exhibition of paintings by Leslie Glenn Damhus at the Hubnub Gallery: 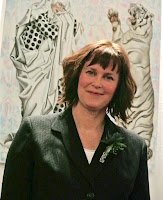 they are simply gorgeous, evoking archane medieval myths with a slight twitch of the lips, and they have enticing titles like 'Madonna with an albino wallaby' - definitely not one to be missed.

Hubnub's Rye Bakery also hosted this month's Town Council 'business breakfast' session which I decided to join despite the fact it started at 7am. 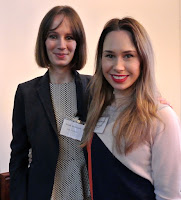 My pre-dawn sortie rewarded me with tortilla and some tips on twittering. I'd taken my laptop in case advice arrived as a series of tweets but actually it was mostly via old-school flip-chart, with a useful power-point summary from Sarah & Hannah of DNA Worldwide.

February so far has positively throbbed with live music, but I've only found time

for only the skimmiest of skim-throughs with a couple of brief pop-ins, though there's been several excellent jazz sessions at the Cornerhouse, Emma's soul at the Archangel, Invisible Eyes punk at the Griffin, 2+2=3 boogie night at From Perú to You, Celtic jamming and Grain Bar blues... here's just one image of Nasty Habits at The Sun to represent all this massive local talent, free in Frome.

I couldn't miss Bookends of Time at Frome Library, three fascinating talks about this area: the Selwood Forest story from always-engrossing  World Tree expert Julian Hight, plus a tale from pre-Roman days when this area was part of the Kingdom of Dumnonia (Flesh and Bones by Annette Burkett) and Carolyn Griffiths' Woad to This, the story of the local wool trade from glory days of dyeing to the dying days of closures. Woad was grown just outside the town and its indelible indigo hue used as the basis for every other colour - recipe books from the 1700s still exist and you can see photos online at Bath Central Library where they are held. This cloak showing various tones of the unblended dye was created by the knitting group at ~ appropriately ~ the Blue House. 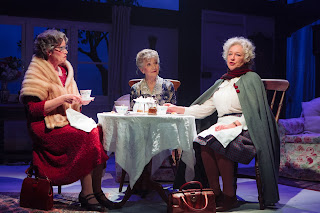 Moving now to Salisbury Playhouse where Murder, Margaret and Me pitches Agatha Christie, a writer who slaughtered her characters as casually as she sipped tea at Claridges, against Margaret Rutherford, an actress who obsessively made all her characters comical. Between these two flits the imaginary character of Jane Marple, claimed by both her creator and her performer, and nicer than both of them. Philip Meeks's play was originally a solo show, quite a challenge to convert a monologue to a three-person two-act drama when nothing actually happens apart from talking, much of it direct-to-audience exposition, and a little soft-toy playfulness. You'd need ideally a varied tonal range of voices, difficult when all three (Kate Brown, Sarah Parks and Tina Gray) are ladies of a certain age and similar cultural class. Maybe it’s one of those Samuel Johnson things.  Director Damian Cruden adds some clever touches, like the anonymous technicians who gradually build a set around the inaction, and the unwrapping and rewrapping of the hard furniture of these bleak lives. Costumes by Dawn Allsopp reflected personalities, idiosyncratic for the sparring duo, sweetly old-ladyish for Miss Marple who is perhaps the most satisfying character: she is frankly invented. Neither the real writer nor actress come across as women anyone would want to spend much time with, the one obsessed with prying and the other with puddings.  On till 24 February. 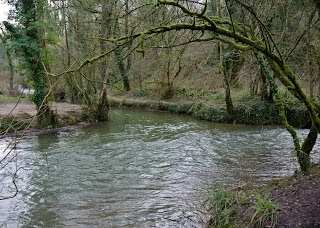 I'll end with a glimpse of Vallis Vale, where the river merges with Mells stream, where I walked as a break from interviewing and transcribing for my engrossing current project. Still one of the most beautiful places I know.
Posted by Crysse at 8:23 AM 2 comments: