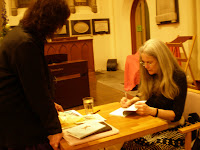 San Franciscan poet Sharon Olds has brought out a new collection, her ninth, entitled One Secret Thing, from which she read to a packed congregation in the Church of St Michael in Bath last Friday. She is renowned for refusing an invitation to dine at the White House because of her fury at American warmongering, and for writing about her bum as 'cellulite fruit and nuts... exhausted, tragic.' Her passion to chronicle the ordinary sensual stuff of life and to oppose national conflict are both abiding themes in her poetry. "I don't know why children aren't as good a subject as war" she says, commenting on content-based rejections from literary magazines. "There is a real need for poems," she says simply. "We, the citizens of the earth, need to write poems." 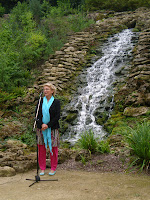 The Poetry Society thinks that too, and to celebrate its one hundredth birthday there's been a series of events around the country, including a Cascade of Words and Music at Prior Park on Sunday.

Warmly compered by organiser Nikki Bennett despite the chill, it was privilege to celebrate alongside wonderful voices like Rose Flint, David Johnson, Kevan Manwaring, and others - including my writer friend Hazel, back south for the weekend. 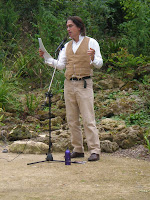 I'd like to end with a word for ITV's dramatisation of Wuthering Heights... two words actually: rain, and death.

Neither of them my favourite things, though I'd watch Andrew Lincoln in any weather. Lots of flashing eyes and floating hair, galloping horses and ghostly intruders, though actual narrative is terse as text. Apparently writer Peter Bowker deleted characters and invented scenes for this psychotic love story but is there any other way to bring a novel to television? 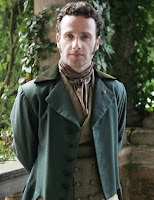 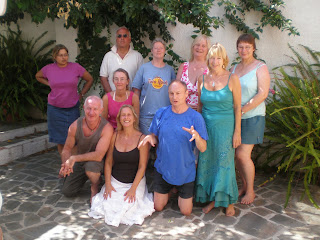 Sensational is the simplest way to describe my week at Cortijo Romero in Southern Spain leading the 'self expression through creative writing' group . A synaesthesia of senses, in fact: silken pool water, velvet hills, and rustling palms. 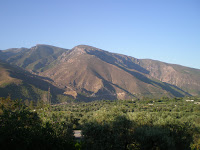 This area, in foothills of the Sierra Nevada, was tamed and irrigated by the Moors but given its tri-zonal climate by nature: flora is extraordinary and clear skies reveal breathtaking layers of stars. Our days quickly develop a delicious pattern: early morning yoga, then after a brief meeting the mornings are dedicated to word-work and word-play, with afternoons free to sunbathe around the pool. After supper, which like all meals is delicious & al fresco, there's optional activities like chanting, dancing, spanish song, or further immersion in conversation, or submersion in the pool... 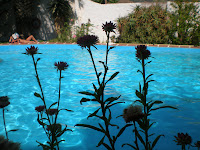 Here's my 'recipe for Cortijo Romero':
Take white walls and terracotta tiles, and meld into habitation, flattening the roof so it forms a terrace under the stars. Decorate the traditional way with archways, courtyards, and a cat. Soak in sunshine for a long time while the pool is prepared. This must be surrounded by palm trees and blossom – hibiscus is ideal. Turn out under a firm blue sky onto a setting with views of mountains and acres of ancient tranquillity. Fill your finished cortijo with people who love it, with good food, with learning and laughter. Glaze with delight and sprinkle lightly with the scent of jasmine. Your guests will come back for another helping again and again. 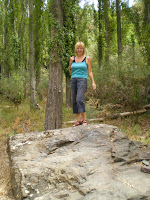 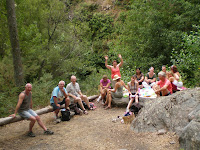 Personal highlights, in a week that was up there with the eagles of the Sierra Nevada, were the strenuous clamber upriver to swim under the ice-melt waterfall, and the gentler cascade of wonderful words from my very wonderful group in the last-night cabaret. 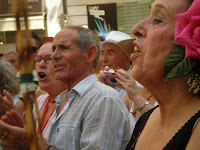 So I wasn't looking forward to ten hours in Malaga on the final day, but actually it was brilliant - thanks, Louise, my intrepid and ever-delighted companion, for an unforgettable day of exploration and fiesta, finding ourselves suddenly in the heart of a very Spanish celebration. A great way to leave and take home the musical vibrance of Andalucia. 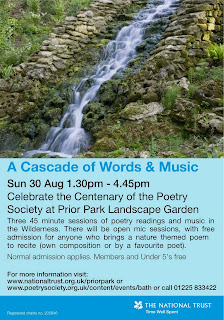 England was kind to my reluctant return, having the grace to offer sunshine today. I'm hoping it hangs around till next Sunday, for the 'Cascade of Words and Music' in Bath's Prior Park.
Posted by Crysse at 11:45 PM No comments:

Email ThisBlogThis!Share to TwitterShare to FacebookShare to Pinterest
Labels: cortijo romero, prior park

Not so much a blog entry, more of a twitter really: arriving in Spain to discover Cortijo Romero has extensive gardens with a pool and palm trees, ripe grapes around the archways, an elegant & cool study where the writing group will meet, fabulous food and steady sunshine, but no internet connection. So there will now be a short intermission.
Posted by Crysse at 7:14 PM No comments: 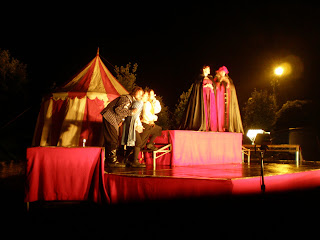 Around 150 people, some resolutely picnicking beneath umbrellas, sat stoically for nearly three hours through monsoon conditions in Frome’s Ecos Amphitheatre to watch Illyria recreate the heroic exploits of D’Artagnan and his Three Musketeers, a folies-de-Bergerac frolic of intrigue, amour, frenetic swordplay and improbable moustaches. Six actors and a flurry of costume changes combined to create a plethora of friends, foes, landlords, servants, nuns and horses. Sex was skimpy and the plot too complex for most of the young in the audience but nobody seemed to mind as fun was fast, and furious fighting frequent: with swords, knives, saucepans, fists, pistols, poison, axes, and a chicken, imaginatively choreographed and involving everyone - wicked Lady de Winter (Annie Lees Jones) was deservedly cheered for her courageous cat-fight to the death. The four men all acquitted themselves superbly, with William Finkenrath particularly striking as Duke of Buckingham who must be secret twin to Blackadder's Lord Flashheart.

Two shows in swift succession in Bath, and both find me paddling against the current of decided opinion: at the Ustinov there's the world premiere of Another Door Closed, a new play by Peter Gill. Applause was enthusiastic but it left me cold, literally, as air-conditioning was set on let-the-fuckers-freeze. Imagine an early draft of a Pinter play - before he decided that less is more effective to create the essence of relationships- cut into strips and restuck randomly, Dada-style, recited by two portly elderly ladies and that louche black-marketeer from Dad's Army.
I'll think up something else to say for publication, of course, but it won't be 'theatrical gem'.

Rik Mayall is unwell so press night for Balmoral at Bath Theatre Royal was cancelled, though we're allowed to view and review at our own expense - a cunning but unsuccessful plan to deter local reports that the play is now an unsalvageable flop. I thought the performance lost nothing from stand-in Steve McNeil's underplaying of the potential mania of his role, but I'm probably alone in that view. Michael Frayn's fantasy is based on the appealing conceit that the 1917 revolution was not in Russia but in England, resulting in redeployment of Balmoral as a writers' retreat. Not just any old writers, but Godfrey Winn, Hugh Walpole, Warwick Deeping and Enid Blyton - who is an erotic poet until the farcical and whisky-fuelled events of the play inspire her to create the Secret Seven and become a children's author. Lots of opportunities, among the silliness and corpses in the cabin trunk, for droll comments on literature, class, and cultural stereotypes - though you'd have to be as old as the Secret Seven are now to recognise most of the references. Apart from the drunk belligerent Scot, of course. He's not going anywhere. 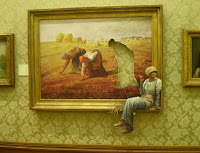 In the queue for the queue for Banksy on Sunday, buskers & an icecream van combined with brilliant sun and the cameraderie of the sidelined to create a carnival atmosphere. Cheers and party poppers as we secondary queuers reached the point of the hand-stamp which allowed us to join the legitimate queuers. We became entitled to privileges: the BANKSY versus BRISTOL MUSEUM flyer, giving precious little away about the location of tour highlights like the Easyjet version of the Flight to Egypt but providing a useful summary: A unique collaboration between the city's foremost cultural institution and one of the region's most overrated artists. 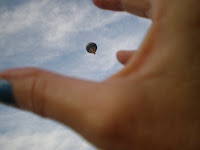 No lectures, no illegality, just delightful wordplay and wonderfully inventive images. Then back at the dockside for chilled wine, and at sunset watching scores of balloons float slowly across the city skyscape.
..
Posted by Crysse at 11:55 PM No comments: 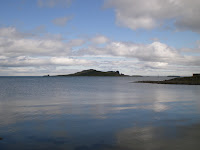 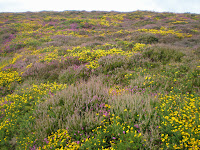 Unexpectedly at short notice, the chance of a weekend in Dublin, staying with my friend Jenny Sweeney, author of Encounter Ireland. Jenny and I were college flatmates, so catching up is easy as falling off a bicycle. She takes me walking on the heathery hills of Howth, teaches me the knack of the Irish Times crossword; we search for cowries beside the taffeta sea of Dublin Bay, and for late orchids in the dunes of Dollymount, and the decades melt away.

Stephen Brennan as Garry Essendine, the aging matinee idol, held the entire confection together compellingly, aided by Fiona Bell as his spiky secretary, and the laughter was indeed present. But the promised gel was missing in this series of tableau sequences, some of them voluptuous, some satiric, but never cohering enough for me to care by the end who went to bed with whom - or what happened to the hedonistic hero or anyone else in his ouroborotic coterie.
“All you ever do is pose in dressing-gowns,” Garry is challenged by Roland Maule (John Kavanagh, mangling the irony with buffoonery in this wasted role) “- you could be making people feel and think.” But why bother, when as the reviews all note: “The audience loved it!”

Frome writer Rosie Finnegan has heard from Bristol-based Writers' Block that her Sarah Siddons monologue has been accepted for production next Spring. Rosie says she was inspired by the '7 Ages of Shoes' monologue writing workshop and "You can quote me saying a big than you to you and Niamh!" which is jolly nice of her. She also says she's over the moon about it. So you should be, Rosie, it's a brilliant outcome for your first dramatic monologue.
..
Posted by Crysse at 3:00 PM No comments: