From azure & gold to mainly grey..

How dark and cluttered England alway seems after an absence: pale pleated sky hanging low over endlessly cluttered terrain on the drive home from Plymouth. In Spain masks are mandatory for all public places, and after a month with this sense of safety, the 14-day requirement to withdraw was actually a relief while readjusting to the on-off policy that England allows. But Frome is all about community so I've attempted a skim-catch-up on how the enterprising townsfolk have maintained their creativity... and of course, the answer is: impressively. 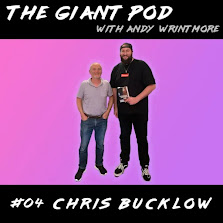 Words first: here's a link to Andy Wrintmore's Giant Pod  interview with Chris Bucklow, artist and art historian in which, as Andy says, 'We go down a rabbit hole of Chris’s complex and captivating theories about how his subconscious communicates with him via dreams, how we can learn to derive or interpret lessons about ourselves and get a better read on where our heads might be at.' Eleanor Talbot too has created several Variations on a Theme - interviews with a difference. Her recent themes were healing, hair, and 'sexy connections'.

Hunting Raven Bookshop is maintaining its reputation for innovative energy, with a socially-distanced book sale at the Silk Mill this weekend. with two more planned.
Frome Writers Collective is maintaining active support for an increasing membership, with a virtual writing workshop, story contest, and monthly meetings continuing on Zoom, with historian Peter Clark giving a talk on his new book, Churchill's Britain.

And - not from this patch, but poet Steve Pottinger is so well-liked in Frome that he's allowable - do check out Come to me now,, a reflection on nature and how life is always 'a moment you pluck between finger and thumb, a just-ripe moment... 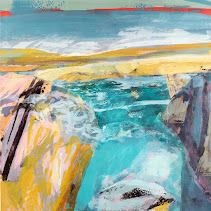 Obedient self-isolation similarly precludes any report on this weekend's exhibition of visual artworks made by people in Frome during lockdown, Creation from Isolation, curated by the Edventure students, but there's a virtual tour here. North Somerset Arts group took a different online approach, with members' work posted in their Virtual Art Exhibition throughout the weekend. Masses of high quality work, in a wide range of media - here's a painting by Gail Mason, from 'imaginary 'Emotional Landscapes,' places that I would like to be, and memories of how it feels to be in nature.' - because I miss these colours.
I narrowly missed the 6x6 exhibition at the WHY Gallery, selling cores of tiny masterpieces  donated in support of the charity counselling service that Jill Miller founded - particularly poignant in the month of the first anniversary of her death. 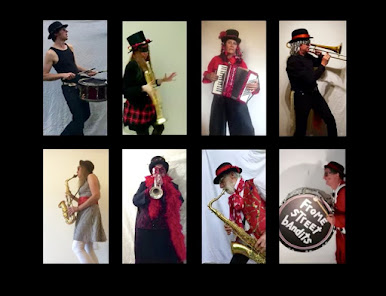 Frome's individual musicians have been prolific in their online posts on facebook, both on their own pages and on the public group Open Micsolate (with an impressive 6,600 members, none of whom seem any more keen to retrain than Fatima...) - here's Guru in a Camper Van from Paul Kirtley and Shoreline by Jane Langley and friends, both original works. And there's a new album out any minute now from Phil Cooper: here's Over My Head, one of the tracks on These Revelation Games. 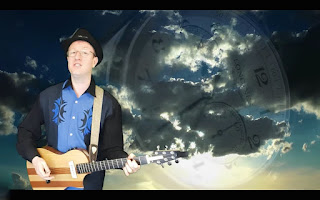 And now as autumn arrives although the world still feels nowhere near normal, there are reasons to be cheerful: my pre-ordered copy of Staying Human from Bloodaxe Books (edited by Neil Astley) has arrived and hedges are spurting with vivid, glamorous, reassuringly ordinary, bunches of berries.

This post is a little late, as wifi was variable during the final days of our trip - a week stolen on impulse, changing our booking and extending our travel eastwards: Vélez-Rubio, for an overnight Aire stop in this little riverside town between two sierras with a restaurant playing Wham, then on to Vilajoyosa where I'd stayed with Jill Miller, feminist writer and Frome's inspirational charity innovator, who made this lovely beach resort her home for several years before her death last October. 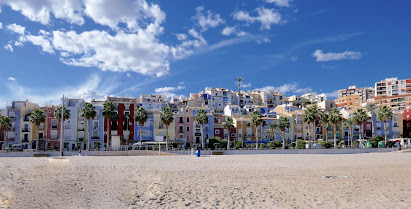 Time for more crags and castles then as we moved slowly westwards: Jalance, with a hermitage and superb historic mosaic fountains -Albarracin, where our cliff-top Aire gave stunning views across the double-walled hill, - Medinaceli with its massive Roman arch. 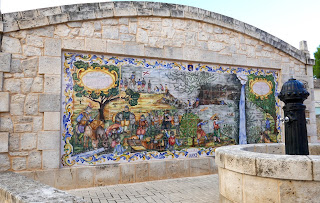 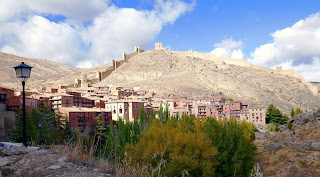 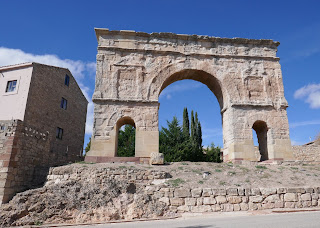 By now we're moving consciously towards Santander, via the Rioja region: a mellow Sunday night in Labastida and then Lierganes our final stop before Santander and the ferry home. 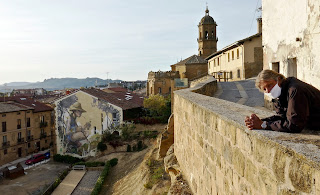 And after two and a half thousand miles of driving, stopping in quiet places with amazing buildings & fascinating histories, what's really seared on my mind is the space: the vast vivid sky, endlessly blue on most days - the massive sierras, the near-endless forests and rocks of our driving landscape - their subtle colour shifts through every tonal range: coppery-gold to russet, lime-green to forest, pale sapphire to cerulean...  England still feels strange: grey, and crowded. I guess I'll get used to it. 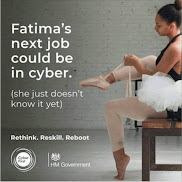 Even now we're back there won't be any Frome-related live reports till the requisite 14 days is up, but it's good to see 'the arts' are holding their own... Frome's talented visual animator Patrick Dunn has created a short video for Steve Pottinger's poem inspired by that crass advert urging creatives to de-skill from their years of training, inspiration & commitment, and sit over a keyboard instead. - you can see this animated version of Fatima here. Sadly, I missed Liv Torc's 'Rainbow Fish Speakeasy' zoom event with Elvis Mcgonagall, one of the excellent promotions from Wordplay, but it's good to know creatives are finding routes within the confines: live music & meetings, and online readings & workshops. Also lightening the final days of official summer for me: an enthusiastic review of The Price of Bread from the editor of Plays International which included the suggestion that this 'fast-moving story that has balanced narration and history, the private and the public, with sensitivity. Reading it non-stop I became convinced that it is a potential Booker Prize candidate.'

So there's always something nice about coming home, even when your fridge has died and everything's now in a puddle of water.

Posted by Crysse at 6:51 PM No comments:

still half a world away

A zigzag week, from Andalusian beach to a lake in the Sierra de Almijara to crags and castles, then back to the coast of Granada. Here's some images: lake Viñuela, en route to our three randomly chosen historlc towns in Cordoba province: Zuheros with its fantastic elevated castle,  Rute, which had surprisingly baroque street architecture and the region's Anis factory, and Priego de Cordoba, a busy town with a young population featuring not only an Islamic fortress and restored muslim nucleus of the town but also an elaborate 19th Century water feature which is also now a historic monument. 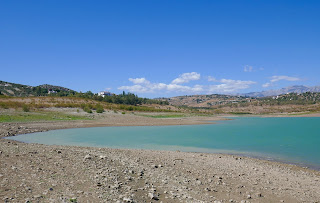 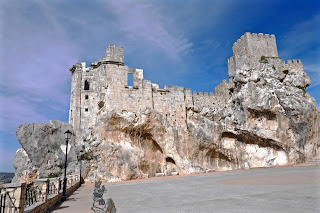 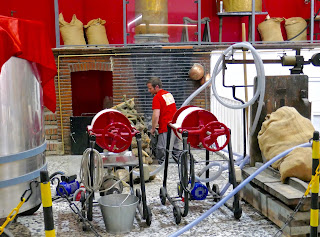 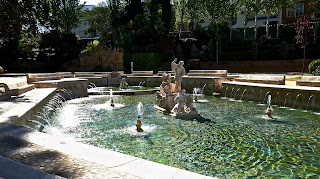 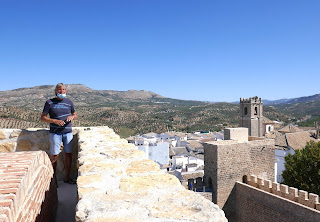 Southern Spain has a bloody history and our current campsite is in another brutally-conquered territory: poly-tunnel land, the shimmering plastic wastes that smother this coastal area. But it's a pleasant change to be on a site, after a week of  -massively enjoyable but isolated- Aires plus wild-camping on a car-park for trekkers on one of the Parques Natural. This is at Castillo de Banos, where we arrived today to find palm trees, sunshine, and a sea-line that apparently never recedes... 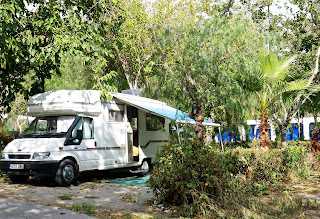 Wifi access has also given me the pleasure of listening to Eleanor Talbot's programme online on the theme of TRANSITIONS, which includes her interview with me about The Price of Bread at about 30 minutes in as well as Eleanor's thoughts and music choices. I read too that there has been much rain in Somerset. Here it's still sizzling hot with an unreal azure sky. For one more week ...
Posted by Crysse at 6:13 PM 1 comment:

Week 2 of the Spanish adventure 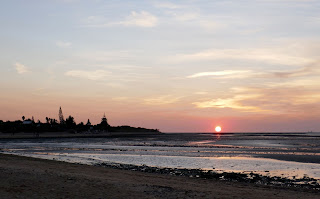 Sunset Cafe on the beach at Sanlucar lured us for a few days more, with next stop the limestone peaks of Sierra Bermeja, in the gorgeous biosphere reserve & bird sanctuary Casares (confusing for the map-reader as nowhere near our earlier stop in Cáseres) - where we watched eagles and griffin vultures circling the amazing rock peaks. 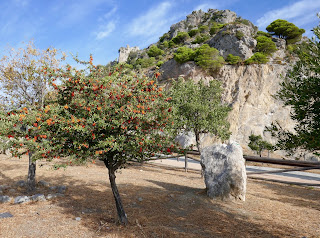 Then down the coast road to Torre del Mar, the ex-Moorish fishing village now a town with an extensive campsite where we stopped on our last visit. Parrots in palm trees, brilliant bougainvillea, paella in the beach bars... with our last week shuffling into view, we changed our tickets to extend our trip another week. Good luck with the rule/s of six, guys - here the sun shines & everyone wears masks - just bought a sequinned one, for evening... 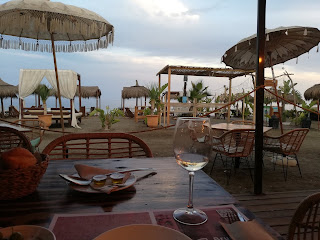 Posted by Crysse at 3:25 PM No comments: