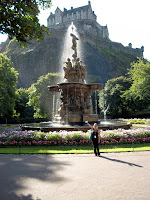 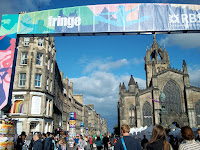 Edinburgh Festival! – the once-in-a-lifetime experience that happens every year, in the (modified) words of Tim Vine’s “Best joke of 2010”. I’ve always loved those best/worst lists so here’s Crysse's Fringe Pick&Mix, from the fraction of that fantastic array I managed in my five days: 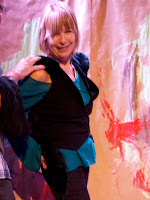 Best lupine encounter: the Shaman wolf who pulled me from the audience of Wolf to dance and kitted me out to join their chant to the new moon.
Best musical drama: The Screams of Kitty Genovese, searing ensemble piece based on the true story of a stabbing in New York in 1964.
Most intimate: Lip Service, a personal exploration of family by endearing and charismatic performer Becki Gerrard. 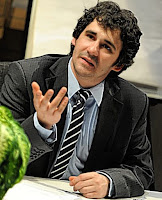 Best drama: witty, bittersweet My Romantic History by DC Jackson, taking the cliche of a troubled office romance into places of real poignancy as well as hilarity. Brilliant writing allowed the actors to create credible realities below the surface stereotypes. *****
Most unconvincing (yet welcomed) ending to a play: overhyped While You Lie by Sam Holcroft.
Best monologue and best female actor: charismatic Caroline Horton in You’re not like the other girls Chrissie, reincarnating her French grandmother, charming and feisty and undaunted in love by the German invasion of Paris. *****
Best impression of a duck: The City and Iris, delightfully childish physical theatre with an Amelie-style tale. Funniest Frankenstein remake and sexiest undead monster: Stitched Up.
Weirdest show: Harlekin.
Most wished I wasn't in the front row so we could sneak out: Bright the Ring of Words, proving anyone can bring anything to Edinburgh. 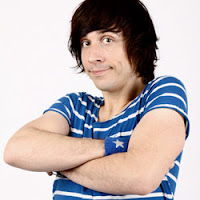 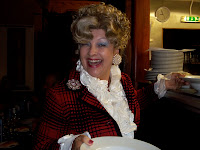 This loosely chronological list could have gone on and on - like best out-of-theatre performances: Ewan our spiritualist guide through the gothic vaults of Victorian Edinburgh, and Sybil from b'est restaurant. 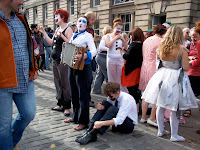 Mindblowing is the word used at the start of the telephone-directory-sized Fringe programme, but the common thread, despite all diversity, was connection by communication. From intense private intimacies to community struggles and transgressions, the theme of what it means to be human was palpable in all the productions I saw. 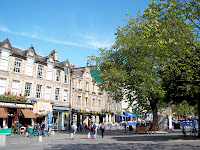 My main reason for the trip was to see new writing, as Traverse Theatre has a reputation for the developing and promoting the best around, but there was as much stimulation in the physical theatre, comedy, cabaret, and unexpected encounters - the whole city is such a seething hub of creative energy, from streets to skyline, that everything merges in one vast osmosic theatre experience, from the Morningside lady guide in St Cuthberts to the melodramatic moon above Princess Street.

Strongest image of the week? Flesh and Fowl's final curtain, when the walls come crashing down and animalism takes over - like the wolves on my first day. Oh, and Storm Large's survival anthem 8 miles. Check it out.


And finally, still on a dramatic note and equally exciting, for me: my play Consulting with Chekhov has been selected for the Theatre West autumn season as a rehearsed reading at the Alma Tavern on Saturday 18th September at 7pm.
..
Posted by Crysse at 3:00 PM No comments:

Reading fiction, even really enjoyable novels, tends to feel like work these days since I'm always on the lookout for something to comment on in my monthly column for Writing Magazine, which means I can't resist instinctively deconstructing and analysing.
So I turn to nonfiction, but even a short history of absolutely anything seems to be too long for the time available. Which is why I was delighted to discover SUM, a collection of whimsical essays so short you can read it from start to finish in the Easyjet check-in queue (I did) and so fascinating you can keep on rereading and reflecting on it endlessly.
David Eagleman's 'Tales from the afterlives' are 40 alternative possibilities of life after death, each one enchantingly absurd, with satiric humour so gentle and profound it takes a while to realise that none of these hypotheses are any sillier than the ones actually promoted on a daily basis across our planet. Essential reading, especially for any education secretary pondering compulsory religious assemblies.

A new production of Leaves of Glass by Philip "One-of-the-world's-greatest-living -playwrights" Ridley at the Alma Tavern is selling well, but it would be hard for any production to live up to the hyperbole of the programme notes. "A work of staggering poetry and fragile haunting beauty" it isn't, nor is the subject - paedophilic abuse - staggeringly original. The two male leads, brothers slowly (it's over 2 hours long) and unsuccessfully unpicking the damage of their early experiences, were well taken though the wife and mother didn't make much of their thin material. But the main deterrent to any real connection with their tragedy was the intrusive set which required bustling refurbishment of tables chairs settees and rugs after every cameo scene, of which there were many, thus shattering the cumulative emotional mood as effectively as the tiresomely numerous symbols of breakage in the script. The whole thing would probably have worked better as a 45 minute radio play.

Off to Edinburgh for a taste of the Fringe next week, tra-la, so next posting will be from there.
Posted by Crysse at 3:00 PM No comments:

Email ThisBlogThis!Share to TwitterShare to FacebookShare to Pinterest
Labels: Leaves of Glass, SUM

A splendidly sunny evening and a packed amphitheatre for Illyria's Pride and Prejudice at the Merlin's ECOS site. 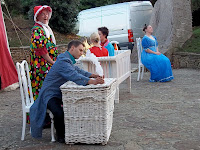 Weighing in at 3 hours, the production packed in every element of Jane's famous tale by means of a vast cast of frocks, coats, mob caps & top hats and military jackets, all bizarrely coloured like Boden meets Tim Burton’s Alice and splendidly animated by five fabulously choreographed actors to create the Bennett family and all their friends and relations, neighbours, servants and even coach horses. Wildly camp and hilariously funny, yet surprisingly skilful in creating sincerity for those moments when painful passions and perils broke through the romping comic capers. 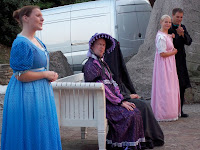 The cast were wonderful, especially Andrew Lindfield’s dashing Darcy who morphed in moments into a toadlike Mr Collins and flirty Wickham, Robert Took’s witty Mr Bennett plus outrageously outraged Lady Catherine, and Becky George for a medley of young ladies of which my favourite was Lydia, batty as Blackadder’s Queenie and just as imperious. Huge credit to Oliver Grey for adaptation and direction.

Soaps, I've often said, are the writer's friends. Not only do they familiarise our readers with devices like subtext in dialogue and inference rather than exposition, they are also indicators of public interest. Soaps show what's hot and what's not: in storyline terms, what's passé and what's now no longer taboo. Although not a regular attender - though I do catch up with the cobbles of Weatherfield from time to time - I was pleased to see my faith affirmed by the controller of BBC drama production in a justification of an allegedly anti-Christian soap storyline. 'Drama is by its very nature about transgression, and to neuter it would be to do the audience a disservice,' said John York, in the Radio Times - 'The complaints I most robustly defend are those along the lines of, Can you remove the wolf from the story of Little Red Riding Hood? Part of a story's job is to confront darkness and draw lessons from it and inevitably that will upset some people.' Absolutely. Plays should be stimulants not valium. And don't you love that word transgression... 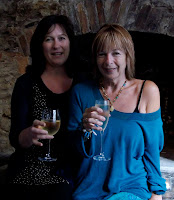 Despite session in the dentist on Friday 13th, I'll end on a note of celebration: With Rosie in the Archangel, after the readthrough of my play at the Alma Tavern with Theatre West producers and Radio 4 producer Sara Davies. Mega congratulations to ultimate winner Sharon Clark who gets the full production - me and the other two shortlisters will be included in the autumn season as a rehearsed reading in September. So despite 'just missing out' on the glittering prize, the final result feels like more gain than pain.
As Beckett says: Try again, try again, I die every night, every time... sorry no that's Keane lyrics... I blame the dental anaesthetic...
..
Posted by Crysse at 5:00 PM No comments:

Email ThisBlogThis!Share to TwitterShare to FacebookShare to Pinterest
Labels: Illyria, Pride and Prejudice 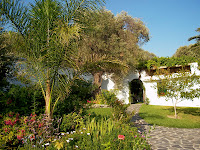 You know you're in a rather special place when the mission statement on the wall reminds guests:
• the 'deity' is in all of us.
• community is an essential expression of, and ground for, it.
• the total environment is also part of this whole and therefore sacred.
So when the taxi for Malaga airport arrived this morning I felt like I'd inadvertently munched Eve's sacred apple and been ejected from Eden. 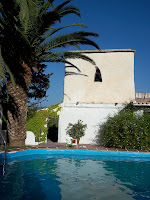 I've just spent a week at Cortijo Romero in the foothills of the Sierra Nevada, the perfect writing retreat: tranquil workrooms, exotic gardens, pool as blue as the Spanish summer sky, staff who offer not just help but friendship, all of us basking in what my friend Grace calls groundhog-sunshine days. 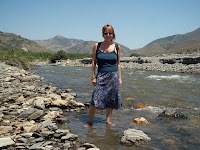 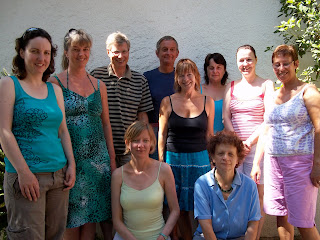 Slightly fulsome? Wait till I get started on my writing group - the Notable Nine, self-supportive, rapid-responsive, vastly varied, witty, wonderful wordsmiths - a simply unforgettable week.
Add to the recipe: fantastic food, river walks, night dancing, and you see why the long face when I left this morning... except that I took with me their card full of messages, far too personal and generous in praise for me to keep my promise to post on this blog, and though last night it made me cry, it will always make me smile now.

And smiling leads neatly to my Number One reason to be cheerful on re-entering rainy Bristol: an email from Theatre West to say my play Consulting with Chekhov is on their short-list of four under consideration for production in their autumn season.... the readthrough, and I presume the final verdict, will be on Monday. So I'm treading on eggs - or will be when I get my head around the fact there'll be no more of Eda's amazing suppers and I'd better do some shopping....
..
Posted by Crysse at 9:30 PM 2 comments: