"The reasons we write fiction are both simple and complex. Simple in that we are story-telling creatures who must shape our experience and share it with others; complex in that we are all individuals with different motives and desires." Derek Johns is an agent and a novelist too, so he straddles both camps in his article 'Why Write Novels?' in the current issue of the Society of Authors' Journal. 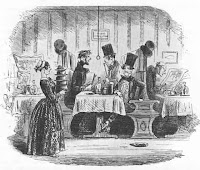 Possibly from beneath the brim of that first hat, he concludes: "The European novel was a function of 19th-century middle-class leisure time, just as chamber music was a function of chambers. Will it be superseded? We will always tell ourselves stories, but will those stories necessarily take the form of novels? And is the novel necessarily the highest, most evolved form of story-telling, as we have tended to think?"
Answers on a blog, email, poetry podium, or postcard, please.

"A misty Autumn day, smelling of empty benches... what will become of those memories of water and swans?" This was Saturday's Finale of 'Palace Intrusions' at Wells, as Artmusic threaded and wove together sunset and singing, candles and cellos - and awesome parkour free-running. A very different musical interlude from Acoustic Plus in Frome on Friday, featuring the 'Mendip Rock' of Cary Grace who's also my multi-talented web-designer. 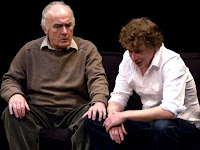 Monday was a dramatic night: "A Number" at Salisbury Playhouse only lasted an hour but crammed in everything anyone who’s ever been a parent, or a child, might have wondered or worried about. What is the value of a person, when we’ve got 30% the same genes as a lettuce… and does it even matter? Not being unique is hardly a death-penalty offence, is it? Carol Churchill’s play is rightly highly acclaimed, though the staccato faux-naturalistic interrupty dialogue is occasionally jarring, but the acting (Pip Donaghy & Fergus O'Donnell ) was stunning and the overall impact both moving and shocking.

And another dramatic impact that night was suffered by my car, deemed by the guy from the Crash Repair Centre about the worst damaged he's seen. Thank Daewoo for airbags - you only need them once but when you do, you do.

And now I'm off to Half Moon Bay in California to meet up with old friends in a new place - and to bring some southwest-UK stylee performance poetry to deepwest-USA. I'm billed to do a set in Caffe Lucca, Montara, which gets great reviews on Yelp. "Espresso pulled to perfection and foam that is wickedly thick and fluffy" says Jonathan C, giving 5 stars: "The patio overlooks the Pacific, but has a window to keep the chill of the coastal breeze at bay and minimizes the noise pollution on Cabrillo Highway."

Fellow reviewer Elizabeth H - is that really her on the surfboard? xtreme! - says it's her new favourite place. Mine too and I haven't even been there yet... Can't wait.
..
Posted by Crysse at 11:30 AM No comments: 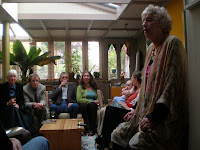 "Civilisation as we know it is well and truly past its sell-by date, and this is where this book comes in" says Bath writer Esme Ellis at the launch her novel 'This Strange and Precious Thing'. It's love, of course, and more - an exploration, among other things, of the possibility that fantasy is only another name for potential. 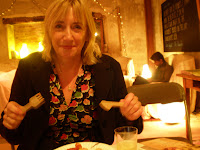 Small Wonder (Sept 18th-21st) is billed as one of the UK's most successful independent literary festivals. It certainly must be one of the smallest, being entirely contained in a barn just off the A27 a few miles from Lewes. Alison and I drove down to investigate, arriving at sunset on Friday to be met with cathedral quietness and exceedingly good soup.

The barn belongs to Charleston, where the Bloomsbury set allegedly met, so although the house and garden weren't open we could imagine Virginia and Leonard musing beside the cows, and EM Forster picking his way through the byre in his carpet slippers.
Our inquisitiveness was specifically focused on the Short Story Slam, to see if the idea might be worth nicking for Frome festival next year and luckily for our 8-hour round trip, it is. We'll adapt it, of course. We won't open the event with a narrative poem about the Mau Mau Uprising - always tricky to lift the mood to high joviality after graphic details of bloody atrocities.

We won't have the scores writ large on screen, so that the least successful slam readers have to sit staring at their low ranking along with the entire audience like some dreadful dream of schooldays trauma. We won't - oh, we've got lots of ideas, you'll have to wait and see. But thanks & respect to the writers and readers who created a highly entertaining evening, even though I couldn't honestly tick the "totally agree" box on the evaluation form for "Small Wonder is designed with young people in mind."

Our evening ended on a more lively note in Hanover, where Alison's friend Jonathan hosted us & introduced us to his bit of Brighton with "aspirations to bohemianism". Now if he'd given us an evaluation form, we could have ticked Accessible, Stimulating, Exhilarating, and Fun.... 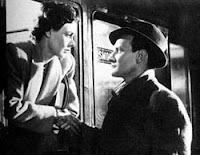 I'd never seen that "classic romantic drama” Brief Encounter so as it was on this Sunday afternoon I thought I Ought To. David Lean's iconic movie is more interesting as a study of a culture thankfully gone forever, where 'heppily merried' meant being hysterically emotionally repressed but with an invisible cook to make dinner. Romance I saw not: the love-struck couple sniggered and bitched like Karen and Jack from gay sitcom Will & Grace until guilt intervened to ruin their heppiness. Made in 1945 but clearly set pre-war (Noel Coward's script was written a decade earlier), there's appeal in the bravado of the voiceover technique, trusting us with the ending right from the start, but narrative viewpoint is sacrificed for an unnecessary scene in Stephen's flat. Brief? that was 86 minutes of rare British sunshine lost forever. But nothing lasts long, neither heppiness nor despair. And aren't we due an Indian summer?
..
Posted by Crysse at 9:00 PM No comments:

The Coleridge Way is signposted at judicious intervals with a quill, as fitting reminder of the inspirational nature of these 40ish miles across the Quantock Hills and Exmoor. The cunning marketing is certainly inspirational. It did strike me as a bit odd the poet had regularly paced this looping route to Porlock Information Centre; in fact he probably only did the bit between his house and Wordsworth's, and the rest are just some rather nice places he might have popped by. It's still a great walk, though we were mostly too knackered at the end of each day to write even with Dorothyesque minimalism. ('Walked, I know not where' is one of my favourite entries.) 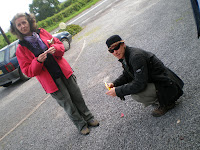 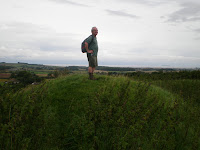 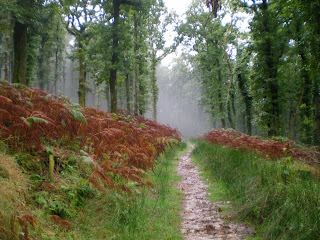 Well, anyway, we did it. Nine random writers followed the quill through varying weather and terrain, with some natural wastage, until on the fourth day the survivors arrived wreathed in proud smiles and gratuitous waterproofs to collect our certificate. 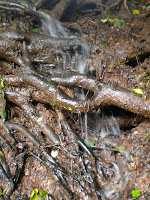 We'd travelled through Xanadu's sinuous rills in forests ancient as the hills, forded seething chasms; like the earth we'd breathed in short pants and if we didn't drink the milk of Paradise we certainly had some really good nosh at our B&Bs.

Back in time to catch some of the Bristol Poetry Festival at the Arnolfini, where the cafe isn't open due to building work.
Posted by Crysse at 11:53 AM No comments: 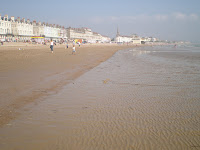 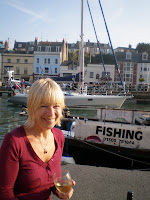 I had low hopes, as Emily and I picked the last Saturday in August for a writerly jaunt to Weymouth, of a proper day at the seaside with sun, swimming, and fish'nchips to finish the day.. but we did. We had an absolutely brilliant time. 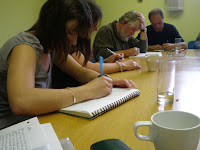 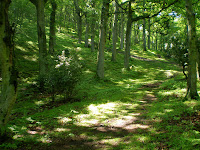 This weekend Hazel & I are off with the Dreamweavers team on the Coleridge trek, 39 miles across the Mendips and Exmoor. We're hoping to find inspiration for poetry of our own from treading in the footsteps of this perverse and talented radical, and find out more about the man too. It was Coleridge who defined literature with stunning simplicity:
"prose = words in their best order;
poetry = the best words in the best order".
His was the primary inspiration behind the Lyrical Ballads yet Wordsworth, perhaps out of jealousy, edited his contributions and undermined him constantly.

The relationship between Dorothy Wordsworth and her brother's poorer, more attractive, friend may never be known, but her journal carries a discreetly euphoric account of a long walk together late one night: 'Venus almost like another moon. Lost to us at Alfoxden long before she goes down the large white sea.'
(The picture is not Dorothy but literary writer Frances Wilson, whose biography explores dark secrets of this wild bohemian obsessed by poetry and passion.)

It's actually quite difficult to write simply on nature - even DH Lawrence was capable of sentimentalising, as when he said: "A small bird will drop frozen dead from a bough without ever having felt sorry for itself" (how did he know that? Was he fluent in twitter? That small bird might have been griping away like Darnell in the BB Diary Room). As a contrast to Wordsworth's notorious anthropomorphism (babbling cuckoos, pious robins, and a green linnet who sounds more like a Brownies camp leader), try Wing Beats, a collection of of words and images launched soon, with small observations like:
shifting currents . . .
a coot scrambles
to keep mid-river.