Always gratifying when people say 'Simply the best...' as they go, and satisfying too to see half a dozen of the audience sitting on the floor 'cos we ran out of chairs... "Madabout Words" in the Merlin foyer on Friday night was a fabulous smorgasbord of stories, poems, and songs.

Effusive thank-yous & virtual bouquets to Hazel, Howard, Niamh, Rosie, Alison and Willow, Gordon, Dave, Tracy, and Jill and Mick, for an evening that everyone – performers and audience alike – enjoyed so much. This was also the launch of the ‘Live and Lippy’ DVD, poems from Hazel & me with Howard’s amazing graphics, and I’ll post the Youtube link to the newest track as soon as I’ve got it. More pix at Haz's blog here.

Also this week: An 'Evening with Alan Bennett', billed as 'a great honour and a major occasion for the city of Bath'. Disappointing, even though I didn't expect much. A Forum-full of the city's burghers and a lion of the middlebrow establishment is a recipe for sychophantically cosy rather than stimulating. 'Literary musak' Peter put it, kindly. The readings were anecdotal to the point of trivia, embellished with name-dropping ("Prince Charles was in the audience, laughing loudly") and the sort of louche humour that works better at dinner-parties or on Scott Mills show. It's only that trademark flat fastidious voice that lets him get away with it, I thought, as the auditorium shook with yelps of mirth at the word 'scrotum'. Alan Bennett wrote brilliant observations of ordinary absurdity but this wembley-esque setting simply showed that Peter Kaye does it better. Perhaps authors need a self-help group to protect us from self-exposure beyond our skills. But when so many people are rattling their jewellery, or at least their books for signing, would any resist?

Did you know - and why should you? - that Pride & Prejudice is named as a favourite book in 18,000 blog profiles? I found that out by citing it myself in a retro moment. If the percentage of readers who also blog is quite small, that means around 250,000 people might also rate P&P as a favourite. And many more readers will have enjoyed it. In fact, using the curve-of-normalcy model, about 6 million. Not bad for an English spinster. 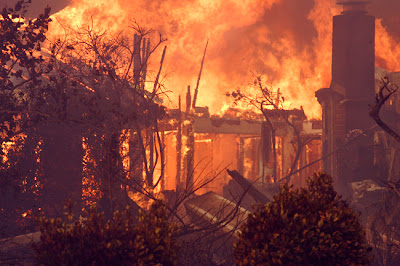 And finally... not a cute-cat tree-rescue but a photograph taken by a fireman in California and sent me by Mo. I thought it needed wider viewing.
..
Posted by Crysse at 4:09 PM No comments:

It's good to be back in Frome, where creativity oozes from every cranny, with musical art openings and an excellent writers circle meeting as some of the Madabout team limber up for next Friday's words cabaret.

So why do I rush off again, this time to the Cotswolds, to run a one-day story writing course in Farncombe Estate. Highly organised venues always scare me - maybe I'm allergic to delegate tags - but this is a truly gorgeous setting and, though 16 is twice my preferred group size, all the participants stayed focussed amazingly well and produced some great stuff.

Which brings me to this week's post. Occasionally when I catch a glance of my mission statement, up in the corner there with a picture of me last summer, I think it sounds a bit fulsome and gushy. And then I'm sent the finished product of a writerly experience I shared in a small way, and I know I am right to acknowledge these privileges. Step forward Laurence Shelley, if your blisters will let you, and take a bow. "Off the Wall Walking" is simply delightful; for its quirky humour and real humanity, for the candour and sheer excellence of its words.This is a book that doesn't need a journey of a thousand miles; it's written at the spritely pace of each single step, “living at the level of the sentence” as Tobias Wolfe puts it. No website yet, but orders taken at laurenceshelley@aol.com. 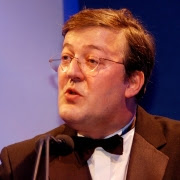 It's official: Top Wits are all men, and mainly dead too. My personal favourite Mr Wilde takes the gold in this national poll, with Stephen Fry in bronze position. I do like his objection to animal testing: “they get nervous and get all the answers wrong”.
And as I'm on to quotes, Emily came up with this great one from D.W. Winnicott over breakfast in her sunny garden:"My contribution is to ask for a paradox to be accepted, and tolerated, and respected, and for it not to be resolved." Should we crave closure in our lives? Keats saw human excellence in the negative capability of "being in uncertainties, mysteries, doubts without any irritable reaching after fact & reason."
And I'm ending this crop of quips with Eckhart: "An artist is not a special kind of person. Every person is a special kind of artist."
Especially in Frome.
Posted by Crysse at 11:46 PM No comments: 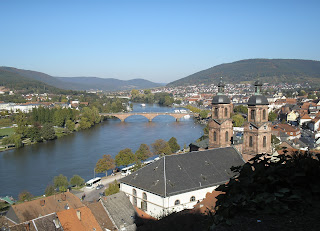 I've never been on a coach trip to Bavaria before, and as the day approached I did start to wonder if this might be one of those precious omissions best not remedied. "Ignorance of Großwallstadt is like a delicate exotic fruit: touch it and the bloom is gone," Oscar Wilde might have opined, and I'd have agreed.
But I'd have been wrong.

Thirty-eight members of the City of Bath male choir, plus a dozen of us WAGs and a driver with a penchant for appalling jokes, all survived the trip with remarkable good humour, despite a collision between two tankers on the German motorway adding another 7 hours to our lengthy confinement. And the bits in between - the walks and explorations, the hospitality, and above all the singing - were simply superb.
A lads' trip to a region renowned for beer-drinking was never going to be a scout cubs' picnic, but singing really was paramount: in castle vaults and town squares or beside the river at night, always with an energy which superceded mere collective excellence. 'Zestful' is a good word.

Stunning autumn sunshine helped too, and fascinating unexpected gems of local culture - an apple fair in Miltenberg, a falconry display at Cochem. 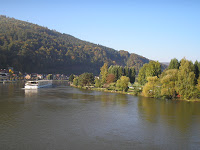 Our main stop was in Miltenberg, where the gaudy colours and pointy roofs make the old town look like a children's pop-up book and history, bizarrely, doesn't seem to exist beyond medieval times... don't anyone mention Fawlty Towers here. Despite this sense of important evasions and relentless monoculturalism, we're all made welcome at the concert in Großwallstadt which is the focus of this trip, and the evening ends with conviviality and dancing.
Best bit? The uncliquey cameraderie of the trip, and the enjoyment of meeting so many diverse personalities with one thing in common: the passion to sing their socks off. 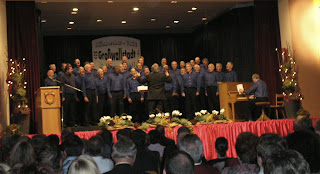 So maybe that's the secret of a successful Choir trip: take 3 score good-humoured men with zest, great voices, and lots of socks.

Heart-cockles-warming corner: arriving home to a message from Karen Mcleod whose debut novel "In Search of the Missing Eyelash" has been published by Cape with high praise and several translations. Karen is charming enough to attribute me with giving her 'good intelligent advice' during her first steps on the 'long, strange and sometimes arduous journey' that extended her opening line ("I woke up in a foreign armpit") and won her this year's Betty Trask award and - though Karen says it's taken a few months to sink in - the right to call herself an author. You go for it, girl.
..
Posted by Crysse at 10:38 PM No comments: 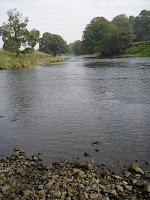 Just back from a long weekend in the wilds of Lancashire walking with my friend Anya in the Ribble valley with no real writerly news, unless you count winning a bottle of fizz at a charity raffle from Fizz off Coronation Street. We - Anya and me that is, not Corrie's Fizz - also went to see romany clairvoyant Omar about whom I can only say: if you're more comfortable with scepticism don't go anywhere near him as he'll seriously rattle your cage.

Off next to Großwallstadt in Bavaria on a charabanc trip with the Bath Male Voice Choir, so there will now be a short intermission.
Posted by Crysse at 5:02 PM No comments: 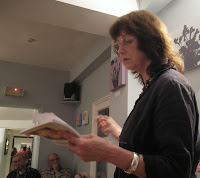 Omitting to celebrate National Poetry Day is against the poetic Hippocratic oath of Frome, so Monday saw the Library Writers' Group musing and poesying on this year's theme of dreams. Some great pieces emerged, several of which were read in the evening at a small but very pleasant event with a dozen poets - Rose Flint among them - presenting their words at the Poetry Dream Cafe. I especially enjoyed the interval poem created by the entire audience from songs with the word 'dream' in. We got 26 - 'Nights in white satin' and 'The night has a thousand eyes' allowed, but 'Yellow is the colour of my true love's hair' a tad too far-flung.

I've been immersed in reflections on family relationships recently, partly in response to the C4 programme 'Bringing Up Baby' which takes viewers to the fortress of horrors which is the Truby King rearing method of child-rearing. TK was a (male) vet who noticed that calves removed from their mothers gave up wanting or expecting any contact, essentially. Special features of his method are fresh air (all day alone in the garden) solitude (all night alone in a separate room) and no cuddles or eye contact. Claire Verity, the (childless) expert, scoffs at the idea of holding a baby close. 'You're not a kangaroo' she points out acidly.

My fascination is not academic: I was 'a Truby King' baby according to my mother, proud of her potty-training. 'Babies who feel abandoned can't learn to trust relationships' is the point arising repeatedly in studio discussions. I'm reminded of all this listening to Colin Firth talking about his new film 'Voyage round my father'. "With every good story, wherever it's set, you feel it's your story." His childhood, he says, left him feeling an outsider, but he's never regretted it - "you see everything with two pairs of eyes" - as the first requisite to be an actor is being confused and seeking attention. Maybe that's true of all creativity. It's a better route than deploring the unalterable past, anyway. I was going to post a pic of sour-faced Ms Verity here but decided Mr Firth in his classic wet-shirt moment is more attractive. 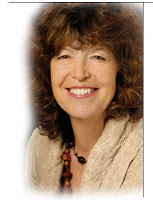 The monthly Fromesebury Group met this week: Debs has delivered her Ultimate Help Manual for supply teachers, and Debby Holt's new book 'The Trouble With Marriage' - "another astute study in relationships" predicts The Bookseller - is out early next year. "There's nothing like humour to encourage a proper perspective" says Debby in her article on why she writes romantic comedies. 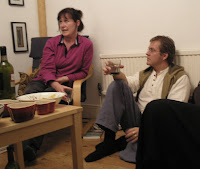 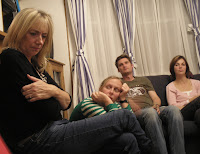 Another good-humoured meeting: Words @ Frome Festival convened for snacks, drinks, and consideration of the matter in hand: viz What the bloody 'ell's going on? as Rosie as chair succinctly put it. No-one knows. Festival founder Martin Bax has resigned, and the future of Frome Festival without an artistic director hangs in the balance. With 5 new members on the literary team we decide to continue whatever the outcome, and ideas for 2008 events come flooding in - a mix of old favourites and new ideas. Can we fix it? Yes we can!