Skyros equinox.
Cast off old ties that bound me
I will live anew. 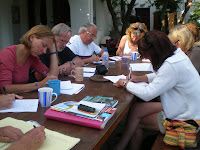 Last week's 'Writers' Lab' group produced fantastic prose and poetry, covering the full range from moving to hilarious, culminating in a fabulous evening of personal readings on their penultimate night. (Thanks, Beth, for the haiku.) And thank you all for the immense pleasure of watching nine fascinatingly diverse personalities, all strongly individual, combine with mutual respect and good humour.
My Skyros session is right at the end of the season this year, and I've found some things unfamiliar though some things unchanged: 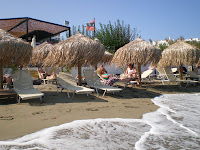 Juicy Bar still plays seventies songs while we spread ourselves in the afternoon sun and Aegean waves gasp their huge yoga-breaths along a beach of soft sand the colour of thick honey. Bougainvillea and jasmine still garnish whitewashed alleyways, feral cats still pause to pose. Old ladies in black, apparently all cloned from the same ubiquitous postcards, still greet us with Yasous as we clamber the cobbled paths that cats-cradle the huge rock of Skyros. 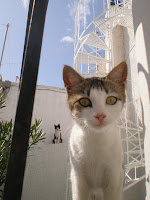 And it's still summer here, though the locals predict winds of change. Watching the sun rise beyond Brooke Square and set below Atsitsa bay, it's still easy to feel that perhaps this is all you know, and all you need to know... 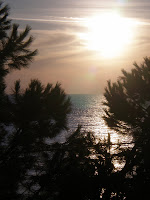 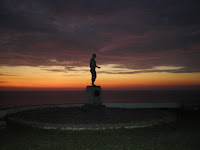 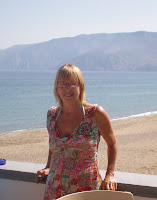 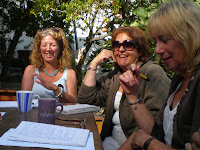 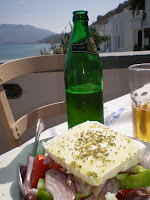 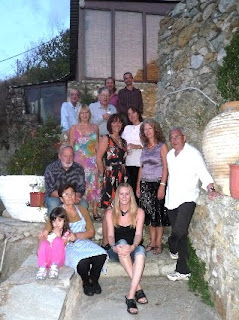 Posted by Crysse at 5:27 PM No comments: 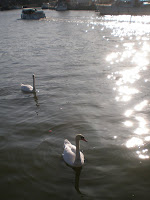 I'd have gone to more Poetry Can Festival events - I intended to, as line-ups looked great - but stuff kept getting in the way: theatre shows, Play-Me-I'm-Yours pianos in random places, or simply sunshine on the docks... here on Arnolfini corner, the usual backdrop of colourful graffiti, boats, tourists & locals, below me the big, soft, chrome-coloured, sundribbled spread of Bristol's river with its flotsam of swans & debris and a stream of silver sunstars strobing the water like firework fallout. Drums from the Organic Food Fest on the far side, chora playing behind me. Seagulls circling. 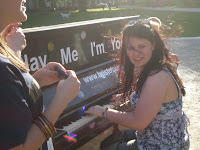 But I made it to Muscle at Bristol Old Vic on Saturday. 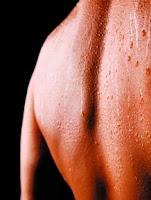 Pornography last week may not have been very pornographic, but Muscle was certainly muscular – or at least, testosteronic. The setting is a gym where three men strain their physiques and their psyches in a bizarre emotional triangle: Terry loves Dan, who Steve hates because he’s shagging the woman Steve loves, but who does Dan love? The three men arrive as stereotypes and strip gradually in a strangely touching clumsy dance of mingled bravado and vulnerability. There’s no dramatic resolution, only a slow-burning, sometimes shocking, journey of self-exposure and self-realisation. Best bits were the fantasy monologues direct to audience; weak link was the miming of gym equipment, but that small distraction aside Sion Pritchard, Paul Mundell and Stewart Wright were impressive in their roles. Written by Tom Wainwright, this production emerged from the BOV/ Theatre West initiative to support new writing. 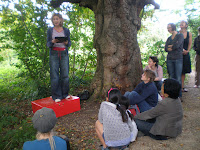 Personal passions in public places. That's the idea behind Speeches, a project devised by Lone Twin who "create community-based performances for specific sites and locations."
So of course I wanted to see what they were up to in Bath's Kennington Meadows - and if we can do it in Frome. The answers, in order, are: Enabling local people to soapbox their enthusiasms & expertise, and, Yes. Only I think in Frome we'd be more quirky, less formulaic.

Emily and I went along on Sunday and agreed foodie Cally was our fave. We ended our day out at the Odeon with phishfood icecream and 500 Days of Summer. “Boy meets Girl. Boy falls in love. Girl doesn't.” Genre parodies, giggles & sniffles, what's not to enjoy...

And now I'm doing what I'm sure isn't blogger etiquette - adding to a posting because I realise there's a couple more things I should've mentioned before bragging about swanning off to Greece. Collider at the Ustinov for one – part of their support programme for local writers – a rehearsed reading of a play still in development. Collider, in particle physics, refers to “two beams of particles accelerated and directed against each other, so that they collide while flying in opposite directions.” With the same force, perhaps, as a fervent evangelical pastor confronting an equally passionate atheist intent on refuting Creation? Shaun McCarthy’s new play isn’t afraid to push contrastive paradigms to almost parodic extremes: the pastor is a secret jew and his wife an ex-burlesque dancer, and one of the scientists is a vaudeville artist manqué (‘the unbelievable in search of the unimaginable’ he says, of both pursuits). The play does need more fine tuning, particularly around the character of the project leader, but complex issues of physics and ethics are entertainingly packaged to create a show that’s not just about conflict but is also often funny, sexy, and surprising. 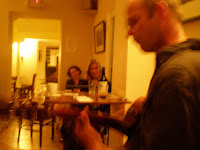 And huge appreciation to Brian Madigan who brought his 'raw acoustic songs, passion, wit, wisdom' to Frome Poetry Cafe and to the poets too. We were in unwitting competition with the Catherine Hill Bikers Wobble, and if small is beautiful, we were exquisite...

I'm off to Skyros island, twinned with Paradise, on Friday, so here's wishing you all a splendid equinox & misty mellow autumnal fruitfulness.

"If I'd read the write-up I don't think I'd have come," said the lady in powder blue & pearls in the queue for the loo after the matinee performance of Pornography at the Theatre Royal, "-it was all over the place. Was he a bomber?"
He was indeed, and the pornography lurks in the 2005 attack on London rather than in the snapshot glimpses of people whose lives this touched. Writer Simon Stephens says that in the end the play is not about terrorism but about human beings, and can be performed in any order. There's a haunting quality of compassion in the portrayal of each of the 8 characters: the difference between these ordinarily transgressional lives and the vengeful terrorist is only a matter of degree. 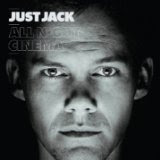 I loved it for the actors' spare & elegant interpretation and for the writing, which had that moving, tough, blend of colloquial and lyrical achieved in the best of Jack Allsopp's lyrics (listen to Blood on the new album All Night Cinema to see what I mean: an urban opera in two verses). Billy Seymour and Sheila Reid stood out in an outstanding cast; Sean Holmes directed. 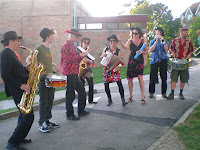 Frome's Merlin Theatre hosted the Made in Somerset conference of theatre practitioners, organised jointly by Theatrework, Salisbury Arts Centre, and Take Art. Delegates get a mini-programme to wear like the Glastonbury gig-guide, except with cow pictures instead of psychedelia, and lots of tastes from the extensive tapas of local-based work in progress and tour-ready shows. 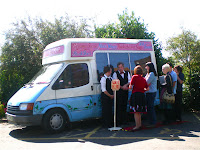 An inspirational, informative, and exhausting 3 days of showcases, talks, and discussions interrupted with breaks for excellent food & intensive conversations on the sunny lawns beside the Ecos amphitheatre, entertained by Frome Street Bandits.
It felt an amazing privilege to spend a day watching such a wide range of dance, drama, and community theatre - that's not an icecream van by the way, it's Fuse's I Scream van - and great that young people from the college came along to participate.
Several positive outcomes from the symposium too: Emma Stenning, new executive director, affirmed Bristol Old Vic commitment to support artists across the southwest, not just within the city. And Rob Jones, Policy & Development Manager for Arts and Creative Industries, refuted the tag of artistic backwater: "Somerset is one of the most culturally diverse places I've ever seen." Good news, then... especially for those of us who didn't know that post existed.

I'll leave you with a miscellany of recent news items you may have missed, piquantly peppered with my own personal prejudice perspective.
• Outrage over the raffle prize of a lamb from a school farm, in joint form, from the mother whose daughter sobs nightly because ‘an animal she bonded with is going to be slaughtered.’ Well call me Cruella de Ville, but surely the school’s intention was not to find her a fluffy sibling substitute but to show her where food comes from and introduce her to the realities of traditional rural life? Still, one more vegetarian is no bad thing…
• Shadow Cabinet Minister Alan Duncan has been sacked for saying he feels like he’s been ‘on rations’ since the new rules on expenses. Am I the only one who feels this is a little unfair? He was merely whingeing - I want the bastards stopped from ripping us off, I don’t particularly want them to like it. 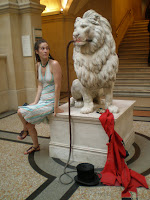 • ‘Lunacy’ says art critic Brian Sewell of Bristol Council's decision to let citizens vote before scrubbing out graffiti, after over 300,000 voted with their feet for Banky’s exhibition. “It will result in a proliferation of random decoration” he predicts. Imagine it- an enjoyably decorated environment, a sense of personal choice for the hoi polloi... dangerous stuff. “A world gone crazy.”
• Tough words too from Joanna Lumley, who says aging actors should accept media preference for young faces. “I think we’ve got to be a bit sensible’ says Joanna, a bit sensibly. “None of these things going to change, so get over it.” Journalists leapt to compare her comments to the complaints of ageism by Anne Robinson, who has just unveiled a new face of which journalist Liz Hunt said “I’m all for growing old disgracefully, but you should be able to move your face enough to laugh about it.” Tee hee. I’m with lovely Rose Flint, who has decided the time has come to forget about her inner child and nourish the inner chrone.
Posted by Crysse at 6:30 PM 4 comments:

Email ThisBlogThis!Share to TwitterShare to FacebookShare to Pinterest
Labels: Made in Somerset, Pornography 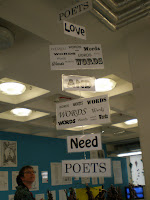 Palindromic poems in dangling mobiles, poems on posters, on screens, on boards, on badges, on jigsaws.... the Arnolfini top gallery has been transformed into a word playground by the Why we Love Poetry exhibition, an all-age interactive experience open until 13th September. 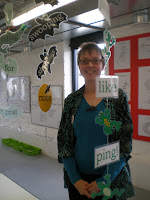 I first met Liz Brownlea, one of the team who created this amazing poem creche, some years ago so it was good to catch up, and to indulge in some lachrymose musing on the magnetic board: love empty as snow after winter rain.

Arnolfini is hosting a range of other events for the Bristol Poetry Festival including readings and slams. I've been a fan of Byron Vincent since we shared a stage in Poole for a Bla-di-Bla poetry performance, so I went along to Brimstone: five poets billed as 'funny, astute... vivid and youthful ... shiny and exciting.' But there's something enervating about the studio theatre as a venue for poetry, and while it's good to hear new work, I missed the anarchic energy I was expecting - though Anna Freeman's spot was excellent. 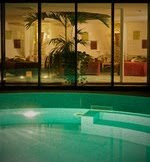 My antidote to non-arrival of Indian summer: Indian blossom steam room at Longleat's AQVA SANA, during a long & luxurious 'pamper day' which has no literary connection except that I went with Alison Clink and we did talk a bit about writing... when not blissed out on heated seats breathing sensuous steam... 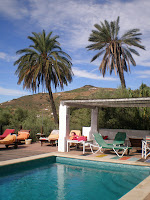 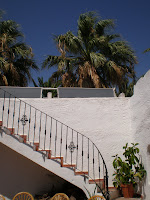 and receiving by email the "recipes for Cortijo Romero" written by participants on a hot starry night in Andalucia. Lovely to read these little sparks from an unforgettably special week - and the note from one contributor: "amazing how these recipes seem to able to capture the whole mood, and essence, of the place in such a way that I'm finding I can tap back into it whenever I read them!" Now, these voices are what I call shiny and exciting.
..
Posted by Crysse at 4:20 PM No comments: