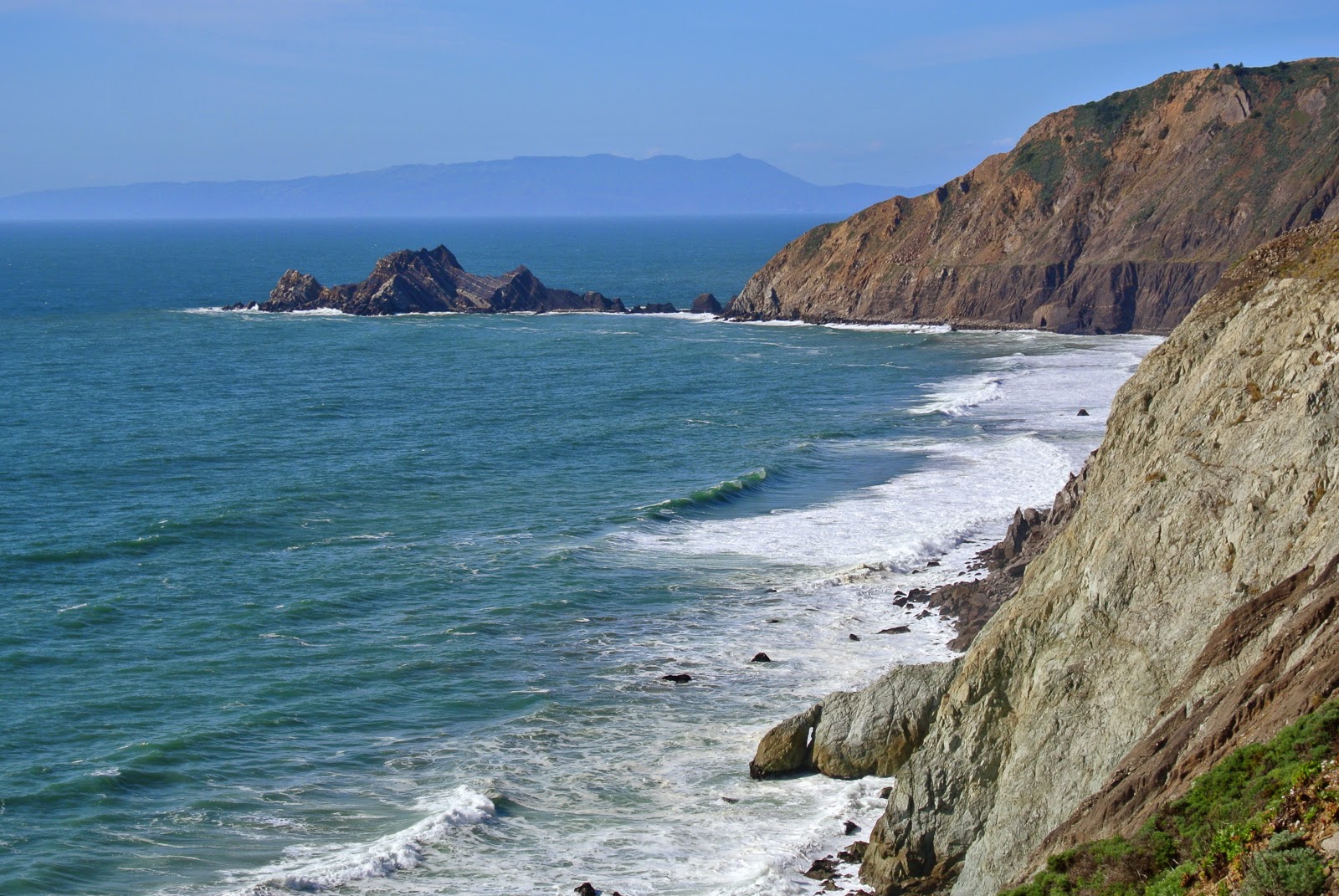 Great to be moving around again, after last week's blip, and exploring more of this marvellous coast. The Devil’s Slide, a notorious stretch of highway running tight to the shoreline from Pacifica to Montara, is closed to traffic now, with that heavy flow tunnelling its way through a mile or so of mountain to regain Cabrillo Highway further south. The old road has been reopened for walkers & gives fabulous long views of the coast ~ when Mo and I walked it, we saw whales blowing and breaching as they moved slowly northward on their migration path. Almost as spectacular as the wave-crashed crags below were the rocks above, swirled in intricate patterns from their complex conglomeration.

California is officially in 100% drought so it feels almost bad to enjoy wandering in sunshine on the headland above Pilar Point among wild strawberries and through the dramatic eucalyptus groves above the bays... but there's been enough spasmodic rain to keep me to my self-set writing schedule too.  And here's Mo playing at Classique on Friday morning, after which we went for lunch at a proper diner where boys walk round with pots of coffee topping up your cup and there's hundreds of ways to cook eggs... simple pleasures!

English heroes had a good week for birthdays, with Wednesday shared by St George and Shakespeare, and the launch of a free on-line magazine of all things bardic including a Shakespearean tour of Bristol from playwright Tom Phillips.  And, unbelievably, this is Star-date 27 of my transatlantic trip, four weeks in and only one to go. We're off tomorrow for a trip to Lake Tahoe, where it's currently snowing... Enjoy your bluebells, England! See you soon...

Posted by Crysse at 6:43 PM No comments:

San Francisco Bay in sunshine: Alcatraz... seals basking on Pier 39... I thought this would be a pleasant break from writing and new running routine. I was half right. Our day out ended with me collapsed & feverish for 36 hours, cautiously emerging rather wobbly and very wary. My aim in re-starting running after a 24 year break ~ in 1990 I completed the New Forest Marathon in 4 hours 15 minutes ~ was to enter the Frome Half in July as a kind of birthday celebration but that's unlikely now. Mo and Anja, who arrived to stay in England last autumn to find me in a similar state, stoicly resumed care roles.

I'm on the up now but no more 7 mile runs in the near future. In between whimpering and dozing I've managed a jigsaw & 2 movies: Mud, a pleasant Tom Sawyer fantasy with Matthew McConaughey and two sweet little boys, all too box-fresh to be credible dwellers of the Arkansas lake islands. The political thriller Page Eight is a much better movie: as one critic says, "I'd happily watch this cast read the phone book, but fortunately the script by David Hare (who also directed) is intelligent, engaging and generally makes good use of this singular cast's talents." Bill Nighy especially is absolutely brilliant, mercurial and mysteriously sexy.

Meanwhile over the pond, Billy Bragg played outside Raves from the Grave last Saturday, which is annual record store day, causing as you can imagine quite a jam in Cheap Street. I see Billy's also promoting Trussell Trust food banks, which despite a fearless campaign from the Mail on Sunday to prove that if you tell a lot of lies to compassionate people, some of them will believe them. I'm pleased to note the outcome was a surge of donations.
Posted by Crysse at 6:22 PM No comments:

Two weeks into my Californian idyll. There've been outrageously hot days with skies eyeball-scorching blue, and translucent days with sea-mist surging and ebbing indescisive as a wilful child. And though this landscape is now familiar I notice new details every day: craggy avenues of peeling eucalyptus, golden poppies by the highway, pelicans gliding and plummeting into the waves, redtail hawks circling the cedars, hummingbirds in the garden (I'm inordinately proud of this snap, first time I've caught the 50mph beat-blur looking wing-shaped.) 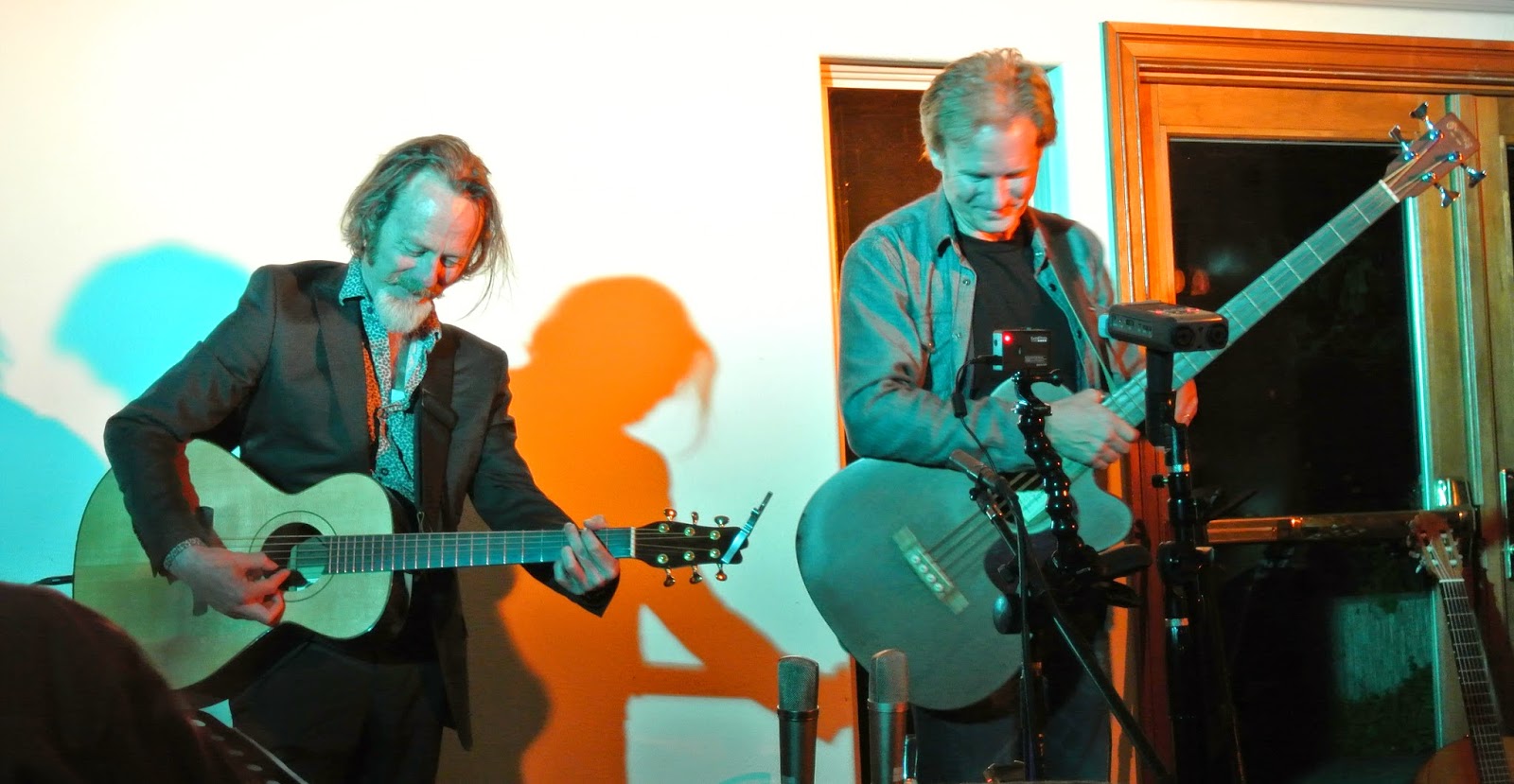 As well as supplementing stints of writing with daily explorations along the coast and foothills, I’ve been plundering my host’s bookshelves, enjoying Sebastian Foulke’s passion for PG Wodehouse and Bill Bryson’s for American history,  though failing with the much-hyped Stoner ~ whoever said it was ‘the perfect novel’ maybe meant it as disparagement of that form. The rhythm of life here tends to quiet evenings but Friday was Cyprus Meadows monthly folk night and we went along to hear guests John Lester  and Paul Tiernan, on tour with personal ballads played jazz style. 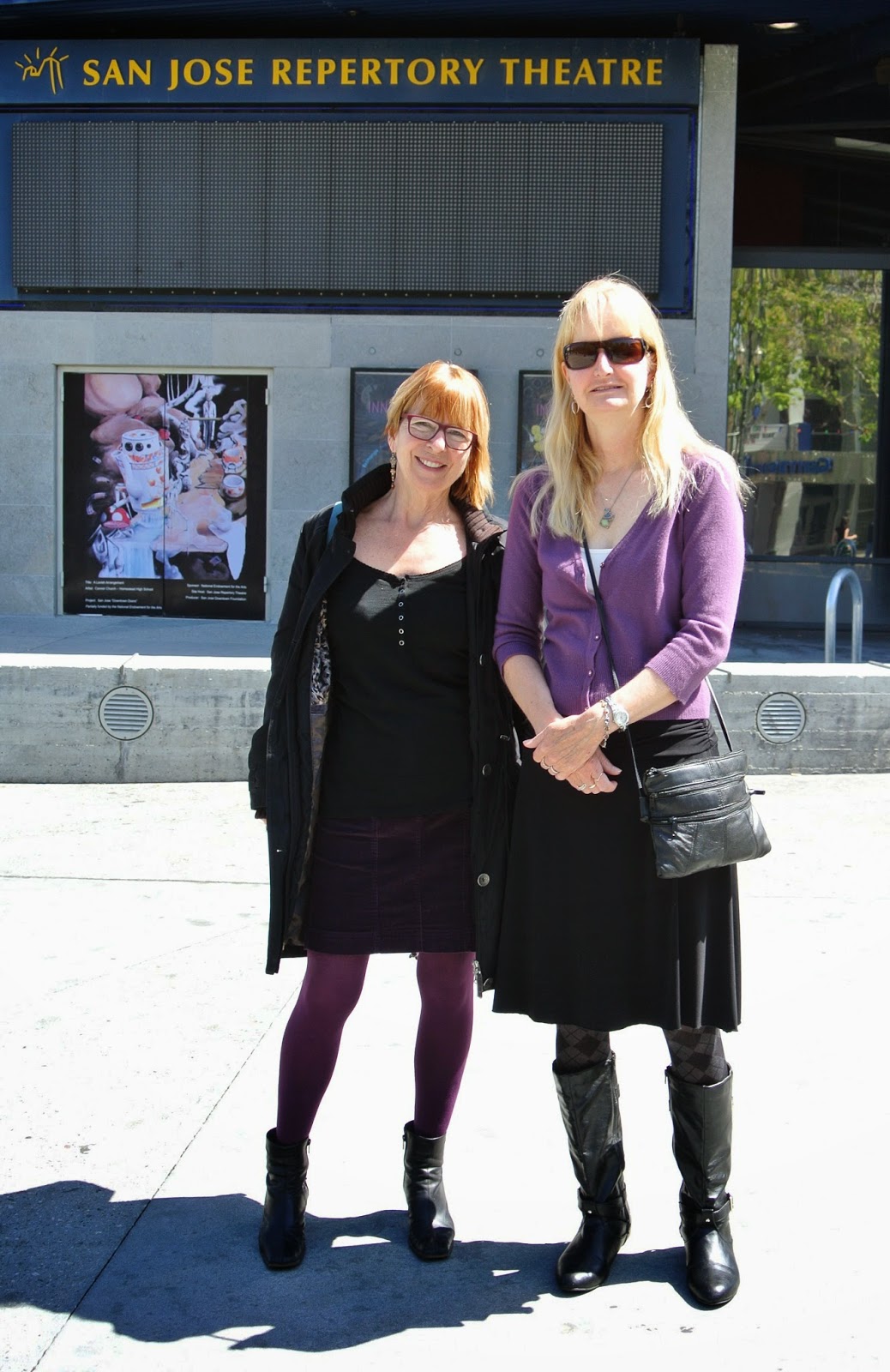 And on Sunday we drove inland to San Jose, which has been so upgraded in the last few years that Anja, who used to live here, didn't recognise most of it. It's now spacious and sunlit with fountains and flowers and street sculpture like a city in southern Spain. We were here primarily to see Game On, a new play by young San Franciscan writer Dan Hoyle, and a model for anyone wondering if it's possible to use drama for propeganda.  Dan Hoyle's big message is environmental awareness and the need for Western producers to consider insects as a future food source, but because we're laughing at the baseball gags (well, I was bemused but others were howling) and because we care about the two main characters, there's no sense of a 'worthy' drama, though I did emerge better informed on comparative costs & protein provision of insect farming over beef. Alvin the entrepreneur and Vinnie his temperamental sidekick remain throughout confined in the same room (impressively convincing, more like a show-house than a stage set), as they wait and plan their big pitch ~ a classic situation of dramatic claustrophobia successfully exploited by playwrights from Pinter to Rob Grant & Doug Nailer in their Red Dwarf scripts. Result: rising tension, exploding tempers and a wild food fight with grasshopper rolls and impro baseball bat... also unexpected twists and my personal highlight, the whale-song rap from Glen (Cassidy Brown). San Jose Rep Theatre is a great venue, too.

Posted by Crysse at 4:03 AM No comments: 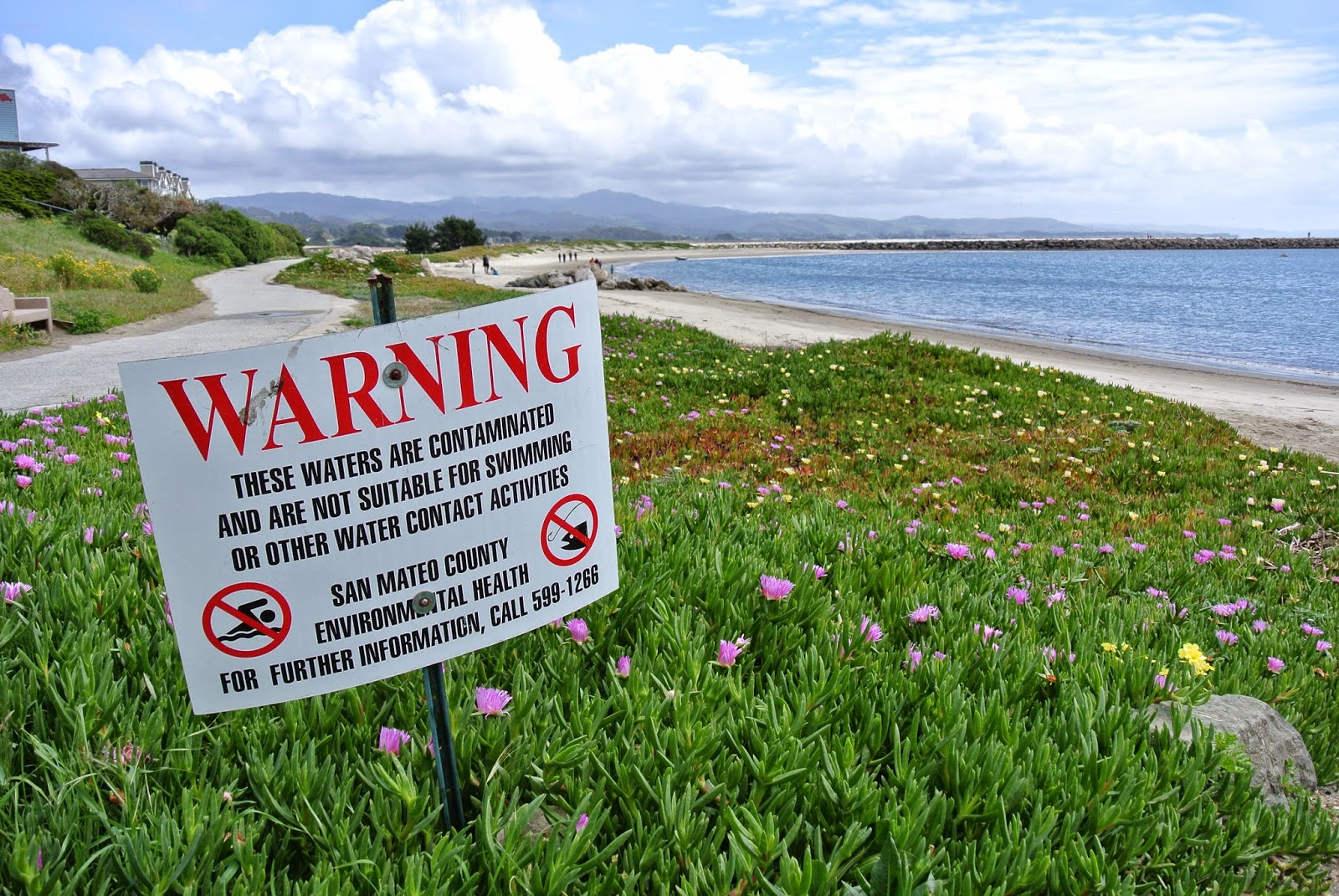 A week into my 'writing retreat' in Half Moon Bay, where the bay by surfers' beach is empty and a sign on the shore seems to acknowledge the terrible legacy of Fukushima.  No more barefoot walking through the shallows on these beautiful sands for me if radiation contamination along the California coast is now frankly admitted. I could say more, but I do that on facebook, so here I'll just say: the sky is blue, the iceplants are flowering, I'm enjoying long walks and long hours of writing... for me, at least, life here is very good.

I've followed the coast track all down the long scimitar beach, and over the headland to the seal sanctuary at Moss Beach, I've watched the sun set over the ocean from Miramar, I've enjoyed a day clambering the extraordinary rocks at Pescadero ~ these dragonish formations carved by erosion into the sandstone over millions of years have the strangely unonomatopaeic name 'tafoni' ~ and a convivial night of shared readings with El Granada writers' group, and I've spent quite a bit of time on my laptop too. Which is all exactly as I hoped it would be. 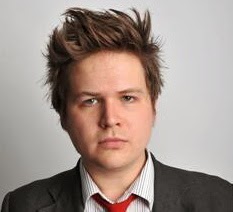 So that's it for this post, except for a quick tip for everyone back home:  Luke Wright is bringing his Essex Lion to Merlin Theatre on Thursday April 24th, and it's a definite don't-miss. I've seen the show already, and if I wasn't here, I'd be going again, so if you're in or near Frome that night, you're passing up a treat if you don't go. Tickets only a fiver and there's (bookable) supper available too. Luke always gets brilliant reviews: here's mine, from last October: "... hilariously satiric, angrily political, or unexpectedly compassionate... as well as rapid-fire rhyming, striking imagery, and sublime turns of phrase, Luke's observational comedy is never far from self-deprecating and it's this quality that makes his flamboyant style work so well. Whether he's pretending to strut in Cuban heels, parodying his penchant for posh plumbers or recalling teenage delusions, he reminds us that we all share the same conviction as the Essex lion spotter: how can a thing that makes you feel / be anything but fucking REAL?"
Posted by Crysse at 2:51 AM No comments: