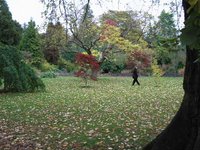 It's been a great week for Autumn walks, in Bath and Stourhead, after a monsoon start. Hard rain fell throughout my Sherbourne House poetry workshop day but failed to deter some wonderful words from the participants: ‘histories motivations, distractions and beliefs’, in the words of the (invisible) installation piece ‘Bringing down the Gods’ in Stourhead. 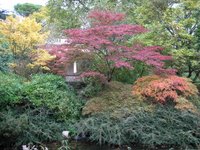 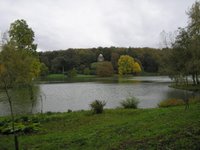 Peter and I walked there on Wednesday, relishing the colours of the trees, not just the leafy auburns and crimsons, but the exquisite greys - lilac, aqua, mole - of the ribbed tree trunks. We nibbled sweet chestnuts and hawthorn berries - both considerably nicer than the pub lunch - and surveyed Elysium from the thollos, wondering which heights in Nepal Hazel is trekking now.
Friday night I was a guest poet at WHAT A PERFORMANCE at St James Wine Vaults in Bath. 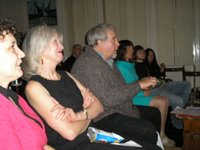 Billed as 'verbal antics and music', performances ranged from passionate eco-politics to melodic Joni Mitchell, with a great anti-seagull rant on the open mic.

Saturday's writerly event was the launch of Kevan Manwaring's novel 'Windsmith', the second in his bardic odyssey, in the Raven upstairs bar with the celebratory mood heightened by a smattering of rugby supporters. 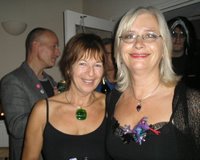 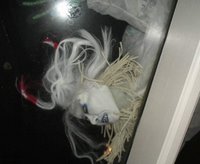 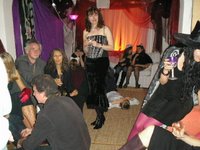 And then a great halloween party which I'm excusing into this posting as having a tenuous connection to the world of writing via Dracula and Frankenstein and because it was brilliantly theatrical, right down to the severed hand in the punch. Thanks Howard & Claire! 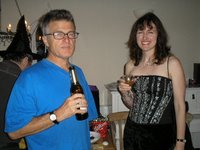 Posted by Crysse at 2:09 PM No comments:

I don't know how I got the idea October would be a quiet month. Tuesday's the first meeting since our Kendal jaunt for the "Live Literature" consortium (Q: Is "Spoken Word Performance" a better term? Discuss.) Jo Dereza summarises feedback: overwhelmingly positive. So there'll be another Lit Up showcase in 2008, goodee. We talk about poetry performance programming, how to develop audiences, and the diversity of interests in the southwest -well we are, as Colin Brown points out, bigger than Portugal.
I'm relieved when I emerge from Arts Southwest's Exeter office to find the torrential rain has eased and a penitant sun is busy prettifying the field views as I drive across country for an evening visit with one of my mentees.

Elspeth Penny lives in an old farm house just below the iron age fort of Cadbury Castle, and despite a new baby still finds the energy and enthusiasm for her writing, though time is more difficult. She breastfeeds Arthur while we discuss character development. I'm impressed. 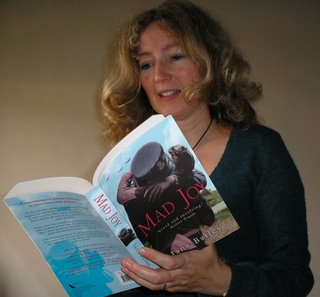 Thursday, and my friend Jane Bailey from Cheltenham has come to Frome Library to talk about her books 'Tommy Glover's Sketch of Heaven' and 'Mad Joy', and her writing life, in the Library to an intent & appreciative audience. She's candid about the need to be brusque with memories. "Why shackle yourself to truth? Fiction has far more possibilities of being dangerous and passionate. Have fun with it." 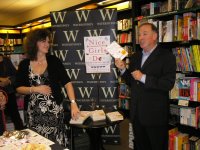 And an equally enjoyable evening: Sarah Duncan's launch party, at Bath Waterstones, for her new novel 'Nice Girls Do". She treats us to a reading from the opening - the opening line, in fact: "Sex". 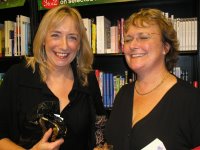 Here's Sarah with her proud publisher, and my friends Alison Clink and Katie Fforde finding writerly things in common - ie the fact I've asked them to pose for me!
Posted by Crysse at 10:52 PM No comments:

Busy week. Tuesday is Writers Group at Emily’s. Such a privilege to be in a group with three inspiring women writers - Debby Holt (Ex-wife’s Survival Guide, witty debut novel last year), Jill Miller (Happy as a Dead Cat, seminal feminist novel) and Emily who's a poet and singer. We’ve been meeting monthly for years, I’m really proud of this consistency and even though I haven't brought much to read recently, the support is invaluable. We chew over this indigestible stuff called life but always find delight and laughter too. “If in doubt or doldrums, dance” says Emily. 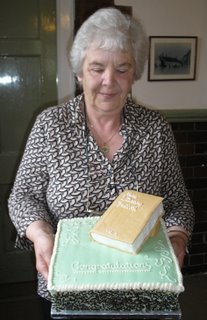 Wednesday, and I join with nine other writers in an afternoon of readings organised by Adrienne Howell to celebrate the 10th Anniversary of the Mere Literary Festival (that's Adrienne with the amazing celebratory cake). 'With Great Pleasure' gave us free reign with our choice, resulting in a fascinatingly varied range, from Ezra Pound to Peter Pan, via Laurie Lee and Jenny Joseph's 'wearing purple'. Annabel Venning chooses the journal of Fanny Duberley, an officer's wife who witnessed the Charge of the Light Brigade first hand - an intriguing glimpse of social mores as well as military incompetance. My contribution is a dash of Daisy Ashford, the 9 year-old whose story of "The Young Visitor" has never been out of print since 1919.... read it and weep.
This evening sees the initial meeting of the 2007 Words@Frome Festival committee. It always seems strange in autumn to be tossing around ideas and names for an event next July, but here we are again, meeting in Wendy's front room with wine and nibbles and wriggly germs of ideas that in a few months time will become hard copy in the Frome Festival brochure.
Thursday's another Spoken Word event at the Merlin: "What Independent Means". I planned this as readings plus discussion, with seven writers who reflect the different aspects of this road less travelled, in both poetry and prose, and it's a really enjoyable evening. We hear poems from Mary Maher, Genista Lewes, Charles Johnson, and Robert Palmer, and short prose pieces from Keith Walton, Rosie Jackson, and Peter Please. 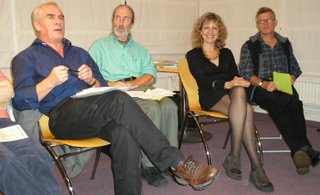 Even more importantly, everyone shares frankly and intimately the story of their journey to publication. Peter talks about this 'making public the private' as exciting and nerve-racking, and Rosie reminds us Virginia Woolf was originally self-published (she got her husband to set up Bloomsbury Press for her.) As Charles says, encouragement for writers shines like gems in the dark. A jewel of an evening.
Nitty gritty for interested writers: contact Keith at Brimstone Press - Peter Please's site is here . Charles spoke for Flarestack. Rosie represented Tears in the Fence: email david@davidcaddy.wanadoo.co.uk. Robert, who facilitates high quality self-publishing, is on robertwpalmer@onetel.com. Help with non-fiction is offered by Julia McCutchen.
Posted by Crysse at 12:29 PM No comments: 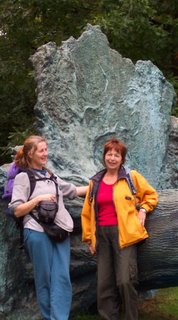 Hazel, my writer friend, and I were discussing the function - or do I mean the mystic hypnotic power - of blogs while we were walking in Longleat yesterday = that's us by the blue tree. She's been blogging for a while, giving the rundown of her training for the big HepC trek in Nepal later this month (see side panel). I'm interested that writers, on the whole, have been slow to subscribe to this new means communication - I suppose it seems a bit of a busman's holiday, to some, to scrawl on screen without commission or payment. But the current issue of the journal of the Society of Authors includes a cautious endorsement from 'Three authors who blog'. Purposes are varied. Shoo Raynor has used his to mourn the passing of his cat and extol the benefits of giving up milk. For Norman Geras it was the 'fun' aspect that hooked him. The beauty of a blog, he points out, is you can do what you want with it and you don't have to answer to an editor, or submit to copy-editing either. Tim Heald has another take entirely: the commercial motivation of posting reports that will encourage speaker's agencies to contact him.
I guess there are as many reasons for blogging as for writing anything - Primo Levi whittled that down to 9 but maybe the actual figure is closer to the number of literate humans on the planet - and they're all aspects of the same essential impulse: to yell at a confusing and often indifferent world "I'm here" and to whisper to ourselves "This is me."
My name is Crysse and I am a blogger...
Posted by Crysse at 1:28 PM No comments: 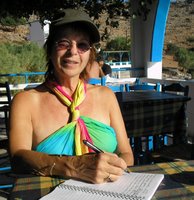 Home again.. and in culture shock. Why is the sky not lapis lazuli? why is it heavy and grey and wet, why am I damp when I'm not swimming? Why are there more cars than goats, where have all the asphidels gone? Just to remind myself it was all real, I'm posting a picture of me at Phoenix Bay 3 days ago... yes, this really was October.
This is Crete, on the south west coast, inaccessible and fiercely beautiful landscape, where Peter and I spent last week. Inaccessible that is except by boat and to the intrepid walker - we walked. Down the Samaria Gorge, longest in Europe, and all along from Agia Roumeli to Sfakia, with stopovers to swim, eat, drink, sleep, and generally enjoy. It was exhilerating, challenging, and generally mindblowing.

One of our stop-over villages was Loutro, where I've been twice to lead a creative writing course for World Spirit, and had longed to explore further along the remote cliff paths. My chance came with a writing commission - to walk 'Undiscovered Crete' and write up my diary for Greece magazine. I know... I KNOW! That is absolutely the best project a greekophile walking-fanatic writer could be offered.
So no problems with enthusing, eulogising, and generally waxing mega-lyrical about the holiday, the places, the food, the weather, the everything. Headwater, who organised the trip, extole the isolation -" tracks used only by shepherds, every visitor still a novelty"- but that's a tad over-romantic. Tourism is discreetly marketed in this corner of the island, angled to appeal to upmarket adventurous rather than the backpacker, but it's clearly the primary industry. Our hosts at the hotels in each tiny village were charming, but watching them sit with their mobiles and sleep-walking eyes, it's hard not to see the soul of a tough Cretan farmer somehow trapped in the pragmatism of modernday Cretan economy. I love the blue-and-white painted buildings and exotic blossoms, but there's a sense that some consciousness of Greece is being assiduously cultivated here for our benefit, as in a theme park. In Chania too, the elegant Venetian harbour becomes at night a consumerist theatre, almost a film set, vibrating to the strains of bazooka and the pleas of the restaurant touts. "Greek tourism is run with goat-herd mentality" Peter commented,"They get them all into one area and then they fleece them."
Not that any of these reflections could cloud our enjoyment of the week or appreciation of our generous hosts. It was blissful, whether clambering rocky paths for up to seven hours at a time, or chilling out with a Mythos trying to decide the right name for the colour of the jewel blue sea... I'll have to stop, I'm salivating with all the memories. 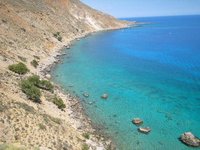 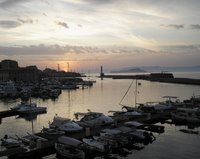 ps helpful friend has just emailed to point out we were probably charmed by a bouzouki rather than a bazooka in the Chania restaurant. She is right, and I bet Stratos wishes he'd stuck to stringed instruments rather than guns on his birthday night - he was bemoaning the pellet holes in his awning when we left.
Posted by Crysse at 9:21 AM No comments: