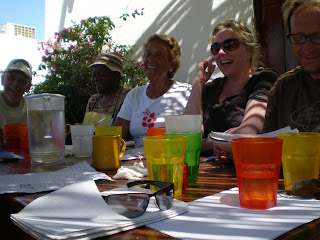 "Nothing is forever, but some things are very special" says Graham at Demos as we start our second week. Skyros Writers Lab this year was both special and ephemeral, and it's strange to be back in Frome with Glastonbury festival on the radio, downloading images of everyone I've left and not-quite understanding we won't meet up today in the white sundazzled walls of Skyros town. Like the hot sand and the warm sea and the high cerulean sky, they're all still on the slowly circling mind-carousel of memories. 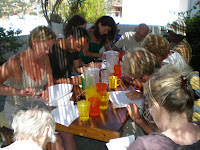 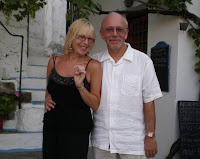 So as a quick homage to my wonderful group who seized on every bizarre exercise I gave them and flew with it, here's an acrostic of magic moments:

S arah's ode, evoking varied voices and sharing and laughter, summed up our 'writer's lab'.
K ala! each day as Vasso's feasts appear on the fig-tree terrace.
Y oga early, beach-bunnying all afternoon, trailing up cobbled steps at dusk, strolling late downtown
R ooftop bar under the stars, where we linger to make each day three times longer than the night.
O nly this of me.... Rupert Brooke's memento mori, his monument a watchtower for full moon and solstice dawn,
S oiree on the last night: all that jazz of living: drama and poetry, soliloquies and songs... 'Nkosi Sikelel iAfrika'

C elebratiing creativity, and commitment, with passion and compassion,
E njoyment our essential way. not losing sight of shadows in the sun
N othing is forever, true, but 'now' is all we have,
T rusting is our difficult necessity; like Auden said, we love or die.
R eaching the edge is scary, and then when pushed we fly.
E nding as we began, alone. And if we are lucky, beloved. 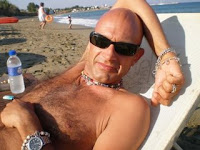 And on the theme of returning home, I'll end with a plug for 'An Utterly Impartial History of Britain' by John O'Farrell, which had me helpless with giggles on the beach & I became one of those annoying people who makes you take your earphones out so they can read you bits even though you can't understand because they're laughing too much.
Laughter is what I will remember, like the sun and the cidadas and those ever-unnameable blues of the sea and the sky. 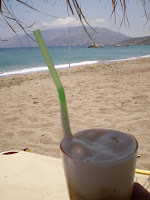 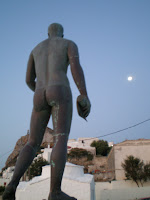 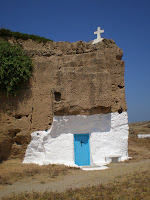 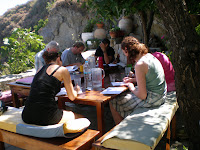 Recipe for a fanatastic week: Take a dozen fresh writers, a feverishly blue sky and a fig-tree terrace above the Aegean sea. Bake at 30 degrees. Garnish with wonderful words & laughter and serve daily.
I've never not had a great time in Skyros (double negatives are such an English thing, Canadian Craig reminds me) but this course is seriously special. And I'm here with Hazel Carey, who is one of those people you get the "Some people touch your lives" fridge-magnets about. What could make the week more perfect? Well, solid sunshine, swimming in warm sea each afternoon, full moon at night, solstice dawn, mellow music in the bars and the occasional crazy night... that does it for me. 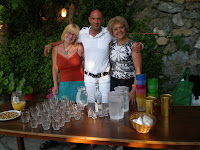 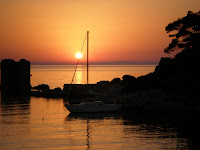 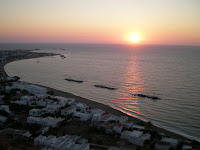 'Appreciations and suggestions for improvement?' is the traditional request as we start the second week, meeting with "If it aint broke don't fix it" and general agreement that friendship has been the key. 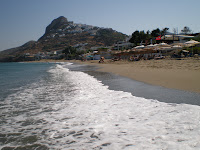 Hazel ends our brief breakfast meeting with the words of George Eliot: "Oh the comfort, the inexpressible comfort of feeling safe with a person, having neither to weigh thoughts nor measure words, but pouring them all out, just as they are, chaff and grain together, certain that a faithful hand will take and sift them, keep what is worth keeping, and with a breath of kindness blow the rest away."
Posted by Crysse at 8:52 AM No comments:

A quiet week. Other than celebrating these sunny days with bicycle rides along lanes brimming with cowparsley, I've spent most of the time doing that thing all writers have to do eventually: write. Five projects to complete, five days to do it... even a dyscalculate like me can do the math. (Odd word, isn't it. Why has maths morphed into transatlantic singular these days?) (And another thing: why gist but jest - and then why gesture?)

And! you heard it first here: while everyone else was punditting Claire to win, this was the blog that held out for Lee, now Alan Sugar's chosen Apprentice of the year. Now if I could only be bothered to tune into BB I could see if my early pick of cross-dressing Mikey was similarly perspicacious... 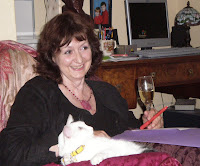 'I once out-poeted the town cryer at the Hay on Wye festival' confessed, or maybe bragged, Rose Flint at the final gathering of the Words@Frome Festival meeting, a very relaxed affair in Rosie's garden. Rose has just scooped the top prize at the Cardiff International Poetry Competition so she is entitled to brag, tho she would never be so bold. We were on the topic of Soapbox Poets, Rosie's innovation for the first Saturday, in our countdown process to the big week in July. I'm off to Skyros tomorrow, returning just as our simmering festival plans come to the boil.

So there will now be a short intermission. And I'm off to pack suitable clothes for writing on a Greek island....
..
Posted by Crysse at 9:15 AM No comments:

"You can be seen as successful, but I can assure you as a career it's pants" says David Johnson at the Library Writers meeting on Monday. 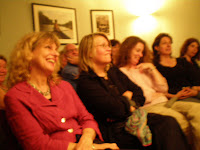 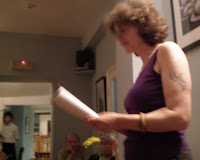 He's talking about becoming an accidental poet. "I write poems but I think it's a waste of time" confides a newcomer. David is sympathetic. He tells us he is rather against poets who don't use everyday language, although his entertaining new collection is called "Bombazine" so he must make some exceptions. David is rather against quite a lot, according to his Grumpy Old Poets manifesto, and speaks longingly of early nights with ovaltine although staying on to guest at the Poetry Cafe. "Love in a Warm Climate" is the theme. A full house enjoyed listening to David open with sustainable angst and close with sizzling anguish, and a dozen local poets sharing torrid and tender passions too. 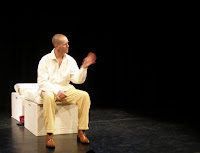 Bath Fringe again, to see "Diary of a Madman" at the Rondo. Seb Steiger plays Poprishchin, whose diary entries arc through humorous to harrowing as this initially Pooteresque clerk spirals down through his own fantasies to the graphic solitude of the madhouse. Seb's solo performance is stunning, deserving the twelve-out-of-ten reviews he's been collecting, and the adaptation by Steve Hennessy finds a timelessness as well as troubling poignancy in Gogol's short story. The play goes to Bristol next: more information here.

Admit to watching reality tv and you get one of two responses from other writers: a flicker of shocked distaste, or a frisson of relieved recognition. For me, reality programmes reveal the psychological preoccupations of our community - and that's our readers. Rejection is a significant theme. I tend to skip the shows but watch the commentaries & the interviews with the rejected. 'The Apprentice - Your Fired' has been great. "Stop moaning about working in a male-dominated environment," scoffs the studio commentator of candidate Helene, "Life is a male-dominated environment." Oscar Wilde couldn't have put it better. Dyslexic Lee, dubbed by the Telegraph "oafish", is my fave to win. And of course, as Alan Sugar's Prospero bows out, Queen Titania/Davina is shimmying in... anyone else fancy Mikey the big blind Scots transvestite?
..
Posted by Crysse at 2:29 PM No comments: