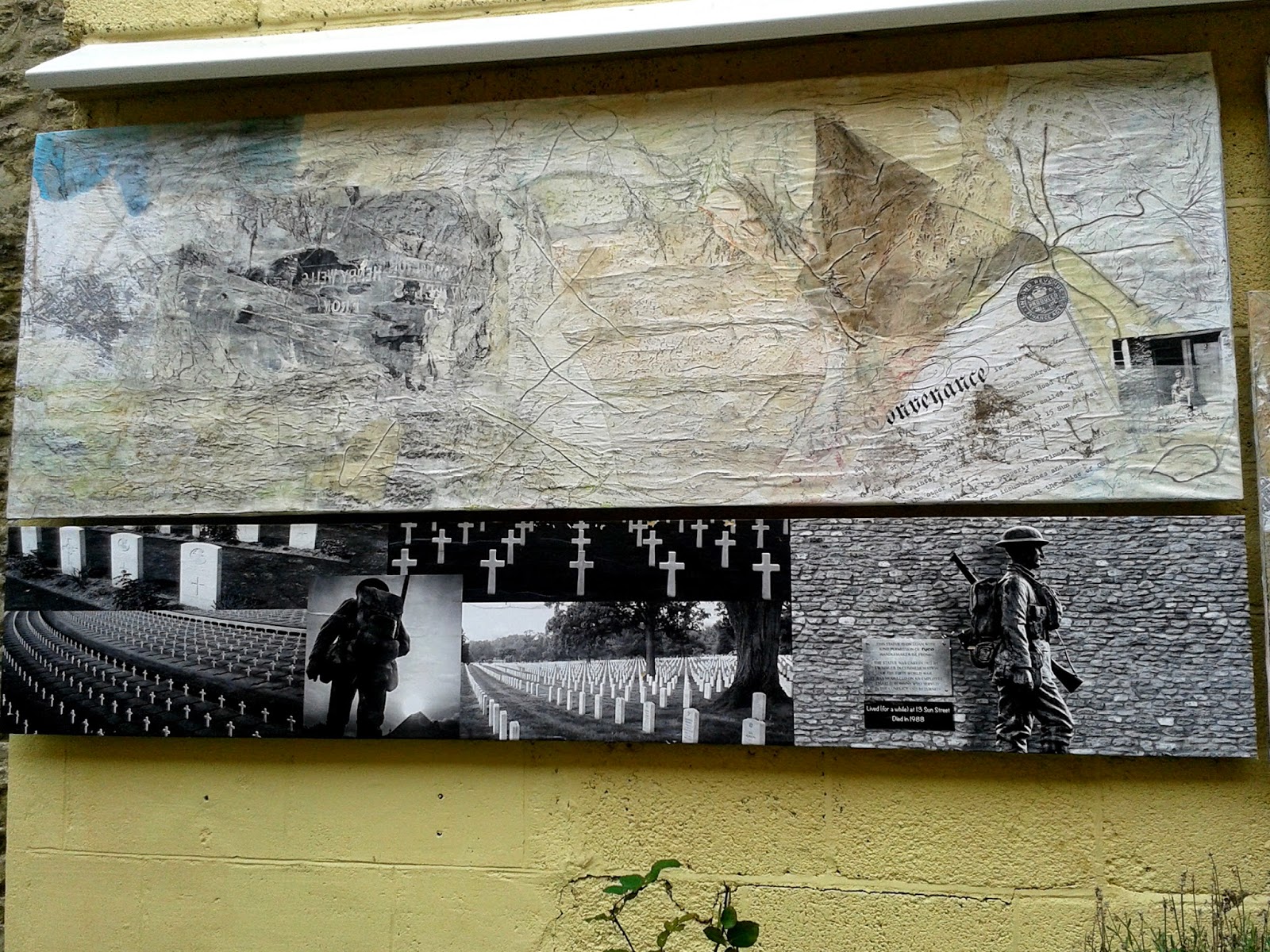 It's Open Studios across Somerset for the 2014 Arts Weeks, a fortnight ending October 5th, with several venues in Frome. There are some interesting local-history installations at the back of 15 Sun Street : here's one of the two big murals by Sally-Anne Fraser using 'stitchery and a variety of techniques to bring outside space to life.' Photo montage is by David Goodman. 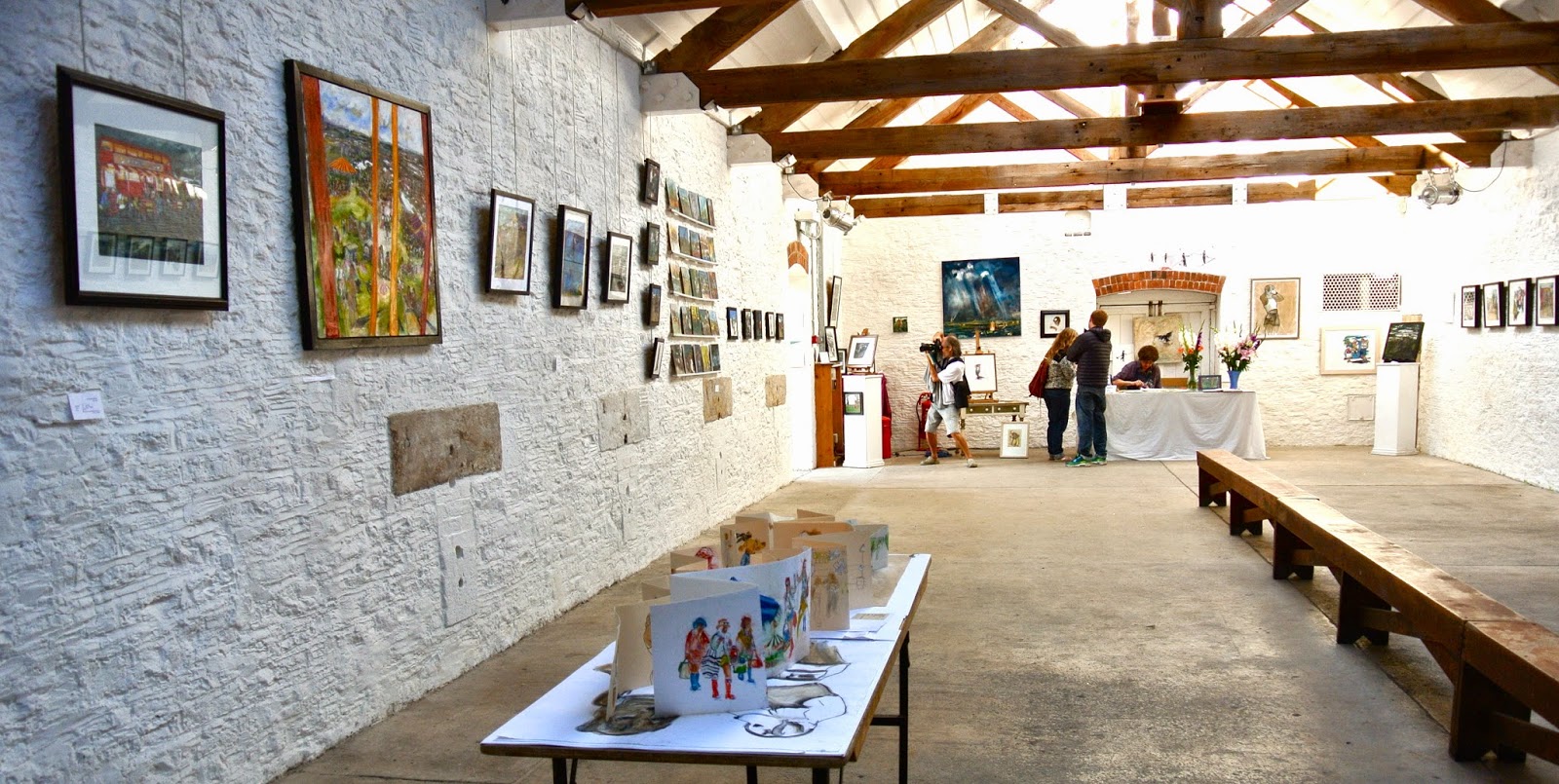 Over at the Silk Mill, Annemarie Blake has a wonderfully vibrant and exciting exhibition of paintings from a week spent on site at the Glastonbury Festival, mixing lithography, etching, conté and egg tempera "to capture the energy and atmosphere of this annual temporary city." There's also a lovely portrait of Annabelle Macfadyen, accordionist extraordinaire, doyenne of the Frome Street Bandits, Lady Mayoress and a special friend of mine. Upstairs in the workshops, Amanda Bee has sketches and prints from Cornwall and 'Raggedy' has the usual amazing selection of 'wearable art' for anyone sharing her desire that we should all 'dress like nobody's judging.' 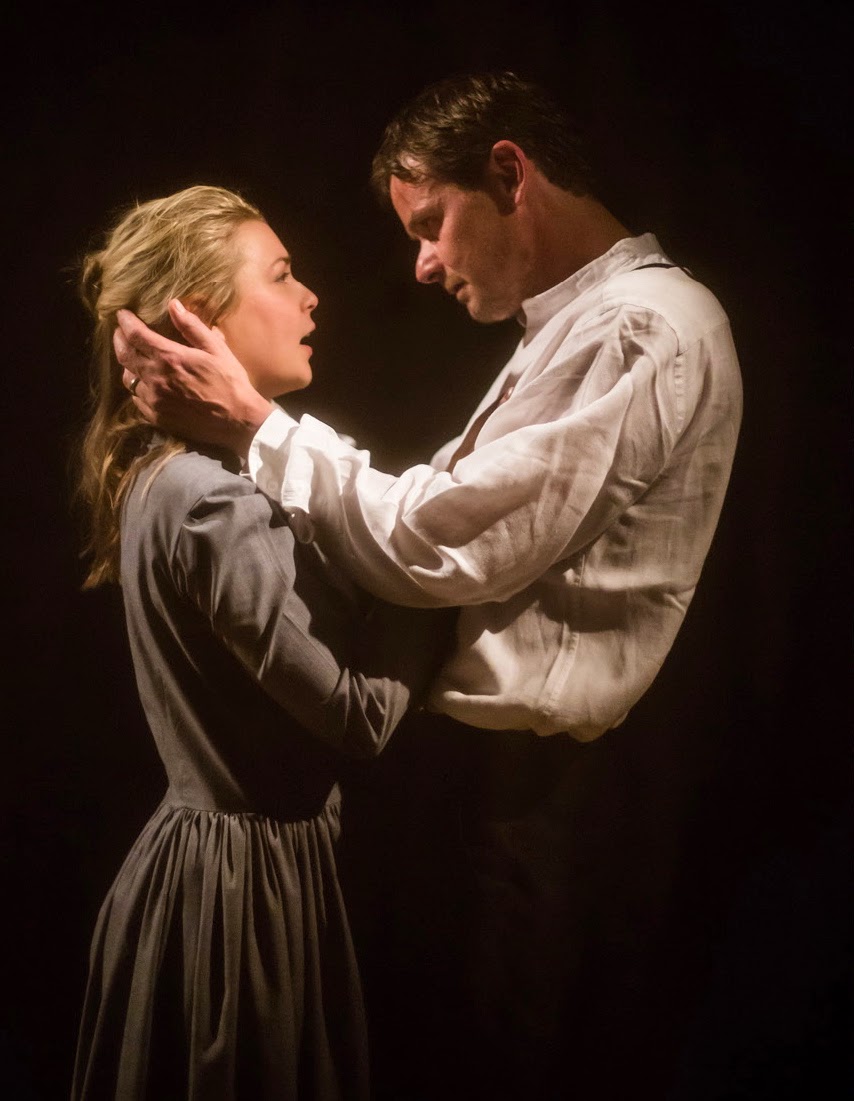 Bath's Rondo has been basking in a Brontë bonanza, staging stories from all three of the emo sisters: Wuthering Heights, Jane Eyre, and the least-known Tenant of Wildfell Hall. Rosie and I sallied forth on Saturday to do, not quite the Full Brontë, but at least Emily and Anne. Butterfly Psyche and Livewire theatres have combined their talents to produce a set of impressive adaptations, retaining the 19th Century Gothic melodrama of the writers' imaginations and creating scores of richly-varied characters with just two actors. Alison Campbell was simply superb in the complex tragedy of Wuthering Heights, identifying passionately the longing of every obsessive adolescent to find a lover "more myself than I am." In Dougie Blaxland's faithful interpretation, Alison takes on a couple of Cathys and a Nelly, while Jeremy Fowlds has a brace of Lintons, a Lockwood, and several men whose names begin with H, as the drama unfolds in 90 minutes of compelling storytelling. Truly disturbing ~ I really did dream of ghosts ~ though I'd have liked a sound design with more wuthering (and less Greensleeves) but impressive performances directed by Jazz Hazelwood rightly won huge audience praise.  The final play of this traumatic trio,

The Tenant of Wildfell Hall, was more popular in its day than either of the other novels (though, curiously, suppressed by Charlotte after first publication) and has similar themes of dysfunctional male degeneracy, debauchery and domestic violence,  summed up sadly by stoic suffering heroine Helen Graham "If I had known him better at the beginning, perhaps I would not have loved him at all." Alison Farina adapted this one, teasing out a complex storyline for actors Madelaine Ryan and Tom Turner, directed by Shane Morgan. An impressive achievement all round. 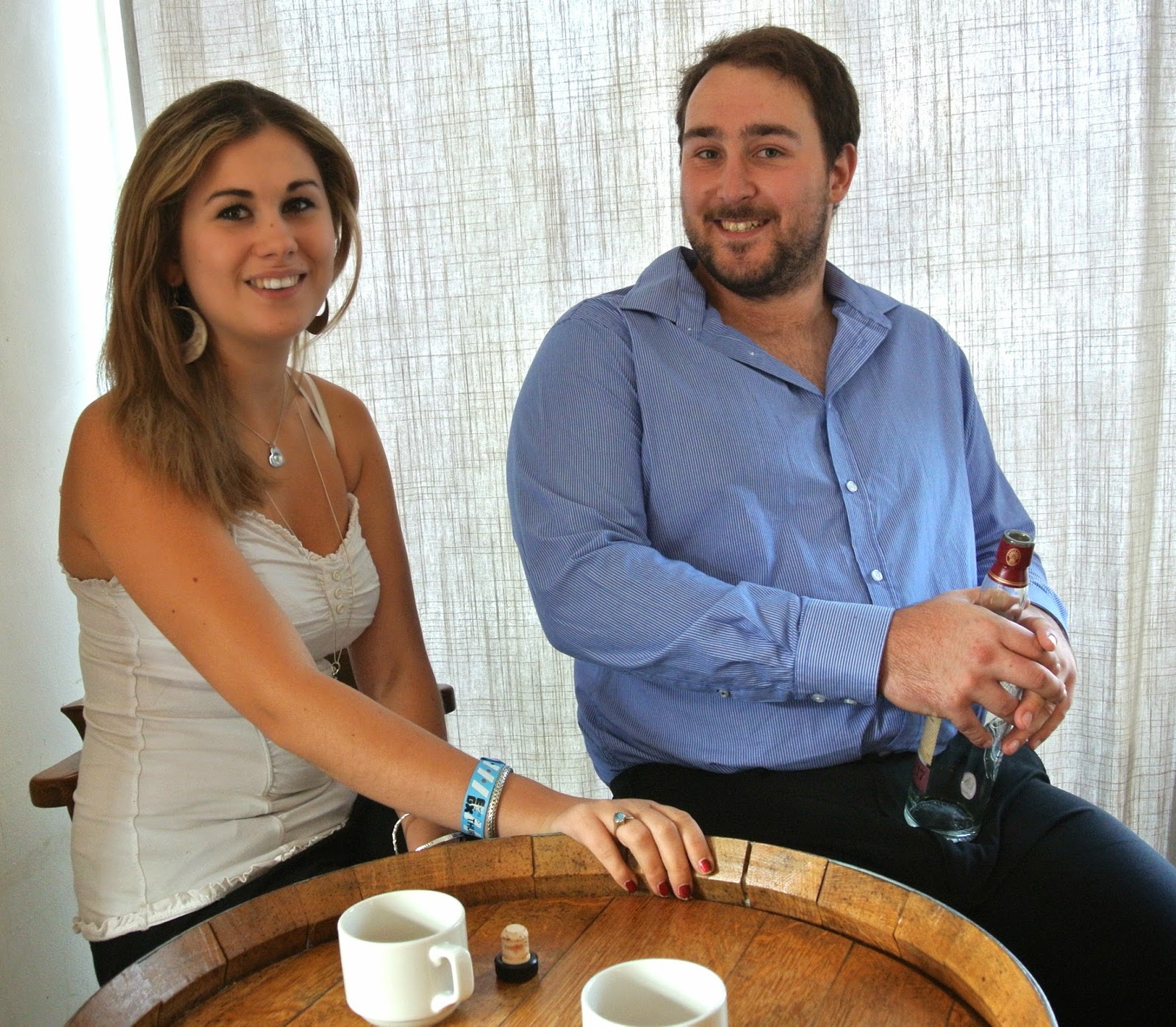 So October is nearly on us, with another autumn special: Salisbury Fringe where Rosie and I will premiere Crossed Wires, our new double-bill for Nevertheless Productions, on Sunday 5th at Boston Tea Party. Rosie's been rehearsing Champagne Charlotte in Salisbury while my actors for Muffin Man spent Sunday at the Cornerhouse, where the show will  run on Friday 10th & Saturday 11th. Ross Scott and Fleur Hanby Holmes are so fantastic in their roles my only worry is they may peak too soon... but they're consummate professionals, so that won't happen! For Frome, call 01373 472042, for Salisbury just show up.
Posted by Crysse at 5:54 PM No comments:

Back in the UK, wassup? 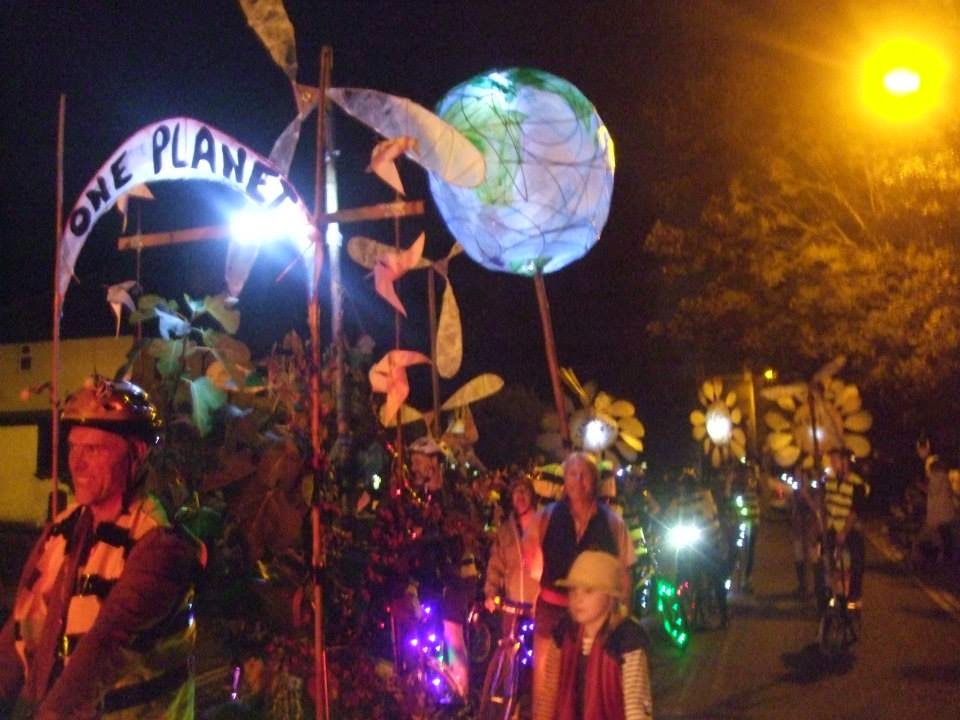 I generally aim to be home in Frome for Carnival, but I wouldn't have missed this last week at Cortijo Romero in the Alpujarras even for the glittering procession of bicycling bees, as I enjoyed such a fiesta of lucent creativity with the self-styled WRITE CLUB. Our sessions each morning and again at twilight produced high-standard pieces imaginative, moving, surprising, and sometimes hysterically funny... 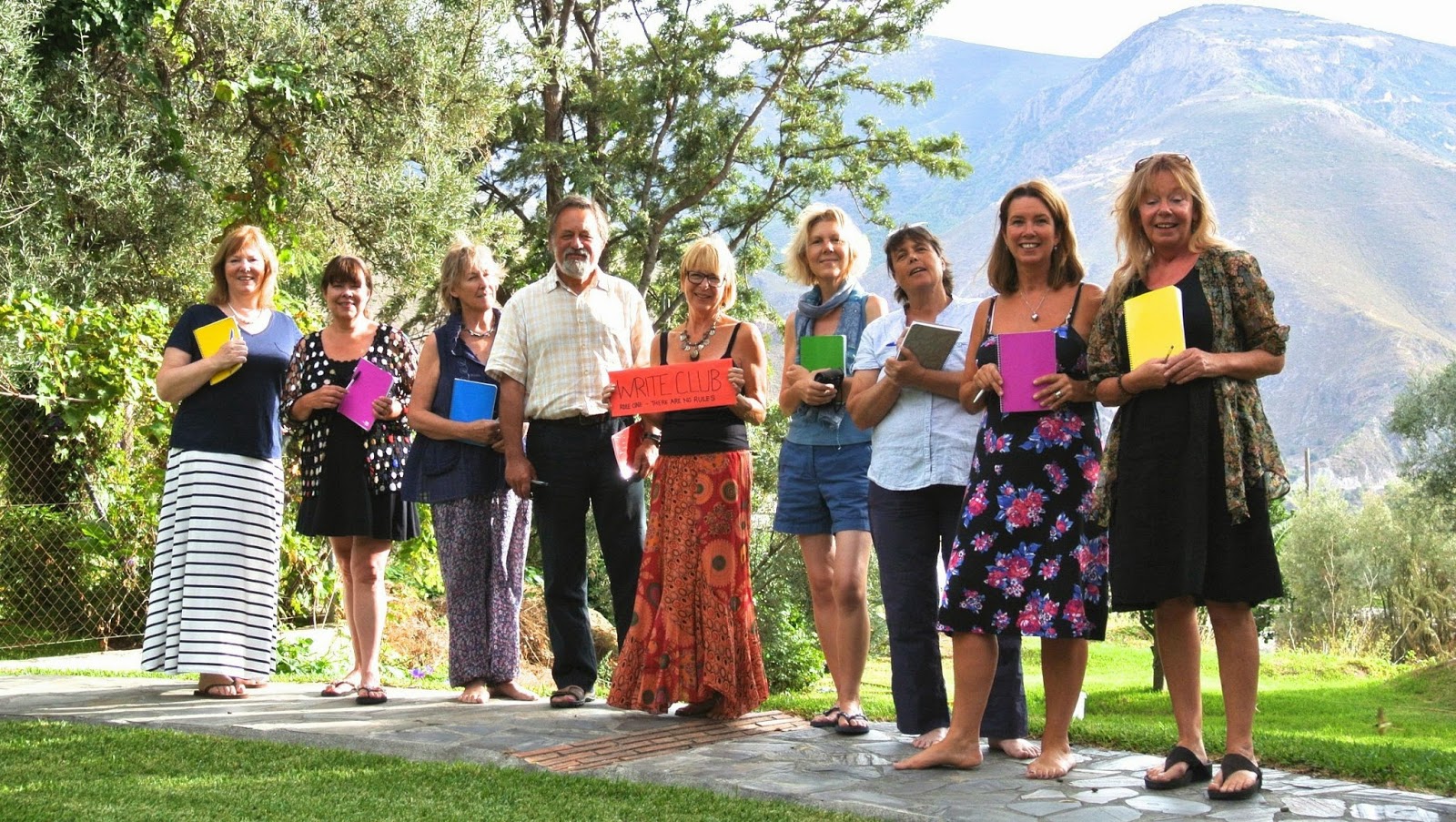 And between times, there's that beautiful garden to laze in, superb meals, dawn yoga & night dancing, and walks into town to practice our Spanish on charming barmen who with our wine brought platters of equally delicious tapas, charging an incomprehensibly small amount for these delights.

Two fantastic groups back to back feels like a perfect place to press pause on writing courses. After two decades of leading sessions in fabulous venues from Thailand to Chile, including Turkey, Tuscany, France, Spain, Crete, Kythira, Zakynthos and Skyros, I've been privileged to work with some unforgettably wonderful people and hear fresh-minted words ranging from moving and profound to frankly hilarious, constantly amazed at the power of the pen in these ten-minute impromptu pieces.  And now it feels like time to make a change, though I have no idea what that will be. Uncertainty is the fertile ground of creativity and freedom.... step into the unknown and you step into the field of all possibilities.

I heard that Deepak Chopra quote for the first time on Skyros this year and found it synchronicitously affirming of the severance I had already decided.  So my last post about teaching ends with an image from 1994, my very first course in Gümüşlük ~ or rather just after it, when we all went for a refreshing Turkish mud bath.  The good muck of life, giving endless renewal. Thanks a million, all of you, I've learned so much.

Back in the world Forster so aptly epitomised as a place of 'telegrams and anger' I'll avoid comment on the race to self-destruction between war-mongers and planet-abusers, and comment on a more modest literary issue: literary censorship.
"As a writer you have a choice to make – are you going to accept censorship or not?" was Hilary Mantel's response to the fury greeting her latest publication The Assassination of Margaret Thatcher.

It was hailed by the Guardian as 'unexpectedly funny' and by Maggie's former guru Timothy Bell with a call for a Police Investigation for 'bad taste.' As English PEN, which supports writers across the world penalised for free expression, points out: Lord Bell’s call for the police to investigate Mantel for writing a work of fiction is disproportionate and wholly inappropriate. It's also ironic, since Mantel's work is an imaginary fantasy about someone now dead, that the baron considers this a more appropriate target than distorting data about living people for personal financial gain, as he was found to be doing in 2011. Remember the Bell-Pottinger lobbying scandal three years ago? Just saying.

A bit more serious, I think, is the closure of Exhibit B, a performance designed to raise awareness of the ongoing history of racism. The show, which has already been shown in several European capitals and won 5 stars in Edinburgh, was due to run at the Barbican but a petition of protest from nearly 1500 people claims the content is racist. Only a tiny minority of those protesting will have seen this difficult piece, and I haven't so I don't know either, but I found the statements from the actors (all black) defending their work very convincing.  They met with the demonstrators to plead the integrity of the piece: "We find this piece to be a powerful tool in the fight against racism. Individually, we chose to do this piece because art impacts people on a deeper emotional level that can spark change." But shouting protesters won the day, which I wish was true for much bigger protests for peace and planetary protection, homes for homeless, or equity for the poor and dispossessed.
Anyway, less of all that, it's really good to be home among family and friends, with a new pub theatre production coming up at the Cornerhouse soon - October 10th & 11th are the diary dates to note. Further details after Sunday's rehearsals!
Posted by Crysse at 12:02 PM No comments:

Athens Sofitel lounge is usually a midway pause on the homeward journey from Skyros island, the double-ferry, triple-bus trip behind me and only the flight to London and onward train or bus journey southwestwards to go. This time I'm poised for another outward flight as soon as I get back to the UK as, for logistical reasons I won't bore you with, this is the only way I can get to Malaga in time for my next writing course. So in order to arrive fully focussed at the gorgeous venue of Cortijo Romero, I'm checking in with my final posting on the fabulous Atsitsa Bay venue en route, while Greek memories and mosquito bites are both still vivid.
So many high spots, like the nine mile walk to Skyros town with its labyrinth of narrow cobbled lanes with its authentic local nightlife in the bars & tavernas and long beach below the jutting crag covered with sugar-lump buildings, a sickle of sand stretching from the gaudy little harbour right round to Dimitri’s ouzo bar where you can watch the southern rocks darken into violet at dusk. About midway is Juicy Bar, 14 years ago when I first came here the only beach bar with loungers and reed parasols and still a favourite place for mellow music and smoothies and shade.

Back at the camp the tempo changes again as like Prospero’s isle Atisitsa is full of strange noises: massive drumrolls of thunder & battering downpours that seep into our bamboo huts and turn the red earth paths into muddy moats, and later the swooshing of floods swept from the Magic Circle for Kym Suttle's unmissably fantastic early morning yoga. And there’s music everywhere, Susie’s choir, the ad-hoc guitar-&-keyboard band, Kym’s dance music, discos in the bar and songs around the site. Saturday night resonated to the chords of Richard Wagner at the Greek premiere of Julian Doyle’s movie Twilight of the Gods, an examination of the composer’s quarrel with his erstwhile friend Frederick Nietzsche which lasted until his death, after which the philosopher went “brilliantly and ferociously mad” to quote one of his last utterances before becoming catatonic.

A week of fascinating evening activities, great food, and a daily saunter down to "20-minute Taverna" for an afternoon swim on the sandy beach there, but for me the main event was the morning and twilight writing workshops held under the pine trees of Marianna's cliff top bar: mutually supportive writers sharing some stunning pieces of work, a real privilege to know you all.

Posted by Crysse at 3:25 PM No comments: 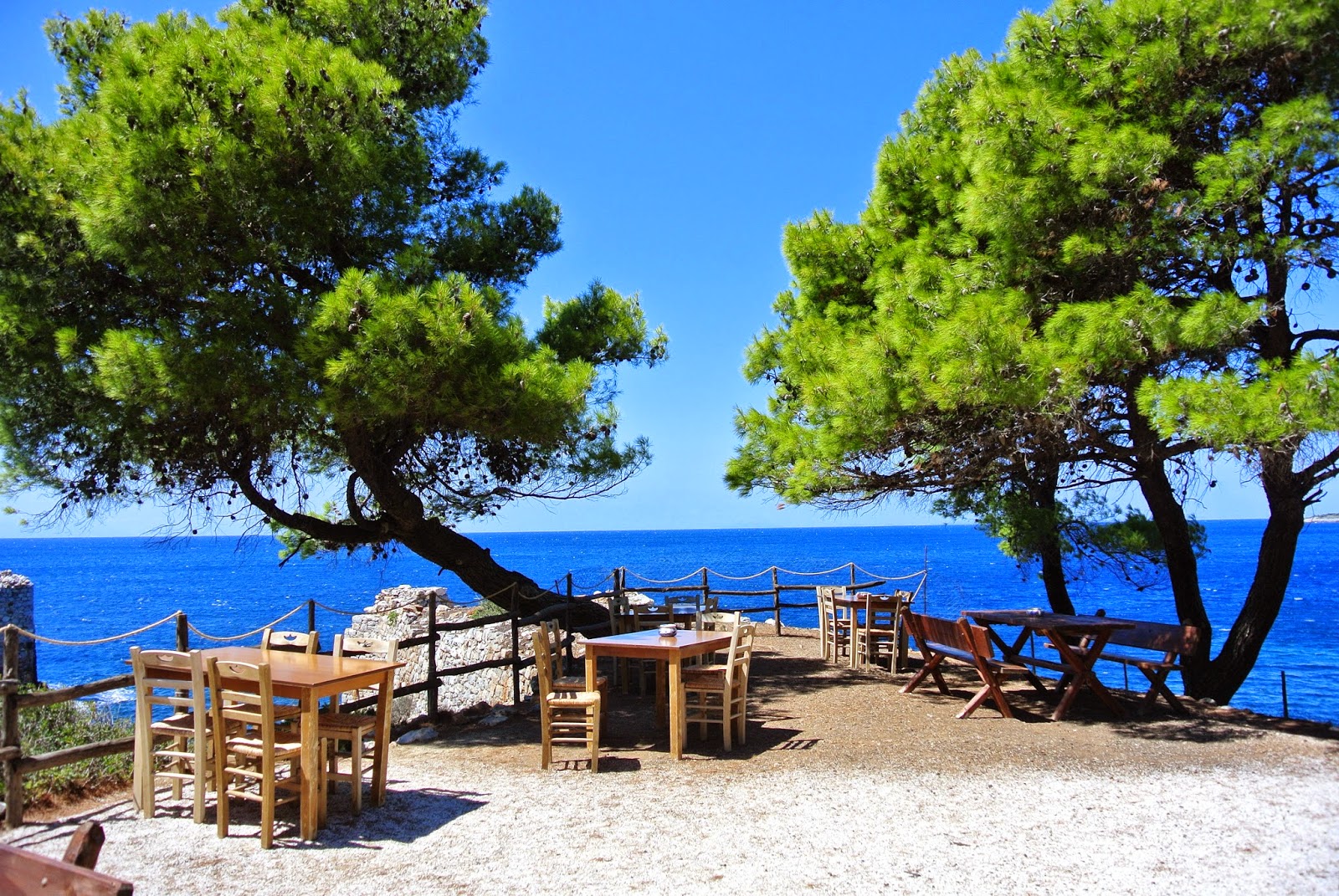 The weekend starts Thursday lunchtime for Skyros courses in Atsitsa so with no evening group tonight I hiked along the coast road to twenty-minute Taverna (misnamed unless you have wheels btw) where below the massive pine tree in the 'Cocktail Bar' there's wifi as well as solid sunshine. It's been quite a week. Since the 2-day journey to arrive here I've led eight workshops with thirteen writers sharing pieces moving, amusing, surprising & delightful, all of them at Marianna's cafe, a venue of almost unsurpassable beauty and constant inspiration.
I was going to say more, about evenings of dancing, a starry walk to the chapel for a melos (impromptu sharing of poetry and song), watching geckos darting through the pine-shadows, fantastic yoga sessions, bamboo huts, camaraderie, and breakfasts, but signal at this charming beach bar is fragile so I'll leave all that till tomorrow, when we walk nine miles across the island to Skyros town.
Posted by Crysse at 2:38 PM No comments: