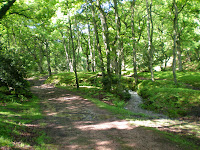 You'd think, wouldn't you, that May would be the ideal time to plan a group walk on the Quantocks and Exmoor in the footsteps of Coleridge from Nether Stowey to Porlock... except that incessant rain had flooded most of Somerset, with callouts to the emergency services coming at 3 per second. We forded several roads on our route-planning tour, and found the wooded footpaths marked on the OS map as alongside streams had readjusted the preposition and were now within them. Relief to return to the Castle of Comfort, ironically so named when the 1600s miners' cider house; a coffee-house by the time Coleridge and Wordsworth met there, and now a rather posh guest house.

Our room had sherry and a library, where we discovered the Diary of William Holland, vicar of Over Stowey, and gems like this:
"October 23rd 1799. Went with my wife to Stowey and bought a gown of Mr Frank Poole who smiled and bowed graciously. Saw that Democratic hoyden Mrs Coleridge who looked so like a frisky girl, or something worse, that I was not surprised a Democratic Libertine should choose her for a wife." Coleridge would have been 27, married to Sarah Flicker and recently moved from Devon to Bristol, where he lectured at Unitarian chapels and wrote anti-war poems. The Lyrical Ballads had just been published. Kubla Khan and opium addiction came later.

Bath Fringe has so much exciting looking stuff I wish I could get to see more of it. Like all festivals, there's a buzz from just walking around the town on a warm night with audiences spilling out from every kind of event from classic to chaotic. My Friday choice was "A Bath with Bladud" presented by Touch & Go. No script, no repeats, promised the flyer. "An alchemy of movement and sound and more" promised Michael at the start. "It may not be the story you know" he added, usefully. There were places where this tale of the leper King with a fascination for flight seemed not to be a story even the performers knew, as ancient Greece slewed into a place of flamenco and cornetto accents, and Bladud's descent to the Underworld appeared to take him into a bar in Aberdeen. Bizarre impro explorations only added to the audience's enjoyment, and sense of privilege at sharing something ephemeral and courageous, with the themes - aspirations, choices, flight, fatherhood - powerfully shown.
Posted by Crysse at 2:30 PM No comments:

Email ThisBlogThis!Share to TwitterShare to FacebookShare to Pinterest
Labels: Coleridge, Touch And Go 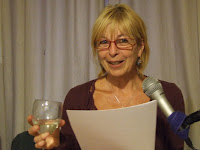 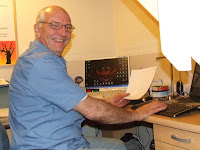 Back home, the Merlin is aglow from their panto success in the Somerset Fellowship of Drama Awards, and the Frome Festival countdown has begun. Mike's already on the next round of recordings for Frome FM. Very civilised it is too, with supper and wine. 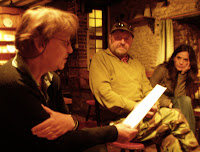 Then on Tuesday I was in Bruton to MC the Festival of Arts Poetry Slam. 'Venue T.B.A" is never a good look on a poster, so full marks to those who discovered us in the Blue Ball Hotel and shared a quirky but enjoyable event, swelled by unexpected interest from the public bar.

Poets are not always so appreciated. Philip Larkin is kicking up a kerfuffle in Frome. His most famous verses, identified in the front-page 'Outrage!' story in our local paper as "containing the F word in 2 out of 3 stanzas", have been carved on a slab as part of an art installation near a graveyard. Perhaps the Wesley Church congregation fear that mourners may find little comfort in Larkin's morose philosophy of human relations. I'd have thought it would be quite consoling to reflect on the shared inevitability of reciprocal fuck-up. Artist Cornelia Parker says bravely: "Frome has a long history of non-conformism and I hope that continues." Amen.

Footnote to the Larkin story: Emily reminds me of a cosier alternative from Adrian Mitchell: 'They tuck you up, your mum and dad...'
..
Posted by Crysse at 1:48 AM No comments: 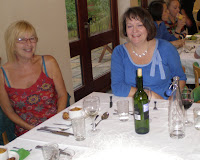 After the simmering blues and sizzling golds of Greece, I've returned to the duchess greens and Queen-of-the-May whites of quintessential English countryside.
I'm still functioning in greek time when I set off to Farncombe Estate, a venue in a jewel of a valley in the Cotswolds and seething with students singing motown, rag-rugging, chinese brush-stroking, examining Tudor history and - in my room - exploring their creativity in writing. Despite my residual ripples of hellenic withdrawal, it's a really great session with a dream group: enthusiastic, mutually supportive, and with wonderfully varied voices. They sop up suggestions and stimuli like thirsty navvies and the weekend whizzes by.

Town news footnote: Frome Festival brochure is now out, with most of the literary events bookable. And my piece on Hunting Raven bookshop is in the current edition of Penpusher magazine. 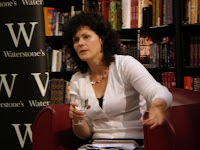 "You have to know where you're heading and that exciting things will happen, but you have to discover them along the way," is Sarah Duncan's reply when asked how far she plans in advance: "The only time I ever sat down to plot a novel, I couldn't be bothered to finish it - or even start it."
It's the paperback launch of 'Another Woman's Husband' at Waterstones in Bath, and Sarah's giving How To Write A Best-Seller tips with a combination of helpful practicality and disarming modesty. Sarah is passionate that storytelling is more important than style, and if that means academic affectation I agree. But to me style IS story-telling; for writers, as for standup comics, it's not the events that matter, it's the way you tell 'em.
Posted by Crysse at 10:36 PM No comments:

The third week...
and we'd become such lotus eaters it might have been impossible to leave Paxos without the lure of the seaplane which whisked us off to Corfu at sunrise. 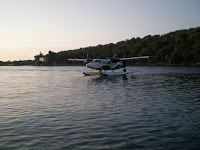 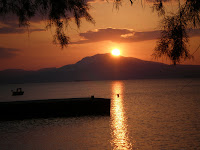 By sunset we're on Salamina island, after travelling by plane, car, and finally ferry across Thermopolae Straits, where the tiny Athenian fleet saved the City States from Persian invasion in 490BC. We're searching for the legendary cave of Euripedes, unknown even to the Rough Guide, for the setting of Steve's next play - which we heard last week has been shortlisted for production by Theatre West, so that adds zest to the quest.

Salamina isn't that big but the population's more than 10 times that of Paxos, and it's totally untouristified. So there's no concessions to non-greek linguists, not even the road signs, and our explorations need much ingenuity, many pidgin pleasantries, and Steve's knowledge of Russian (their alphabet is similar, apparently) before we reach Euripedes Kanteen, a friendly little bar on a hillside above the tiny bay of Peristeria. 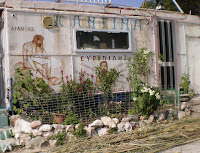 A steep clamber led us to discover... excavations of an ancient marble tomb, and a giant wild tortoise.


Time to move on to Delphi, where this often under-appreciated Greek dramatist would have seen his plays in performance at the amphitheatre beside oracle.

As befits a Greek odyssey, we had varied adventures before reaching Athens airport again, so I'm just going to post a few extra images from a place I still feel I'm wandering...

- morning view from our rooms in Krisso, near Delphi 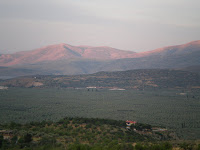 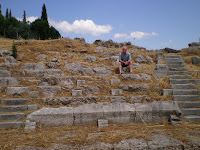 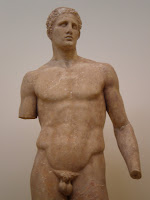 - American visionary Eva Sikelianus, who revived the tradition of amphitheatre drama in Greece in 1927 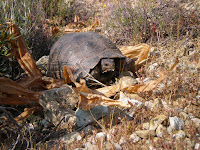 Posted by Crysse at 8:56 AM No comments:

The second week here... and we decided not to start thinking about our final week in Greece until our stay in Paxos was nearly over, until we suddenly realised this drizzled- honey time of late patio breakfasts, strolls above cerulean seas, and easy evenings with new friends, is actually scudding past with scary speed, and our flower-filled days and firefly nights will soon be over. So we're going to extend our stay on the island for five more days… 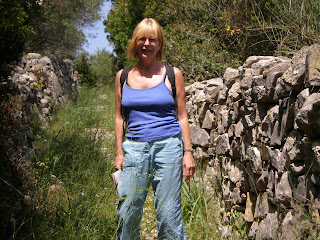 I’m confident now I know the island paths, and stride off with the map, up past olive grove hill and donkey Hote (we feed her apples) to Ozias with the little bar that’s never open – which is open - and after a while Steve says
“Look! The sea!”
And I say “Yes! Isn’t it beautifu!”
“But it’s on our right!”
“Oh! It should be on our left!”
“Well it isn’t!”
And we’re lost for 4 hours on the hilltops of Paxos, above rock falls and mysterious cerulean sea inlets, until we finally arrive back at the bar that’s never open and it’s closed, so we go home for a Mythos on the patio. 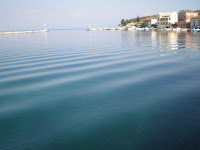 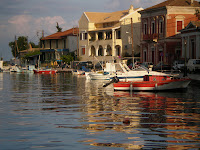 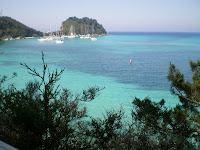 As I've been rhapsodising about these cerulean waters, I should be honest and admit there’s the usual Greek scribble of wires across every vista, with villas plonked like trout-pout lips on the coastal face at every turn. The beaches here despite the beauty of the bone-white stones, are the dirtiest I’ve ever seen - the Germans didn’t need to waste ammunition when they invaded, they could have dropped the skiploads of plastic bottles that litter the island today and despoiled it just as thoroughly.
One of my poems about the frustrating and beautiful enigma of Greece ends:
"Greek islands are like that.
Tainted enigmas, sainted sluts,
Smells of jasmine and lust."

But my guess is, as Paxiots are nothing if not sensible to tourism, those beaches will be cleaned up by the time the season begins officially next week.
As Dionysis told us tonight at Anesis (“laid back”) bar: they are no more than 60% ready yet. Why, there’s still one day to go before the season starts!
..
Posted by Crysse at 12:08 AM No comments: