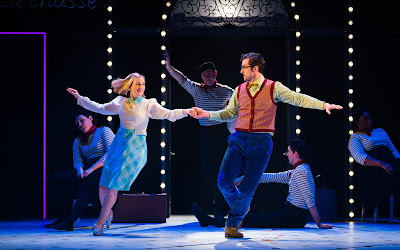 If you adored Amélie and love chocolate, you will be completely besotted by Wise Children and Plush Theatricals' Romantics Anonymous, the delightful musical love story of a shy chocolate creator and her gauche chocolatier boss, now playing to enraptured audiences at Bristol Old Vic. It's an Emma Rice production so there's copious electric lighting to designate scene changes throughout this sweet story, wittily narrated by a brilliant ensemble cast featuring Carly Bawden and Marc Antolin. Highly recommended if you can get a ticket before February1st - there was a full house standing ovation when I saw it, so you may have to kill. Image: Steve Tanner 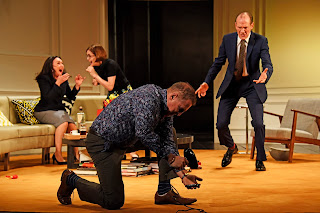 Marital discord and middle-class mores have always been considered fair targets for drama, and Yasmina Reza goes for the jugular in The God of Carnage, a play about the savage antagonisms simmering below the civilised veneer of two married couples who meet to discuss a playground fight between their respective sons. If that doesn't sound much like a comedy, it's because it isn't really one, although we are invited to laugh at the bourgeois-style assaults: Christopher Hampton, who translated the script from French for this production at Theatre Royal Bath, reports that the playwright fears humour will make her work too entertaining to be taken seriously. Yet there is humour, of a very bitter kind, in this tale of escalating friction as both mismatched couples are confronted with their own unresolved differences as well as the antagonism of their opponents. It's very well acted, especially by the men, Nigel Lindsay and Alan Paisley Day, whose roles give them more light and shade to work with than do the women's (Elizabeth McGovern and Samantha Spiro, who's impressive at projectile vomiting). Lindsay Posner directed and the set, featuring a symbolic spear-ball above blank walls, was designed by Peter McKintosh. Image: Nobby Clark 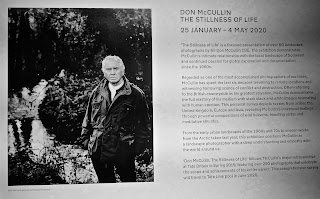 Moving on to art: Hauser & Wirth do openings in style, on Thursday celebrating Don McCullin's superb exhibition in a party atmosphere with live music and fires in their lavish garden. The stillness of life comprises mainly Somerset scenes: the photographer himself, who lives locally, was at the gallery with friends. He was known at one time for  images conflict, and these stark landscapes seem to me to have a resonance of restless energy, even when unpeopled. His work is brilliant. 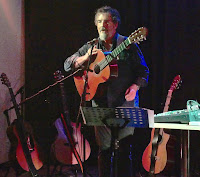 Keith James at this week's Grain Bar Roots Session brought a small team of guitars to supplement his solo performance, playing profound songs for deep winter days: existential reflection from Leonard Cohn, protest from Bob Dylan, poignancy from Joan Baez some of Lorca's dark poetic words and, more than ever a song for our times, Joni Mitchell's 1970 anthem for Woodstock: We are stardust - we are golden - and we've got to get ourselves back to the garden...
Frome's lavish habit of providing an embarrassment of riches most weekends sadly meant passing on the The MellowTones, a new band already with a hot reputation, to join in with the dancing at the Cornerhouse where Tempting Providence provided a lively selection of classic rock, including a fabulous mash-up of Wicked Game with White Wedding and a breath-taking version of Wagon Wheel that raised cheers. Here's the team: Paul Kirtley, David Goodman, and Colin Ashley, with Peter Barnes and Nicki Mascall- icing on the cake provided by popular bar managers Tom and Amy's classy jive! 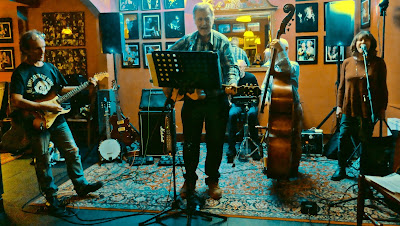 Posted by Crysse at 4:36 PM No comments: 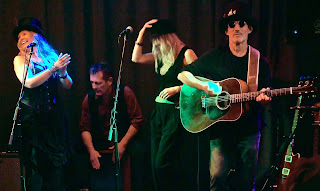 In contrast to last week's rather quieter report, this bulletin seems to be obsessed mainly with music - live, local, and exhilarating! 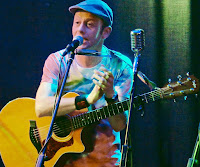 Roots Sessions at the Grain Bar on Wednesday featured solo singer-songwriter Leander Morales, and six-piece band The Hoodoos, with both acts enjoying appreciation for their intimate audience interaction as well as splendid performances. Hoodoos do a particular good version of the 1973 hit 'Long Train Running' which really suits their hi-energy impact style. 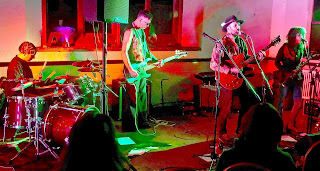 The 4-piece band has a mellow mood reminiscent (for me) of the seventies: I loved the repeated chant ... at the end of the night, the moon fades away and the sun comes up in the sky..... In contrast, Jaz is best known as front man for Tankus the Henge, which is a popular festival dance band.

Another mood change on Saturday for the Frome Punk Festival, an eight-hour fiesta, for anyone staying throughout, of punk bands classic and contemporary on the main stage of the Cheese and Grain. 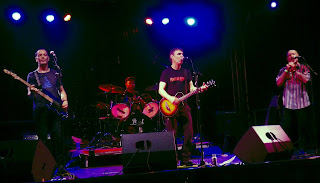 The main attraction for me was The Raggedy Men who always deliver a brilliant performance and get people up and dancing too. Also very good, though earplugs recommended, were The Lonely Goats who perform their own songs -you can check out Elvis on Mars here. 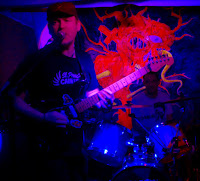 Saturday's stirring music continued till late not only in Frome but also down the road in Bruton where mutant new wave / post-punk trio Invisible Eyes were featured guest at the Bruton Castle open mic night - you can listen to a sample here.
Sunday also provided an afternoon of excellent live music at The Three Swans as Paul Kirtley's acoustic club provided its usual mix of folk, rock & jazzy pop, though sadly there are no images for this as your reporter had to default due to another winter ailment.. sigh. 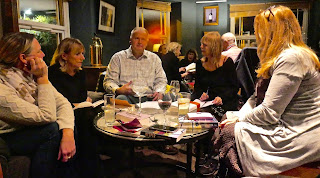 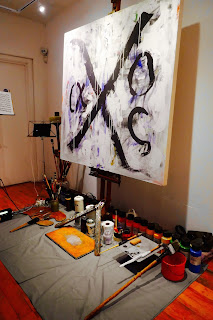 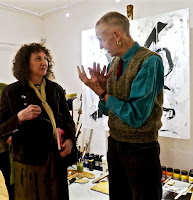 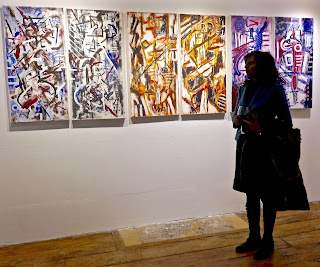 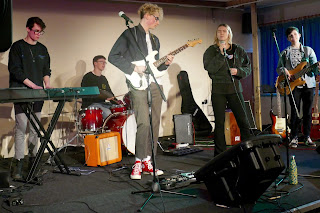 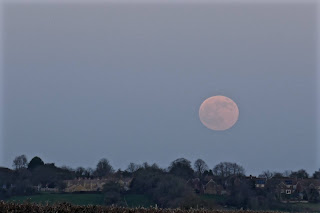 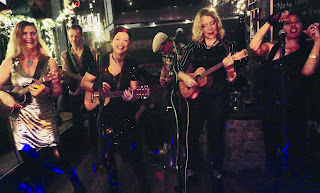 The eighth day in the carol is ladies dancing though I never remember where you start counting from, but the highlight of an absolutely brilliant gig at the Old Bath Arms from Back of the Bus was The Eighth Day The link here is to Hazel O'Connor's version, but it gives some idea of the impact from this amazing hi-impact septet. All of us in Frome are so lucky to move into the difficult year ahead in an egalitarian town that bubbles with live music!

And now after a week of those traditional seasonal celebrations of eating, drinking, walking, dancing, quizzing, and sneezing, it's time to start on another year, still box-fresh and unsullied - let's see if we can keep it that way. To finish the old one and start the new, here's a story and a poem. 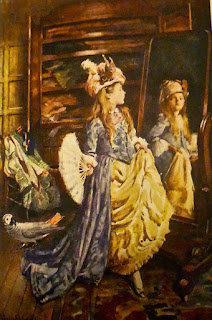 Of the four sisters in Louisa M Alcott's tale, tomboyish Jo seems most favoured, with practical Meg in second place while Beth is clearly far too angelic to survive and Amy is selfish and vain - but as the reader is invited to disapprove of her, she's the closest to an unloved little girl so I preferred her to Jo who was too much like Worrals (the female version of Biggles). Jo in the movie doesn't come across like that although she does literally rewrite the book, 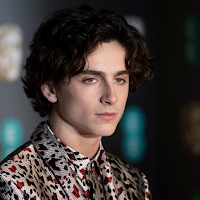 and it's all visually entertaining with some excellent acting (especially Meryl Streep) and a charming Laurie, although the girls all seem a bit hefty for their ages & era and the time-jumps are a bit confusing. It's been criticised for focusing on the lives of white characters but that's what most girls' books in the 19th century were like, and at least we had the eye-candy of all those pastel puffed-up skirts at the parties like massed macaroons. Nostalgia encouraged me to revisit my mother's copy of the story dated 1917 and published by the Religious Tract Society of London who appear to have economised on their cloth covers as the binding is in shreds: the colour plates by Harold Copping are still glowing though so here's Amy from this book, being vain, and Timothée Chalamet as Laurie in the movie, being the fairest of them all.

So here's hoping your 2020 will impossibly good, and some helpful words from Brendan Kennelly. 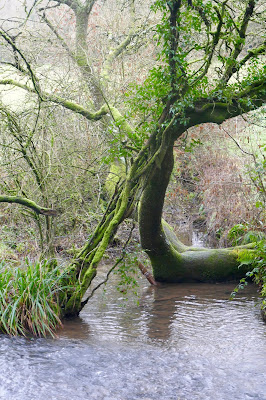 Begin:
Begin again to the summoning birds
to the sight of the light at the window,
begin to the roar of morning traffic
all along Pembroke Road.
Every beginning is a promise
born in light and dying in dark
determination and exaltation of springtime
flowering the way to work.
Begin to the pageant of queuing girls
the arrogant loneliness of swans in the canal
bridges linking the past and future
old friends passing though with us still.
Begin to the loneliness that cannot end
since it perhaps is what makes us begin,
begin to wonder at unknown faces
at crying birds in the sudden rain
at branches stark in the willing sunlight
at seagulls foraging for bread
at couples sharing a sunny secret
alone together while making good.
Though we live in a world that dreams of ending
that always seems about to give in
something that will not acknowledge conclusion
insists that we forever begin.
Posted by Crysse at 2:48 PM No comments: