Nostalgic for sun? Autumn's in with words & music 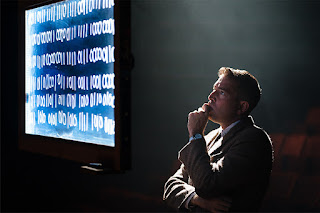 Breaking the Code could apply to defying the moral & social mores of the era, or it could mean cracking the famous Enigma Code through genius & ingenious brainwork. In Hugh Whitemore's play about Alan Turing, it's both. A play about a mathematician working in WWII era didn't initially sound very enticing, but this is a totally gripping story, intriguing, moving, and provocative, as his life is presented in shifting sequence to decode the mind of the man who wanted to make a machine that could think and feel.

The Wiltshire Creative Production at Salisbury Playhouse is brilliantly directed by Christian Durham, creatively using James Button's in-the-round set and with a strong cast led superlatively by Edward Bennett as the eccentric homosexual genius. He's rarely off-stage as the key moments in his life unfold - pre-war, post-war, and as a wartime code-breaker - yet every thought he utters seems unplanned and newly thought, an outstanding talent for any actor. The rest of the cast are all excellent in their largely walk-on roles into his complex and isolated world, with rent boy Ron (Joey Phillips) and old-school cop Mick (Ian Redford) especially impressive.  On until 26th October - massively recommended. 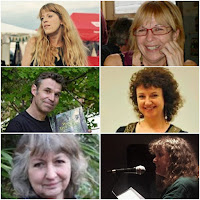 Sizeable swathes of Frome folk have been in London this week, many wielding musical instruments and / or in costume performing in the serious street-theatre that involves us all.  Green Platter at the Merlin on Thursday aimed to create an affirmative & empathetic context for climate protest, with poetry and spoken word.  With Rose Flint launching her stunning prize-winning eco-poetry collection Mapping the Borders, plus readings from Deborah Harvey and Dawn Gorman who both also write powerfully about the beauty of natural landscape and its frailty, and with Liv Torc who is, to quote Deborah, a force of nature in herself, performing her internet-sensation poem The Human Emergency, the poetry we heard throughout was simply fabulous, and Julian Hight, Frome's specialist in woodland and all things arboreal, concluded the event with an illustrated insight into the ancient forests of our land. One of the best spoken word events I've ever hosted.  Thanks David Goodman for these the images of the event.. 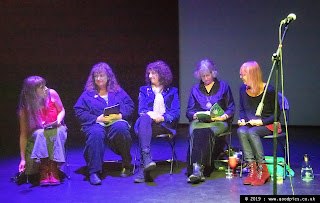 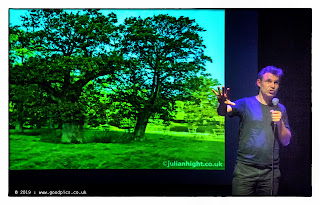 And then weekend was awash with live music. Saturday evening saw Back Before Breakfast at the Cornerhouse, and The Sun totally rammed from wall to bar counter with jigging fans of the fantastic Raggedy Men, who seem to exceed their own record for high-energy impact in every show.

Sunday was Nunney Acoustic Cafe, with a full afternoon of live music from bands, duets, and solo artists, with popular regular performers joined by talented guests, two from the Czech Repubic. The "almost-too-talented-to-be-real" Hoodoos - to quote the organisers - were headlining with eleven 3-song support spots, mostly with a folksy feel but lots of variety and originality. 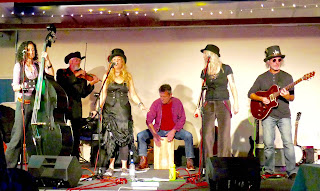 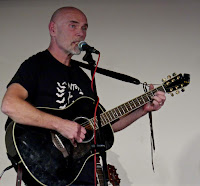 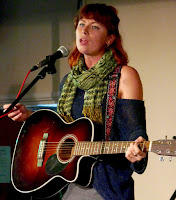 Here's the nearly-unreal Hoodoos, and some more special moments: Francis Hayden singing - we hope auspiciously -Dylan's Times they are a'changing, Dave Clark's version of Tom Waits Tango Till They're Sore and, among the original songs, a welcome return by Emma Shoosmith, Paul Kirtley singing with David Goodman & Colin Ashley, and shamingly-English-fluent Czech Tom Oakland... I could go on commending but they're all on my facebook page. 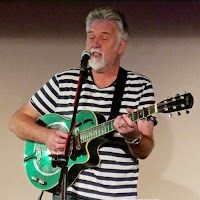 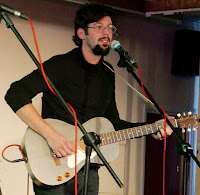 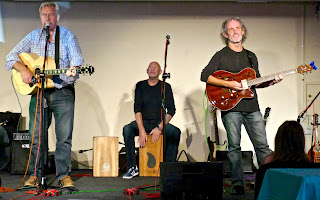 And now autumn's properly here, berries are withering and nuts are falling into the lakelike puddles, time to get ready for whatever the oncoming months will bring... marching boots for many of us.
Posted by Crysse at 11:57 AM