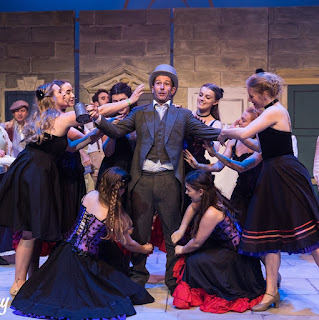 Merlin Theatre Productions always reach an extraordinarily high standard for amateur performances, especially those involving a wide age range, and My Fair Lady this week was not only a visually exciting all-singing-&-dancing delight but also offered an interesting & empathetic interpretation of key relationships. Daisy Mercedes' direction, with its focus on 'chemistry' in the relationships - and, crucially,  the shift of the ex-flower-girl's ecstatic song 'I could have danced all night' to relate to her breakthrough in elocution - creates an Eliza with two fathers, the feckless Doolittle (superbly played by Graeme Barry) and the fierce linguist professor, bringing a whole new dynamic and tension to their relationship. 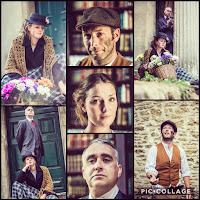 This high-energy show never flagged, and Act 2 reached a brilliant crescendo in the emotional tension of script, plus also the best ensemble highlight in Doolittle's show-stopping lament 'I'm getting married in the morning' - congratulations to band and costumes too, here. A very strong cast led by Richard Pugh's dyspeptic Higgins and Daisy Weir's determined Eliza. Thanks Chris Bailey for making these great publicity pictures available.

Now to another fable - Cyrano do Bergerac.
It’s a story so extreme Mills & Boon would baulk: a man who loves so deeply that he sacrifices his own longing in order to unite his beloved with the man she prefers, wooing her with an articulate passion his rival could never possess, and carrying that secret until the day he dies. And the part is written nearly entirely in rhyming verse, which really does require the calibre of Tristan Sturrock, the actor who in a 2012 production of Peter Pan managed to make it charming and not-creepy-at-all that a middle-aged man should climb through a little girl’s bedroom window and abduct her - he is always mesmeric even with a false nose the size of a turnip. 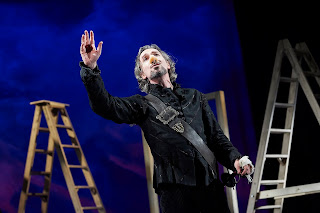 Cyrano is Bristol Old Vic’s autumn production, directed by Tom Morris, with a cast of five men and two women in roles ranging from nuns to soldiers, and with their trademark live onstage music. There’s some initial jostling of within the auditorium and at one point we're urged to join them in song, but then the action settles into consistent narrative and becomes clearer. Programme notes explain the theme as quintessential theatre - a tale of pretending, and what happens when you ‘pretend your way into the most beautiful love story you can dream of.’ But these are boys, so it’s a war story too, and perhaps more interestingly, a story of low self-esteem, as despite his lyricism and swordsmanship - displayed superbly - Cyrano's sense of self-worth can't get past his nose.

There are some touching moments, like the Black-Adder-finale-recalling war scene, and some amusing ones, like the Romeo-&-Juliet-balcony-evoking love scene when tongue-tied Christian parrots Cyrano’s lyrical words, but this kind of 'pure theatre' can seem at odds with the connection to its city's people that BOV has laudably pledged to prioritise, and it can seem a little bit whimsical and irrelevant. Unless you're a bearded nun, in which case you'll feel right at home. Images: Geraint Lewis 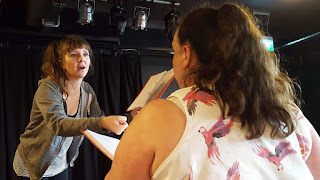 Also at Bristol Old Vic, up in Cooper's Loft, drama from a very different era: Everyone is Dead is set in a dystopian near-future where even the rain is toxic and Mad Max style gangs roam the land while non-specified enemies are bombing relentlessly.  Rosie Finnegan & I are interested in quirky small productions and this one further intrigued as it won the recent Theatre West competition for a play by a woman writer, with both actors also female. The drama itself is as feminine as  forest fire, though, with the two women taking refuge in a basement after a violent raid on the house. Intense hostility and emotional anguish is difficult to sustain for an hour but this is a thought-provoking play, well-interpreted by Florence Espeut-Nickless and Alison Fitzjohn as her father's one-night-stand, with impressive fight direction from Black Dog. 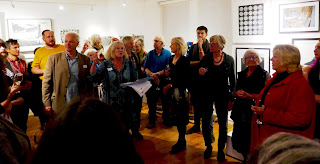 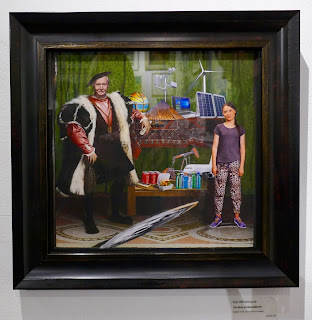 Back in Frome, Black Swan Arts have revealed the winners of their Open Arts Competition, always one of the most exciting exhibitions of the year as hundreds of entries are sifted to create the final exhibition - here's a glimpse of the opening night. Curated by Amanda Sheridon, this has been hailed as one of the best yet, and it's on till November 16.There's huge diversity of materials, forms, and concepts to appreciate but my 'public vote' goes to The New Ambassadors by Ros Whitehouse, as stuffed with symbolism as Holbein's original painting - and is it me or does that elongated skull (with a wisp of blond hair) look undeniably like Trump? I took a mirror along on my return visit, just to check.... 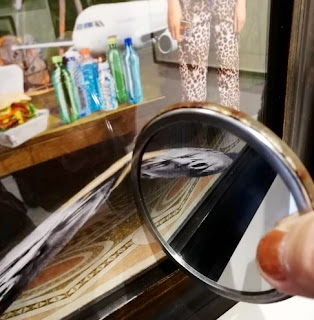 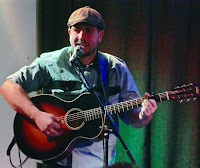 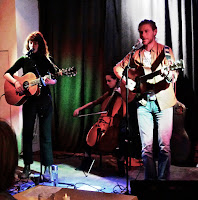 Music now, and Wednesday's Roots Session at the Grain Bar came from exciting 'rock-infused folk' duo Crooked Weather, with strong support from Josh Beddis. Next night's event, aptly titled Inspired & organised by Daniel Dobbie at Rye Bakery, provided a complete contrast:  Tallulah Rendall, rock-singer-turned-sound-therapist, with a mesmeric voice and presence - you can experience a sample here - with Peter Bearder, aka Pete the Temp, performance poet and generally off-the-wall entertainer with words and sounds. Here he is, treating us to strange sonic experiences like rapping in Latin and random loop effects, clad in an elegant evening dress and Ascot style straw hat. Both acts were superb, and the bean soup beforehand was good too. 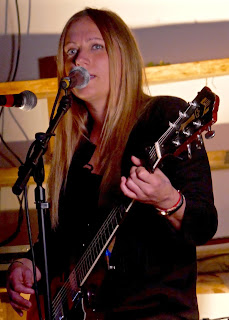 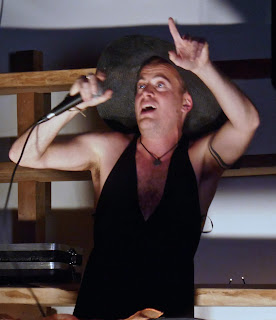 The rainy week ended dry and sporadically sunny for John Payne's Autumn Poetry Walk through the beech wood to Cranmore Tower, an extraordinarily lofty folly with amazing views across the Dorset hills. This was originally planned by John, with Martin Bax and myself, for last year, but illness interfered with that plan, so it was especially good to be all together again on Sunday. As well as leaves, and mushrooms, there were  masses of fallen nuts on our path, and one of our group was able to explain this crunchy carpet: 2019 has been a 'mast' year, when forest trees simultaneously flower excessively, leading to huge increase of fruit later. Mysterious, and fascinating! Thanks John for the picture of me & Martin at a reading stop. 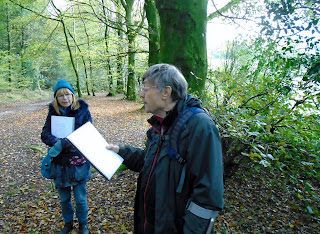