Wake me up when September ends 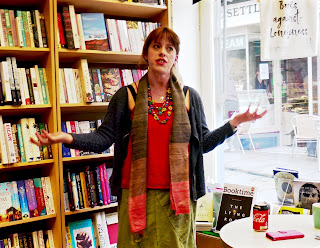 It was National Poetry Day last week and Liv Torc, chieftain queen of the Hip Yak Shack was commissioned by BBC Somerset Sound to create a poem celebrating 'home truths' about the county. Liv visited Hunting Raven Books on Saturday to share this and other poems - you can listen here, and she'll perform this, and her now-viral poem Human Emergency, at the Green Platter event next week - if that's not in your diaries, put it in now!  Poetry's annual day was also marked by a performance in the now-disused Shepton Mallet prison choreographed by Frome's Rosie Jackson - I missed this, but there's an excellent blog account here by Deborah Harvey, one of the poets. The all-male prison closed except for visits 2013 after four centuries of chequered history: I visited it regularly for a while to tutor one of the prisoners who had a yen to write a play and a social worker prepared to support him, and found all the Category C lifers remarkably pleasant. 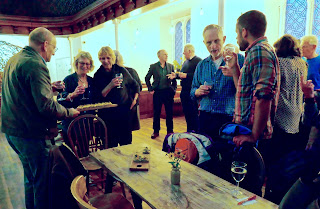 It's now five years since Flatpack Democracy - a guide to creating independent politics was published by eco-logic books as an account by Frome's IfF councillor & ex-Mayor Peter Macfadyen of the work behind establishing Independents for Frome, who took over the council and still hold it now. 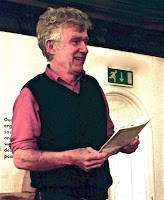 Flatpack Democracy 2.0 tells what happened next, which includes national and international connections formed in response to this template, and was launched last week at Rye Bakery (with nibbles and prosecco, Frome's pack isn't too flat for that.) Publisher Peter Andrews followed his role as barman with an intro to Peter Macfadyen's brief talk,which ended with a quiz for each table. Questions like Where was the term 'flat-packing' in this context coined?  (it was Amsterdam) and How many times has Frome's MP voted to reduce spending on welfare (it's 23, shockingly) generated much conversation at the tables, as independent councillors and candidates from Shepton, Bath and Wells had joined us for the event. For anyone interested in how communities function and thrive, Peter's sequel will be as invaluable as his first report, full of realism about group interactions and written with humour as well as the wisdom of experience. 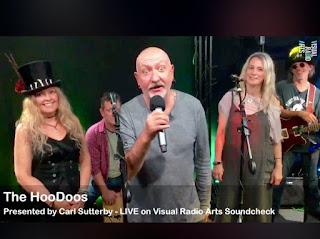 Despite this week being short for me - Spanish sunshine was still the view even on Wednesday - there's a lot of music to report.  Visual Radio Arts featured an hour of The Hoodoos, Frome's 'funky swampy' new sensation - you can watch it here, as VRA keeps an archive of all its shows - with Carl Sutterby stepping out of his Raggedy Man role to interview the band members: here he is talking to multi-talented David Goodman.

The Hoodoos  headlined at the Grain Bar Open Mic on Sunday too, in a crammed programme with a large attentive audience and, unusually for this venue, onstage lighting -welcome in theory but somewhat eyeball-challenging. 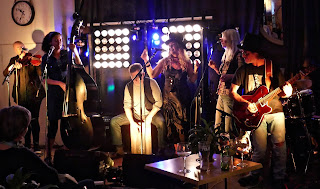 Ben Hardy-Phillips, who recently set up this monthly event, has extensive contacts so it was great to see musicians from Glastonbury and Bruton - and young talent like the fantastic foursome '1156'. 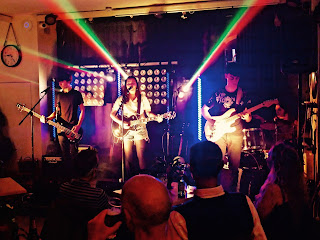 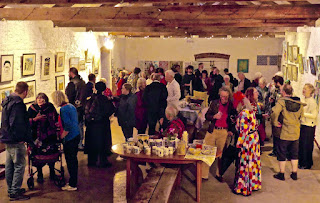 Visual art now, and a brilliant new exhibition: Art Interiors: Garden & Home by Steven Jenkins and Jenny Raggett opened on Friday in a party atmosphere at the Silk Mill, a perfect location to display these beautiful ceramics and fabric items as well as wall art - all available to view and buy until 16th October, well worth a visit.

Also a visual treat, here's a glimpse of Patrick Dunn's 'Banco de Gaia' visuals at the Loft on Friday night - perfect for multi-sensational dancing as September ends and there's another Independent Market, where Frome's Red Rebels walk silently through the crowds to remind us that climate change protest is escalating as the new month begins. 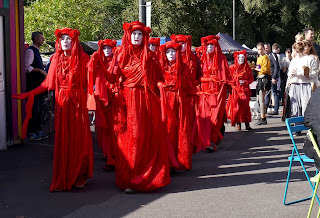