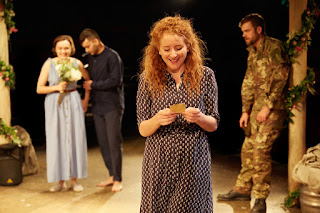 Let's begin with Shakespeare at the Tobacco Factory and Much Ado About Nothing - actually much ado about quite a lot, as the plot centres on trickery from trivial to utterly evil, and the happy-ending bounce-back wouldn't convince most marriage guidance counsellors. But it's considered one of the bard's best comedies, and this is a terrific production with fabulous visuals, unflagging energy and brilliant actors. The young couples are both delightful, and the parents of sweet victimised Hero, Christopher Bianchi and Alice Barclay, are mesmeric throughout. Designer Jean Chan's costumes and set decoration are splendid - I loved the fancy-dress celebration where Benedick is spurned by Beatrice while dressed as a ninja turtle - and the modern setting allows for masses of fun trivia, as well as (mis)use of mobile phones. 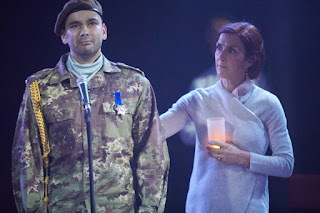 Elizabeth Freestone's direction is not only exciting but emphasises nuances in the plot which soften the brutality of Claudio's revenge as it seems his crush on Hero may have been fast-forwarded into wedlock by his controlling C.O, leaving him more vulnerable to Don Jon's faking her infidelity. My only reservation about the director's laudable decision to balance genders on-stage is that the least successful roles are the wicked sibling and the head constable who are both re-envisaged as women. It's partly the bard's fault that the scene when the Watch report their arrest to Leonato is a bit weak, as he often allocates lines of risible obtuseness to the 'mechanicals' in a way which while popular in his era tends to feel uncomfortable nowadays, but Dogberry's casting wasn't helpful here. But overall this is a terrific show and the three hours whizz by, so do go if you can make it to Bristol before 9th November.   Images (Mark Duet) show Beatrice falling for the happy trick that leads her to love, and Claudio facing the consequences of the unhappy trick that seems, for a while, to have destroyed his. 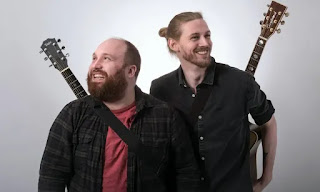 A different kind of stage comedy now, as Jonny and the Baptists brought their current touring show to Merlin Theatre on Friday - it's called, for one night only, Love Frome, Hate Bastards. The last time I saw this talented anarchistic duo was in Salisbury with Eat The Poor which was political agitation from start to finish, but this is a softer, more private-feelings-focussed product. There are a few minor assaults on church & state but the emphasis is now on their families and their own relationship. The Edinburgh reviewer gave this the thumbs-up on the grounds that "Men are not traditionally good at telling their best mates the affection they feel for them, so the emotional openness here is touching" but I like my satire razor-edged so although Jonny began and ended their set "You’re either against capitalism or you’re for the end of the world," for me it was disappointingly blunt in the middle.  I blame The Telegraph, which derided their 2014 anti-UKIP show for expressing concern that someone 'terrifying and dangerous' might end up in power. "Perhaps the country is sleepwalking towards Farage-o-geddon. I doubt it." wrote Dominic Cavendish disdainfully, a scepticism that apparently wounded Jonny as he quoted it on stage. I wish he'd found more resilience: there are enough songs already about babies and bromance. 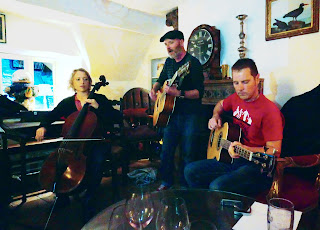 Music now: Newly founded by Paul Kirtley, the monthly Acoustic Club at Three Swans on Monday comprised a small but talented troupe of musicians including, as well as Paul himself, several impressive new acts - here's sensational trio Mountain Speaks Fire, performing Vin Callan's fabulous song February Fields. Saturday's highlight was a sensational set from Back of the Bus at the Cornerhouse - their version of Gotta Have Faith is fearsome - further enhanced by the full Raggedy talent line-up... Here's how Teenage Kicks looked in the atmospheric lighting - congratulations all (and apologies to the hidden cajon player.) 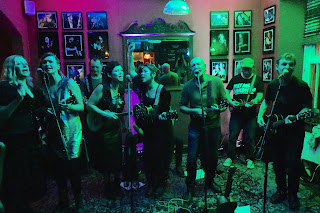 Email ThisBlogThis!Share to TwitterShare to FacebookShare to Pinterest
Labels: Acoustic Club, Back of the Bus, Cornerhouse, Jonny & the Baptists, Merlin Theatre, Much Ado About Nothing, Shakespeare at the Tobacco Factory, Three Swans