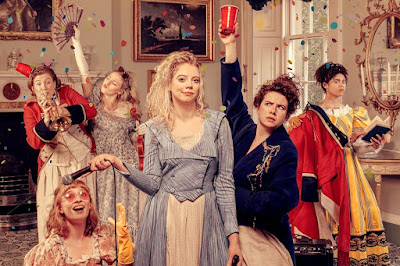 Let's start with a costume drama: Pride and Prejudice (Sort Of) is a refreshingly hilarious version of Jane Austen's most performed story presented by Bristol Old Vic with Royal Lyceum Theatre Edinburgh as a Trom Theatre Company & Blood of the Young production: Six energetic young women take on 21 key roles with entertaining indifference to plausibility, Lizzie's father being played with surprising conviction by an armchair, and there are frequent expletives and bursts of cheesey pop songs, with several nods to other classic productions, as when Darcy arrives home and his baffled servant comments 'You're very dry, sir...'  What's particularly good about this high-spirited, wickedly funny, version - apart from the costumes and the general absurdity - is the clear focus on the economic situation which was Jane Austen's real motivation in creating a household where the iniquitous laws of male inheritance would devastate the lives of six women, unless one of them at least could snare a man - but not silly Lydia's way, causing her mum to lament ‘who would touch any of you with a shitty stick now?'

There are so many moments of sheer delight created by this multi-roling cast it seems unfair to have a favourite, but Meghan Tyler's vulgar, outspoken, lovely Lizzie would be mine - here she is with wicked Wickham (Felixe Forde) at a moment of temptation. Isobel McArthur, also Mr Darcy, was the writer and Paul Brotherston directed. On in Bristol till 27 September before touring until spring 2020. 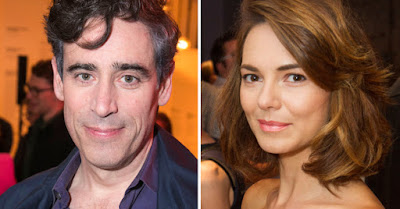 It takes a really special talent to range from witty impro chairing of  TV's HIGNFY to the sinister hitman in Pinter's The Birthday Party last year at the Harold Pinter Theatre  but Stephen Mangan can, which is why I was really keen to see The Man In The White Suit on stage at Theatre Royal Bath this week. So keen that I actually bought a ticket - press seats are unavailable before its West End premiere at Wyndhams - and called it my birthday present to myself. So this is not a review, merely a personal appreciation, and as there are no production photos available apart from the promotional one which makes it look truly terrible, here's an image from What's On Stage of Stephen Mangan as Sidney Stratton with Kara Tointon as the skirt interest. 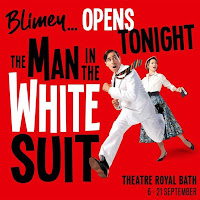 Set in the optimistic 50s. when skiffle dominated the teen scene and the quest for durable, rather than disposable, products was still an industrial aim, the storyline is simple: an amiable young inventor aims to create an everlasting fabric to make life easier for everyone, but neither the profiteering manufacturers nor the salary-conscious workers actually want it... out of this slender cloth a hugely entertaining drama is fabricated, with major credit to the energetic cast, especially to wonderfully endearing Stephen Mangan whose escapes and confrontations must surely have given him some bruises in rehearsals... With a plot-line half-way between Professor Branestawm and the Big Bang boys, it's all mainly slapstick and fish-fights (don't ask) but there's a slender thread of seriousness: the inventor's appeal 'More and more clothes is not the answer -some day it will all catch up with us!' raised audience applause, and there were jeers at greedy capitalist's threat 'For the good of the country, laws can be circumvented, even Parliament prorogued!' At least I think they were jeers, you never can tell with Bath. 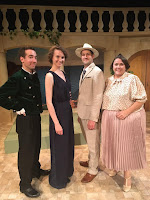 After two such dazzling and inventive parodies perhaps New Old Friends was inevitably disadvantaged in terms of creating dramatic impact with their production Crimes on the Coast which premiered at the Merlin on Friday. The concept seemed promising: a Poirot pastiche held by one narrator, with three lively actors playing every other role aided by stand-in costumes when necessary, but the script was long-winded and the narrative voice lacked impact. There were some entertaining moments - the intrusion of puppets, and false legs to create a small boy - but the overall storyline is slow-moving and incoherent. It might work better in a studio setting, with more audience connection, rather than on a large stage.

Part-performance, part-music event, Vicki Burke gathered quite a party on Sunday to film the chorus - with dance - for her upcoming video project Magic Money Tree (Crowdfunder link here.) Vicki has recorded some of the musicians and Sunday's sunshine was a great opportunity to film the song: here's Howard Vause describing his concept as we gather around the oak tree in Rodden Meadow. - sounds like this will be another great video from this innovative director. 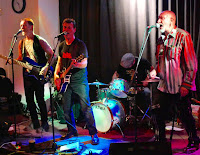 Moving now to music performance, and a highlight at Wednesday's Roots Session at the Grain Bar as The Raggedy Men held a full-house audience rapt - though not too rapt for dancing between the tables... There were several new numbers in this high-energy 75minute set but nobody tires of their fabulously-revisited classics like Teenage Kicks, Guns of Brixton, and (always my favourite) No More Heroes... 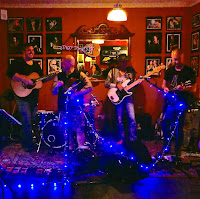 And by popular demand, Splat the Rat were at the Cornerhouse on Saturday with their rapid-fire take on folk classics like the Irish Rover - sadly without amazing 'box-banger' Sultan Vinegar, but with a strong drummer stand-in. 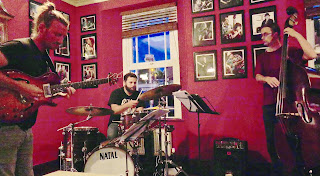 Jazz on a Sunday night at the Cornerhouse is always a great way to end the week, especially after a sunny day: Grahm Dent's trio had as guest for this month's session guitarist Martin Kolarides for an evening of laid-back musicality - I especially enjoyed their version of Thelonious Monk's feisty number Well You Needn't. 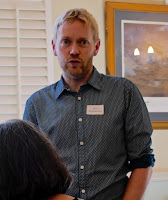 A literary event to conclude this bulletin, with the Society of Authors lunch in Bath organised by Diana Cambridge: an excellent light meal at the Bath & County Club in Queens Parade followed by a well-pitched short talk by Nic Bottomly, aka Mister Bee from Mr B's Emporium, the bookshop with a difference.  Self-published books now outnumber conventionally-published ones, with active local promotion more important to authors than ever now amazon has pushed the trade into so precarious a state, but the good news is that this is the third consecutive year of growth for bookshops. Interestingly, the book trade was one of the first businesses to be hit by amazon, but the survivors of that blitz are successfully fighting back with 'extreme customer service and passionate bookselling' - Frome's Hunting Raven Books is another good example of this - and the trend to environmental awareness is helping stabilise high street trade too. A fascinating summary with an encouraging conclusion for writers of all genres.
Posted by Crysse at 11:03 PM