Summer has come and passed... 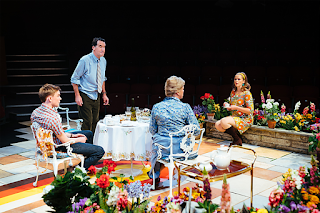 A last look back at summer now, in an immaculately trimmed Home Counties garden, a long time ago : Alan Ayckbourn's first play Relatively Speaking has been revived at Salisbury Playhouse by Wiltshire Creative in a superb in-the-round production. It’s 1965, era of Dollyrocker dresses and The Temptations, London notoriously burgeoning with a new emerging cultural energy while the Home Counties strive to maintain middle class morals and values. When Relatively Speaking opened in London two years later, the evolving scene was reaching its peak in the ‘summer of love’ and this comedy was perfectly pitched, winning rave reviews and establishing Alan Ayckbourn’s reputation at a humorous dramatist.

Historic pieces are always interesting to see in revival, and this is a phenomenally good one: the set alone raised applause, especially when the bed morphed into a lily pond complete with fountain. Converting the main house to an in-the-round venue is masterly, allowing James Button's effective evocation, with Chris Davey's lighting, of both the London flat and the affluent Buckinghamshire garden. The cast are splendid: Hubert Burton as the naive younger man in love with Ginny (Louise Calf),  Tim McMullan as the man he asks for her hand in a misunderstanding only the audience is following, and Caroline Harker as Sheila, bemused but endlessly hospitable as her garden fills with people talking at cross purposes.
Directed by Jo Newman and showing till 28th September - worthing going for an evening of laughter especially if you feel this would be a good time to slip back fifty years a more optimistic past. 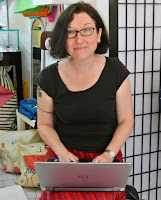 Frome Writers Collective recommenced the monthly get-together evening at the Three Swans with an event I sadly missed - my fingers are beginning to type that phrase on auto, sigh - which from reports was much enjoyed: the readings, by their authors, of the stories created by the Writers In Residence at Frome Festival, back in July.
In case composing a tale 'in residence' sounds a leisurely sort of activity, these brave scribes are 'residing' for couple of hours in public, in a shop or cafe, responding to an unknown prompt delivered in sealed envelope at the start of their enterprise, and their efforts are seized on completion of the specified time... it's writing, Jim, but not as we know it.  Lots of enjoyment though, and all the results admired, with Sarah Deacon's piece chosen as winner of the Alan Somerville award, duly presented on Monday by his wife Jo. Here's Sarah back in June, busy spinning the web of words that won the judges' hearts. 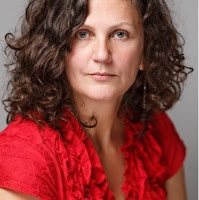 Also on the theme of Frome's writers, Nikki Lloyd was selected as a reader at September's Novel Nights in Bath at Burdall's Yard. This prestigious event follows an effective formula: the first half is a 'writers' showcase' introduced by organiser Grace Palmer and, after a short networking break, Colette Hill introduces a talk, this one by The Bath Novel Awards - immenstely interesting to all fiction writers. Sadly I was already committed, but I look forward to hearing about this from my writing group. I don't know who took the picture of Nikki for their flyer (not me, though I wish it had been!) 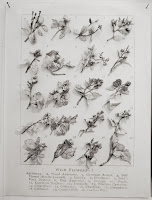 Two new exhibitions opened at Black Swan Arts on Friday. The Long Gallery features work by Fiona Hingston: The English Woman's Flora consists of 3D floral sprigs made from wire, masking tape, and graphite, all based on the illustrations in the Observer Book of Wild Flowers. Each one takes an hour and a half to create, so the 200 exhibits here represent 300 hours of work.

The Round Tower also has a new exhibition, showing the work of the Black Swan Guild in response to the theme BODY:art. This varied and very impressive collection from ten guild members also includes pieces by 3 guest artists and represents a fascinating variety of amazing work, from a vivid study for a cobra tattoo to Dan Morley's delicate drawings of his partner's tiny earring. Kate Cochrane's series of scary images of the Skeleton Woman fascinated me too - a really interesting variety of interpretations on the theme - on till 6 October.

Frome hasn't yet settled into its autumnal rhythm of regular events music-wise, but on Thursday The Valley with Nicola Mascall and Steve Loudoun brought their funky country style with an edge of reggae rhythms to an appreciative audience at the Cornerhouse. 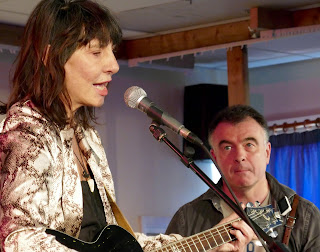 Nunney Acoustic Cafe returned after its summer break for an afternoon of varied musical acts. Frome duo Harding McCabe took the main guest spot with an all-original set including some experimental approaches and themes ranging from flâneuring in London to the voyages of Odysseus.  Strong support acts included Shane Fry with Charles Daniel, Paul Kirtley, and two talented youngsters: Ezra Herring on keyboard and Ben Remington on electric guitar,.