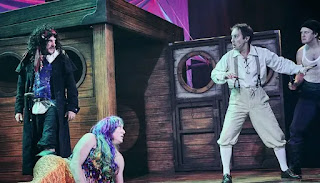 Director John Nicholson has somehow retained a key element in the story - the innocent young hero seeking buried treasure - throughout this hilarious mayhem, even when plot progress at one point depends on the outcome of a game of 'Play Your Cards' right with the audience. Matt Freeman is outrageously memorable, but all the cast are brilliant, interacting with each other and with the audience to make the whole show a giant party. I've never heard an audience laugh so much - strongly recommended.

A different dramatic mood now from  Black Hound Productions, as Frome's fearsomely talented young theatre company has created An Edinburgh Fringe Double Bill previewed at Merlin Theatre on Wednesday.  Both plays use sensitive insight and humour to explore life experiences typical today.  In Seeds of Memories, a young man reminisces in the garden of his much-missed grandfather, finding a kind of magic as well as many memories; in Alright?, a disaffiliated teenage boy struggles to cope in a school-and-home void without support - again, with humour as well as insight.
The first play is a virtual monologue for Ollie J Edwards, supported throughout by Lesley Hayes who morphs between beloved Nan & less-adored Mum, and by Lisha Allen as a glamorous evocation of Nature. There's clever puppetry and evocative, neatly-choreographed, scene-shifts evoking natural magic as emotions swell and shift. 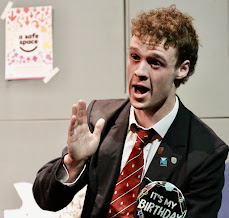 The second play is even more engaging, and did actually drag a couple of tears from me as teenage Noah, played by Thomas Price, flails between the tedium of school and home, with a disaffected school counsellor, an inept father, and a dotty grandmother as his only support. This too is extremely well staged as Noah's isolation is evoked by the total absence of any 'key connections': the school psychiatrist is conveyed by a small recess - "because mental health is an afterthought in eduction" while Gran is a voice from the overly-plush corner where 'like some sort of confused pickpocket,' she drops hip-flasks in Noah's pocket in lieu of any real contact. He's heading downwards until the night his dad snaps & rants at him, and Noah realises 'this is the most we've ever spoken', and achieves an awkward, but realistic, breakthrough.  Both plays are written and directed by artistic director Patrick Withey, who also designed the imaginative sets. 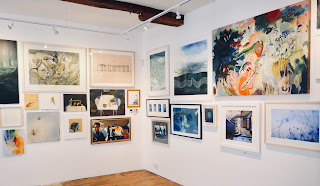 Summertime in the Southwest is as thick with festivals as Edinburgh's Royal Mile is with performers. The Frome Festival of Photography was speedily overlapped by the multi-inclusive Frome Arts Festival, and now Black Swan Arts Open 2022 has filled every available wall and surface in the building with nearly 200 visual art works from over 1000 submitted from far & wide as well as locally - you can see them all in online shop. There's a big buzz around this exhibition, which has insisted on a ceiling price of £1000 from all artists, even the most established - some already showing online as sold. 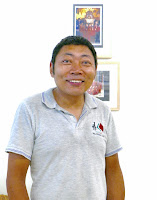 Theres an exhibition also at the Good Heart Tibetan Memories Cafe, where Lockhart Murdoch  has filled the walls with photographs of Tibet from his archives. These are mainly historic press photographs from his vast collection at One A gallery and shop in Frome town centre, intriguing to visitors at the opening and thrilling to chef Namdi, who recognised the figure featured in one - his own lama and friend. (That's him in the background, behind Namdi's happy grin. ) Alison Murdoch, founder of the Good Heart, also spoke of future plans for this pay-it-forward cafe with a focus on community support 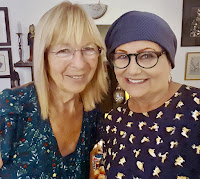 On a personal note: as well as all the above delights, it was my pleasure this week to be interviewed by the truly wonderful Eleanor Talbot about my latest novel Blow-Ins, for her weekly international online show Variations on a Theme (also broadcast on Frome FM next week, link to be posted later). Eleanor's insights are always incisive so our conversation was in-depth & quite challenging - it's great to be quizzed by an enthusiastic fan who also asks questions like "How do you manage balancing the funny with the darker themes?" Perhaps because art is, after all, like life...

This week's landscape is from the riverside at Freshford, at the end of a family walk on Sunday, with the recent intense heat now ebbing into a very pleasant languid warmth. 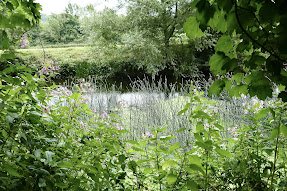 Although Upton Blues is a week behind us now, in another world below the Malvern Hills where a campervan-village among golden 'cat's ear' field flowers waves with colourful flags, it's been great reviewing my photos of that festival... if you don't have facebook, here's a screenshot of a few snaps... 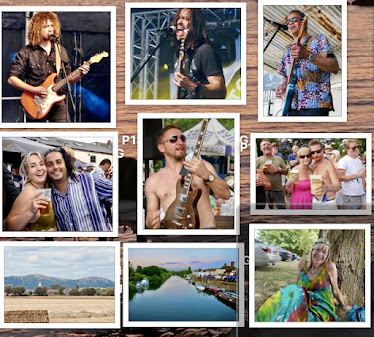 And finally, another in my series of occasional alerts to fantastic online music you might not already be aware of: Peter Bence, officially the world's fastest piano-player. He's Hungarian, travelling Europe giving live concerts & on Youtube too: here's his version of Don't Stop Me Now - there's more fantastic Queen performances on his page here. 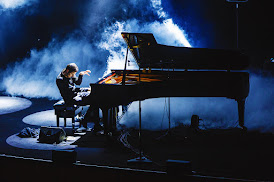