Frome, fizzing with festivals this week 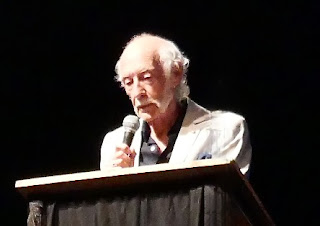 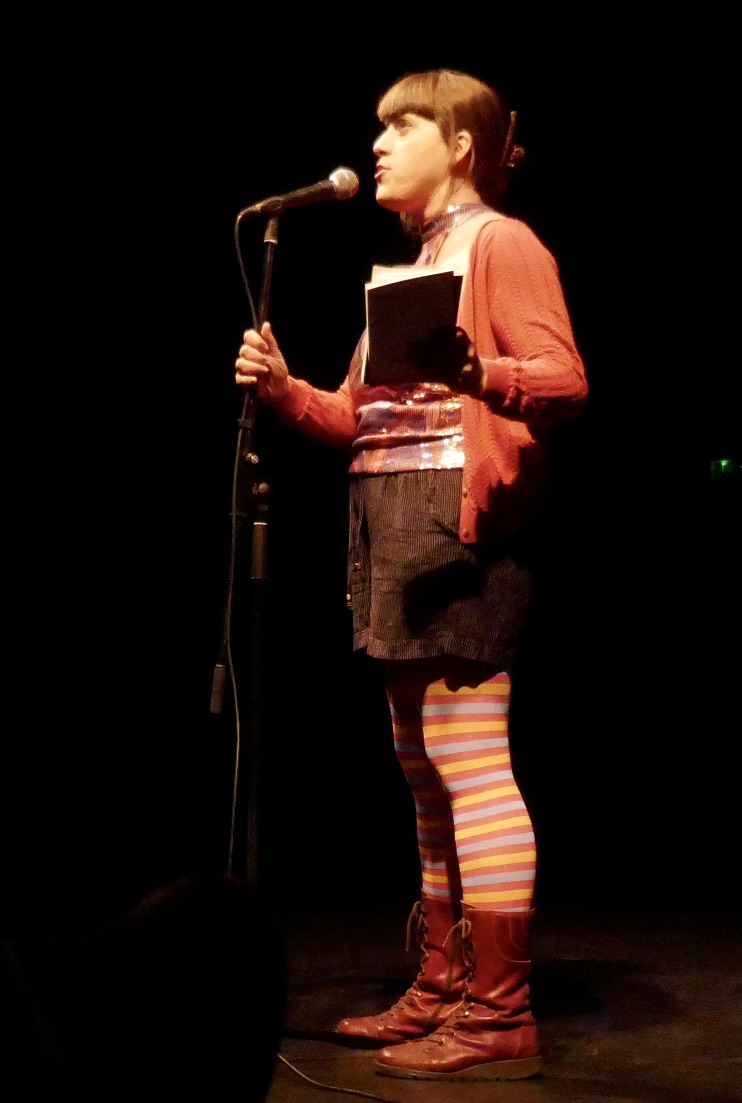 Frome Festival, PHOTO FROME, and Frome Open Art Trail, together conspired to make last week delightful but difficult for the conscientious arts blogger. With 45 festival events over the weekend listed in the brochure, this report can be only a personal skim-through, so let's start in the Merlin Theatre with readings by Roger McGough, premier 'Liverpool Poet' in the 1960s, considered by ex-Poet Laureate Carol Ann Duffy to have brought poetry out of the grip of scholars and back to the streets. Roger is still brilliant, entertaining the full house with random & very funny raconteuring as well as with his recent poetry. That famous offbeat humour is still evident - 'Live fast, die young - failed on both counts" - and his anecdotes of poems sent in by sacked workers when he was Writer in Residence for BT were hilarious. With Liv Torc providing a brilliant opening, this was altogether a fantastic evening of entertainment, and it was a real privilege to share a glass of champagne with the poets and event organiser, Lockhart Murdoch, at his house after the show. 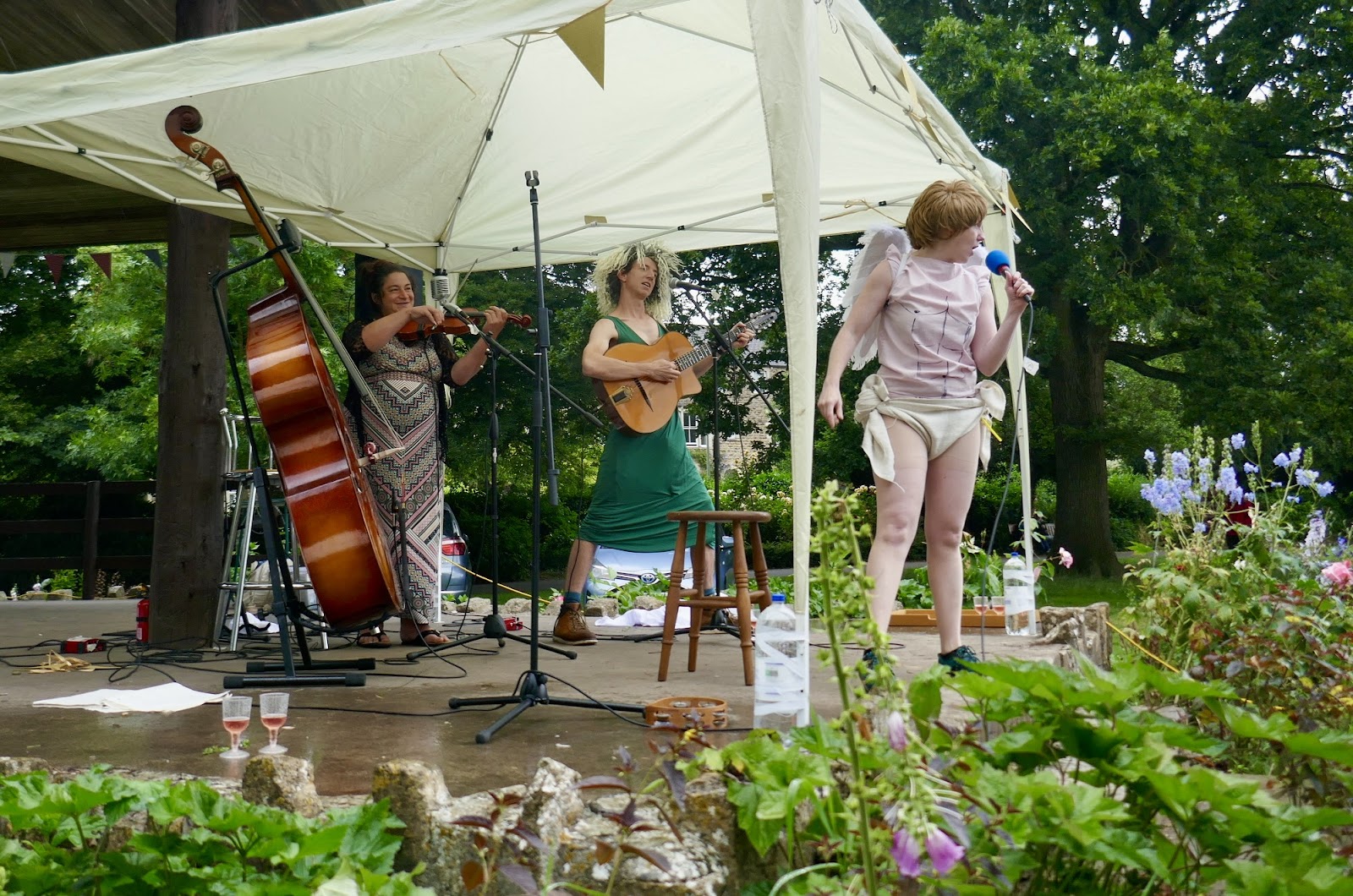 Still with theatre performance, Olivier-award-winning Little Bulb Theatre Company offered their Feast of the Gods on Saturday afternoon in Victoria Park, a wonderfully entertaining all-age, audience interactive, show which delighted a large crowd despite the thunderstorm. It's more about interaction than plot, and after the crisis threatening Cupid's wedding was sorted, the entire audience joined in the feast, with fizz & cakes served by cast & musicians.

There's a tenuous link now with the Sunday Independent Market, as bride Athena is, in the non-Arcadian world, guitarist for Rosco Shakes, who were performing in Bar Lotte during the afternoon - as ever, brilliantly entertaining jump-blues band (since Glasto 'discovered' by The S*n newspaper.) 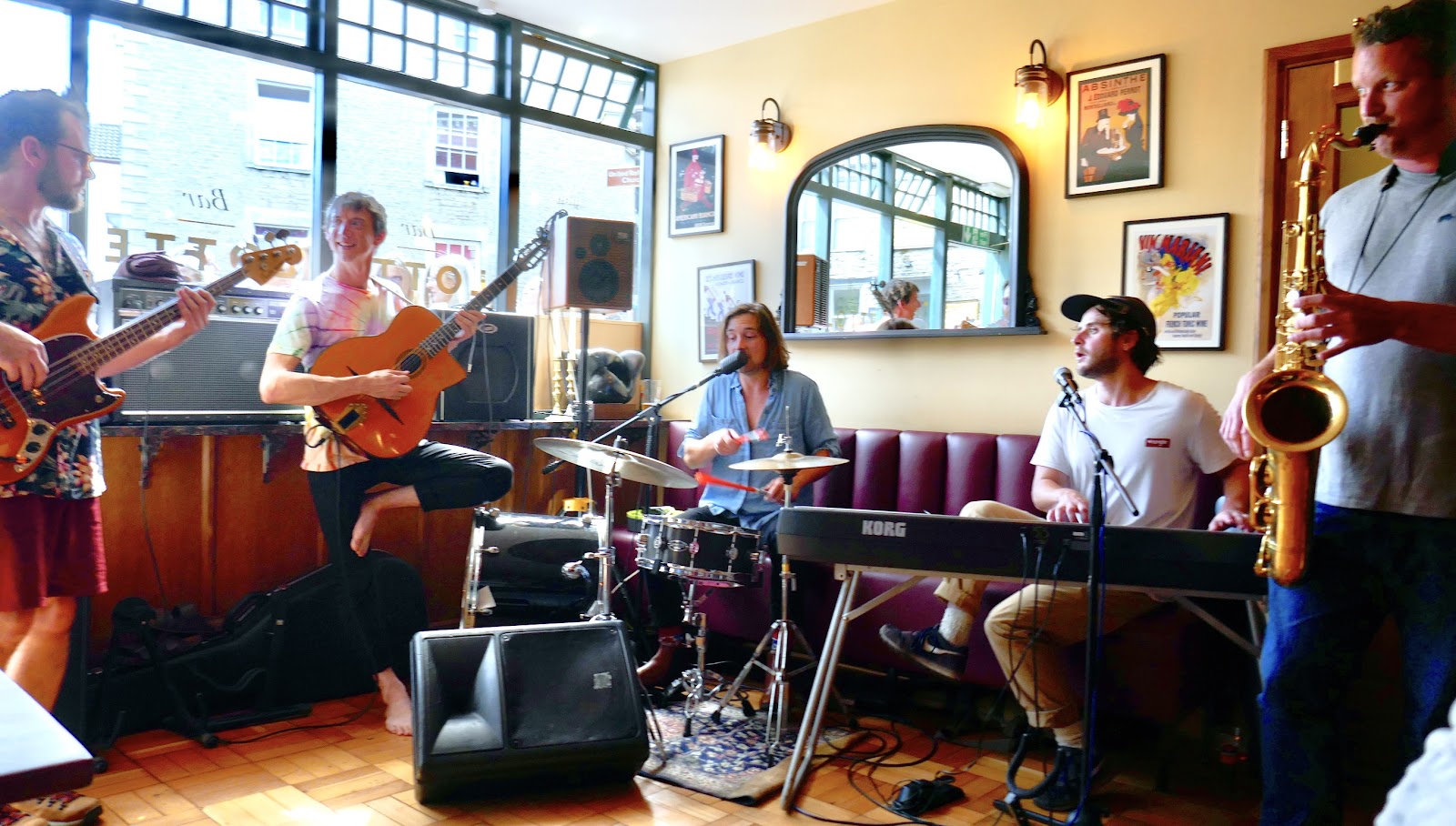 So as we've shifted to the subject of music, there's been a lot of it, and extremely varied, from the many classical works in the programme to the Frome Street Bandits in the Market Place for the Food Feast on Saturday. So here they are, entertaining the large crowd queuing at the food stalls, and here for contrast are The Raggedy Men at the Sun Inn on Friday, Spanish guitarist Juan Picard entertaining at Lo Rapitenc tapas bar, and the immersive audiovisual club night with Sensonic at the Silk Mill. 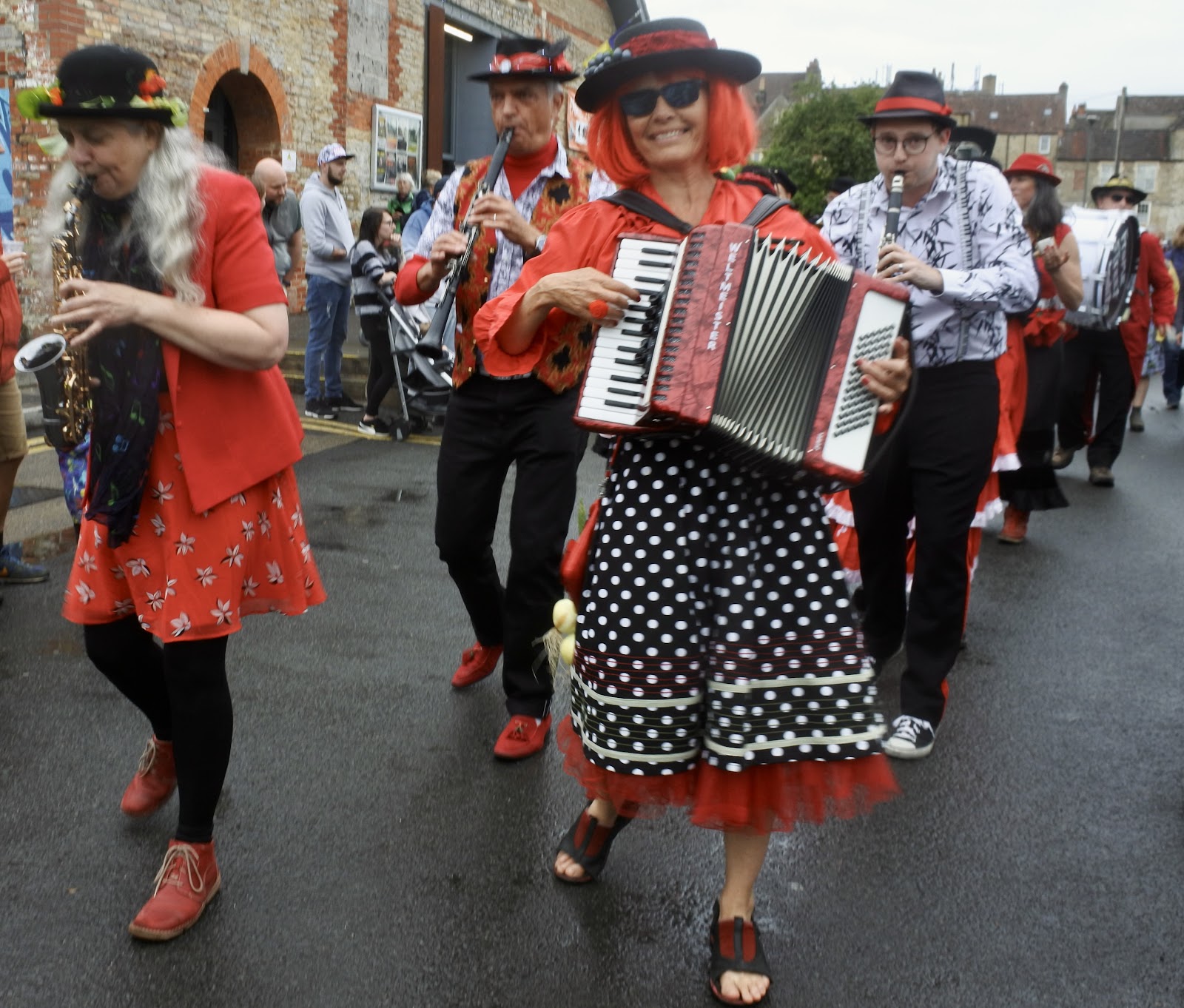 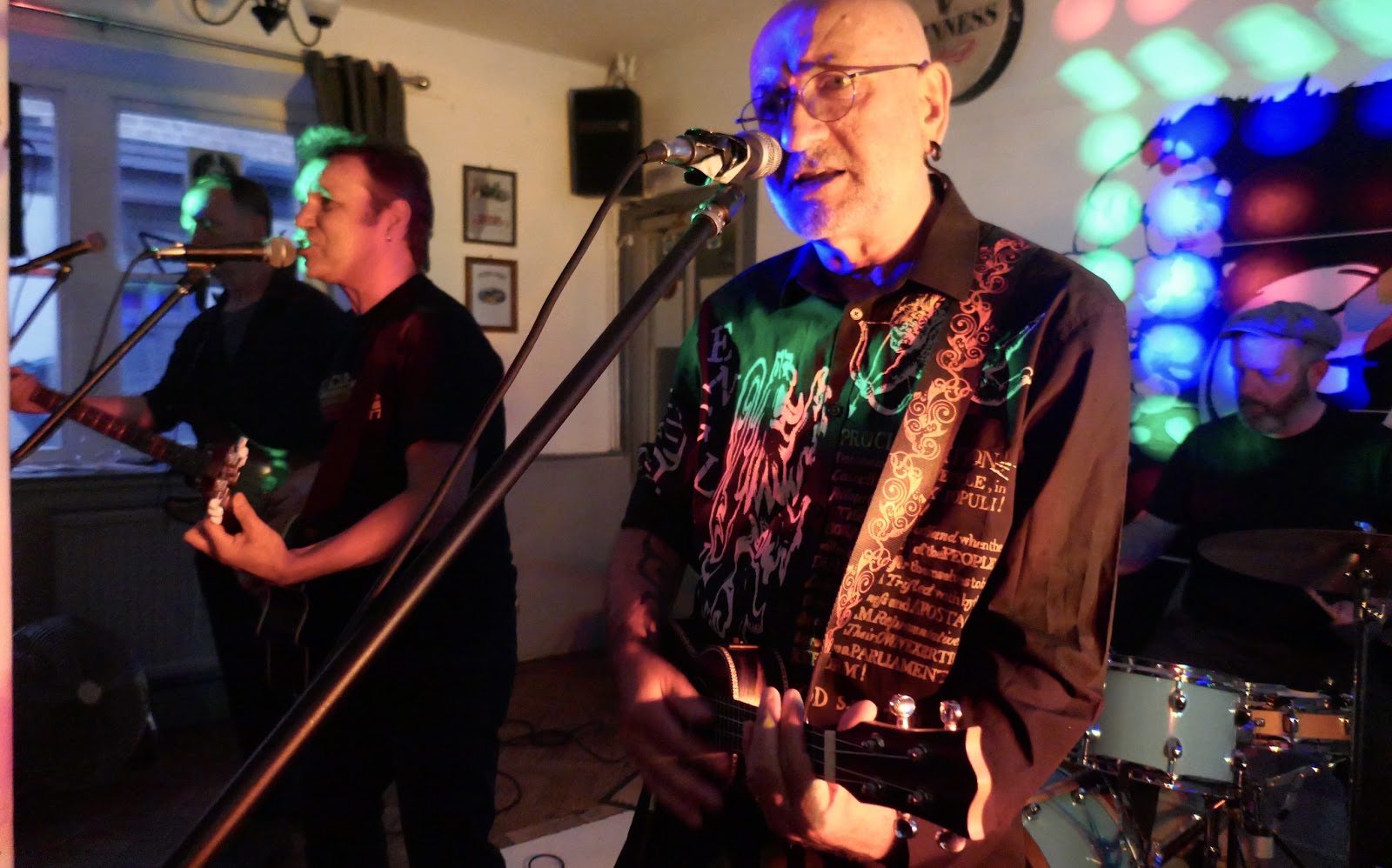 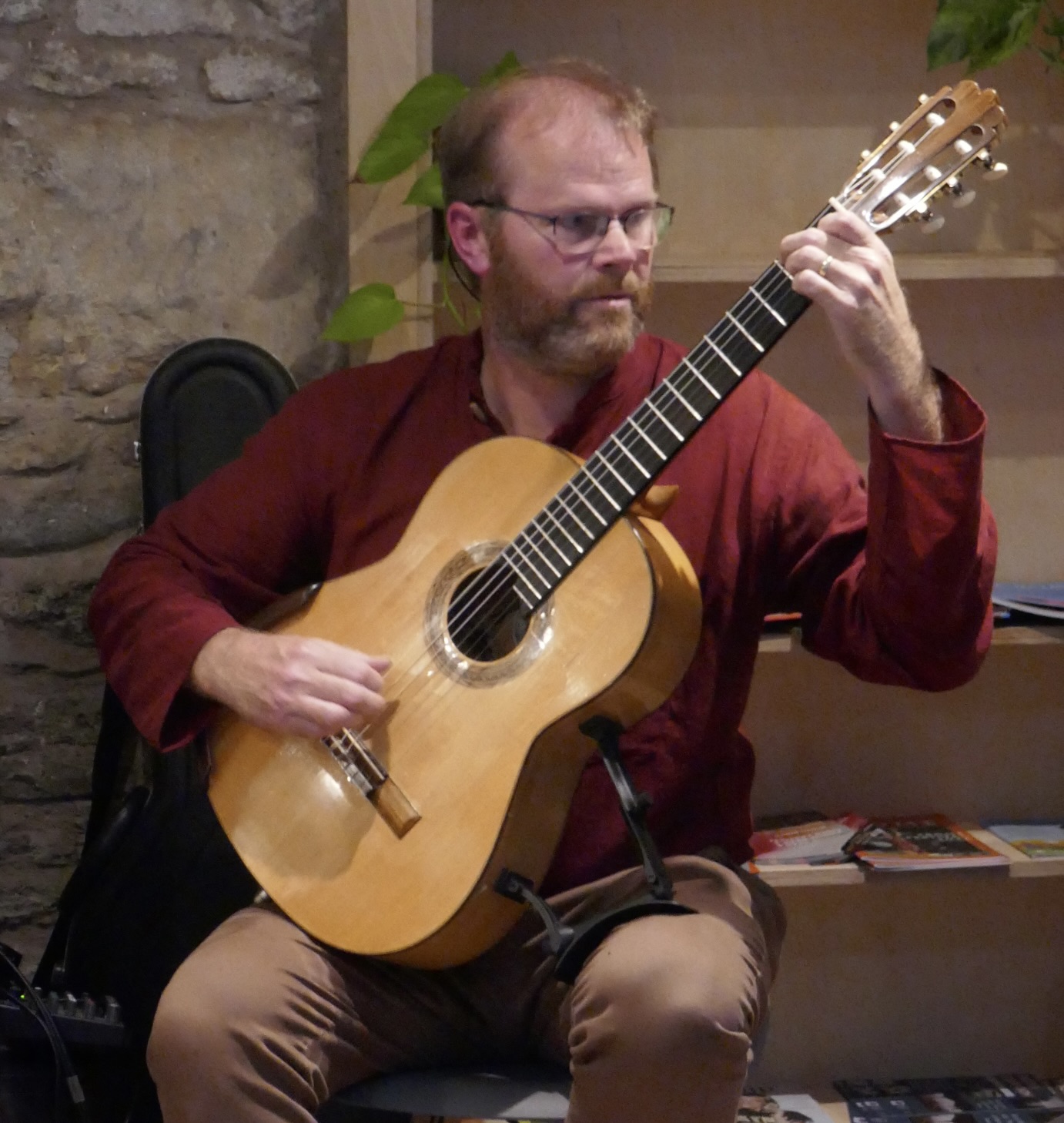 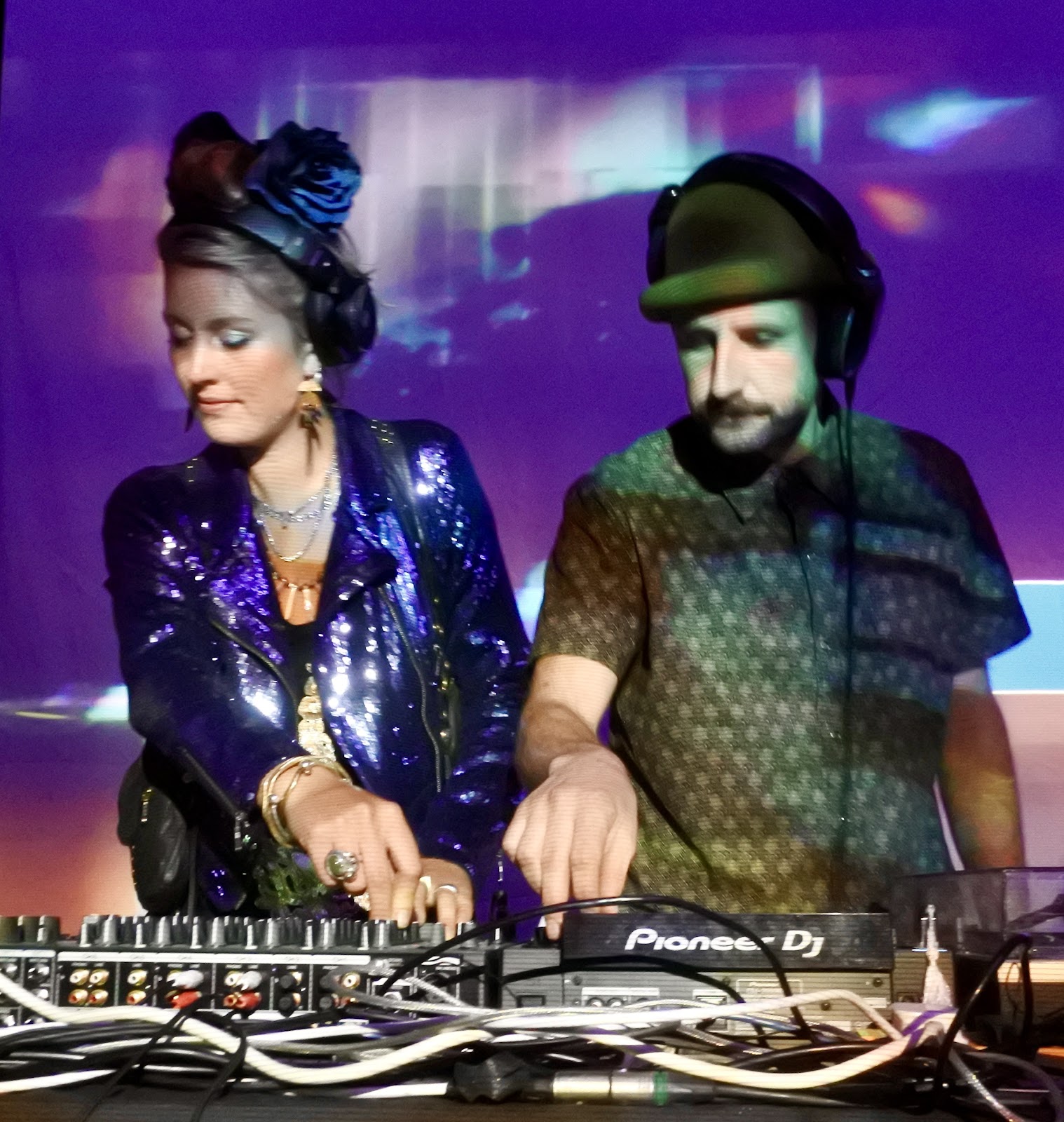 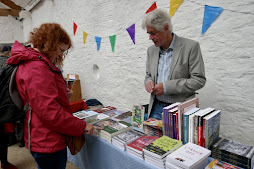 The Small Publishers Fair is a long-standing festival feature, always popular with book-lovers. Organised very efficiently by the Frome Writers Collective, this event on the first Saturday sees literally hundreds of readers and writers checking out the stalls and buying books. Opened this year by Writers' Collective member Peter Clark, whose recent book ''Churchill's Britain from the Antrim coast to the Isle of Wight' was New Statesman's Book of the Year, it remained buzzingly busy throughout the day, with tea & buns thoughtfully provided by FWC members. Definitely a useful event for writers - this was how & where I met my current book publisher, John Chandler of Hobnob Press, seen here at his stall, which now features books by five!! local writers. 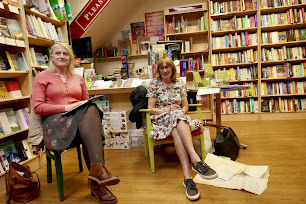 So now we're on that subject, last week saw the launch of another book by a local author who recently joined this imprint: Alison Clink was at Hunting Raven with Frances Liardet on Tuesday to talk about, and read from, her new novel Two Blackberry Lane. A crowded bookshop enjoyed hearing her extract reading, and the backstory of this intriguing and poignant 'house through time' tale, inspired when Alison discovered some old deeds in her own house.
Still with words, last week also saw the long-delayed return of a Poetry Cafe in Frome as a venue has now been offered: an upstairs room at HOME, the new cafe/bar in the centre of town. Twelve spoken word performers shared their poems in a convivial & supportive atmosphere, with a wide range of themes, moods and styles. A rich event - though the only visual evidence is a phone shot at the break, which fails to capture the rapt attention during readings... 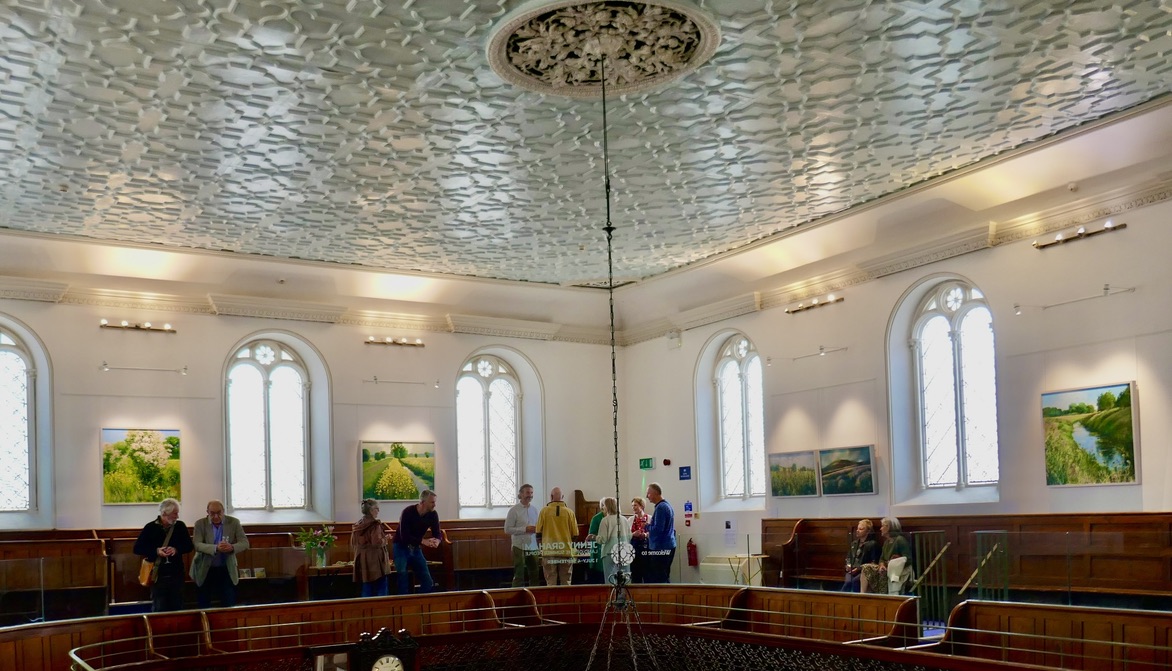 Another opening now, as 27 galleries open their doors to visitors for the Frome Open Art Trail 2022, on throughout the festival. A full report will hopefully follow in the next edition: here's your taster - venue 9. Alex Howell paints evocative landscapes and seascapes, and her friendly opening was full of people discussing where they would hang their favourite images, so hopefully her sales will go well. 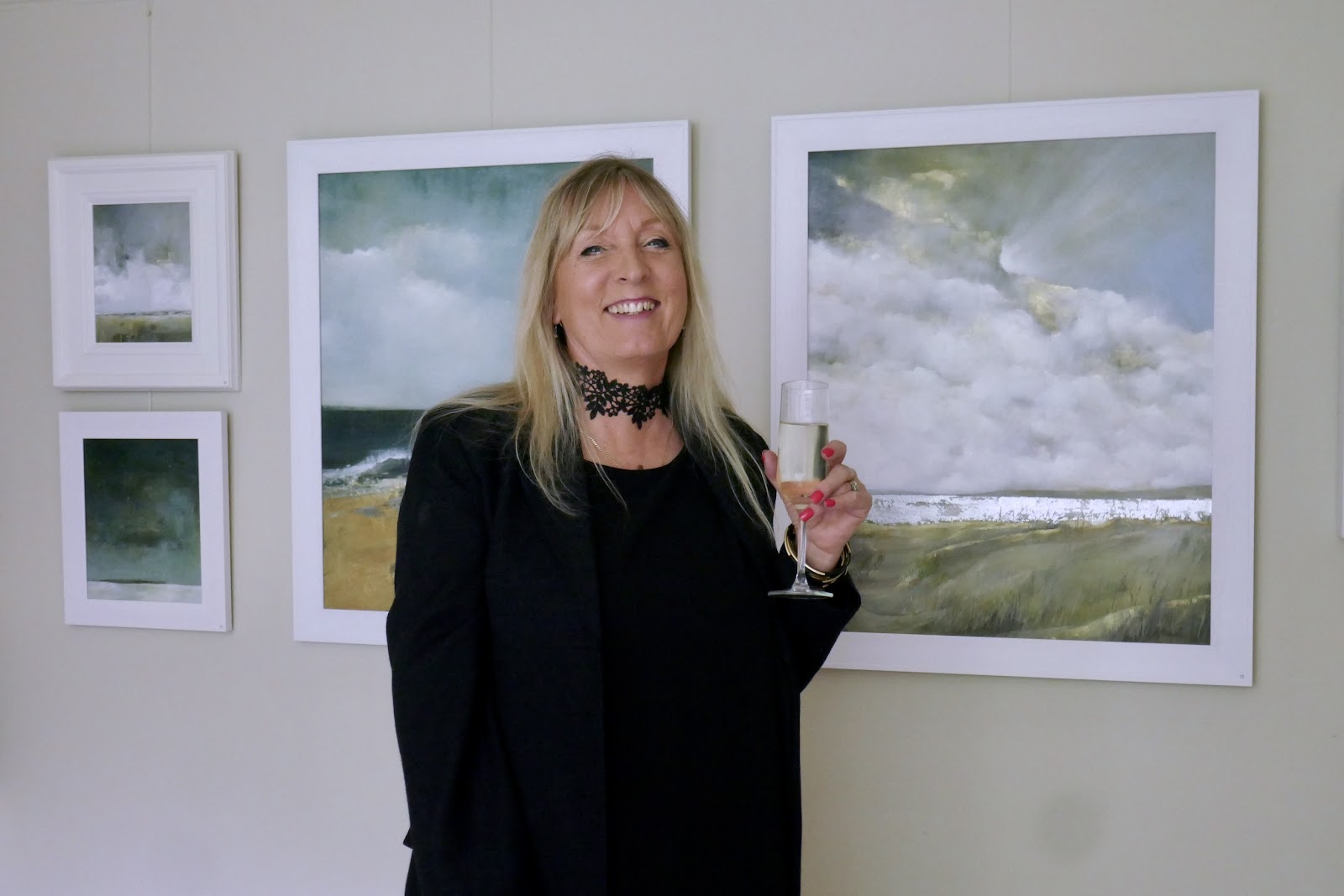 And art brings me back to photography, specifically to the final two exhibitions in the PHOTO FROME project which opened last week: 23 Bath Street is the quirky location for the work of Ramona Carraro 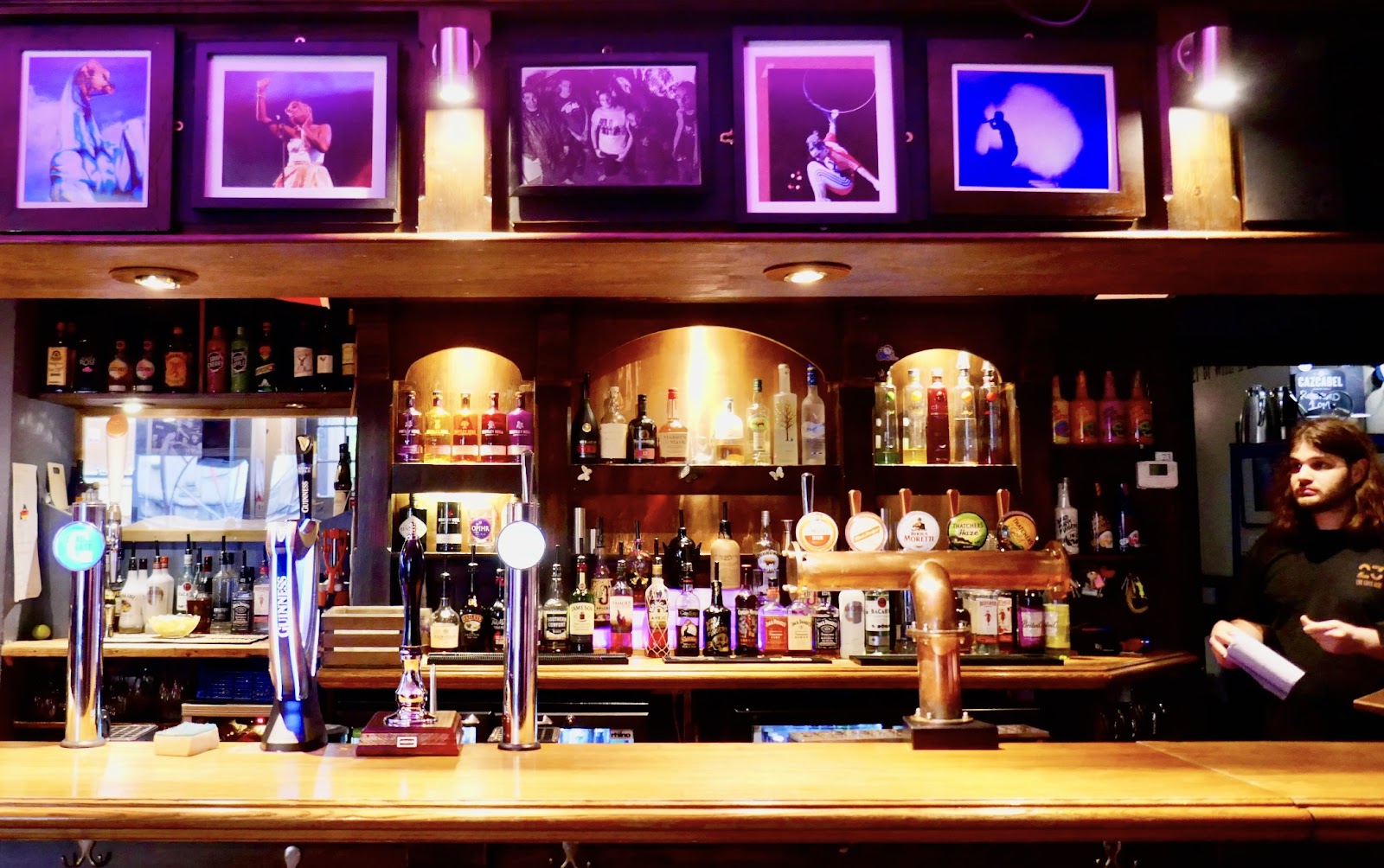 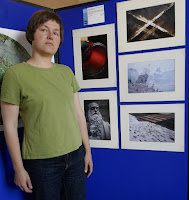 and our own local camera club, Frome Wessex Photographic, has an impressive display of talent at the Town Hall. The theme for all members was "My vision, my process", interpreted in various different ways. Talking to the photographers just before the opening, it was moving to hear from Anna Kovalevska, whose theme was meditation, that the red image in this shot was taken in her homeland Ukraine on the day that war began.
Posted by Crysse at 2:03 PM