Our revels now are ended. Frome Festival, the week when every public space offers performance nightly while homes & gardens across the town open daily to share artistic & horticultural splendours, is over for another year. Festival Director Martin Dimery has steered the show splendidly for his final time, and can step down with due dramatic pride in this year's showcase of the range and quality of events. 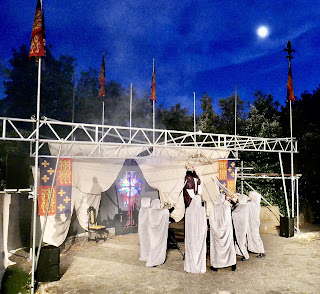 And as Martin is also responsible for this festival's theatrical highlight - he wrote the book & lyrics and directed the production -  we'll start with The Haunting of Richard the Third. With music by Martin and David Hynds, Kairos Theatre Company performed this stunning drama, emotionally gripping and crammed with jeopardy and joy, on ECOS amphitheatre. It's the eve of the Battle of Bosworth Field, and Richard, last Plantagenet king of England & last English monarch to be killed in battle, is recalling his increasingly indefensible rise to power. We see his glory days, and his fall, overwhelmed by the Yorkist army of Henry Tudor, whose dynasty ruled England for the next hundred years. It's now 20 years since Richard’s body, in an unmarked tomb, was found in a car-park in Leicester. Steve Middle was superb as the degenerating king, and Sarah Wingrove genuinely moving as his queen, with all the cast of supporters & foes, nobles & peasants - and ghosts too, combining to create three hours of riveting entertainment. 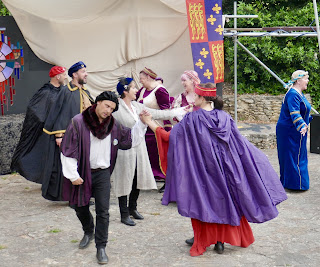 With several theatrical productions, and only one week of festival, choice was difficult: my next pick was the black comedy Silence by Moira Buffini at the Assembly Rooms, a Dark Ages drama billed as Monty Pythonesque. Written in 1999 and well received at the time (it won an award for best English language play by a woman) this production by Frome Drama definitely had its moments and was well acted and often funny but perhaps Black Adder and social media have raised the bar for dark age satire as there wasn't much edge or bite, and the thought-provoking aspect seemed lacking. 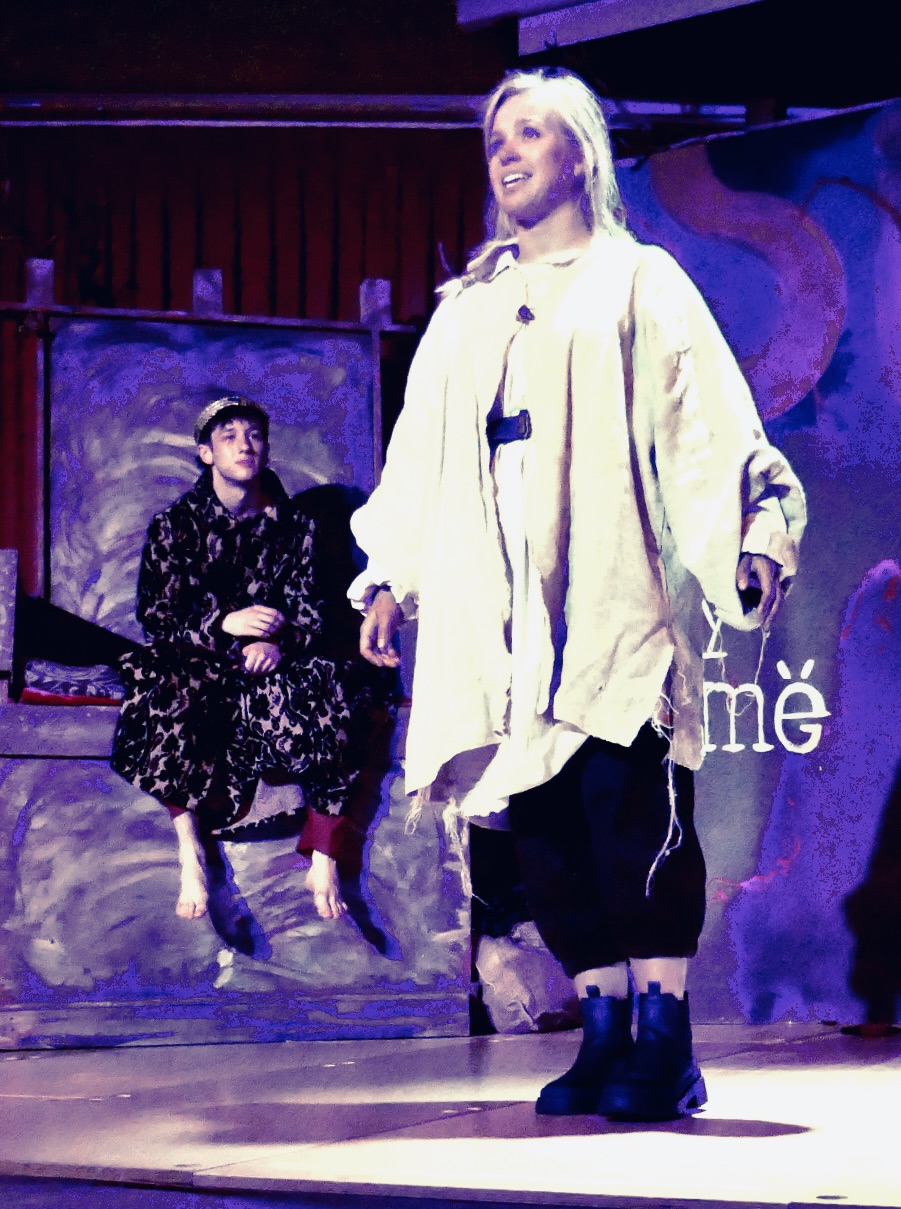 Even the Museum became a performance space this year, as Rosie Eliot of Nevertheless Productions together with Debbie Clayton created a clever, funny, and informative drama around some of the characters in the current 'Celebrated Women of Frome' exhibition there. The Auditions imagines six of Frome's most colourful historic characters chatting as they wait for their moment to impress the judges of Britain's Got Talent: here Christina Rossetti worries that In the Bleak Midwinter will be dismissed as too gloomy while Emma Sheppard is keen to further her philanthropic work with a rendition of Bring Me Sunshine - an apt choice as her 1859 pamphlet urging workhouse reform was titled 'Sunshine in the Workhouse'. 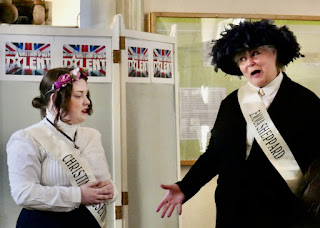 Segueing from conversational speech to narrative, the dark horse of the festival was a one-off extravaganza at the Assembly rooms on Monday: The Magic of the Universe from the Pagan Gospel Groove Machine, led by Ed Green, promised 'an interactive immersive experience with audience participation, harmony singing, music and dancers, told with love, hope, spirituality and connection'. Think '70s 'happening' idealism, with shared intention like an '80s 'encounter group'. It was moving simply listening to the music and watching the backdrop film of galactic activity, but the hall was too full of seating for the audience to actively join the dancers - a really lovely immersive experience though. 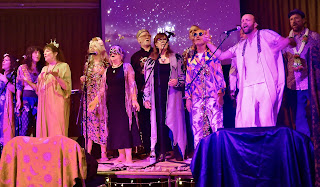 As you'd expect, bands were playing in most of the pubs around town - Frome's popular Unit 4 had a 'Soundcheck' show on VRA, viewable here - and there was also excellent live music at nearby Marston Park Glampsite, a pleasant 40 minutes walk away, down lanes and across fields, which offered free access during festival week to locals - fabulous to lounge by the lake at sunset, listening to high quality live jazz from the Damian Cook Trio, with Bryan Posslethwaite on piano & Henrik Jenson on bass. 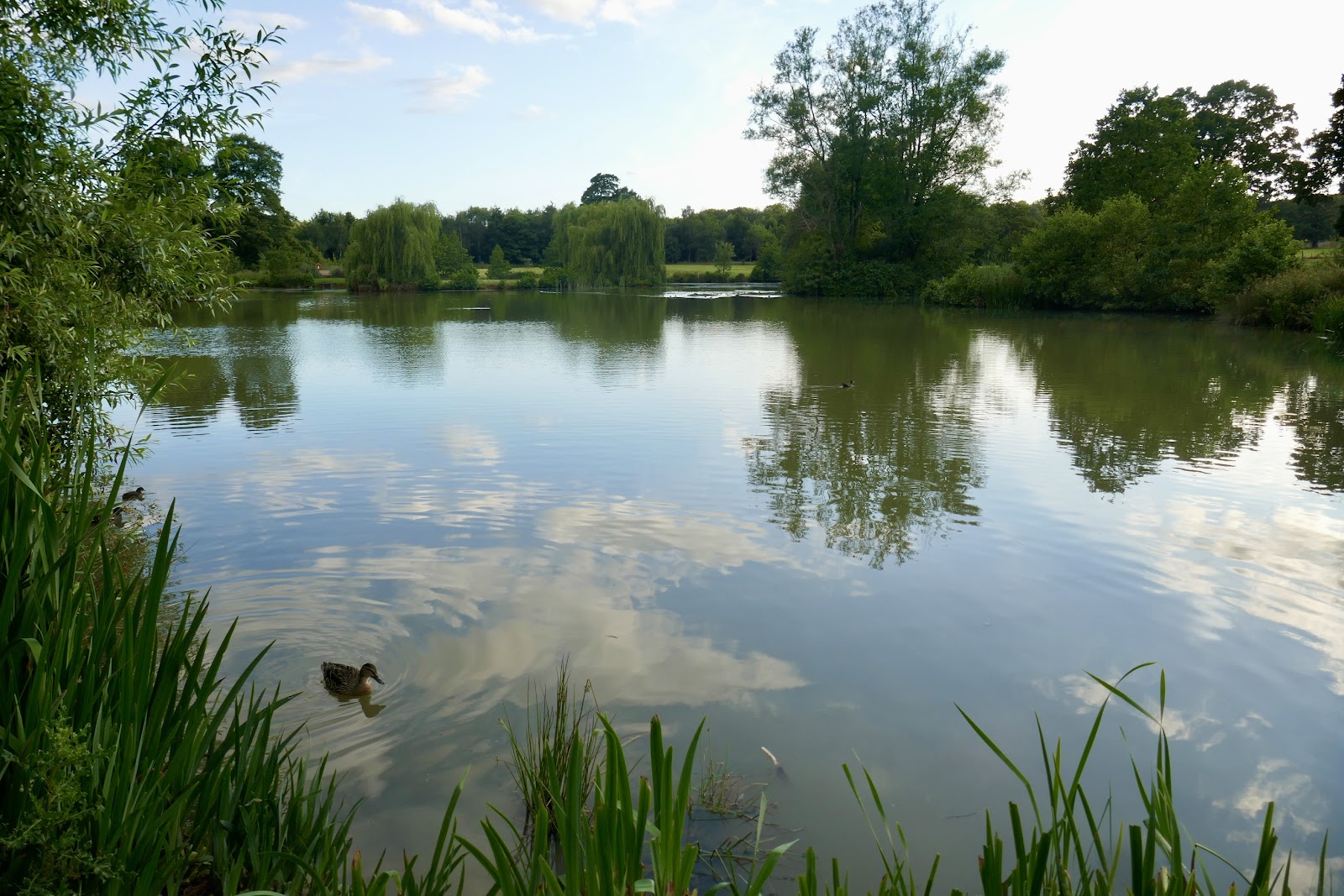 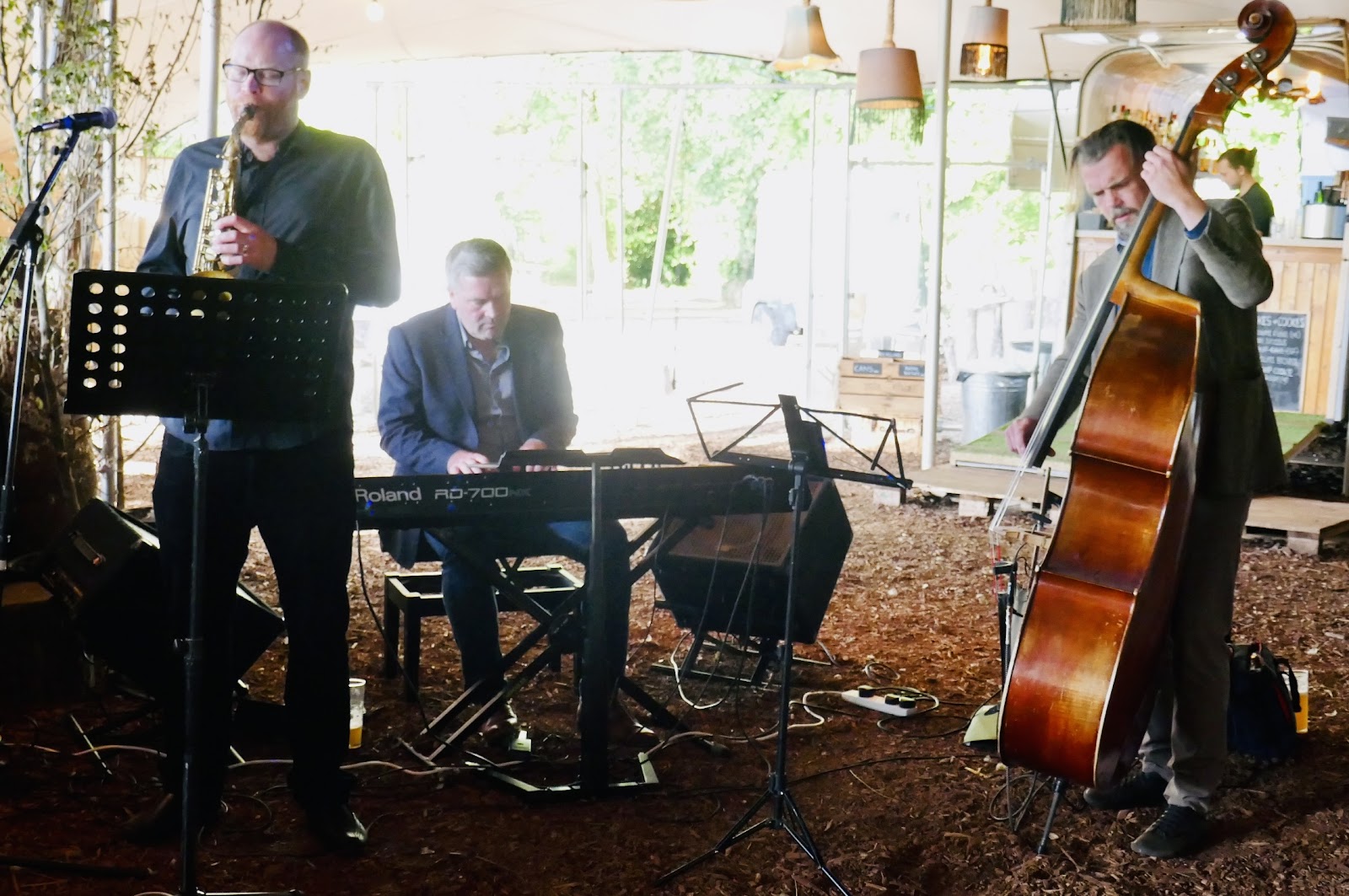 These were my evening highlights, but throughout the daytime there was an amazing array of art on view in venues right across the town - and beyond, too. Among my favourites were Cameron Scott's relief wood carvings, and the superb paintings of Miguel Ornia-Blanco and Dan Morley in their Silk Mill Studios, but there was much more that was hugely impressive too. 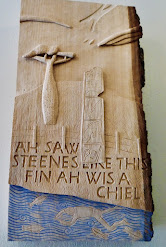 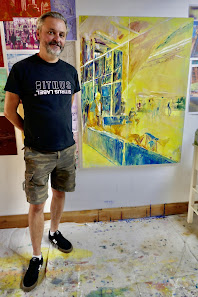 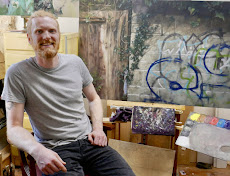 The final weekend brought another Frome Festival extravaganza/happening - the Open Gardens, when 42 private gardens in and around Frome reveal their locations and invite visitors to call in and admire them - the map plus details is a well-invested fiver, as wandering these gardens and talking to their friendly tenders is worth five times that. Lavender thick with bees, forests of hollyhocks, lily-ponds, trees, curios, and cups of tea all feature in these drop-in visits, with garden-lovers comparing notes and sharing recommendations. 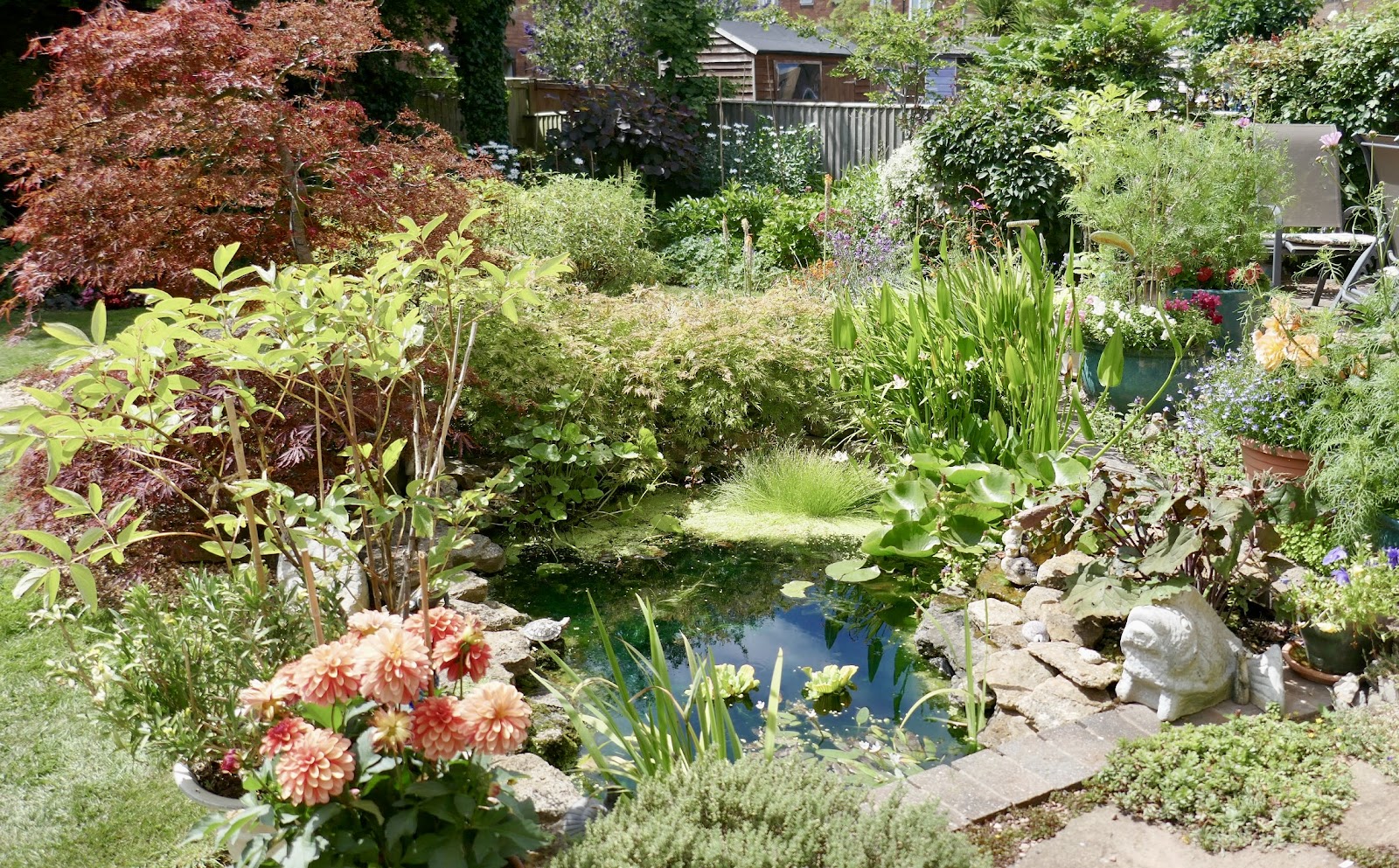 And finally... this week's artsy account of life in Frome life will conclude as mine did, on a writerly note: Frome Writers Collective gathered on the ECOS site to read flash fiction to each other - thanks Dawn Denton for this pic of me, with organisers Gill Harry & Brenda Bannister - 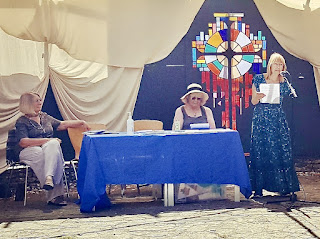 - and to discover the results of this year's short story competition, judged by  journalist and novelist, Keith Stuart ... and the winner was: Nikki Coplestone! And my festival, having begun by sipping champagne with Roger McGough, ended with the monthly 'Proof Pudding' book-club meeting at River House, where we share our reviews of titles sent to Hunting Raven Books for manager Tina Gaysford-Waller's consideration - mine this time was STALKING THE ATOMIC CITY by Markiyan Kamysh, a shocking yet lyrical account of the perilous life of an illegal returner to Chernobyl.
Posted by Crysse at 1:31 PM