Much Ado about lots 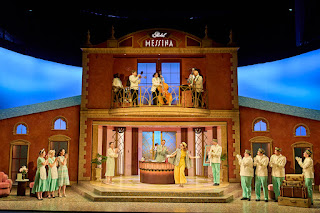 This week's bulging bulletin begins with a trip to London's South Bank for a National Theatre production of Much Ado About Nothing - the final splurge of a gift-token from son2 last year. Directed by Simon Godwin with a lavish two-storey set designed by Anna Fleischle & Evie Gurney's amazing rag-time era costumes, this seemed at first a bit too 'Post-Modern Jukebox meets Hi-Di-Hi' for dark themes of betrayal and redemption but, after a frivolous start, it steered its way into a lively, funny, clever production.  Much Ado is notoriously 'difficult' although a comedy: we have to relish a happy ending that involves a mistrustful bridegroom who publicly humiliates his bride, whose sassy friend promptly demands his death from her own fiancé… some productions simply give up on resolving these aspects, but this production really has a go and, for me, really succeeds. Much credit for this is down to Ursula Dowel, Beatrice’s delightful maid, and the director's decision to created a balcony scene which tricks her as well as the watching spies - there’s quite a bit of this kind of softening of some of the bard’s rough edges, which helps to maintain much of the glamour of the upbeat opening scenes throughout. 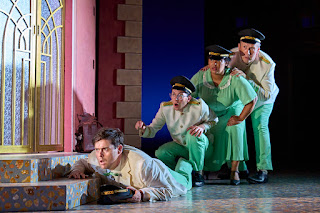 The sequence when a team of inane watchmen ineptly uncover the treacherous plot to discredit Hero is direly unfunny in most productions, but in this one it's somehow hilarious - big credit to David Fynn's Dogberry and his Watch. Here they are (above), and here too are Benedict (John Hefferman) whose friends tricked him into wooing and Claudio (Eben Figueiredo) whose boss did his wooing for him, though both got their girls in the end. A great interpretation of a play that's mainly about gossip, well presented and performed.  (Press image credits Manuel-Harlan) 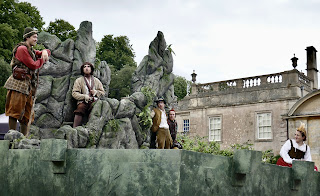 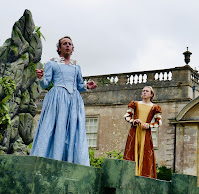 Still with the bard, this time al fresco with the wonderful Lord Chamberlain's Men at Dyrham Park. There’s something intrinsically funny about men dressed as women, and when a man dressed-as-a- woman dresses as a man, and is played by a man-dressed-as-a-woman-dressing-as-a-man, the comedy is inevitably compounded. It can get chaotic, of course, so this company deserves huge credit for their brilliant, clever, production of As You Like It, in which seven men played every role with clarity and enormous humour. Rosalind (Ben Lynn) and Celia (Jonny Warr) are both adorable, and the rest of the team are funny and feisty, as necessary.  Handsome Orlando (Andrew Buzzeo), smitten with love for Rosalind, is excellent; Jaques’s melancholy is less turgid than sometimes, and the romance between tiny clown Touchstone and beefy Audrey is funnier than sometimes, so win-win all round. 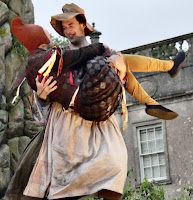 The set was a bit odd, though: a turd-like monolith neither palace nor forest, but probably easy for touring. The company will doubtless be exhausted by autumn - their tour schedule involves 73 locations - but they will have made a lot of people very happy.  At Dyrham Park at least 200 of us gathered on the lawn with chairs, rugs, and picnics (in one instance with a folding table) and the multi-talented cast organised us seamlessly into best-viewing positions for all. It’s a great show - go if you can. 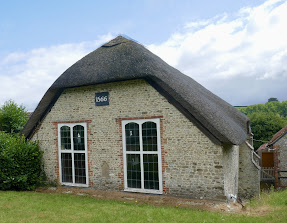 This double-drama concluded my week-long birthday bonanza which also involved classy dining & bibbing and wonderful walks with son1 and with friends, discovering places nearby but somehow previously unknown to me - here's  Horningsham Independent Chapel, the oldest Free Church in England, build-date of 1556 and still in regular use for worship. This is within the 9,800 acre Longleat estate, famous for costly attractions - stately home, safari park - but free for walking around the lovely wooded environs where workers' cottage gardens look like flower-packet pictures and new-laid eggs from free range hens are £1.50 a dozen. 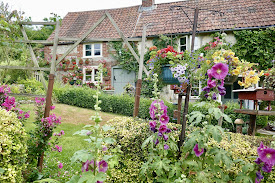 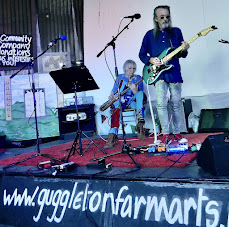 Moving on to music now, with another session at The Guggleton in Stallbridge, the Arts Centre with a difference, a wonderfully supportive community venture to foster arts of all kinds, with the Open Mic nights regular well attended. The session on a sultry Thursday evening had some real highlights, one of which was talented duo The Davenports, aka Annie and Roger, with a moving version of that country classic Please Remember me, and a very lively finale from Alan, aka The Rhythm Junkie, with a Bob Marley mashup and mass Oasis singalong. Always a good night at The Gugg outdoor venue - with pizza and bar provided too. 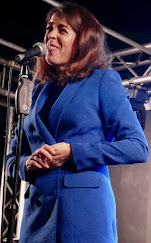 A fizzing finale to this week and this month, at Bath's Komedia, Chortle award-winning 'Best Venue in the West & Wales' for comedy: here Rosie Holt, aka twitter's @RosieisaHolt, on Sunday night shared a preview of her Edinburgh Festival show. 'an hour of character comedy based on her hit satirical videos'.
Rosie's horribly accurate parodies of political personalities both real & imagined are side-achingly funny, and the evil simpering of her inventions so appallingly realistic that confused commentators become apoplectic with virtuous rage. Rosie's show is already tipped by Time Out in their top 10 best comedy shows in the Festival - if you're up in Edinburgh in August, don't miss her!
Posted by Crysse at 10:19 AM

Email ThisBlogThis!Share to TwitterShare to FacebookShare to Pinterest
Labels: As You Like It, Dyrham Park, Horningsham, Komedia, Lord Chamberlain's Men, Much Ado About Nothing, National, Rosie Holt, The Gugg