This is a good time for theatre enthusiasts. Restrictions now allow companies to find ingenious ways to rehearse, but are still tight enough for online productions to continue - and by now they're fairly sophisticated. So Bristol Old Vic is now offering Touching the Void as performed in " 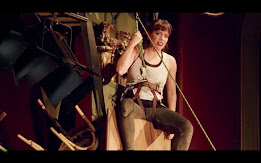 a bespoke sound-stage in its 255yr old auditorium which not only created the atmosphere of being in a theatre, but transported viewers to the mountain itself -from anywhere in the world." Devised by BOV director Tom Morris in 2018, this drama tells the true story of an outrageous attempt to scale one of the most difficult peaks in the Peruvian Andes, as explored from the perspective of a non-mountaineer marvelling that anyone would purposefully risk their life to purposelessly climb a crag. Which is most of us, I imagine.  In this dramatisation by David Greig of the book of the same name by Joe Simpson, the nearly-deceased climber, it’s his sister who takes the inquisitorial role, initiating the dramatic interaction by repeatedly asking why, until Simon Yates, the other climber, compels her to explore their drama via furniture & fittings and a vivid imagination. There's a good short summary here.  The initial, live & highly acclaimed, production came at the end of the Bristol Old Vic's long closure for a £26m renovation project so it's fitting that this revival celebrates the gradual ending of the plague closure. Fingers crossed, anyway. Fiona Hampton takes the prime role of Joe's sister, with Josh Williams as Joe and Angus Yellowlees as Simon, and Patrick McNamee as a random hitchhiker.  Set & costume design by Ti Green. (screen shots by me.) 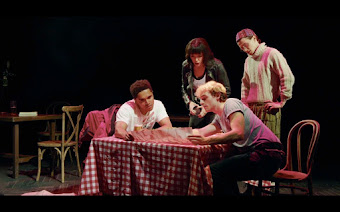 Also last week, Shakespeare at the Tobacco Factory offered an online medley of Shakespearean sonnets and speech extracts in a patchwork of recitations by 'five contemporary characters as we explore our relationship with our city and our culture.'  The Place At The Bridge is written - or rather, compiled - by Chinonyerem Odimba and directed by Helena Middleton, and has the immense bonus of constant accompaniment throughout by the brilliant Gambian kora player Sura Susso - here with Zachary Powell, an impressively strong presence throughout. (my screen shots.) 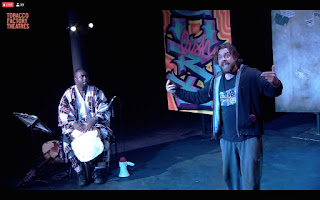 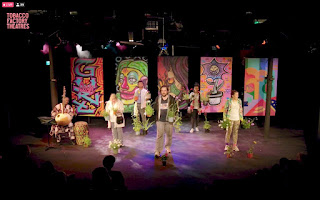 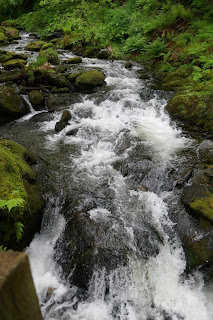 Moving now from Peru via Bristol to Wales: to Tywyn, on the southernmost coastal tip of the Snowdonia National Park, an area of forests and lakes and - last week anyway - solid sunshine. Developed into a resort in the 1870s by benefactor John Corbett, it's now famous for its narrow-guage mini Talyllyn Railway which appears inspired by Rev W Awdry but was actually designed to service the slate mining up the hills in Abergynolwyn.  Slate is everywhere - even fences are sometimes made of slate.
Our basecamp was a well-equipped camper-van site between a broad, silvery-sanded beach rimmed by grassy dunes, and viridian fields filled with grazing sheep, extending to the distant undulating verdant hills. A lush scene.  And nearby, the amazing Dolgoch Falls descend across flinty rocks in a fern-filled forest, and a mere 4.7-mile-walk in blustery winds along the sand, there's the picturesque sea front of Aberdovey - 'front' being the operative term, as there's not much build beyond the line of gaudy buildings that look like Villajoyosa without the palm trees, but the cappuccino ice-cream is lush. 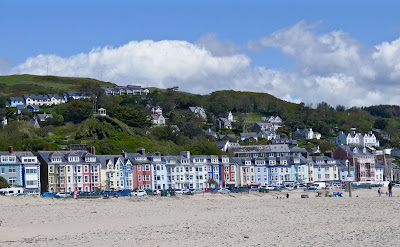 We were back in Frome in time for the Saturday market in glorious sunshine, complete with Paul's Tribe busking on the bridge and for a sumptuous garden party hostessed by Frome FM broadcaster, podcaster, & all-round delightful person Eleanor Talbot. 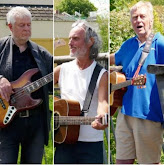 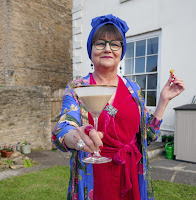 Silk Mill opened its doors at the weekend for an exhibition by artists in the Visionary Arts Collective: The Future Is Now features a diversity of psychedelic and visionary images in a range of media. Much of it is beautiful, even when menacing, like these extraordinary figures. 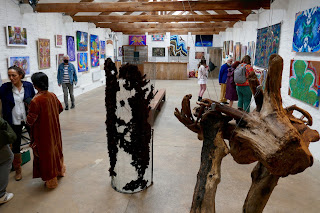 And there's welcome news from the Friends of Easthill that Mendip DC have agreed not to use this ancient field for their housing development.  This is a big relief in terms of preserving the green lungs and biodiversity of Frome but, as campaign initiator Bharati Pardhy wrote when reporting the decision, the need for affordable housing is still a community concern. And it remains to be seen how, and if, Frome can retain its independent integrity after the local government reorganisation. Fingers remain crossed.
Posted by Crysse at 5:42 PM