What fools these mortals be! existentialist angst and funky romps 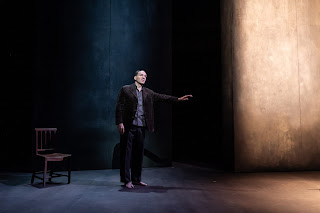 TS Eliot regarded The Four Quartets, written over two years in four different locations, as his masterpiece: they secured his Nobel Prize, yet over half a century later their meaning seems as abstract and complex as ever. They don't have the vivid, witty, characterisation of The Love Song of J Alfred Prufrock, or the epic storytelling of The Waste Land, and while his stage work like Murder in the Cathedral and The Cocktail Party (not to mention Cats!) is readily accessible, these four long reveries. Burnt Norton, East Coker, The Dry Salvages and Little Gidding are obscure, disturbing, questings about existence and time in a world where Humankind cannot bear very much reality. 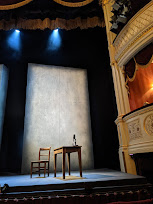 Ralph Fiennes, who delivered and directed this performance at Theatre Royal Bath, found nuances of mood in his mesmeric presentation, and the subfusc lighting by Tim Lutkin and monolithic imagery on set (design by Hildegard Bechtler) support this sense of elemental isolation. The recitation lasts over an hour but Ralph Fiennes has such a strong affinity with the poet's words he might have been simply speaking aloud his own musings.  It's an extraordinary performance, forensically demanding yet ultimately emotionally unyielding.  Ralf Fiennes image by Matt Humphrey, set as seen by my phone. 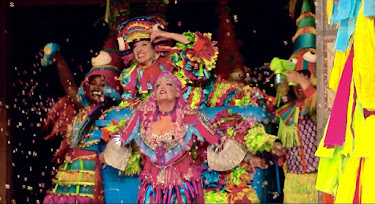 At the other end of the performance spectrum, a splendid romp from start to finish - which was 2⅓ hours later:  Sean Holmes has directed A Midsummer Night's Dream at The Globe as if everyone in the audience either knows the play backwards or simply doesn't care as long as it's funny. In these trying times, perhaps chiming with national bewilderment, it works absolutely brilliantly. 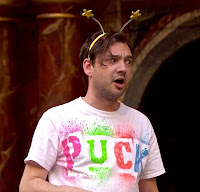 Everyone in the cast seems to play every part at some time or another - fairies, lords, ladies, and mechanicals all so mixed up that you can only tell who's playing Puck now by the labeled teeshirt.  Bottom's scene with Titania is played like a couple of tipsy landladies at a fancy-dress party, one of the mechanicals is played by an audience member (who is enticed by the cast to interrupt proceedings for a selfie) and the lovers in the woods keep morphing into fairies. 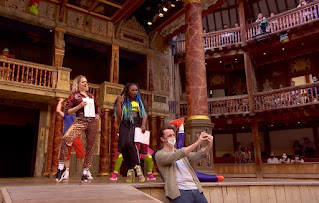 It's hard in this medley to pick out a man-of-the-match, but if there is, it's definitely Peter Bourke mesmeric as Oberon, the ultimate magician in the crazy mess-up summer dream. He brings overtones of Prospero to the drama, which is quite some feat when everyone's dashing about looking like a party popper. Director Sean Holmes has done something quite amazing here: it trampled over all my preconceptions, and deeply-held interpretations & I loved every minute of it. images my screenshots. 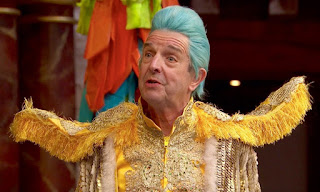 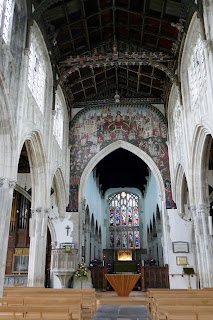 Another highlight of the week was a trip to Salisbury to discuss the front cover of my upcoming collection of short stories with the commissioned artist, Helen Look. This level of involvement in the finished product is a rare treat for an author, and also became a chance to look around this historic city which I've previously explored little further than the Playhouse. Even more impressive than the cathedral, set amid long green lawns with intermittent sculptures and bordered by enormously tall trees, is the nearby church of Thomas a Beckett. After his martyrdom in 1170, Thomas became a cult hero and the city's first church in 1220, predating the cathedral, was dedicated to him. It subsequently fell down, and the 15th Century replacement has splendid stained glass windows which are upstaged by the enormous and detailed painting of Judgement Day, showing the souls found unfit to enter the pearly gates being dispatched by devils to Hell. Several appear to be clergymen, with a bishop clearly evident at the bottom. 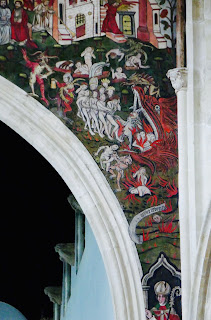 Back in Frome, sunshine and the relaxation of national regulations have allowed live music to return, and open-air gigs are already anticipating next month's festival. The Tribe, an amorphous group fronted by Paul Kirtley with David Goodman, took their rock medley to the beautiful grounds of Rode Mill on Saturday, and played again in Frome's Victoria Park on Sunday, joined by the brilliant Original Barn Finds. Here's the venue at Rode, and the bands in the park - with fingers crossed for more days like these. 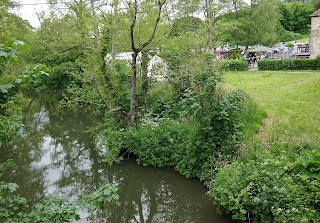 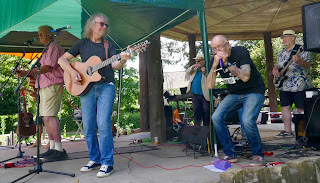 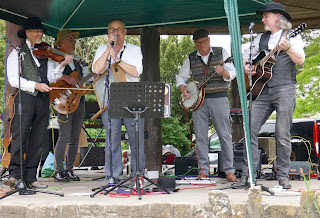