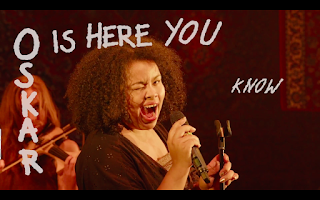 Bristol Old Vic director Tom Morris hosted a webinar on Wednesday to launch the theatre's upcoming season - that's Autumn/Winter, grim thought - and to discuss how the team had coped with the last 18 months of cancelled income and lost shows. Remarkably well, it appears. Aside from the inevitable hardships, Tom's team used the time to affirm creative priorities, accelerate essential change, and devise wide-reaching ways of audience connection that the theatre will maintain, in tandem with live contact, when the pandemic is over.  Their 'engagement programme' throughout the city, currently responding Black Lives Matter, will continue, and the success of Touching the Void enhanced online has encouraged the team to think of adding an online option to other shows.  So the following night I was able to watch from home their current production, Outlier, developed from 2020's Ferment Fortnight and co-produced with performance poet Malaika Kegode and brilliant fusion band Jakabol supporting throughout as she narrates her coming-of-age story based on her teenage years in Devon. It doesn't have the ferocity or raw humour of Trainspotting, but it does have poignant credibility, enhanced by Malaika's confident and connective stage persona and supported by lighting graphics in a party atmosphere: sad as well as wild, this is one the exciting new projects outlined in the season launch. 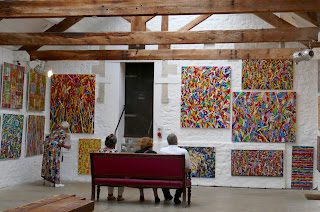 Back now to Frome, for an extraordinarily vibrant art exhibition at the Silk Mill, where David Moss has managed what few solo exhibitors could do: he has filled virtually every inch of this massive hall with huge canvasses, all brimming with vivid colour.  The opening was on Thursday night, and these stunning canvases will be showing throughout next week.

Also highly recommended - but you'll have to wait till the 'Hidden Gardens' event in Frome Festival -  is the superb 'secret garden' in Critchill. I was introduced to this amazing place by Eleanor Talbot, whose Variations on a Theme radio show this week explores its nooks & crannies and discusses gardening and garden design. It's hard to choose a single image to convey the amazing range & display of colour and foliage created by the inspiring couple who have created this garden, but this one, from the far end, may give some impression of the care taken in design, and the vista beyond. And that wild flower area on the left will have burst into bloom by then. 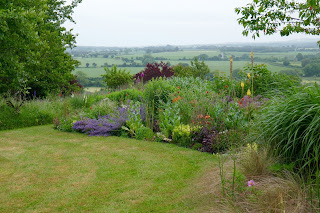 Concluding now with a flurry of music: The Bookshop Band, a talented duo who create songs about books, have throughout lockdown been entertaining online, holding their final concert on Friday. They've crept into this blog before, as their concept originated in Mr B's Emporium in Bath, and Ben & Beth often return from their home in Scotland to perform live - hopefully, one day in Frome.. Here's one of the songs they played: In a shop with books in -which works just as  well with Beth singing. 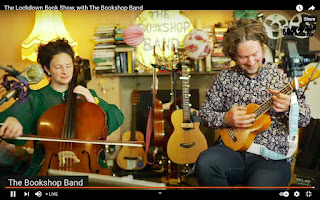 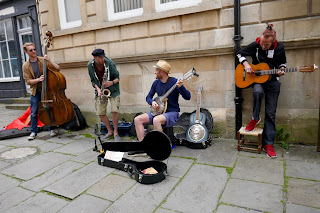 And on sunny Saturday, Frome's popular busker Ron Tree shared his spot and joined in with Luke Philbrick's Solid Gone Skiffle Invasion after arriving to discover a pitch invasion in Cheap Street.
Saturday was until recently the much-longed-for date of the Cornerhouse out-of-lockdown gig from popular local band Back of the Bus, but like the bands booked there for next week's festival, this had to be cancelled. The Cheese & Grain however has more audience-space, and managed to book Get Cape Wear Cape Fly - aka Sam Duckworth - at short notice. It's fifteen years since I fell in love with his first CD The Chronicles of a Bohemian Teenager, and Let the Journey Begin on his second album became the emotional soundtrack of my life. Bristol in September had looked my best bet to catch his current tour, so his arrival here was a brilliant treat. GCWCF is now 35, still looks like a bohemian teenager, and still sounds fantastic. Good support from Frome's Henry Wacey, too. 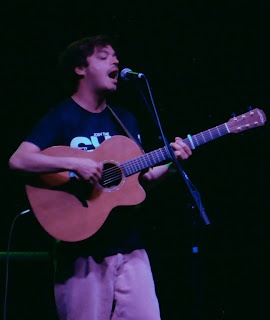