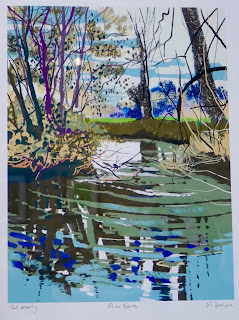 Last Monday celebrated another cautious step forward into community life when Words at the Black Swan poetry group reconvened in the Round Tower to create responses to In Pursuit of Spring, the current exhibition of artworks created in response to the book of that name written by poet Edward Thomas, which you can read for free here or buy at the gallery. Our group discussed the art on show - this is the ipad response by David Daniels, an image of the River Frome which we all liked - and we reflected also where our own personal journeys might take us, with some very moving poems crafted and shared by all the group.

Still in the arty centre of Frome, congratulations to Daniel Musselwhite - who works, usually, in his jewellery workshop at the Black Swan -  for reaching the final of BBC's show All That Glitters. The task for the three stunningly talented finalists was to design and make pearl drop earrings and a bridal tikka. Here's judge Shaun Leane modelling Dan's pearl earrings, and Dan in his Frome workplace. 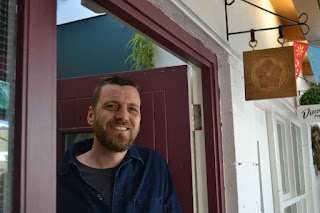 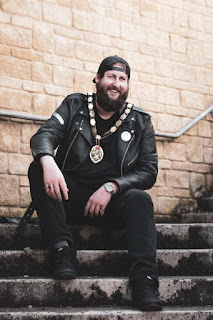 Mega congratulations too, to Andy Wrintmore, here posing for probably the most unconventional official mayoral portrait in history. Andy is Sick Ones' drummer & a tremendously popular figure in Frome, and I'm immensely pleased his talent and energy is represented in my book Frome Unzipped - from Prehistory to Post-Punk, where he talks about his music and his commitment to the town. Supporting him as Deputy Mayor, we now have Sara Butler-Bartholomew, another big personality with high energy. (I'll add picture credit when I find out!)
A change of theme now, with online drama from Stepping Out Theatre Company in Bristol: Pumpgirl by Abbie Spallen, set in Northern Ireland and first performed back in 2006, is a harsh story of drab, loveless, lives told in three separated monologues. A good choice for lockdown production for this last reason, it's also particularly pertinent in a year which has put a public spotlight on women's vulnerability. Danann McAleer is excellent as Hammy, car-obsessed and brutally sexist; Neroli Trammell strong as his emotionally unstable wife, with Emma Stadon memorable as the vulnerable pumpgirl who feels gratified by his attentions.  The virtual backgrounds are sometimes distracting but this production is an impressive achievement and a credit to the company. 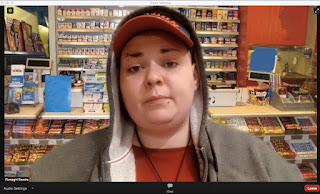 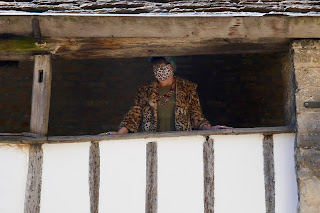 Ending now with some images from local walks, as spring merges with early summer with little cessation of howling winds and rain, but bursts of sun have allowed short sorties: a jaunt with friends to The George in Norton Saint Philip, in 1685 during the Monmouth Rebellion used as headquarters for the rebel army, and in the terrible aftermath used by Judge Jeffreys as a courtroom: these idyllic lawns now being rolled as an immaculate cricket pitch saw hangings in the Bloody Assizes. 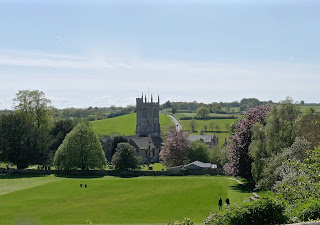 The short (under an hour) walk to Marston Park seems to have become a regular route for me so here again is the lake beyond the bluebell wood, where you can sit with a drink from the tiny bar and look ahead to Frome Festival, only 6 weeks away, when this will be the venue for many of the bands. 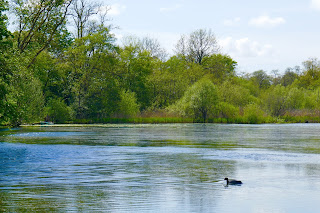 Brochures are out now, and despite all uncertainties and anxieties, their 36 pages are crammed with events : walks and talks, performances of every sort, displays, workshops, and general celebration. As Festival Director Martin Bax explains in his welcome letter: We thought we might produce a much smaller festival this year. We have failed abysmally.  Don't forget the Poetry Cafe - page 12 - where as well as the quirkily egalitarian open mic, you can hear wonderful Liv Torc - the Best Fest Guest in the West.