When 'normal life' is exciting... with fingers crossed... 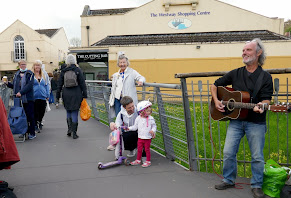 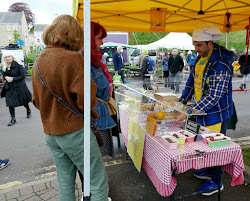 Frome last week was abuzz about the return of the Saturday Market, a proper outdoor do with stalls selling everything from carved curios and tantalising jewellery to garden glories and amazing edibles - here's Liam's Cake Stall offering scandalously delicious vegan specialities.  Stoic local buskers Paul Kirtley and David Goodman were on the bridge to enhance the market yard browsing experience, too.

Across the town in Merchants Barton, the ongoing debate on the Saxonvale development moved  forward with a weekend-long presentation to the public of the preferred project, described as "an exemplary development on the banks of the River Frome, meticulously designed taking the historic grain of Frome as its starting point and delivering a characterful, vibrant, residential-led mixed-use community, with flexible commercial uses, high-quality public realm, and homes for all ages." It really does look what Frome needs, and local enthusiasm is high (especially for the lido.) 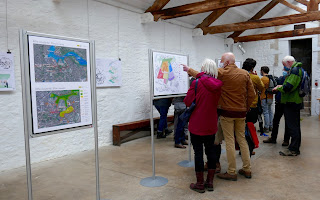 Also in Merchants Barton, the car parking space has been embellished by a project to raise awareness of Mental Health Awareness Week and to further highlight the need for creative development of the Saxonvale site.  Photographer Tim Gander shot pictures, which have been paired with poems and comments from users and staff at Mind in Somerset. Tim's aim is to highlight "what happens when a former industrial site is left to deteriorate. Fly-tipping, vandalism and natural decay take their toll" and his project has much to commend it, but it is worth remembering that the abandonment wasn't all negative: birds and wild flowers flourished among the trees and the old buildings were a prime site for the ingenuity of young street artists as Frome's graffiti Hall of Fame... here's a sample: 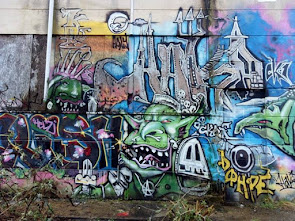 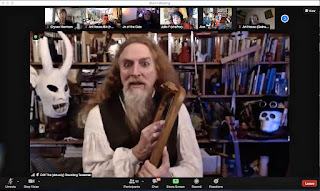 This week's zoom drama is Transition Tales from The Travelling Talesman, promoted by  the Art House Southampton with the tagline 'When gender fluid gods saved creation...' Not only in Greek mythology but in cultures across the world, deities changed gender as well as species, and his transformation tales ranged from the same-form duality of Hermaphroditus to flowers (Hyacinthus, remade in blood and tears), stars (Ursa major & minor) and in the unfortunate case of Actaeon, a stag promptly torn apart by his own hounds. Zeus had a particular penchant for metamorphosis, apparently, seducing his many lovers in multiple forms such as as a parrot, a pig, and a shower of water. Although this talk clocked in at 2 hours 20 minutes, the chronicles never flagged and the zoom audience was enthusiastic and articulate: the chat line was really interesting, posing questions like How does root sex work for fungus? (the answer is mitochondria) and comments on the gender of quabbatic numbers. Performances like this, with an option for audience participation, are as valuable for community health as Open Mic poetry online sessions, and hopefully will all outlive the pandemic and continue to zoom. 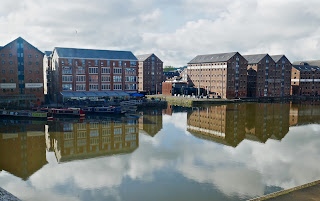 My week ended excitingly with a train journey to Gloucester, taking advantage of new freedom to meet my publisher and iron out various issues relating to my upcoming short story collection: not only a useful visit but a delightful one, as we had time to walk around the docks - which are beautiful - and the older parts of this odd, somewhat bedraggled, city.

Relics of medieval buildings, religious and secular, are everywhere, though mostly overwhelmed by modern build, but there seems to be a will to reclaim civic history more effectively. There are quite a few boards explaining the history & context of some features - there's a storytelling bench designed by the master mason at the Cathedral in 1999 - but there's not much street art around the city. This alleyway, however, has been turned into a Van Gogh art gallery, with posters of the artist's final works all along the hoarding,  in a designated 'covid friendly outdoor exhibition.'  There are some interesting curios too, like the team of clock bellringers above the old woodwork & jewellery shop, the new gargoyles on the cathedral, and even the unpretentious centre of the old town where road signs to Eastgate, Southgate, Westgate, and Northgate once referred to the old main roads London, Devon, Wales, and the North - as shown in this 1805 map: 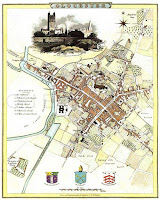 This was a week when summer came in starts and stops, rather like everyone's social plans, and a busy one for me: the deadline date for my quarterly round-up of drama in the southwest for Plays International (amazingly, and encouragingly, there was much to report even though not a single production was live), a restarted writing group, new fiction project underway, and sense of renewed freedom.  I'll end with a view of a sunny walk along the river path from Frome to Great Elm. 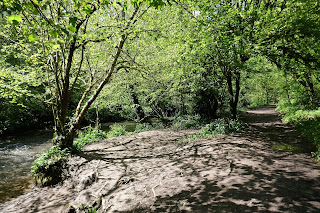