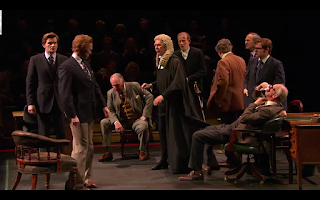 Let's avoid the politics of realtime and open with the treat-of-the-week for lockdown theatre fans as National Theatre streamed their 2012 production This House, written by James Graham, directed by Jeremy Herrin:   2 hours & 40 minutes of fast-moving, well scripted, engagingly acted, brilliant drama - funny and edge-of-chair tense by turns, entirely set in and around the Whips offices in the Houses of Parliament. As well as a gripping account of the turbulent five years of government in a hung parliament from 1974 until the draconian years of Thatcher, the play shows the mini-dramas and learning curves of each character, and what stays with me most of all is the final moral dilemma: would you sacrifice your party's future to save a man's life, probably only for one more day? Is retaining your human compassion more important than loyalty to your political tribe - even if it will mean they lose power and the entire nation will suffer when the self-seeking opposition with their harpy leader take the helm... ? It's a tough call.

With hindsight, though at the time she shocked me, I tend to agree with the most ruthless Whip of all, Ann Taylor, (Lauren O'Neill) who favoured calling in the sick MP to make up their essential numbers in the vote, and snapped back at appeal 'He'll die!' from Bob Mellish (Phil Daniels) with 'He'll die happy.' Strong comedy scenes too, with some reminiscent of the Riot Club in POSH - the public-schoolboy-mentality satire, as the Mace is hauled from place and swung around like a caber in an inter-party brawl. 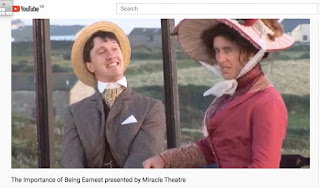 Miracle Theatre also dug into its 2012 archives for this month's Monday streaming for The Importance of Being Earnest and I wish they hadn't: it's impossible to improve on Oscar Wilde's elegant wit in this satire of society manners and values. Making key characters clumsily buffoonish, transposing speech from master to servant, and decorating the action with silly dances and yoga poses is a directorial misjudgement, even for an Open Air Theatre Company with an eye on the kids in the audience, which perhaps explains Ben Dyson's unusually unimposing performance as Aunt Augusta.

BBC Radio 4 programme The Spark, where 'Leading thinkers posit solutions to the structural problems of our age', featured Frome's Peter Macfadyen last week, discussing the impact of the 'Independents for Frome' invasion of the town council in 2011 with a brief to revitalise local politics.

'I've never been a member of a political party,' Peter explained, '- they clearly don't work. They create an environment of conflict and a system that's dysfunctional. We just wanted to do something that would work.' Once Peter's motley group of wanna-be game-changers had taken every ward in the town, they were able to start changing the status quo, abolishing sub-committees and generally making procedures more informal and understandable. In a very honest summary, Peter remembers problems and regrets as well as successes and the growing interest, in UK and abroad, in the Flat-pack Democracy ideal. Here's Peter in one of the home-made chains of office donated to him as Mayor - so many and so diverse they featured in an exhibition at the end of his year in office - here's just one.

Also words: with no live audiences available, indefatigable poet Liv Torc has created a poem for the Radio Somerset website: You Make A Difference. As mentioned last week, Liv continues to collect and compile 'haiflu' reflecting feelings about lockdown, posting a film of a selection at the end of each week ( Week 10  here).

With literally months of lockdown dominating life, it seems weird to now report on a music event in real time. In an ingenious feat of engineering and after consultation with his neighbours, soundman Steve Tomkinson set up a trio of Frome's musicians to perform at the front of his house to a - social-distance-meticulous - live audience. Paul Kirtley's version of Tom Petty's famous Breakdown song as Lockdown and Bob Dylan's You Ain't Going Nowhere (with a few pithy comments about Durham) were supported by fabulous guitar riffs from David Goodman and Carl Sutterby's evocative harmonica. A blast of normal energy in our strange, static world. 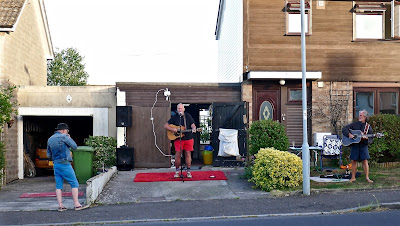 And after a weekend of solid sunshine touching 28 C here in Frome  - that's 82.4F to you Mo - these May bulletins will end with some glimpses of the scandalously lovely scenery around Frome last week: the proliferation of birds, bees, butterflies, sunshine and serenity, all contrasting irreconcilably with the 'reality' on our TVs and phones in these strange days. 'Stay well' is the new goodbye. 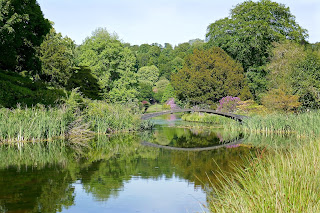 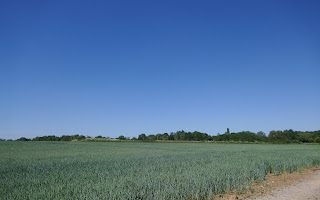