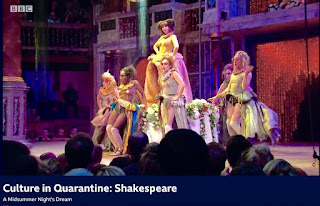 Midsummer Night's Dream at the Globe from 2016 was directed by Emma Rice, ejected ultimately by the management for taking too many liberties with the bard's words and using too many light bulbs, but this joyful production has a fabulous atmosphere of enjoyment and excitement. Even the textural changes - the mechanicals are hospitality workers, Helena becomes Helenus - seem like shifts the playwright wouldn't have opposed.

There's big emphasis on audience involvement: indeed the lovers emerge from the auditorium, and return there to watch the cameo comedy piece that concludes their happy-ending weddings.

It's a high energy performance throughout, and - unusually- the fairies steal the show, in a bold move to extend their role massively with song and energetic dance in fantastic costumes, which brilliantly succeeds. 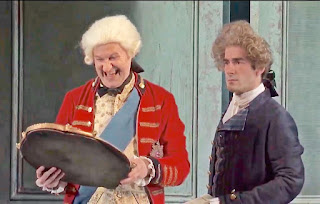 Another real treat on screen this week: The Madness of George III from Nottingham Playhouse, directed by Adam Penford with Mark Gatiss unforgettable as the crazy king during his most renowned episode of mania, made famous by Alan Bennett in this exploration of the political machinations of his supporters and opposers while doctors vie for kudos, his heir gloats, and Mrs King weeps. Nicholas Bishop's doggedly dour Pitt is outstanding but in my Unpopular Opinion, as Greg James would say, casting women as his Whig rival Fox and the posse of royal doctors creates a kind Carry-On squabbling comedic tone that weakens the sense of terrifying domination - you have until 28th June to watch and disagree... 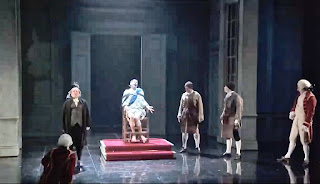 Interestingly, this 1991 play is credited with establishing the theory that the monarch's breakdown was caused by porphyria, by emphasising the blue urine of that condition as an early symptom of George's behaviour changes: in fact, this was only noted after he had been treated with medicines derived from gentian, also used as a blue dye, and he was more probably bi-polar. 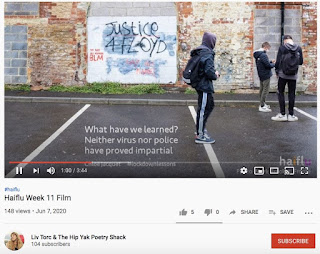 This seems a good time to take another look at Liv Torc's eclectic chronicles of lockdown days in 'haiflu', collected weekly and distilled into short films, link here. These collections combine to create a poignant and compassionate story of these strange days: glimpses range from momentarily forgetting the use of an actual coin, to reflections on painful international preoccupations. This initiative has proved an inspiration, compiling social history that's 2-way accessible and egalitarian.  Liv's amazing contribution to wellbeing and creativity throughout this time has been recognised, too, as she has been selected as one of four Cape Farewell Siren Poets, with a two month commission to 'creatively communicate climate change and the solutions in the new Covid world'.

Still with words on Sunday evening with Head in the Clouds from Pound Arts- a one-time-only opportunity to see and hear some of the genius wordsmiths who would this summer have been headlining poetry gigs with their wit, wild imagination, and powerful performances:

from weirdness like Byron Vincent striding the streets insisting Eamon Holmes is a breakdancer and the marvellous dry humour of Rob Auton ("I like faces. I like faces so much I've got one at the front of my head") and to Henry Normal extolling the joy of a cup of tea, with Luke Wright, Jonny Fluffypunk and of course Somerset and Frome's Liv Torc - these amazing short films are all now available here - enjoy, and support your favourites by buying from their websites.

Frome's Hunting Raven bookshop - announced as award-winner of South West Bookshop Of The Year 2020 just before lock-down - will reopen from this Monday, and dynamic manager Tina Gaisford-Waller explained the reassuring safety measures in place during the bi-monthly book group meeting which has continued on Zoom. Proof Pudding Club is primarily a review group for proof copies of new titles, but this Sunday night's session also included a chat from Elspeth Dougall - Head of Sales for Independent Booksellers at Penguin Random House. 'What sells a book, marketing or luck?' was a question Elspeth answered frankly and surprisingly with the latter option. 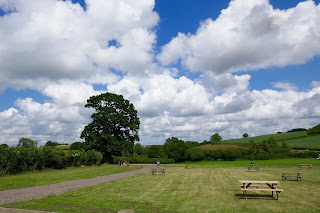 Concluding this week with an image from Tuckers Grave, one of the recreational outdoor spaces we may soon be allowed to visit, and a shout-out to YogaBen whose demo sessions have given me a semblance of sane routine into the timeless days of the last three months.
Posted by Crysse at 11:30 PM