meanwhile in a quiet corner of the world...

Much Ado About Nothing directed by Christopher Luscome in 2014 is another of the great Royal Shakespeare Company productions now streamed for home viewing, and it's another goodie. 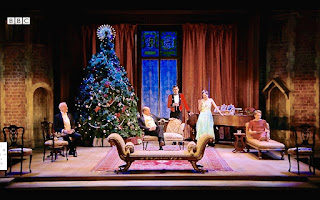 With its 'inciting incident' of trickery and deceit this can be a difficult play to consider a comedy, but this version focuses on the suggestion of the title: it's all just 'much ado'- banter and teasing and titillation ('no-thing' in Elizabethan days was slang for a woman's vagina) until there's one trick too serious, and the insecure young lover, only a day back from battle, reacts by reverting to conflict stance - but only till the trickery is unwound by the buffooning guards on watch. These 'low-class' caricatures are often the weakest link in the bard's comedies, maybe because there's less enthusiasm for ridiculing the disadvantaged in society now, but also since Shakespeare didn't fully script these scenes, allowing his comedians like Will Kempe (who played Dogberry in the original production in 1598) to improvise on the theme, and no copies of any of the plays emerged until 1623 - seven years after the playwright's death. 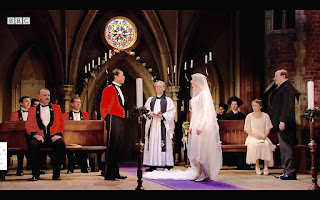 These extended parody scenes slightly weaken the suspense of the plot, but we know it will come right in the end, and the overall performance is a delight. Sets and scene changes are superb, from glamorous to grandiose, all offering ingenious opportunities for the eavesdropping that moves each plot along, first salacious, then serious, and ultimately revealing. Setting the entire story in 1918 works well for both the class divide and the heightened emotions after a war, and the cast are all excellent.

Live  on Zoom - an intimate performance with each member of the audience individually ticketed, a one-off performance, never repeated in quite the same way... that's what Fuel Theatre offers with their show Love Letters Straight From Your Heart, and the innovation definitely seemed worth a look. From 20 May to 26 June, Bristol's  Uninvited Guests are offering an hour of readings from love letters - your love letters.

Hosts Richard and Jess are personable and charming people but that is literally the extent of the show: they read out emails from night's audience and play their chosen track, even if it's Que Sera, Sera, while smiling kindly into the camera. If you want to have a go, probably best to do what I omitted, and send your own letter & song request, then you can leave the once it's over as many clearly do: the 'watching' number dwindled before the end.

Story Friday in Bath posted another excellent batch of short stories on Friday, chosen by organiser Clare Reddaway and presented by the Kilter Theatre team.  Some tales took the current situation as their theme - Making a Mask poignantly and Flouting with an unexpected twist -

and I also really liked Zorbing, a powerful image for a personality in crisis (by Chiara Vascotto, read by Alice Barclay) and Casting with WB Yeats (by David Mathews, read by Adam Fuller), lyrical and with a delightfully satisfying ending. An absorbing collection, well worth a click to hear these and browse the archives too.

A new collection of poetry, Two Girls and a Beehive, from Rosie Jackson with Graham Burchell, had a Zoom launch this week: sadly my laptop curtailed my connection with an overheated hum, but there's a Youtube taster here.  Both poets share a fascination with the life of Stanley Spencer with his wife Hilda and these poems aim to explore and illuminate their lives and art.

June is usually the month when Frome Festival preparations step up a gear, with the brochure out and rehearsals & promotions under way... so it feels reassuringly normal to see creativity around town being promoted - even though the Frome Art Trail is a virtual one this year.

All of the 51 artists represented have websites you can see direct from the link: an impressive display of diversity, skill and talent. Big appreciation to the team who compiled this, led by Kate Cochrane, whose landscape paintings include this view of White Sheet Down.

Ending this blog in a week when anti-racist riots and virus crises both move closer to our home town, with a quiet moment on the walk across the fields and through the woods to my weekly writing group session. 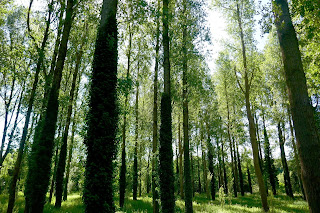