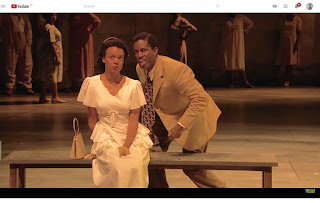 Small Island, the National Theatre production staged last year, is an especially timely offering for streamed viewing, not just as a shaming reminder of recent treatment of families of those 'Sons of the Empire' lured to post-war Britain, but also with the current spate of retrospective sensitivity about historical terminology: as the producers put it "Please note that, as part of depicting the experience of Jamaican immigrants to Britain after the Second World War, some characters in the play use racially offensive terms."  Andrea Levy based her 2004 novel on her own experience of growing up in London as the child of Jamaican immigrants: it won several major book prizes and was picked by The Guardian in 2009 as one of the defining books of the decade

As in the book, the action of the play moves across two continents, and the minimal set changes plus effective lighting effectively convey Hortense's culture-shock as she relocates from a sunny small island where she could consider herself both British and middle-class to a chilly, damp, small-minded island bereft of respect for her qualities and seeing only her skin. Online till 25th June, well worth watching.

And there was another dream of midsummer magic at the Globe this week, with a 2013 production directed by Dominic Dromgool three years before the Emma Rice extravaganza reported in my last post: a more traditional version of Shakespeare's drama with the fairies a darkly ominous presence in a world where mortals, both noble and lower class do all be fools in their desires and their passions.

Renaissance costumes and more traditional staging both work well for this interpretation,  the adolescent immaturity of the lovers explaining their passionate tempers, and the merging  between the mortal and fairy overlords also fits this interpretation of the drama.

Matthew Tennyson plays Puck as a wayward and dysfunctional teenager - he won an award as 'best newcomer' - and the mechanicals adlib, mess about, and shove the chaos of their 'Pyramus and Thisbe' play to the limits of absurdity.  The audience clearly loved it all. These streamed shows have definitely made me avid to book live tickets for Globe's pit as soon as it's permissible.

Poetry corner again features Liv Torc, this time as hostess of the Take Art supported Rainbow Fish Speakeasy sessions - the next one in September will presumably be back in Yeovil, so this has been another zoom benefit for me.

Crammed with great contributions, this featured a totally brilliant headline set from Bristol rapper Dizraeli who introduced us to city characters like John the Baptist and Ben who sleeps under the railway bridge. Other poems ranged from powerful reflections on current issues to Mary Dickens' list poem 'I am returning this item...' compiling suggestions she felt more useful than the usual options, and the event ended with an audience-inspired poem entitled The cake of human kindness - congratulations deserved by all. 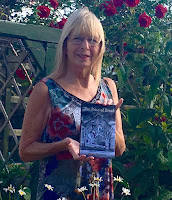 And my personal congratulations to John Chandler of Hobnob Press for lightning-fast turnaround of my error-strewn pdf into a proper-looking proof copy of The Price of Bread - already in his listings and pictured here in my hands, in John's very smart cover design featuring art work by Frome's marvellous Mutartis Boswell. If you dipped into this blog at the end of May you will have seen the image already, rather more clearly, and if all goes well for me, it will probably feature here again... 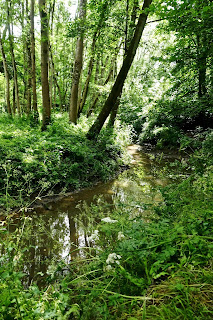 In the meantime, back from 1970s Belfast to 2020's Somerset summer glory: walks through fields of ripening corn and along river banks where bees and butterflies this year are abundant - one of pleasanter outcomes of lockdown.