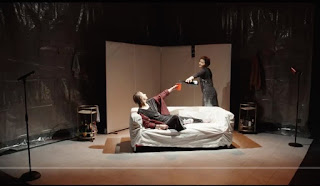 The Great Gatsby by F Scott Fitzgerald is an acknowledged classic, a novel with prescient awareness of the social cruelty inherent in the rampant materialism of 1920s of post-war America. The theme and the plot are contained in one of the last lines of the book: "They were careless people, Tom and Daisy—they smashed up things and creatures and then retreated back into their money or their vast carelessness or whatever it was that kept them together, and let other people clean up the mess they had made.

"   It's a great read - a story by a man about men fighting over their status and over their women, quintessentially a tale of male rivalry set in a landscape of that luxurious, careless era. So you wouldn't expect two women,  with basically a settee as their set, to create the entire story so evocatively, powerfully, wittily, and movingly. Although as this production is from Bristol's  Wardrobe Theatre, you probably would.  Tamsin Hurtado Clarke and Jesse Meadows take on every character in Scott Fitzgerald’s novel to evoke the doomed romance between Daisy and Jay Gatsby as seen through the outsider eyes of Nick Carraway, often role-shifting several times in a single scene. They’re helped by excellent filming and music, and a set that, like the story itself, evolves from its frenzy of self-indulgent hedonism into violent chaos. Director Tom Brennan with director of photography Jack Offord & their teams filmed it all live in January, and you can book here to see the performance until the end of March - recommended. 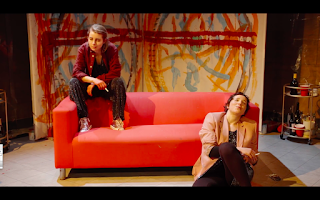 Also now streaming, Hymn at the Almeida is another two-hander but a more traditional and weightier affair: the story of two men who shared the same father, written by Lolita Chakrabarti and dealing with Issues with-a-capital-I, like parental responsibility and race and policing, with much weighty dialogue. Despite the fact that the actors actually shared the set, they were filmed separately for 99% of the story, so although Adrian Lester and Danny Sapani were very good, the sense of their interaction was disappointingly absent. Directed by Blanche McIntyre, here's a screen shot of a rare lighter moment. 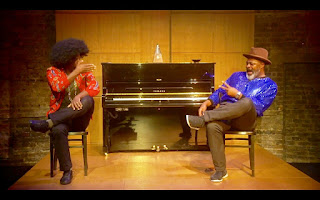 Another of those of Best-Place-To-Live polls has revealed once again, that the top town in Somerset is Frome, for its 'arty artisan indy businesses and cafes' - let's hope they all survive the shutdowns. River House on the bridge is enterprisingly taking orders online for speciality donuts.  And fittingly for our notoriously dissenting town, Frome's own Tolpuddle Tree, a descendent of the famous Tolpuddle Martyrs' tree in Dorset, has been planted in Rodden Meadow exactly 187 years after the original memorial - Julian Hight, Frome's Mister Trees, gives more of the context and tells the story here.

A brief note on visual arts now: Banksy, Bristol's most famous 'unknown' son (also a friend of several street artists in Frome) featured on TV last week in an excellent documentary Banksy and the Rise of Outlaw Art.  Sadly this isn't available online in this area but if you missed this inclusive look at how art was reclaimed from the investors and returned to the people, you can take a look at this short trailer.

And finally, poetry corner: Winter Warmers is a collection of seven heart-warming poems supporting pubs in a difficult year by celebrating their role in within their communities. Bristol poet Malaika Kegode performs the poem for the South West, and also don't miss Steve Pottinger representing the Midlands with The Best Pub in the World.  Over in Bristol, David Johnson, always a well-received guest at Frome Poetry Cafe, featured on a zoom event on Saturday at which the highlight for me was his reverie as Edward Coulson tipping into the Bristol harbour ("only a quick dip / no time to dive").  And looking ahead to June, the brilliant news is that Frome Poetry Cafe will be joining the town's Festival celebrations with an event on the ECOS amphitheatre - note our fantastic guest Liv Torc, and get the details in your diary now! (Thanks Suzy Howlett for the flyer) 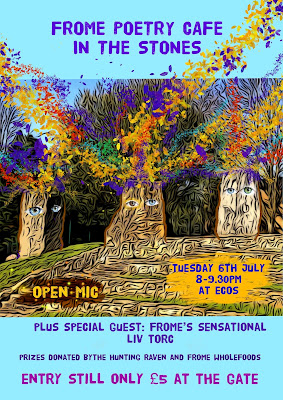