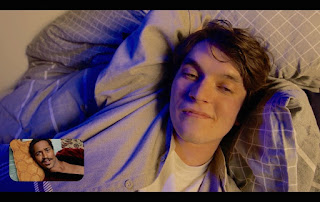 When Oscar Wilde submitted The Picture of Dorian Gray  in 1890, his editor quickly decided there were “a number of things which an innocent woman would make an  exception to,” and set about purging the novel of any inference of homosexuality.  There was a lot to do, but even with the throbbing veins of passion stripped, the novel was still decried as vulgar, unclean, poisonous, and discreditable, and it wasn’t until 2011 that an uncensored version was eventually published, by Harvard University Press. Wilde's moralistic fairytale has a timeless fascination and has been repeatedly adapted for stage and screen, currently in a  star-studded co-production which acknowledges the sexual passions saturating the story but steers them vividly into contemporary life. 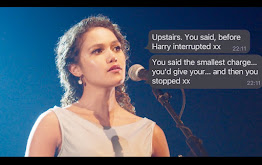 Dorian (Fionn Whitehead) is a student in lockdown at a university where Harry Wotton (Alfred Enoch) is a trendy 'expert', Basil (Russell Tovey) is a software developer and the beautiful Sibyl Vane (Emma McDonald), innocent fourth figure in this tragedy, remains as Wilde envisaged an aspiring actress. They're all excellent in their roles, and so of course are Joanna Lumley and Stephen Fry, slightly underused as Lady Narborough and an interviewer in a version that begins at the end of this dark saga, interrogating the story of Dorian's downfall with techniques from contemporary entertainment as well as stage theatre. The perpetual beauty granted to Dorian exists only online, where his images most matters to him, which is why he dumps Sibyl after her onstage freeze in this retelling of Wilde's fantasy.

The digital sequences of cyber assaults aren’t just gizmos, they evoke the social wildfire of vicious glee that Oscar Wilde’s trial and conviction had aroused in the 19th century. For Lady Narborough and her social acolytes in this contemporary version, homosexuality obviously isn't an issue, but in an era when status exists largely online, fear of humiliation is tightly integrated with social media presence.

Written by Henry Filloux-Bennet and directed by Tamara Harvey, with a raft of co-producers and partner venues including Bristol Old Vic, this unusual and gripping production is available until the end of March, tickets £12 here, recommended especially to everyone with an interest in the future of theatre in a digital era.

Donmar Warehouse, like many theatrical organisations, is using initiative and internet to maintain a presence for its supporters - over 1000, many in USA,  joined the audience  for Assembly on Youtube on Saturday night.  The 'assembly' has been gathered to imagine the future, and like many of us fails to grasp the range and dangers of the concept.  There's a kind-of childlike simplicity about the storyline, demonstrating how humans can't conceive complete apocalypse so that when the animals' needs and elements's tendencies are involved too the problem of survival becomes acute... maybe this is one for the family to watch together and discuss, though it could be trimmed in duration. This live digital performance is written by Nina Segal, directed by Joseph Hancock, and realised by the Almeida Young Company & the Donmar Local Company. 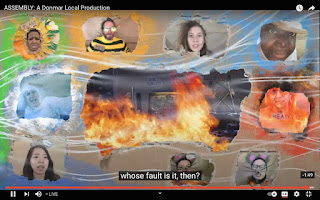 Mark Thomas, that maverick campaigning comedian who is anti-establishment in an active disruptive way, went on Youtube on Tuesday evening (only) with some 'Vintage Cuts' from his Comedy Product, summarised in his promo as "Stand up, stunts, stories and general transgressive behaviour." Mark, with intermittent comments from his producer, Geoff Atkinson, reminisces on some of his most outrageous escapades as filmed and also as narrated to club audiences over the years - and gives updates on outcomes to some of his social protests. Running for nearly 3 hours and with much topical material requiring explanatory context, this was quite a marathon but Mark has never been deterred by difficulty and the clips he chose, including club performances as well as the stunts, kept the show fascinating throughout.

From setting up a PR stall at an Arms Fair and teaching attending fascist tyrants relaxation techniques (and filming their consequent confessions of use of torture) to chasing up lax regulations around nuclear fuel transportation, Mark has a zany plan to confound any ruthless or incompetent authority. His causes are all issues worth challenging, and they make for good entertainment as Mark doesn't do subtle. 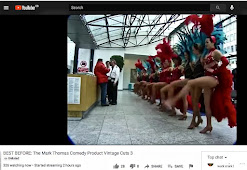 He takes a hot-air balloon trip to Menwith Hill to reveal a spy base and a troop of dancing girls - The Showgirls of Truth - to the House of Commons to discuss matters with their MPs, and he taught the Essex Fire Service how to use a referendum to prevent further cuts in their service. It's a pity Mark couldn't have blown in with cutting-edge paperwork and feisty women to prevent last week's rushed-through legislation banning public protest in the UK, as we take another step to line our country up beside the rest of the fascist states.

At least in Frome, the long history of protest against unfair legislation in England is still alive: enjoy this remaking of Money For Nothing by Martin Dimery (Green Party county councillor) with musical arrangement from David Hynds, video by Patrick Dunn. The adaptation (- with a PPE) is bitingly on point and the visuals superb - the final image, of an exhausted medical worker, is genius. 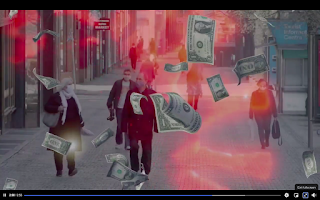 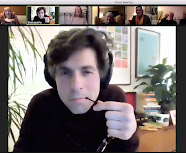 Still with words: a soothing blast, if oxymoronic imagery is allowable, of narration from Bath's Kilter Theatre which in collaboration with A Word in Your Ear is offering Storyopathy, a unusual contribution to lockdown entertainment conceived by Clare Reddaway. "Doctor" Olli leads a session antipathetical to the usual stress of zoom and, although his character's persona is entertainingly parodic, really did create an ethos of  the age-old magic of story-telling with Message in a Bottle by Derek Williams on Thursday.  As one who usually reviews projects from an audience perspective only, it's great report that my story The Invisible Granny is on offer next week: bookable here. 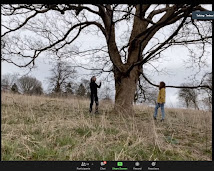 Meanwhile in Frome... nature-watch groups are alert not only to enjoy the buds and birds but also to counter insensitive human invasions. Friends of Easthill Field are campaigning to retain this ancient undisturbed parkland, and on Friday a zoom group discussion featured a film of tree expert Julian Hight explaining to Terésa Hadland why Easthill is particularly valuable. As this open landscape was established around 1830, its elderly trees have reached their most valuable stage, housing over 2000 species of insects and 300 species of lichens as well as providing home to barn owls and other protected birds. A fascinating and informative session. 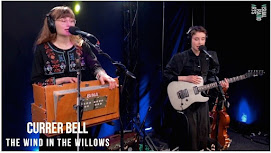 Music, now: "Somerset's best kept secret" according to Phil Moakes interviewing the duo on Visual Radio Arts last week, Faron and Merle perform as Currer Bell.  Brontë fans will note that this was the pseudonym chosen by Charlotte to overcome Victorian prejudice, writing "I am at a loss to conceive why a woman should be censured for writing anything that would be proper and becoming for a man"  This impressive alt-folk duo consider themselves '21st century Victorian philosopher witches' were homeschooled and "often felt like modern Brontës, living on a windy hill and spending our days in the company of books and made-up characters." Like the Bookshop Band, also nurtured in the south-west, their lyrics are often inspired by literature. The Wind in the Willows (36m 40s in) is their take on "the book you're never too grown up for." See what you think... and thanks to Phil Moakes and Maggie Gregory for maintaining VRA, Frome's unique free visual-sound live sessions, an opportunity for bands to self-promote and for music fans to enjoy some of the best sounds around. Meanwhile in the real world there's sad news from the Grain bar that won't be a Roots sessions restart - thanks to Domenic DeCicco for all the good times there - but the Cornerhouse has promised live bands at the July Frome Festival - event submissions are now all in, and the line-up will be published soon...