Gathering and spottering and a bit of puddling 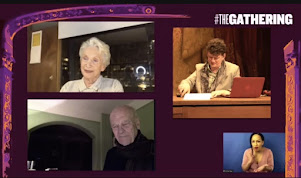 Once again, a week with a nice example of the resilience and ingenuity of theatre-makers in the longest nationwide closure since the ban in 1642 which lasted more-or-less until the Restoration - although bubonic plague in 1593 had chased live performance out of London for fourteen months, if you count that.  Bristol Old Vic is one of the theatres providing lock-down dramatic entertainment online until literal doors can open again.The zoom Gathering on Thursday, hosted by director Tom Morris, was carefully planned to include new as well as remembered acts, with a balance of age and gender, and to create a sense of committed friendship within the walls of 'The Theatre Royal', as aficionados still describe this playhouse. 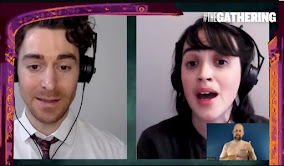 The theme was love, shared in poetry (Michael Byrne reciting Yeats' Song of Wandering Aengus was one highlight) and song (the superb Audrey Brisson, who chatted about her baby, also called Amalie) as well as by memories from past productions. Every performance was accompanied by one of 2 sign language interpreters, both of whom enhanced the acts by their vigorous enthusiasm. Final guest Louis Maskell joined Audrey for the Beauty & the Beast duet from The Grinning Man, which must have been a technical nightmare but sounded great. (As a footnote, a bootleg film of the original production, which this blog raved about in 2016, is viewable for less than the cost of a fish & chips, and you can get a 5-show boxset for unlimited viewing for half the cost of a bottle of fizz. Just saying!)

Also under the heading of 'theatrical thrills', keep an eye next week, when the embargo on reports of an exciting new production of Dorian Gray is lifted... (image of Fionn Whitehead by Aaron James, for this co-production by the Barn Theatre, Lawrence Batley Theatre, New Wolsey Theatre, Oxford Playhouse and Theatr Clwyd. )

And a recommended addition to your BBC iplayer downloads: - Franz, a story of two families struggling with the aftermath of WWI - this may may you weep but remains unpredictable right to the end.

This was a week when springtime became more visible, and hopes of real-time connections were enhanced by plans for a summer festival and band-dates in Frome, with Black Swan Arts hopeful of reopening soon, and the popular River House Cafe team leaving their premises on the bridge to join them there. The Frome Wildlife Watch group has been practically flooded with otters, now frequently spotted along the town river (video here from the phone of Oliver Wright) and the other major news this week was the siting of a White Tailed Eagle by member Julian (Bugsy) Hight - re-posted here with his permission - a bird not seen in England since 1810 when the last one was shot, but recently re-introduced to the Isle of Wight.

This one seems to have decided that Longleat was a better residence - probably attracted by the number of ancient trees and wildlife in that estate. "Rewilding is happening in unexpected places" Bugsy reports encouragingly.  Primarily known as the champion of Frome's trees, he's created on commission from the town council this short video to tell the story of Selwood's oaks.  Oaks grow best in solitary positions: It's a popular misconception that Selwood Forest comprised dense thicket, as in fact 'forest' was the land the commoners lived on until hunt-mad William the Conquerer invented land ownership and claimed vast swathes for his deer. Nick Hayes' excellent Book of Trespass explains "Under Anglo Saxon rule these tracts of land were recognised as the vial source of subsistence for all peasants of the area ... commoners had rights not just to graze their cattle and pigs, but to take wood, dig peat and gravel, and fish the ponds. For the first time in English history, the commoners and their cattle were barred from the land they used. These areas became known as 'forest' from the Latin foris meaning outside of because they were areas that operated outside of common law."  Next time you visit a stately home and wonder how the family came to own it, you can remind yourself that they just did what William did: they took it from the people who lived there.

Ending this week's doings & musings with images of the river Frome in two different moods - bubbling down to join Mells brook at the sunny start of the week, and lethargic along the disputed footpath at the end of the week. 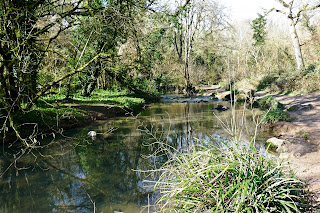 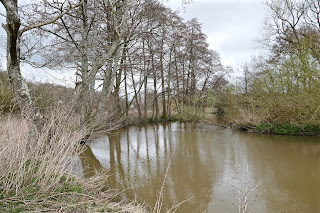