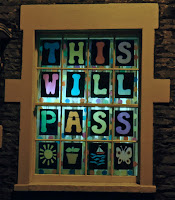 Things to do as February ends: Well, if you live in Frome, you could do what over 200 households have done and fill your windows with glowing imagery to create a Window Wanderland. This now-annual event has been extended an extra day, so if you're reading this on Monday you have time to check the map here and enjoy the exuberant artistry: ranging from stunningly beautifully crafted to joyfully expressive, many with profound messages of hope, these are all simply wonderful. Frome was an early and eager participant in this national project - it's ideally suited to our quirky town which has a life & logic often at odds with controlling authorities - viz the news last week of a man posting cash through letterboxes who when interviewed by the police turned out to be just a kind man. The Mail reported the story with a picture of a letterbox for further clarification. 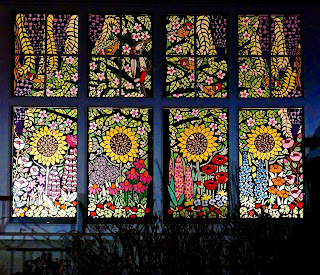 Wandering backwards time-wise now, Tuesday 23rd was the 200th anniversary of the death in Rome of John Keats, attended by a doctor who daily bled the weakened poet (8 ounces at a time) and with Joseph Severn, the friend who had travelled with him on what both knew would be his final journey: consumption, and distress at the vitriolic reviews his 'cockney poetry' was receiving, were killing him. The dying poet and history both blame his critics, but Keats' 'imperturbable drivelling idiocy' is now held by many in the same regard as did Shelley, who had a copy of Keats poems in his pocket when he drowned. To mark the actual hour of the poet's death the British School at Rome premiered Lift Me Up I am Dying, an account of his final days by art historian Pelé Cox, compiled from extracts of letters and fragments of poems. The scrapbook approach makes this lively viewing and highlights the tragic irony that Keats' lucent imagery and sensuous story-telling was offensive to the public-school-educated publishing world. 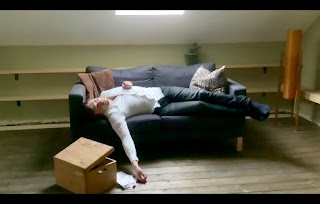 Moving from poetry to fiction: Bath's 'Story Friday' team A Word In Your Ear, led by highly successful fictionist & dramatist Clare Reddaway, has been looking at ways to continue bringing spoken word stories their followers. After a successful series of Youtube stories last year, Clare has again collaborated with Kilter Theatre to create Storyopathy - "Hand-crafted story therapy for when you feel like you’re losing the plot…"  I'm particularly pleased because one of the Storyopathic Remedies written by me: The Invisible Granny will be read by Olly Langdon on Thursday 25 March - you can book here, and it's just the one price for as many of you as can safely & legally fit round your laptop screen.

Now for a Fromie miscellany, starting with The Last Lockdown haiflu collation from Liv Torc, reflecting the upward curve in mood as spring and hopes of future freedom stir. Andy Wrintmore in his new series of The Giant Pod talks with comedian Rich Wilson - and Andy also picks the playlist on Eleanor Talbot's latest edition of Variations on a Theme.
Moving outdoors: Dress-Up Friday, initiated by the wonderful Rare Species Theatre Company, continues to inspire Fromies to strut their glad rags in the streets and shops of town - it's good to have something to mark the passing weeks tbhonest - and Frome Wildlife Watch brings daily reports of encouraging sightings: badgers, hares, kingfishers and otters around the town weir were recent specials, and the bird life is amazing. This is a red kite spotted just north of town and caught on camera for the webpage by Joe Paul Durrant.

It's only a couple of weeks since lakes round here were frozen and after the thaw, acres of land became lakes, so it's great to see blue skies and a slowly returning equilibrium. Chris Packham's Self-Isolating Bird Club is another place to celebrate our national wild life,  with nearly 56,000 members posting delights daily.

And finally: anyone interested in the struggles mentioned last week between Frome conservationists and developers avid to convert shared land into private profit, might like to look at this informative website Who Owns England?  Guy Shrubsole's book of the same name is a good companion to Nick Hayes' brilliant Book of Trespass - and I've also belatedly acquired Robert Macfarlane's Wild Places.  As the Ice Moon starts to wane, we can take heart that the year is mellowing and this time next month will be the start of summer time...