Nearing the end of Twin-Terrors' year 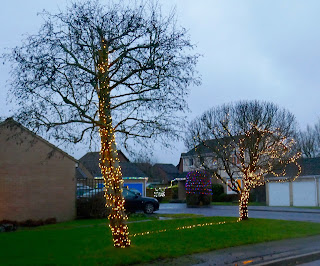 The annual preoccupation with creating a sparkling feel-good factor in the darkest days has had more than usual to contend with this year - in fact, more the average horror movie. My autumn walking routes having turned to sludge, the alternative of wet streets became a chance to enjoy all the illuminated displays: an expression of community hope and a visual delight - if you ignore the planetary damage, of course, but that's true of simply existing these days.
Also in the real world, the big news for the week before Christmas was the sensational return of live music in Frome: Back of the Bus filling 23 Bath Street to legally-permitted capacity for an afternoon session last Sunday, with all the glitz, pizazz, and passionate punky hi-energy performance that we expect from this wonderful septet.  From their funky upbeat opening with You Gotta Have Faith to their awesome version of Hazel O'Connor's anthem Eighth Day - never more spine-chilling than this year - this performance was memorable. Huge appreciation to Lark Porter and all the team at 23 for making this happen. 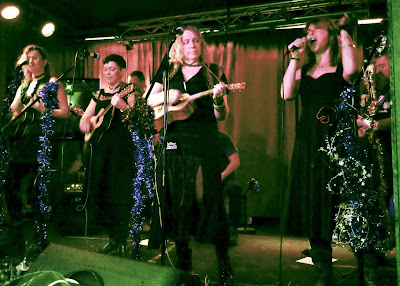 No carol concerts or street singers this year, sadly, but with amazing ingenuity here's a seasonal song from Frome coordinated by Patrick Dunn: 'Carol for the Cabinet from a 'Bleak Choir' of musicians and singers. And do click on this offering from Nick Van Tinteren's Tiny Desk Concerts. 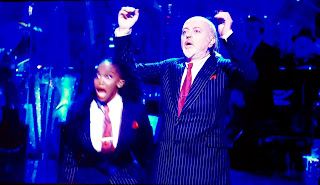 Indoors there was the winter balm of telly, and this season's big feel-good epic Strictly Come Dancing, pulling out all the stops with generous marking and a small but noisy studio audience. This series has had a massive following and deservedly-approving critiques from commentators across the spectrum ... and no-one could have looked as shocked as Bill Bailey and his partner Oti Mabuse when he was revealed as the series winner - great series, great result. 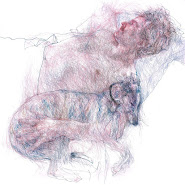 Also on the box, a double treat from Sky Arts (triple, if you count Stephen Mangan presenting) as Portrait Artist of the Year final night not only gave us Eddie Izzard looking splendid in a frock, but also followed the progress of the contest's overall winner,  Curtis Holder, as he created his commissioned portrait of Carlos Acosta, director of Birmingham Royal Ballet. This is now hanging in the Birmingham Museum & Art Gallery, but just as exquisite is this portrait of the artist's partner, which confirmed the judges' final choice. 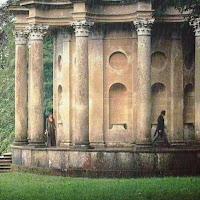 A homebound Christmas left most of us tuning to the tele, rummaging among the repeats & reruns for personal gems: among mine were Grease, now 42 years old but still appealing despite its 'teenage' cast all clearly in their 20s & 30s, and a feisty version of Pride & Prejudice with some emotional scenes shot in Stourhead.
Ending this final post from a year of twin terrors with a poem, which was going to be TS Eliot's soliloquy from one of the Magi, but though beautiful it is very melancholy, so instead here's Kahlil Gibran reflecting on love in The Prophet:
Love has no other desire but to fulfil itself.
But if you love and must needs have desires, let these be your desires:
To melt and be like a running brook that sings its melody to the night.
To know the pain of too much tenderness.
To be wounded by your own understanding of love;
And to bleed willingly and joyfully.
To wake at dawn with a winged heart and give thanks for another day of loving;
To rest at the noon hour and meditate love’s ecstasy;
To return home at eventide with gratitude;
And then to sleep with a prayer for the beloved in your heart and a song of praise upon your lips.
Posted by Crysse at 7:49 PM

Thanks for a great summing up! LOVE the poem at the end. Just perfect. Happy New Year!

A very belated thankyou for your comment - I only realised last week that the new format offers this option! Yes Kahlil Gibran writes beautifully of all things important in life. Take a look at his reflection on children - it begins
Your children are not your children
They are the sons and daughters of life's longing for itself...