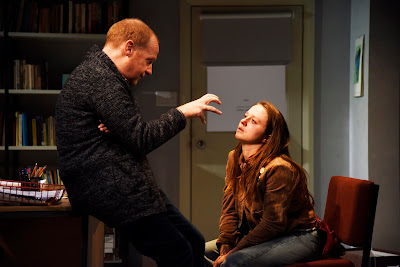 The dramatic event of this week was for me was review tickets for a theatre show again, after nine months' abstinence. Theatre Royal Bath had proudly announced its 'Welcome Back' season after the first lockdown, only to be closed down again before the second of their trilogy could make the stage. Oleanna is the now showing and -fingers crossed- will continue until 6th January at the Ustinov studio, with exemplary safety & sanitation provisions. First produced in 1992, David Mamet’s controversial play is about a dedicated professor whose attempt to inspire confidence in a panicky student is maliciously reinterpreted by a posse of ferocious neo-fascist feminists - or possibly a play about a complacent professor whose attempt to dominate a vulnerable student is thwarted by female solidarity... 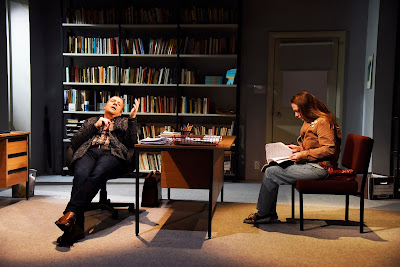 Jonathan Slinger as the maverick professor is superb, totally credible whether prickling with frustration on the phone or calmly confident of his offbeat educative skills. As the ambivalent student, Rosie Sheehy has a baffled belligerence that might well  appeal as a challenge to a dedicated teacher. Directed by Lucy Bailey, with a set by Alex Eales which ironically evokes Educating Rita in its scholarly intimacy even as this becomes increasingly at variance with the action.  Oleanna was iniitally seen as an important breakthrough in acknowledging an elephant in the room of sexism: thirty years on there seem to be other questions: The tutor advocates challenging the system, but is avid for personal advancement within the status quo. He may not a sexual predator, but he's certainly a hypocrite. images Nobby Clark 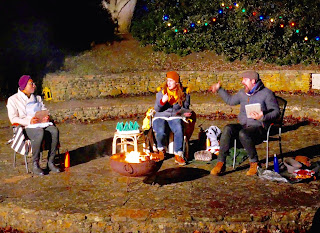 And now to Frome's Merlin Theatre for a dramatic contrast: As part of the Signal Fires project to revive small theatre companies in these difficult times,  New Old Friends touring company 'producing engaging, accessible, shows that make people laugh' brought their current show Crimes Against Christmas to the amphitheatre stage on Thursday, and a resilient cast of three persisted in entertaining their entranced audience huddled- in a socially distanced manner - on the stones with mulled wine, by recounting a complex Agatha-Christie stylee saga, in complexity and unlikeliness of a multiple murders to coincide with the story of the twelve days of Christmas. As with all such sagas, it's the deftness, and deliberate undeftness, of the multi-tasking characters that provides the entertainment.

And finally in this disparate trio, Wardrobe Theatre hosted 'the world's first interactive pantomime (possibly)' when Streaming Beauty zoomed out on Saturday night. As with all pantos, even the most salacious, the focus was flamboyant entertainment and the storyline was of scant interest. Technically, this was ambitious and amazingly successful, with Tinkerbell the technician creating subgroups in the audience to interact with the cast as Beauty struggled to sever her contract with evil Hymen Bowel. A cameo appearance by Blaise Castle to encourage us to co-create a dreamcatcher to break the spell gives some idea of the inventive absurdity. Zoomers from Bristol who know each other, and probably know the cast too, will have enjoyed it most but it's great to see innovative approaches to interactive drama in these drab days. 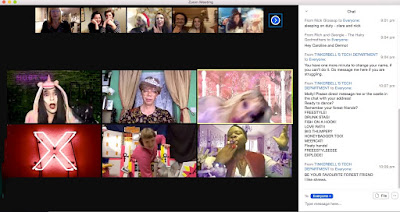 Also in a seasonally festive vein,  Black Swan Arts held a pop-up market of  collectables and giftables in the courtyard, cafe and Round Tower.  The 'Small and Affordable' display of delights included jewellery, ceramics, woodwork items, prints and original artworks, and more, including salted caramel brownies in the cafe.  Here's artist David Davis with one of his stunning local views.
Still local-ish, Heart of the Tribe has an exhibition in Glastonbury, enterprisingly creating an online gallery tour, showing until January. 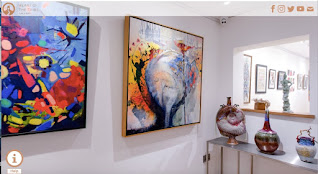 Ending with poetry, and a short video of six poets responding to a sculpture in Mid Wales Arts Centre. Steve Pottinger and Emma Purshouse were among this group and, as both poets have performed in Frome to great acclaim, even though they're based in the Black Country this film earns its link. Here's a couple of screen-saved snaps to show the quality of the film: this kind of project might appeal to local poets too - Millennium Green, maybe? 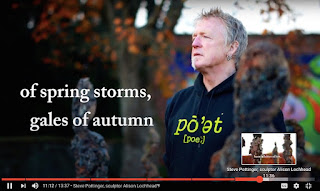