Opening again with drama! Enterprising performances  despite these stop'n'start lockdowns and the catastrophic effect on theatres, starting with a live production at Frome's Merlin: Bea and the Winter Winds, whipped up by Black Hound Productions in a short space of time and despite cast changes, is a delightful folk-tale-inspired story of the triumph of good over evil as a brave girl sets off to break the spell of constant winter so the community feast can be held once more... 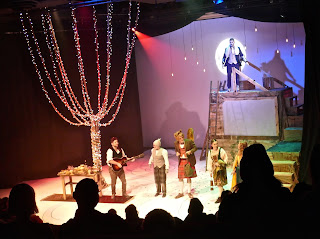 So, with their land withering in the thrall of Jack Frost (Pete White), young Bea (Anabella Fairgrieve) sets off to find the the imprisoned ‘good fairy’ (Amy Morgan-Bell). Of course she has helpers: a greedy squirrel and an narcoleptic mouse (Patrick Withey and Tiffany Rhodes) who intermittently steal the show with their entertaining comedy. And of course, they succeed in their quest. Patrick Withey and Ben Hardy-Phillips devised the storyline, Patrick writing the script and Ben creating the songs: the musicality is delightful throughout, as Bea has a fabulous singing voice and her guitarist brother is played by Ben, a popular local performer. Visually, it’s enchanting: the set design by Patrick is superb, featuring a semi-realistic tree and fantastic snow-swirls on the stage, which William Holmes’ lighting design plays on exquisitely, changing illumination on the branches and creating snow crystals on the imaginary drifts.  Evocative of memories for older viewers, exciting and comforting for younger viewers, entertaining for everyone, Bea and the Winter Winds is a huge success for the company and for the Merlin Theatre.  (As a footnote, Nevertheless Pub Theatre followers will remember Tiff as a Jane Austen heroine in Time Slides, our 2016 Frome Festival production... So good to see young performers continuing in the profession despite all problems.) 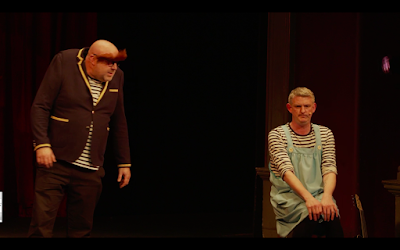 Beauty and the Beast from Living Spit onstage at Bristol Old Vic was about to open when Bristol moved into Tier 3 and tickets for the show were transferred from live to streamed audience. (For anyone confused by the image above, beauty is the one on the right.) Stu Mcloughlin and Howard Coggins seen live have a wonderful and chaotically distinctive duo-persona that doesn't totally transfer to screen. Perhaps we're used to comedians with the kind of subtle self-awareness of The Richardsons on our TVs, or perhaps a stage feels less magical when filmed close-up, but it's not until after a monologue introduction, a clunky role-changing first act, and a quiz, that this became really entertaining.  And when it's good, it's very good. 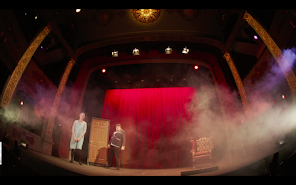 Filmic tricks help - as in this screen shot - but more importantly the script begins to make life connections. 'I wanted someone else to know how I feel...' whines the beast in defence of his imprisonment of Belle. 'You have no idea how it feels to be this beautiful,' she counters, 'To know everyone wants me, whatever room I walk in...'  The absurdity in this case doesn't make this concept less thought-provoking, and when Stu sings his melancholy song about Stockholm Syndrome ('It's not going to happen to me...') another huge social issue is covertly identified. This unexpected depth in the story interpretation increases the interest immensely, and the bursts of filmic trickery do too... Make what you will of the ending - in which Beauty can accept her partner as only by pretending he's still a beast - there's some great comedy and provocative opinion in the mix somewhere, but served only in thin slices.

And now another churlish individual redeemed: Artsreach, the Dorset-based organisation bringing performance to rural areas in the southwest, is promoting a one-man version of of that classic Dickens tale A Christmas Carol on Youtube, as narrated by David Mynne. David was a co-founder of Kneehigh, so it's not surprising this is a more-than competent adaptation, gripping from the start. With minimum props - a couple of scarves and atmospheric lighting - David evokes all the extreme drama of the action and morphs convincingly through a wide cast of characters. Purists might complain that the ending is slightly altered, but it's a tour de force of narration, and never fails to grip. 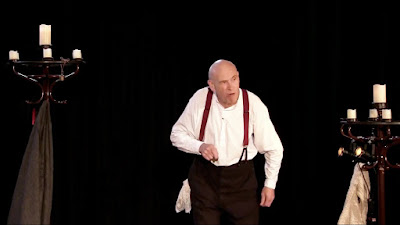 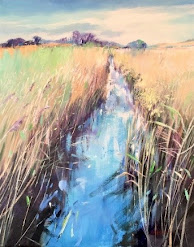 Pound Arts Open 2020 has transferred the 12th Annual Visual Art Exhibition to Flickr, so if you can't get to this gallery in Wiltshire, you can see the 60 wonderful artworks here. This is Wilderness at Benham: apologies to artist John L Harris if my screenshot doesn't do justice to the colour tone or brushstrokes, but you can see it's very atmospheric. The exhibition can be viewed till 23 January.

And finally, music... Sadly the session planned for Saturday's Frome Market was cancelled, but musicians are resilient and many gems have been posted online - you probably have your own favourite groups to follow - Open Micsolate & Postmodern Jukebox are two of mine - but if you haven't already, do click and enjoy Patrick Dunn's Gaudete.  A Tier-2 Triumph. 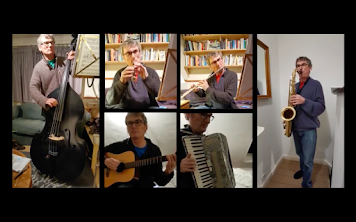 Good to see how much has been salvaged from the chaos that's the end of 2020!