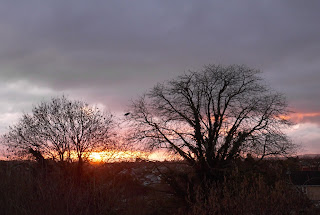 A January sky for this first post of the new year,  evoking for me a much-loved song from 50 years ago:  Lindisfarne's January Song with its melancholy repeating chorus 'you need me need you need him need everyone... '

As we look ahead with trepidation on so many issues, its good to note that Frome is maintaining its determination to hold on to as much of its ancient land and green lungs as possible. Developments are still encroaching but one at least has been held off for now - the Friends of Easthill Field continue to argue for the survival of this special sanctuary - and now have a logo designed by Steven Jenkins of Hogweed Pottery. (click the group name to find out more and join this public group on Facebook.) 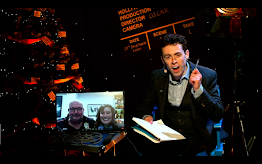 Last year offered us all new experiences and one of the least distressing was 'streaming', previously associated mainly with colds, but now an online activity with an advantage over that other chameleon verb 'zooming' since furtive fidgeting & refill trips remain unseen. It's especially good for drama.  Mischief Theatre are renowned for their plays That Go Wrong - their catastrophic Peter Pan was fabulous - so Mischief Movie Night In! -"a hilarious improv delight" - sounded great. 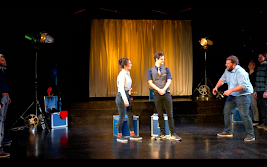 A screenful of audience decides the title, genre, & location of the night's tale, though not the plot which is controlled more by time than story-arc, so it all comes down to the compere to move the romp along, interrupting to steer and underline the funny bits in our tale of vampire love. It's an ambitious concept: all the talented young actors involved deserve credit, and it should at least encourage more appreciation of playwrights in future days, if theatre survives. 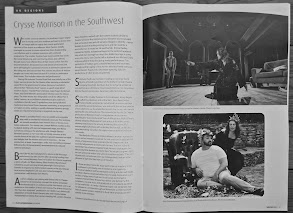 And the theme of survival segues with this double-page article in Plays International, which - though of course impossible to decipher - is my autumn report on theatre in the South West, which was one of only 2 UK regions creating enough performance to submit. Performances were filmed, zoomed, streamed, open-air, with even a few indoors though with massively reduced audiences. The image at the top is the live+live-streamed Hedda at Bristol Old Vic, and underneath is Bottom's Dream as created by a scratch team of young professionals on the amphitheatres of Frome's Merlin. 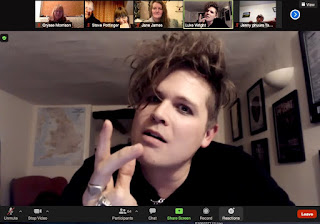 Poetry, with less overheads, survived better than drama, encouraged by ongoing initiatives like Liv Torc's HAIFLU and the King Lear email contests for oldies. Poets Prattlers & Pandemonialists began this year with an excellent zoom session with eleven Open Mic readers and a guest spot from Luke Wright, who can chicane from bitter ironic wit to eye-moistening poignancy and back in eight poems. For fans of Blackadder's Georgian series, Luke has rewritten the bawdy ballads of those days,  and this link will take you to more of Luke's poems.

So, welcome little 2021, all box-fresh and hopeful...  the poem that usually ends this first blog-post of each new year is Brendan Kennelly's marvellous evocation of hope Begin - do click this link and listen to the poet read recite it - but for this year I'm ending with the words of Tennessee Williams, in an interview recorded in 1982, because it feels like they have never been more important than now:

"The world is violent and mercurial - it will have it's way with you. We are saved only by love - love for each other and the love that we pour into the art we feel compelled to share: being a parent, being a writer,  being a painter, being a friend. We live in a perpetually burning building, and what we must save from it, all the time, is love."