Habits of art & writing, to warm a freezing week 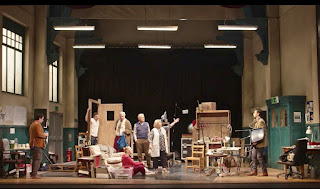 It's almost the law, or a by-law at least, for a writer to be a fan of Alan Bennett but having never really appreciated the 'darling of middle England'  I hadn't planned to invest in Original Theatre Company's screening of The Habit of Art, but as the freezing fog continued and news shifted from dismal to dystopian, with live theatre  off the menu for the foreseeable future, the option became more appealing. 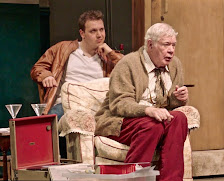 So I'm happy to report it's immensely enjoyable, whether or not you know much about WH Auden or Benjamin Britten, whose relationship is the central strand of a play that's witty, moving, and very funny. The dramatic structure of a-play-within-a-play allows for a double helping of personalities, with sharp contrasts in tone & mood - and also ensures the audience can enjoy quite a few full-stage views rather than just close-ups.  Two of the 'cast' are played by temporary stand-ins - leaving scope for comic cameos worthy of Shakespeare's mechanicals  - everyone dislikes their role and has their own ideas about how to play it, while the writer is furious at the producers' cuts. Yet through all this, the habit of art is maintained, and the habit of the habit of loving too. 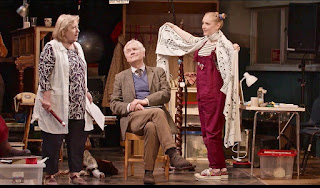 In a strong cast, Matthew Kelly and David Yelland were convincing and moving as the actors playing the poet and the musician, both lives dominated by the illegality until 1967 of homosexuality. The mood of the story ranges from emotionally charged encounters and arguments - between actors, the characters they play, and the playwright) - to comedic moments as stand-ins act as items of furniture with all the panache of Shakespeare's mechanicals.  Available here till 28 February, recommended. 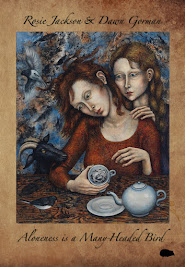 Aloneness is a Many-Headed Bird is the intriguing title of a collection of poems by Rosie Jackson and Dawn Gorman, who wrote in collaboration to create "a conversation in poetry between two women about things that matter in a deranged and damaged world."  Hedgehog Press has published this, and the two poets hosted the book's zoom launch on Thursday. Elegantly introduced and perfectly pitched by the hosts, this event gave a taste of the collection by reading ten poems and discussing the shared experience of collaboration. Originally combining to explore 'what it felt like to be an older woman', the poets had found that, as with a play, 'other characters had wandered in.'  The poems dig deep: darkness, bloodlines, death,- and love.  'We are capable of more love than we know' Dawn found.  Also fascinating was the story of their quest for a cover illustration, revealed by cover artist Gina Litherland, who joined the launch from her home in Chicago. Copies available from Rosie or Dawn. 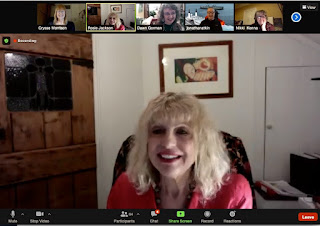 No music to report this week - a sad omission so here's the Unravelling Wilburys' fabulous version of the Dylan song If Not For You - it's on dropbox so I hope the link works for you.

And if you haven't already included this site on your search for uplifting posts on facebook, do follow Chris Packham's Self-Isolating Bird Club which daily provides images of wildlife - mostly avian - to bring a smile to your morning scrolling - owls, kingfishers, finches, tits,  robins... this one's actually mine, spotted in Rodden Meadow.

And Liv Torc has put out another callout for Haiflu in response to this latest quasi-lockdown, so do share your thoughts & feelings, in 17 syllables, on her page here.  (If you forget the 5-7-5 format, it's like this: Catkin colonies / along the road to Nunney / chubby with new hope.)

Ending, courtesy of the Fortnightly Review - always an excellent miscellany of poetry and fiction - with a poem by Johanna Higgins called Ghost but could might well be called Now.

It's the breathing out that kills
The drawing in throughout
The love that spills.
The reddened love
That
Turns and tears
At flesh, at
Some adhesion,
Where the blood meets
Ghost and reason.