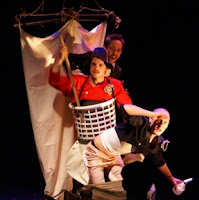 Shortly after the start of Napoleon - A Defence, the new production by Devon-based clown group Le Navet Bete at The Brewery, the man in the seat next to me murmured to his companion "I don't think we can rely on this for historical accuracy." The cast were at the time enacting a motley group of french supporters learning to march in a manic cancan, while Wellington despatched his 'master of disguise' Major Blunt to capture the Emperor disguised as a standard lamp. History's loss was audience gain:  fast-paced slapstick, impressive circus skills, hilarious costumes and cross-dressing, fireworks and french fancies. All fabulous fun ~ definitely a company I'll be watching again when they bring their next show to Bristol.

The Bristol Old Vic website has a charming trailer for Complicite's Lionboy which gives the impression of exquisite visuals to support a hero's journey of the imagination like Pi's travels with his tiger.  It's actually more bland than that and less fantastical: an adventure yarn with a good oldfashioned Wizard of Oz ending ~ home is where the heart is. Based on a trilology for children by Zizou Corder, the story of Charlie Ashanti's quest to find his kidnapped parents and save the world from the evil Corporacy is largely narrated direct to audience by the cast of six (four men and two women, and a male drummer. I mention this because there's quite a blokey feel overall despite the female writer and director.) Sometimes there's a spoofy James-Bond-meets-Dr.Doolittle charm ~ with a touch of Harry Hill in the fight!-fight! showdown between Charlie and the Corporacy ~ but apart from a genetically modified cat called Sergei there's little humour and the script tends to repetitive explanational simplicity. Best bit is a dazzling sequence in the first half when Lisa Kerr as a pirouette creates the glamour and glitz of the circus, and atmospheric shadows often enhance the action but I'd have liked a little more tension and verve... it's a family show of course and I had none of that target audience with me, but I did wonder if they might have agreed with the little boy in the audience who, when comments were encouraged from the stage, suggested 'boring.'

In Frome, Toolshed's intimate little gallery is featuring Our Turn, Georgie Manly's collection of little fluffy balls on a catlit base, while  the new exhibition at Black Swan Arts is Mark Karasick's intriguingly entitled show  if you could see what i see through your eyes. Words at the Black Swan poetry group will gather under the guidance of Rose Flint on Sunday at 3.30 for a one-and-a-half hour workshop ~ this session costs just £4 and is open to new members or interested droppers-in so do come if you're in Frome for the Cheap Street Fun Day.

Final footnote: my short story/poetry anthology are we nearly there yet? is now on kindle.
Posted by Crysse at 6:14 PM