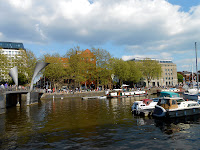 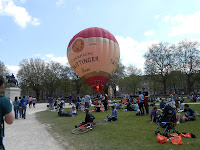 Bristol's theatrical MAYFEST is over for another year, ending on a blue-sky high with champagne and balloons in Queens Square while sounds of Happy Mondays (live) float along the dockside. I didn't see many shows this time but did catch the Saturday matinee of utterly awesome Valentijn Dhaenens' monologue Bigmouth at BOV Studio, en route to Soho Theatre via Belgium, Finland and Edinburgh collecting awards and accolades all the way. The notion behind this SKaGen production is uniquely simple: extracts from public speeches made in situations of confrontation over two thousand years are combined in a dramatic medley of courage, bravado, optimism, resignation, inspiration and bigotry, with the only common element a passionate self-certainty. 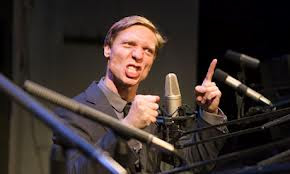 From Socrates calmly defending love over might when sentenced to death in 399 BC, to George Bush promising vengeance for the Twin Towers (mingled with similar sentiments at the New Orleans disaster as if the hurricane too had been launched by muslim terrorists), this kaleidescope of historical fragments includes Malcolms X and Luther King,  bin Laden, Kennedy, Reagan, Goebbles and more including obscurely Pericles and Republican political commentator Anne Coulter, whose bigotry is so absurdly extreme I wouldn't be surprised if she claimed she could see Mecca from her bedroom window.  In what's rightly been acclaimed as a power-house performance, Valentijn uses only a long desk with a row of mics to recreate their words, sometimes with translation and always with extraordinarily convincing accent and tone. For coherence, there's a blackboard style projection list from which each name is erased when Valentijin moves to the next. Some speeches are given solemn gravitas, like Osama bin Laden's 1996 fatwah against America which is couched with unexpected dignity; some are darkly comic, like the contrast between Goebbles' quiet menace and General Patten's rowdy vulgarity. Some juxtapositions surprise, like the celebration of Congolese independence immediately following a sanctimonious abdication speech by the Belgian king. “We’re going to make the Congo the centre of the sun’s radiance” Lumumba promises, chillingly evoking Coleridge's ironic words in Ozymandias:"Look on my works ye mighty, and despair." Nothing beside remains...
There's electrifying musicality too, through sound design by Jeroen Wuyts (who also created the atmospheric lighting) and US presidents rattle off their histrionic pledges over a fastpaced dub version of I like to be in America...  How do you end a tour de force like this? Valentijn's choice is to descend to the audience and sing Nature Boy, acapella, following the words on his blackboard like a child at a panto, repeating the final lines: The greatest thing you will ever learn is just to love and be loved in return.  He left the full-house audience reeling but not too stunned to cheer throughout his three curtain calls. Five stars.

By contrast the Bristol Old Vic evening show by Clod Ensemble fills the stage with people and movement for their polished, self-assured, performance Zero, wordless apart from a specially-composed musical score performed live, and occasional topical soundbites. One of these was that gone-viral Youtube clip when the guy pushes his reluctantly-rope-swinging girlfriend off the cliff, though deprived of its famous “I just got dumped!” final line. Maybe they didn’t want specific outcomes for their 'Tragedy in 5 Acts' which seemed to be generally about frustrations and accumulative damage of relationships. Life's a bitch, and then you die, as Bertolt Brecht put it. I think you can buy that on a mug, too.