This week started with a blistering row - between my characters, that is - and discussions on music & costume... then the first part of the set arrives... full setup in hectic get-in at The Cornerhouse and looks amazing. I'm loving being involved with all this but no spoilers before our opening TONIGHT! 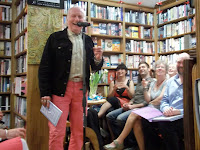 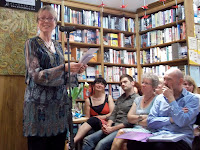 Between rehearsals for MASCARA and promoting the show I haven't managed to do much else this week but happily I did get to Toppings in Bath for the launch of Liz Brownlee's amazing book Animal Magic. This is the most extraordinary poetry book you'll ever read: Liz's meltingly beautiful words about some of the world's most fascinating creatures are interspersed with careful research telling simply the facts of their endangered lives. It's published by Iron Press, whose editor Peter Mortimer always gives so much support to aspiring writers ~ as I know from personal experience, as some years ago I sent him a story which he liked but declined to publish as he said it should have been a play. I rewrote it as a radio script, and it was subsequently broadcast. Peter had travelled all the way from North Shields to tell the crowded bookshop that 'of all the books I've published, this is the one of which I've been most proud.' A due accolade and a lovely event. 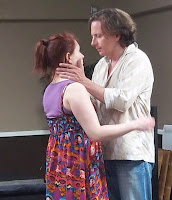 And my footnote for this posting has distinct, if tenuous, connection with this final image from MASCARA rehearsals: I've been reading an interview with actor Samuel West in which he says his favourite line of Shakespeare is the opening of Richard II's soliloquy in prison as he reflects on life and loss, his body constrained but his mind roaming, finding new identity as he tries to forgive the people who have wronged him. Parallels with my imprisoned character/s aside, this speech was the internal soundtrack to my teenage years. I read it, and the deposition scene that precedes it, so many times I knew them by heart. Even these days, get me started on 'Your cares set up do not pluck my cares down' and you may have a wait a while before I stop reciting. So Richard II is an intensely personal play to me, but as Samuel West points out it's modern too in its honesty about society nominating people to be 'kings' & telling them they're semi-divine, only to kill them.
Posted by Crysse at 6:00 AM

I strongly recommend this. A very strong media and social critique that made me re-engage with my gut and soul.

Thank you so much, Crysse, for making my stay in Frome a pleasant one and forget the small "hole" it is.

Am off to start my new fellowship in Nelson Mandela Metropolitan University, South Africa.

Have an amazing time in South Africa, Alon ~ I'm sure you will. xc