Bristol-based theatre company Living Spit is fulfilling its mission statement 'to make poorly researched historical comedy-drama shows about people that at least one of us vaguely looks like' with The Six Wives of Henry VIII, at Bristol Old Vic till May 12th. Howard Coggins looks uncannily like Henry VIII. Stu Mcloughlin doesn’t look like any of his wives, or anybody’s wife for that matter... Believe me when I say it’s not a problem. This comic duo sustained meta-theatrical, quasi-historical, belly-achingly funny absurdity for a two-hour animated lecture which rarely flagged for a moment from the hilarious start as they introduce themselves via a duff review from their previous show. Much of the mirth comes from blatant irrelevancies featuring the allegedly fractious relationship between the two performers, and from anachronisms like the brilliant Catherine Howard-and-the-lie-detector sequence, and Henry's mobile phone calls: "Popey! ... need an annulment, mate..." Nice use of exposition too, as when Jane Seymour, docilely embroidering a cushion with Battersea Power Station, consoles her spouse for his various “rash decisions notably involving decapitation and inventing your own spin-off religion”. Like all really successful comedies there are plaintive notes too, as we see Henry's father disdain him in childhood and torment him in dreams... a wonderful show which, as Howard repeatedly and grumpily points out, deserves a wider showing than the BOV Basement - but do catch it there while you can.

This is the draft flyer for Mascara (doesn't matter if you can't read the performance dates, that's the bit that needs tweaking) which I think looks great. Press copy from the director reads: A young journalist researches the notorious Natashcha Kampusch Austrian kidnap case. As her obsession grows, it reveals a frightening web of connections with her own life. A darkly comic, tender and shocking love story.“A powerful and haunting story beautifully told” said Sarah Dickenson, Senior Reader at the Soho Theatre.
It's all getting terribly exciting. I sat in on the set design meeting with Ann Stiddard and met lighting engineer Luke Murray, both with nerve-tingling ideas for the visuals. Ann is taking the kidnap scrapbook as a starting point for her concept, moving away from a literal room to a living space that evokes the differences of perception at the heart of the story... sounds fabulous. And now the team has come together, rehearsals start next week! 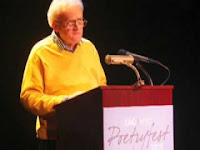 Perhaps I should have taken a look at Paul Durcan's poems before blithely buying a ticket to hear him read at the final event of the Bristol Poetry Festival. I've made some great discoveries that way - Don Paterson, George Szirtes for instance - but this time, apart from one quite nice poem to Seamus Heaney and a few startling phrases like days of slapstick loneliness I sat through 50 minutes of undiverting, sometimes sneeringly judgmental, anecodotal trivia. If this guy in the custard-coloured jumper had been holding forth to strangers in a bar I would have edged away till out of earshot, and his enthusiastic reception at the Arnolfini baffled me. Blimey, the performance poets last week were ten times as lyrical, witty, and poignant too. Memo to self: avoid national treasures.
Posted by Crysse at 12:00 PM