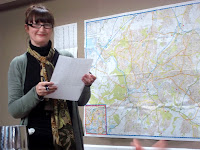 Ann Stiddard and Alison Comley who founded and lead Theatre West, launched their 2012/13 'new writing' project on a blustry Bank Holiday Monday at The Hen & Chickens with conviviality and pizza as well as complex instructions involving a big map of Bristol and much A-Z grid referencing. 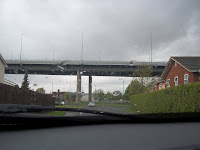 All the writers - there are thirty of us - drew random coordinates to find our dramatic locations and then dashed off in pairs to find inspiration and make videos of the area. I drew just off Portway next to the motorway, a largely-deserted street of unimpressive modern houses. And a rook, flapping low and slow over wet grass. "It can be anything from a specific siting to a feeling of emptiness" Alison says. Hm. I'm currently pondering outsiders... strangers... I'm-leaving-home-bye-bye.... Then a very jolly feedback session as everyone shared their impressions and pledged to get started on their script submission, due in just over a month... eek! 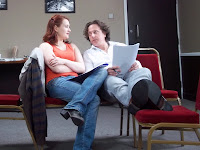 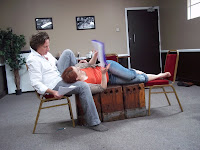 Rehearsals for Mascara are now underway and I'm absolutely delighted to watch as Ollie and Livi breathe life into my characters. "Possibly the best first read-through of any show I've ever been involved with," says director Steve. And from then on it just gets better.
Participating in rehearsals is an amazing learning process for any writer, so I'll be driving into Bristol as often as I can until we preview in Frome on May 25th before opening night at the Alma on Tuesday 29th! 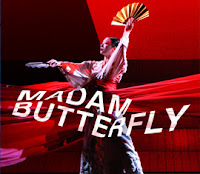 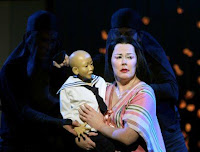 Not a footnote but a grand finale for this week's posting: even though both performance and music are prime passions for me, I've never fancied going to an opera. And I wouldn't have seen one now if I hadn't been treated to the revival of Anthony Minghella's production of Madam Butterfly, a spectacularly sumptuous visual extravaganza immaculately performed by ENO. I say ENO in this casually familiar way but actually I was so unaware of the role of English National Opera that my initial response to the barman's logo was to think how nice that a posh place like this could let an ambient music fan wear his own teeshirt... But no-one, not even the most recalcitrant culture-vulture, could fail to be moved by how exquisitely the story is revealed, especially by the delicate creation of the child-puppet for the final scenes. The emotion lingers long after the final chords, and I woke next day with music in my head ~ not Puccini actually but Sonheim saying much the same thing: when love comes so strong, there is no right or wrong, your love is your life...
..
Posted by Crysse at 9:00 PM